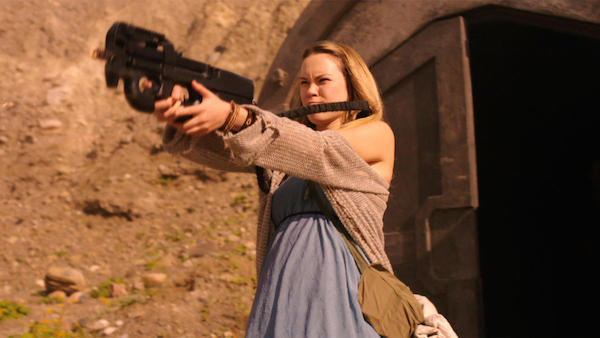 With each episode of Killjoys, the richness of the history and class system of the Quad gets cemented. Which is a great thing. The creators/writers have done such an excellent job with the social backdrop of Killjoys that whenever a new nugget is revealed about Qresh, Westerly, Leith or Arkyn (the latter is still a dark horse) – excitement ensues.

You could say this week was about surrogate mothers or vessels as they are called (as is the episode). Evidently it’s gauche to carry your own child if you are one of the Nine on Qresh.

The show opens with D’Avin trying to get his first collar. All three are chasing the warrant, the guy ends up trying to do some groovy parkour moves but unfortunately parkours his way onto some electrical lines and explodes – which counts as a collar evidently.

Dutch is approached by one of the Nine, a woman names Delle Seyah Kendry. She wants the Killjoys  to transport a “Vessel” named Constance to Qresh. Constance is carrying the last of the Lahani bloodline and needs to arrive unmolested on the planet to give birth. If she doesn’t war may break out. While this fancy-pants Kendry is talking to Dutch, she asks her why a low-born such as Dutch possesses such a beautiful musical instrument (it’s hanging on the wall). Dutch says it came with the ship. Now we know that ain’t true. That girl has some serious secrets.

So off to get the Vessel they go. They run into nuns with guns, a group of killers trying to off Constance and conspiracy galore. At first sight, all the vessels seems super girly but when they are attacked, they arm themselves from the gun locker like pros! During all the hubbub and killing, Dutch makes an off handed comment about being in a royal harem. Hmmmmm

Dutch, D’avin and Jon get Constance to Qresh space and are denied entrance in – so it’s obvi that one of the Nine wants this bloodline cut (which was actually obvi before when they sent killers after her). It seems that Kendry may be among these folks.

The Killjoys land their ship anyway just as Constance gives birth, so the baby is in fact born in Qresh space and the Lehani bloodline is preserved. Kendry isn’t happy and even tells Dutch that she’s made things difficult but in the same breath says ‘Welcome home, little one.’ Of course, Kendry now wants to know everything on Dutch.

The episodes ends with Dutch staring at the musical instrument on the wall of her ship. Oh, do tell! Please!

Next week on Killjoys on Syfy Friday, An easy salvage job turns deadly as the Killjoys are forced into a standoff with their deadliest enemy yet, their own secrets.