KILLING EVE Recap: (S02E06) I Hope You Like Missionary!

DISCLAIMER: This Killing Eve recap contains more spoilers than the number of trendy blazers Villanelle owns. Our favorite psychopath is always abreast of the latest fashion trends. You’ve been warned. Proceed with caution.

Welcome back, Killing Eve fanatics! Can you believe we only have two episodes left of the season? Eve’s team is finally closing in on serial killer Aaron Peel, but first they need the skills that only Villanelle can provide. Villanelle attended AA meetings undercover in an attempt to foster friendship with Aaron’s sister Amber. Keep your enemies closer, they say. However, Villanelle broke under pressure during dinner with Aaron and his sister. Aaron may be well-versed in the art of bullying, but crossing Villanelle was his biggest foible. Villanelle is the reigning champ when it comes to power plays. Meanwhile, Eve administered a power play of her own when she found Niko canoodling with a teacher colleague.

Alright, let’s delve into “I Hope You Like Missionary!”

We open with Niko (Owen McDonnell) barging into his flat sopping wet from the rain. Eve (Sandra Oh) is taken aback by his bold entrance. He informs her that he met Villanelle, and that the latter disclosed the details of Eve’s Parisian visit. Naturally, Eve reminds him of Villanelle’s questionable mental state, but Niko believes our favorite psychopath. He asks Eve if she enjoys being frightened, if she enjoys being dominated. The two head upstairs for some kinky tangoing. Hormones are all in a frenzy, folks. Villanelle (Jodie Comer) observes outside in the pouring rain, presumably jealous and wishing she were Niko right about now.

Later, we see Eve happily brewing coffee the following day. Niko hesitantly enters the kitchen. He explains that while he enjoyed the previous night’s escapades, he wants to move out. Niko pleads with Eve to refrain from stopping him. Well, that escalated quickly in the the worst way possible.

Next, Eve meets with Carolyn (Fiona Shaw) for breakfast. Carolyn shows Eve a video of Aaron Peel (Henry Lloyd-Hughes) being interviewed by a journalist. A camera is discreetly filming the interview inside said journalist’s bag, since Peel despises being filmed. However, Peel catches the camera, but insists the interview continues. Subsequently, Carolyn reveals a photo of the aforementioned journalist…who’s now dead. Carolyn believes Peel had this man killed. Just one more charge to add to Peel’s already growing list of charges. A Pharaday conference is taking place in Rome, and Carolyn hopes to have an MI6 presence there.

Then, Jess (Nina Sosanya) and Eve arrive on Carolyn’s doorstep with the intention of speaking to Konstantin (Kim Bodnia). They explain that they hope to enlist Villanelle in their services, but not to kill. Later, Eve meets with Villanelle at the latter’s new residence in London. She reveals the objective of this mission – infiltrate Peel’s inner circle by befriending his sister Amber. Amber attends AA meetings in London. Villanelle will begin attending said meetings herself so she can grow closer to Amber. Villanelle will be playing the role of New Yorker Billie, who developed a bad drug habit and holds multiple philosophy degrees. Comer is such a master at accents, so this should go off without a hitch, right?

Later, Villanelle and Eve confer with Carolyn on their next step. Villanelle is fascinated with Carolyn, recognizing the latter as the leader of it all, the one pulling the strings behind the scenes. A quarter master arrives with a suitcase chock full of gadgetry. Microscopic cameras, purses, you name it. Next, after the weapons meeting, Villanelle pops in to a cafe for an impromptu visit with Eve. She inquires after Niko, knowing full well she tipped the scales as far as Eve’s marriage is concerned. I’ve said it once, and I’ll say it again: Comer and Oh have electrifying chemistry, and that inherent attraction isn’t something that can be faked. 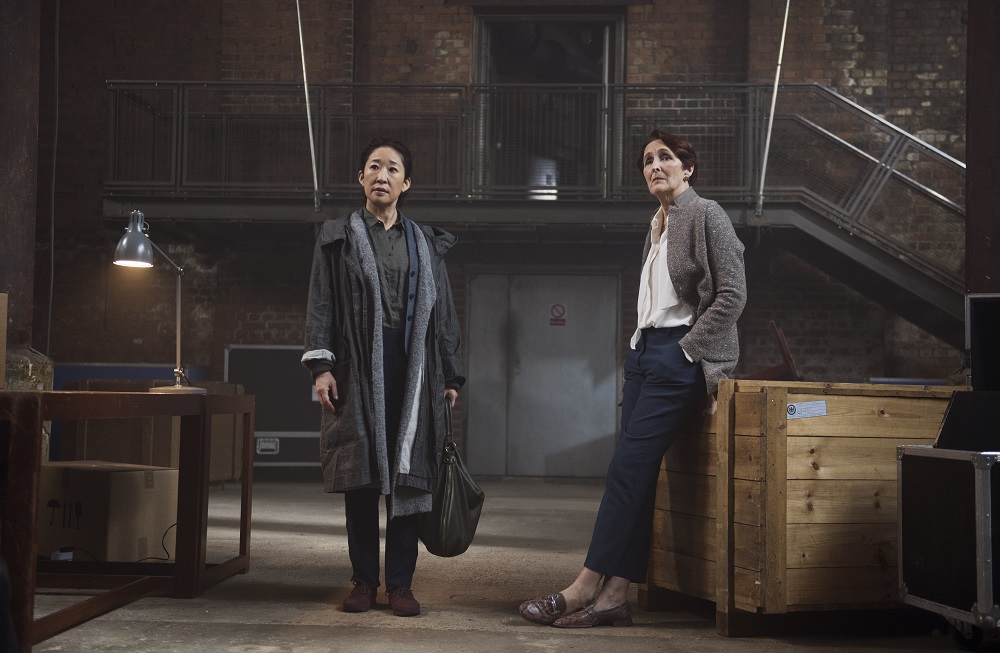 Next, we see a disguised Villanelle giving us her best Avril Lavigne cosplay. Amber Peel (Shannon Tarbet) is sitting a few seats down from Villanelle. When it’s Villanelle’s turn to share her story with the group, she takes the “woe is me” route. The leader of the AA meeting isn’t buying it. He mocks Villanelle for her feigned sob story. After the meeting, Amber approaches Villanelle with some sage wisdom. Tell the truth, and all will be fine. Villanelle, a.k.a. Billie, takes said wisdom to heart.

Then, Villanelle reunites with Eve at the cafe, who was listening in on the meeting from the start. Eve scolds Villanelle for adopting her story to share at the AA meeting. She mocks Villanelle for putting on a paltry performance. This is the straw that breaks the camel’s back for Villanelle, and she reminds Eve that she likes her, but not that much. Villanelle subtly threatening Eve is scarier than her actually murdering people.

Then, Eve decides to pay Niko a visit at his school. However, Gemma (Emma Pierson), Niko’s flirtatious colleague, flits to his side. Later that day, Villanelle delivers a heartbreaking monologue at her next AA meeting. Everyone buys her story. Afterwards, Amber reveals her hopes of meeting with Villanelle outside of AA. They begin setting a plan in motion, but Amber’s handler interrupts them. Said handler reminds Amber that she’s not to form relationships with anyone at her meetings.

Next, Villanelle approaches Amber’s handler. She urges the woman to relax her grip on Amber. Villanelle subsequently apologizes for putting her nose where it doesn’t belong and hugs the handler close. Suddenly, Villanelle pushes Amber’s handler into traffic. The woman is pulverized by an oncoming truck. Eve witnesses the whole thing from the cafe window. Amber arrives on the scene sobbing, and Villanelle embraces her newfound bestie. Yikes.

Later, Villanelle and Konstantin are having a nice walk and chat through the city streets of London. Villanelle reveals that she’s been texting Amber, and they’ve set a date that evening to have dinner. Naturally, Aaron will be present. Success! Meanwhile, Eve pops by Gemma’s house after learning that Niko is crashing on her couch. Suspicious, indeed. Awkward tension lingers in the air between the love triangle. Eve rushes upstairs under the guise of using Gemma’s restroom, but she sneaks into the latter’s bedroom for some proper snooping. She snaps off a miniature ballerina that was perched atop a music box.

Then, Eve rummages through Gemma’s bureau and makes a mess of its contents. Gemma catches her in the act. Eve subtly threatens Gemma and Niko barges in on the duo. Eve also sends Niko thinly veiled zingers, reminding him that nothing really is going on between them. Before departing, she reveals her “hope” to Gemma that she’ll enjoy the missionary position. God, Oh is such a tremendous talent.

Next, we see Villanelle is at the swanky Peel residence having dinner with Aaron and Amber. Eve and Konstantin are sitting inside a van outside, listening in on the trio’s conversation. Aaron pries into Billie’s life, more like an interrogator than anything. Villanelle, in turn, also asks her fair share of questions. Peel proves to be a proper bully in this scene. Villanelle excuses herself to the bathroom, but instead takes a detour into Peel’s study. She riffles through the books on his massive shelves. However, before she can really delve into her search Peel catches her in the act.

Then, the trio are seen playing a card game. Villanelle feigns innocence and asks several questions regarding the rules of the game. Peel begins to question Billie’s intelligence. He grills her on her so-called philosophy degrees. Eve grows panicked, and Konstantin informs her that Villanelle most likely didn’t do her research prior to the Peel dinner. Peel incessantly hurls insults at Villanelle. He asks question after question regarding her philosophical opinions. Amber sits in tense silence, observing the tiff between her brother and her new friend.

Finally, Villanelle calls Peel out for the bully he is. To her credit, Villanelle never breaks character. She takes one of Peel’s books and slaps him hard in the face. Peel believes his nose is broken, but Villanelle is storming out of the house. Konstantin urges Eve to let Villanelle cool off.

Later, Villanelle spots two girls inside a food shop. She proceeds to follow them outside, properly scaring the pair. The whole scene plays out like a horror movie, with the killer stalking their prey. Once they discover Villanelle, they ask her to walk alongside them as a form of protection. It isn’t safe walking outside at night. Villanelle obliges, but when her back is turned to the girls we spot that familiar s*it-eating grin of hers. Something dark is on the horizon.

Now, we know that Villanelle and Eve’s precarious alliance will be temporary. It has to be. To me, the show’s allure is the constant pull between Villanelle and Eve. Yes, their scenes are gripping, but I really dig those moments where they almost reunite. Where they’re so close they could be physically touching, like dangling a mouse before a cat. They don’t call it a cat-and-mouse thriller for nothing.

Do you think Aaron Peel is aware of Villanelle’s infiltrating? Will the final two episodes take place in Rome as MI6 heads to the Pharaday conference? What will happen with the Ghost? Join me as I continue recapping Killing Eve, here on Geek Girl Authority.

The upcoming base-building, survival game from @EXORStudios, The Riftbreaker, has a new Alpha update. The additions make for a good, challenging time.
https://www.geekgirlauthority.com/alpha-2-updates-to-the-riftbreaker-makes-survival-even-more-challenging/

Google has officially started a two-month free trial of Google #Stadia Pro for gamers with a Gmail account to check out. Here is what we think you should know before diving in! https://www.geekgirlauthority.com/what-you-need-to-know-about-google-stadias-free-version/

During self-isolation: you've tried baking bread, your place is spotless now, you’ve watched so much TV, what’s left to do? We put together a list of podcasts to listen to, depending on your mood! https://www.geekgirlauthority.com/podcasts-to-listen-to-during-quarantine-based-on-your-mood/

Our Geek Girl Authority Crush of the Week goes to none other than Buffy Summers! She's tenacious, loyal, and has courage in spades. Click the link below to read why we think she's crush-worthy!

Hey it's Thursday and tonight I'm playing #Overwatch with friends! Stop on by and say hi! Or drop in for a game or two!

Well, it's Monday and things are tough. Here is a