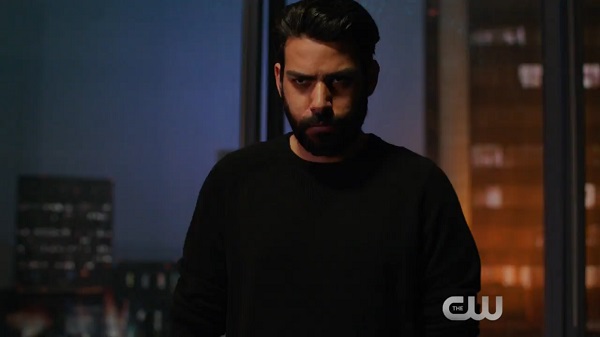 Bad news Supergirl fans: we won’t get another episode until April 24th. With just a handful of episodes left in the season, I guess we can appreciate the wait, but judging by the trailer for the next episode “Ace Reporter,” this is going to be a long, arduous wait.

While Queen Rhea is lurking over the Earth, no doubt plotting her next attack on Supergirl, there is a more pressing case that Team Supergirl needs to deal with. We are introduced to a new character, Jack Spheer (Rahul Kohli), a man who seems to be an important figure in National City, but who might not be who he appears to be.

Lena Luthor (Katie McGrath) is back for this episode and it looks like she is romantically involved with Jack. However with Kara looking into him, Lena might not like what Kara finds.  Snapper Carr (Ian Gomez) is also in this episode and he is looking deeply concerned about something. Could it be that Jack has killed people? For what reason?

“Are you trying to get me into your crosshairs, Miss Danvers?” Jack asks her, probably because he knows that she’s doing her research on him.

We see Supergirl in a predicament involving a rather imposing machine that traps her and Guardian beating someone up. Kara shows Lena something that’s she doesn’t like and she asks if anyone else knows, Kara and Mon-El see something shocking, Lyra (Tamzin Merchant) appears for a brief second, a car blows up, and Kara is caught in a blast so big that it burns through her clothes, revealing her Supergirl suit underneath.

“The truth is what matters,” Kara says in voice over. We’ll see how bad the truth hurts.

Check out the trailer below and we’ll see you in a month.