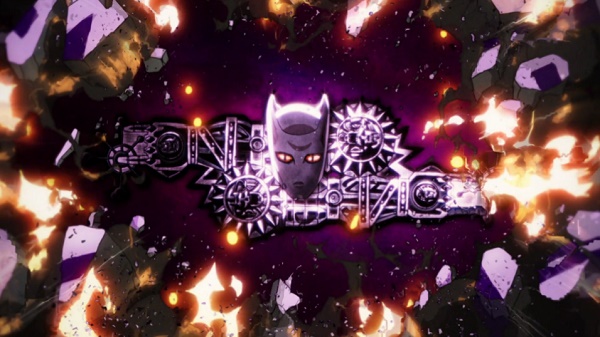 Hayato Kawajiri is caught in a loop. Cursed by Deadly Queen’s ultimate ability, Bites the Dust, the youngster has no way to rid himself of the serial killer who has taken his father’s place. Should anyone so much as ask Hayato about his tricky circumstance, they risk being turned in to a bomb. With their explosive death, the day resets, but their fate remains sealed; even if they don’t meet Hayato the next time around, they won’t avoid fatal combustion. So long as Bites the Dust is in effect, the cycle will continue and all who pursue Kira Yoshikage will meet a similar fate.

However, Hayato and Kira are conscious of the cycle. With each repetition, the child’s tactics shift while the serial killer’s confidence in his greatest ability goes unfazed. That confidence will be Kira’s undoing. He notices Hayato is acting peculiar through this version of the morning, seemingly trying to alter events. Kira cautiously follows his time-prisoner, trying to assess the kid’s scheme. Confidence is Kira’s game, and he can’t handle seeing Hayato acting so sure of himself. 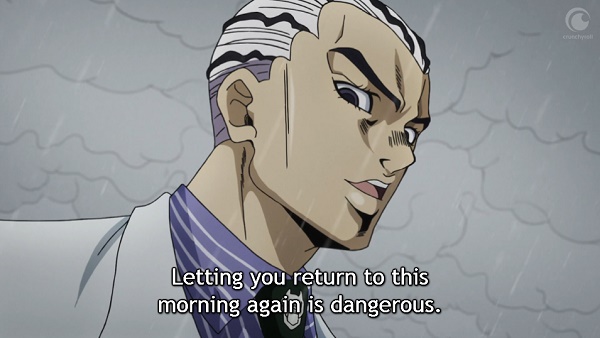 As the time to Rohan Kishibe’s fated explosion ticks down, Hayato’s confidence falters. Luck swings his way, as his apparent horror is exactly the cue Kira needs to come out of hiding. He strides up to Hayato, ready to rub in his usual spiel about the inevitability of fate when Hayato makes his play: a backpack full of Stray Cat. Shocked by the sudden sunlight, the malevolent cat-plant lets loose a volley of air bullets. One shot strikes true, right in Kira’s chest.

Hayato’s gamble seems to have paid off better than he’d ever hoped, until Kira staggers back to his feet, smirking. Hayato’s self assured screwing with events earlier that morning lead to Kira taking off his wristwatch and putting it in his chest pocket, right where the air bullet struck. The boy’s plan may not have killed Kira, but in breaking his watch he made manifest the metaphor for his true intent: killing time. Though killing Kira with a Stray Cat bullet would have been a desirable outcome, Hayato’s plan assumed the worse.

Using the morning’s wrong number phone call as cover, Hayato called the home of Josuke Higashitake, hopefully ensuring the teen wouldn’t sleep through his planned meeting with the Morioh squad. This true gamble does pay off. Kira, surviving the cat-bullet and feeling the fullness of his power over fate, loudly refers to himself by his actual name, and Josuke and Okuyasu arrive just in time to hear it. For maybe the first time in Diamond is Unbreakable, Josuke sees all the pieces of a puzzle laid out before him– the odd man shouting “Kira Yoshikage,” the familiar boy, the coincidental location– and immediately reaches the solution. 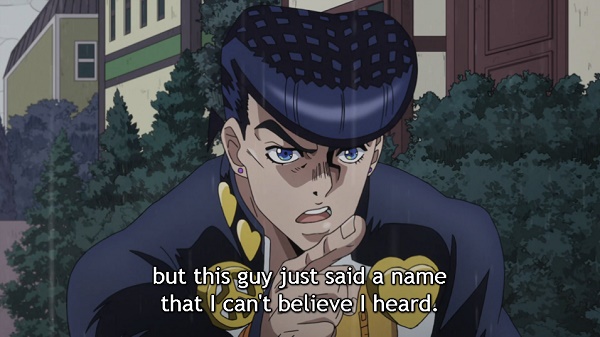 Josuke knocks Kira on his ass immediately. With Bites the Dust active, Deadly Queen isn’t available to defend its user. Finally, Hayato’s plan to prevent the explosive ends of Rohan and the rest of the Morioh crew pays off, as Kira is forced to call Deadly Queen back to face down these unexpected opponents. Josuke and Okuyasu are a fully synchronized duo, compensating for each others mistakes and countering Kira’s counters. Using his Stand The Hand, Okuyasu believes he has the upper hand, but Kira has a cat up his sleeve.

An explosion shreds Okuyasu’s torso and sends him flying. No one understands how Kira could do this without making contact, until they see the fullness of his deviousness. Assuming a truly Krang-like form, Deadly Queen opens its stomach, revealing a compartment in which it has stowed Stray Cat. Two Stands are now one, and by their powers combined Kira can launch nearly invisible explosive air bubbles. He now has the edge at range, and his bubble bombs can slip through any defense. 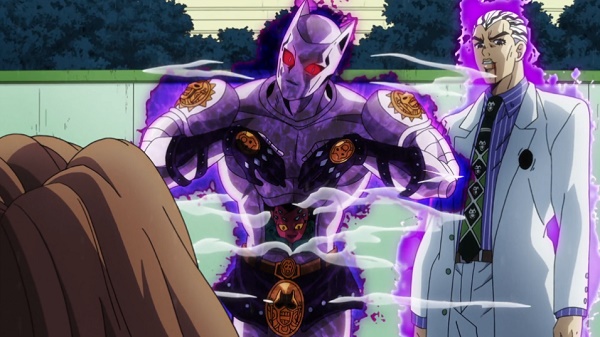 Josuke attempts forming protective walls with Shining Diamond’s ability to reform matter, but the bombs are too effective and he only gets a shoulder full of gravel for his effort. His determination to reach Okuyasu and repair his wounds leads him to an opening in Kira’s defense: he can’t detonate his bombs if he’s within the blast radius. Boldly charging toward his enemy, Josuke closes the gap and reaches his defeated friend, but nothing is so easy when Kira Yoshikage is involved.

Hayato suspects that Kira has already turned Okuyasu in to a bomb. Josuke might be able to heal him, but would be blown up in the process. As Josuke puzzles through his options, Hayato leaps to action, touching Okuyasu and taking the fatal blast. Josuke sees the boy’s play in time, and Shining Diamond puts his ashen bits back together, then sets to work on Okuyasu. This is another point in Diamond is Unbreakable where the limits of a power seem inconsistent. While Shining Diamond is able to reverse the death-by-explosion of Hayato Kawajiri, its established inability to reverse death holds true for Okuyasu. For the second time, Josuke repairs the wounds of someone close to him, but fails to save their life. 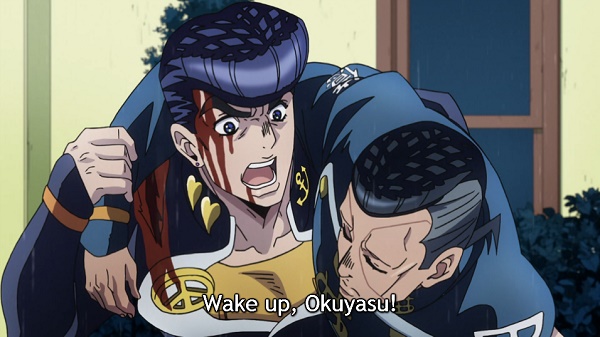 Injured and dragging his dear friend’s body, Josuke and Hayato try to make an escape. With a bomb-bubble creeping toward his face, Josuke whips a glob of his own blood with such force that it splits the bomb in two. This is no ordinary bubble, though. Instead of popping Kira’s weapon, Josuke split one bomb in to two. With not a moment to spare, Josuke levitates away from the explosion with Hayato and the limp body of Okuyasu in tow. He may not be able to heal his own wounds, but he is able to return the gravel in his shoulder to its original place in the pavement, dragging him away from harm in the process.

Outgunned and with one friend dead, Josuke struggles to reconcile the situation. The rain drowns out his pained cries, keeping his friends near, but impossibly far from the fray. And yet, the skies are clearing.