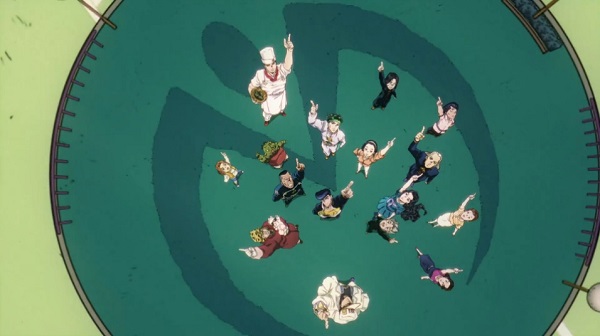 Thursday, July 15th continues to tick by as Josuke is confronted by a paper menace, and Rohan by an all too intimate foe. Though, last week, Josuke’s iron will seemed as if it might tear through Terunosuke Miyamoto’s paper prisons, fear and friendship get the better of him. Terunosuke feigns destroying the piece of paper in which Koichi is trapped, and though Josuke sees through the ruse, his love for his friend is too great to prevent him from biting his lip in fear. That frightened tell lets Terunosuke’s Stand 「Misterioso」 trap Josuke on the page, but not before he swears vengeance. With both Koichi and Josuke captured, a terrified Yuya Fungami must decide whether he’ll step in to the fray for these boys he barely knows. 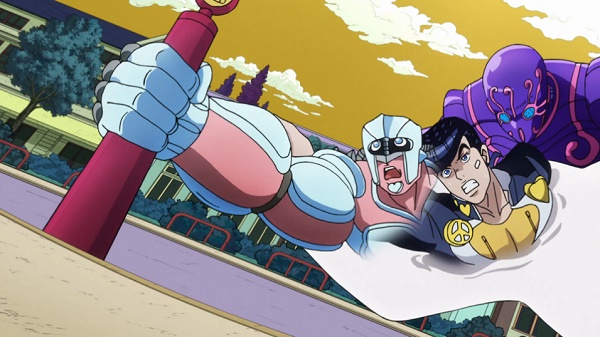 If only Rohan Kishibe had inspired the friendship and loyalty of his fellow Stand users. Maybe, he wouldn’t be home alone during a visit from the suspicious architect, Masazo Kinoto. After going through absurd lengths to keep his back hidden from Rohan’s view, Masazo walks right in to the icy manga artist’s trap; the classic “rug covering a hole in the ground.” Once snared, Masazo’s back is left exposed to Rohan’s curiosity. Rohan learns the danger of curiosity in the world of Jojo as Masazo lets out his final words– that he just knew he couldn’t let his back be seen– and his back splits open, letting out something else. 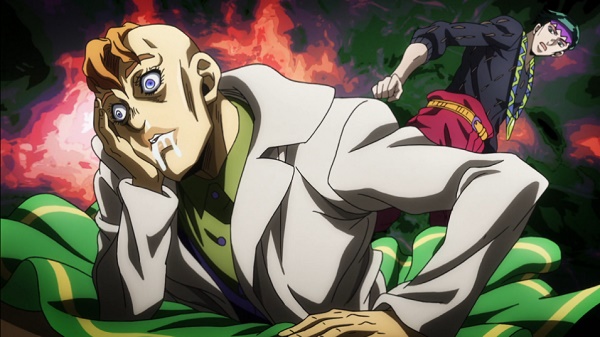 When you’re trying to stop killer Stand users, risks are meant to be taken. Hailing a taxi from within one of his pieces of paper, Terunosuke speeds toward Jotaro’s hotel hoping to finish the mission given by a haunted Poloroid. To his surprise, loyalty has overtaken the fear in Yuya Fungami’s heart, and 「Highway Star」 is hot on his tail. Terunosuke is confident in his traps, and sure he’s seen through the Speed King’s fear. He stops the taxi and lays the bait. If the valiant Stand users of Miorioh have been twice beaten, then Yuya is twice shy. He expects a trap, and maybe even a trap within a trap, but how many traps can he sniff out? 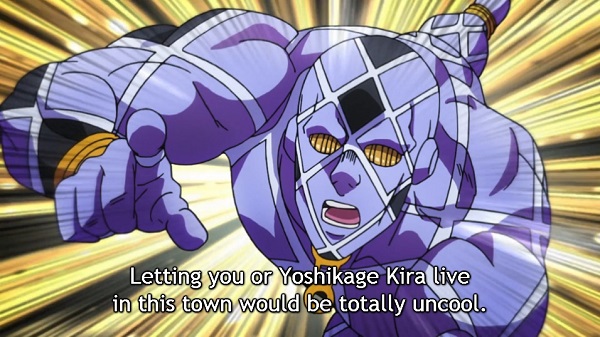 Yuya Fungami is a man of principle.

He smells chemicals. He smells metal. He feels a jolt of electricity. But, when faced with the near infinite possibilities contained within 「Misterioso」’s sheets of paper, Yuya doesn’t know what’s unfolding until it has fully leapt from the page. What better tool for a paper villain to keep folded up than a paper shredder? Somehow, the machine is powering itself and swallowing up the pages containing Josuke and Koichi. Yuya frantically tries to pull them free– to destroy the machine– to do anything– but he touches his chin in terror. With that tell, Terunosuke’s 「Misterioso」 commits the Street King to the page, and in to the shredder with this peers. 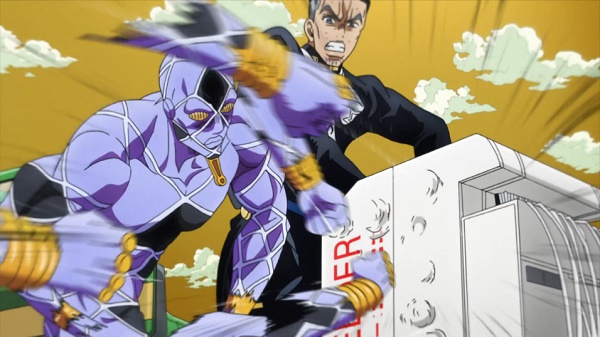 Not every Stand can punch its way out of a pickle.

What appears to be the final doom of this trio is actually Yuya’s final ploy. He’s found a way out of 「Misterioso」’s trap, but it is from within. Now slimmed down to the width of paper, Yuya and his Stand 「Highway Star」 are able to jam up the shredder and wrest free the sheets containing Josuke and Koichi. The duo returns the favor, and with all of the traps and fears dispelled, they face down a cowering Terunosuke. Rather than deliver on his promise of vengeful murder, Josuke binds Terunosuke in fitting irony, turning him in to a book. 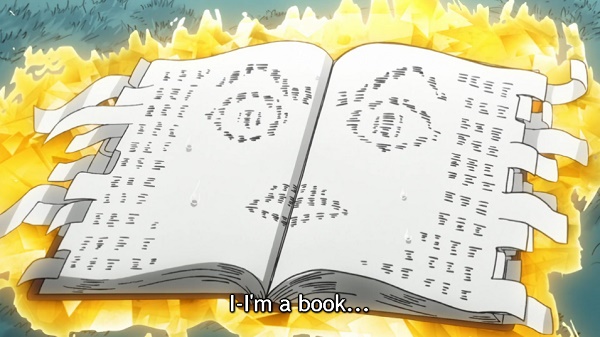 With the paper boy out of the picture, the pals head home. Koichi walks through the door to a ringing phone. On the other end, a panicked Rohan is desperate to make contact. There’s something he has to get off of his back, and it could mean someone’s life.