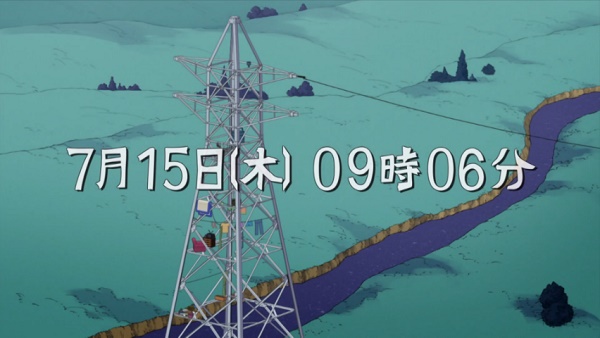 Thursday, July 15th is turning out to be an extraordinarily long day. Creepers abound as Morioh’s super pals work for the weekend. At a power pylon in a sunflower field, just after 9 in the morning, Josuke faces off with the curious Toyohiro Kanedaichi. Josuke’s alien friend Mikitaka hangs bolted to the skeletal metal structure. He’ll only make it out if the pylon Stand, 「Super Fly」, can take another prisoner in his place. 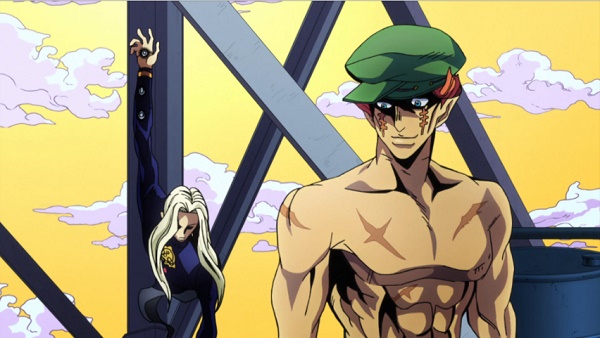 Luckily for the shape shifting space elf, there aren’t many messes that Josuke’s 「Shining Diamond」 (the Stand is obviously called “Crazy Diamond,” but nobody wants to get sued) can’t mop up. In a blink, Josuke magics his way up to「Super Fly」’s top, finally at level with the shirtless stranger. Playing the same tricks as in last week’s episode, Toyohiro damages the pylon, which in turn redirects the damage at Josuke. It’s a shallow ploy compared to last week’s reveal that Toyohiro hides razor blades under the thick calluses on his hands. 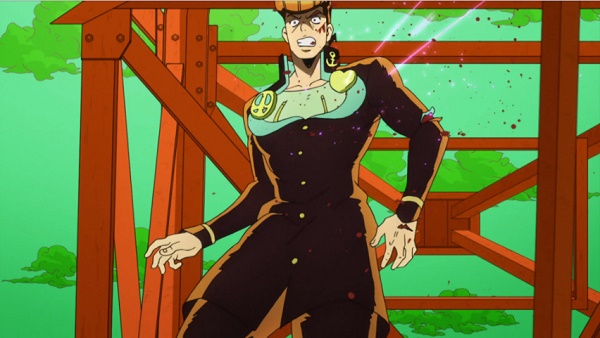 Every good plan starts with letting your opponent land a hit.

Of course Josuke would see right through that, and of course 「Shining Diamond」’s ability to rewind and reform energy would be perfectly suited to turning 「Super Fly」 against its master. Josuke’s riposte strikes Toyohiro right in the face in seemingly brutal fashion, though it really does more damage to his mask than anything else. Why is he hiding his identity with a mask? Who knows. It may be for the same reason he chose to take up residence in an electrical pylon. The guy’s weird. Very, very, very weird. As he relents immediately upon being attacked, he dumps the exposition that Josuke and company will need to further their investigation. Then, he resumes life in his pylon as Miorioh’s newest oddball landmark. 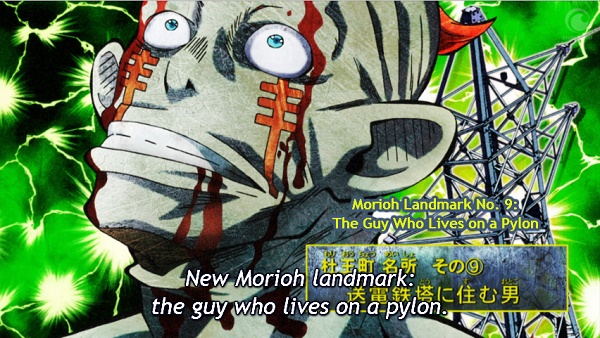 With Toyohiro and 「Super Fly」 in the rear view, Okuyasu pounds the pavement in search of Koichi while Josuke heads to the hospital in search of help. Racer, tough guy and total pushover Yuya Fungami has a nose that will catch Koichi’s scent, but he’s desperate to be left out of the danger he smells. It’s not clear if he’ll be so lucky. 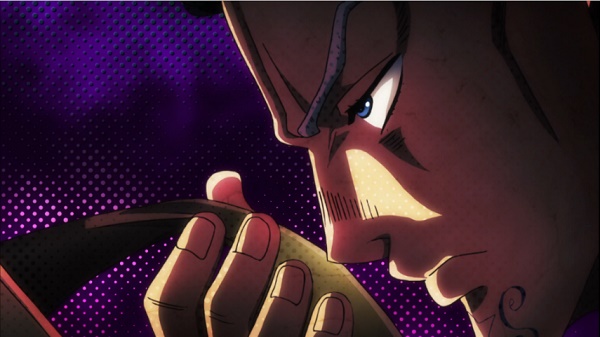 The trail isn’t long, as the creeper who faced Koichi has been following them for a while. Through some illusion of his Stand, 「Misterioso」, he returns an unconscious Tomoko to Josuke. With his mother in his arms and one of his best friends missing, Josuke’s rage is boiling over. The new adversary, Terunosuke Miyamoto, watches from the shadows. 「Misterioso」 has the power to trap matter within pieces of paper, whether it’s a cup of tea, or a teen boy. Before he can commit a victim to the pages of history, Terunosuke must observe some physical display of fear twice; like an involuntary facial tick. 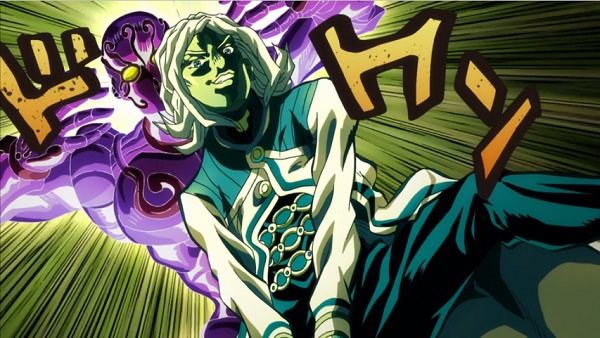 This sliver of Thursday, July 15th ends with Terunosuke frothing with certainty that he’s spotted the sign of Josuke’s fear, but I have my doubts. A Jojo is at its wiliest when its fate appears sealed. Plus, as Kira’s finger nails sickeningly grow with his desire to serial kill, the cracks in his facade will surely widen. Regardless, the showdown with paper boy will be bizarre.