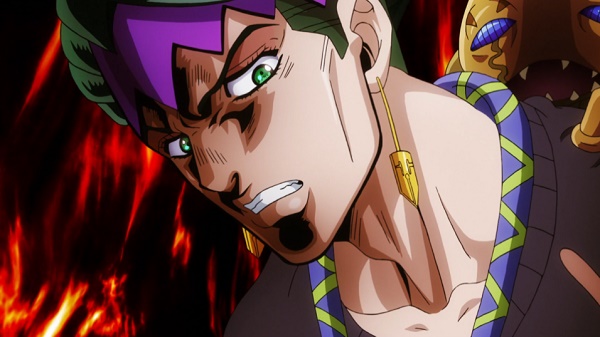 Thursday, July 15th has been rough on Rohan Kishibe, and he has something he needs to get off of his back. Though the infectious Stand 「Cheap Trap」 claims its only power is “talking,” it sells itself a bit short. Should anyone catch a glimpse of Ronah’s back, a fatal hole will tear open releasing 「Cheap Trap」 upon the onlooker. Rohan needs help, but who would possibly help such a snotty jerk?

Of course, the answer is Koichi; the precious small boy who can foster trust with almost anyone. Somehow, that well of trust is running dry, today. Though Rohan pleads with the tiny teen, the situation is questionable enough for Koichi to write it off as a prank. Rohan isn’t particularly known as a prankster, but he’s definitely a manipulative jerk. Regardless, Koichi turning his back on a friend who had to hide his own felt odd. Friends or no, Rohan needs to find a way out of this 「Cheap Trap」. He tells the hanger-on Stand that they’re going to see Jotaro at the hotel, if he can get that far with his back hidden. 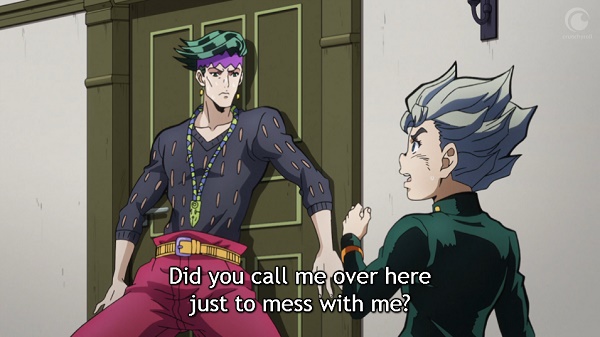 The further Rohan gets from home, the more he has to piece together 「Cheap Trap」‘s former host’s tactics for traveling without exposing his back. Whenever a wall isn’t available, awkwardly walking back to back with a stranger will suffice. Things are going surprisingly smoothly until packs of dogs and cats swarm the manga artist. 「Cheap Trap」 has always said its only power is talking, and apparently that power extends to animals. The Stand summons a house pet army to finally foil its host.

Luckily, this brash tactic is the breaking point of 「Cheap Trap」‘s deception. Finally living up to his reputation, the ever loyal Koichi steps in to the fray scaring off the animal horde. Though he hadn’t believed Rohan’s story at first, he felt bad and wound up following his friend, observing his sincere desperation to hide his back, and eventually the vicious animal attack. Seeing the truth of the situation, Koichi and his Stand 「Echoes」 try to weigh 「Cheap Trap」 down, dragging it off of Rohan’s back. Unfortunately, physical removal will kill its host as surely as being seen. With a gushing wound on his back, Rohan struggles onward, seemingly on the brink. Thinking his friend has lost it, Koichi realizes where they are. 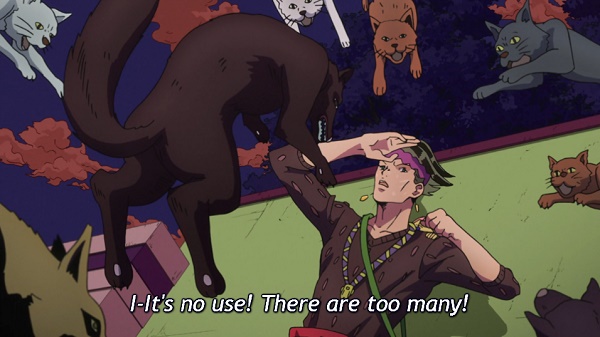 Rohan had just inched past a familiar postbox. He had never intended to take 「Cheap Trap」 to the hotel, but instead worked his way to this haunted alley. Years prior, in a nearby house, Kira Yoshikage committed his first murders. Now, the alley is a beguiling cursed maze. Once the exit is in sight, should anyone look back, the souls of the dead will drag their soul in to the beyond. And so, the unaware Stand looks back to see the ghostly hands of fate reaching for its throat. Though physical means could not rip it from Rohan’s back, the mystical hands of souls could. Does it make more sense for the souls of the dead to effect this Stand than for other Stands, which are the embodiment of people’s souls, to effect it? Whatever. To cap off their adventure in the haunted alley, Koichi and Rohan are visited by the ghost of Reimi Suigimoto– one of Kira’s first victims– and she senses something amiss with Rohan’s collection of surveillance photos. 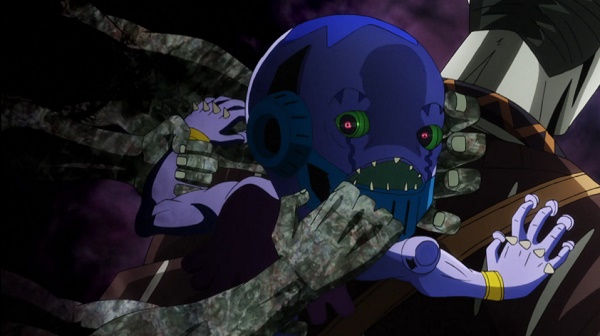 As his fingernails visibly grow with a sickening creaking sound, Kira Yoshikage also struggles to hide something. He just wants to live a quiet life, and also resume his serial killing, but rude people continue to disrupt his life in incredibly minor ways. This street punk and his girlfriend bumping in to him on the train is enough to make a man relapse in to serial killing! Literally. They bump into him exiting the train, so he follows them back to the woman’s apartment where he plays the Kira Yoshikage classics of “turning people in to bombs,” and “keeping a woman’s hand as a souvenir.” 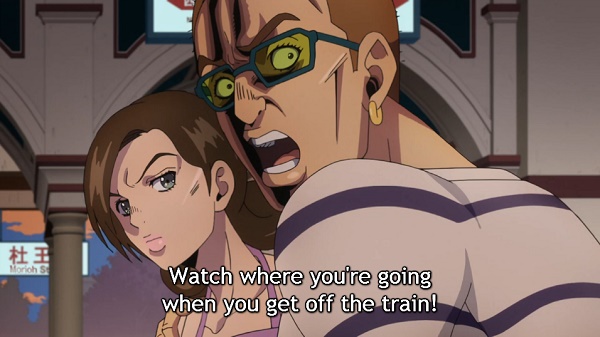 The only thing that could disrupt this gleeful traipse down murderous memory lain would be a creepy little boy filming the whole thing. Hayato never dropped the pursuit of his false father, and Kira never caught on. He only realizes he’s been had as he steps out of the apartment and sees the boy fleeing on the sidewalk below. His uncomplicated life of exploding people has never been more complicated. He heads home to assess the damage done to his disguise, narrowly missing Jotaro.

Following leads on missing people has been fruitless so far, but this woman’s apartment definitely shows evidence of foul play. From multiple angles, Moiroh’s Stand gang are finally closing in on the Kawajiri household.

But they aren’t there, yet. Having witnessed a man with his father’s face reducing a couple to ash with a simple touch, Hayato decides to sooth his troubled mind with a nice warm bath. He doesn’t know what to do with his video evidence of this inexplicable event, which is understandable, but also decides to puzzle it over while nude, in an enclosed space, in the residence of a known imposter and murderer. That’s a little less understandable. He pays for this decision when Kira arrives home and, playing the part of concerned water conscious father, joins the boy for a bath. 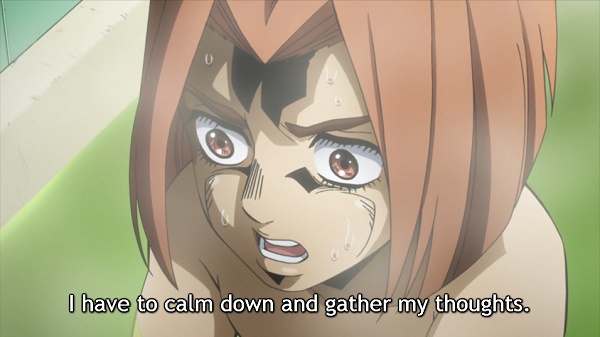 What follows is a deeply uncomfortable nude cat and mouse game, as conspicuously muscular not-father and not-son vie for control of the incriminating tape while trying not to let on that either knows the tape exists. As Kira moves to kill the boy, hoping to play it off as a slip and fall accident, Hayato senses he’s out of room to maneuver and calls the imposters bluff. He reveals the murder tape, along with a collection of other tapes of other questionable and incriminating things. For now, he’s won a stalemate, but will he find someone to turn to before the whole situation explodes?