This past weekend at NYCC  we were able to talk with Joe Corroney, a wonderful and prolific artist who has been working with Lucasfilm since 1996. He’s worked on trading cards, games, comics and so much more. His latest Star Wars project is the upcoming Star Wars: Rebels Files book, diving into the exclusive files of the Rebellion. The book touches on the timeline between Star Wars Rebels and the upcoming The Last Jedi and will be released in conjunction with the series Journey to Star Wars: The Last Jedi. He took some time out of his busy day at NYCC to talk to us about the book. 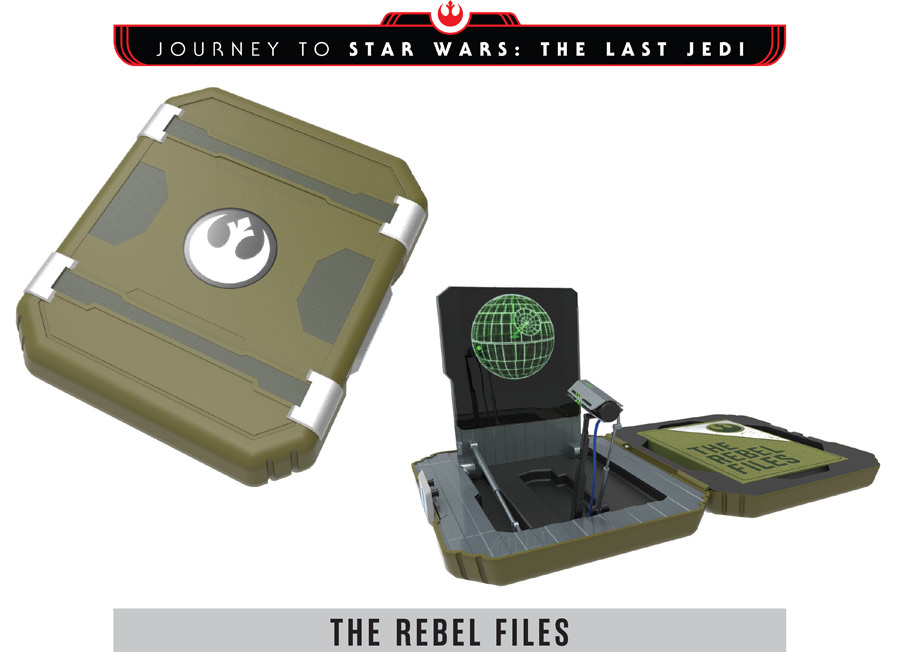 GGA: First off, real easy, what is your first memory of Star Wars?

Corroney: It was actually seeing the movie in 1977. I was 4 years old. And seeing Darth Vader come through the smoke of the blasted out door on the blockade runner – that was my first visceral memory of the experience of seeing Star Wars. And for the first time, it was so visceral for me and seeing Darth Vader, I had never seen anything like that before. And in 1977 when you’re 4 years old and you see this giant black creature come through the door, I was frightened. I actually hid behind the chairs in the theater and I remember peaking between the seats. So Star Wars had that effect on me from the get-go where Darth Vader scared the heck outta me as a little kid. But, obviously I love Star Wars. As I got older, Vader became my favorite character, I love illustrating him. I love drawing him. So even though I was scared of him as a little kid, obviously I grew out of that. He became my favorite Star Wars character to work with in my Star Wars art.

I was gonna say, is he your favorite to draw?

Yeah, absolutely. Yeah, because, I mean I don’t just paint pretty Star Wars pictures, I consider myself a storyteller. A lot of my artwork involves storytelling. I do a lot of artwork for publishing as well, so as a storyteller, I like working with Darth Vader as a character because I find his story and his story arc very compelling and fascinating.

You’ve done a lot of artwork on ships for the upcoming Rebel Files. How do you approach storytelling when drawing them?

Well since I’m such a huge Star Wars geek, I mean Star Wars is why I became an artist as a little kid anyway. So yeah Vader’s my favorite character to work with but with the Star Wars Rebels book, Rebel Files, I mean I got to illustrate a bunch of Star Wars ships for that. For me that was a thrill. A lot of ships I had never illustrated before. So in that sense, it’s not as exciting as working with Boba Fett or Darth Vader or Luke Skywalker but for a Star Wars fan like me, when I’m asked to illustrate – “Hey we need 20 ships and weapons and vehicles” I’m so excited because I’m still getting to illustrate Star Wars. It’s part of the job.

Rebel Files is a unique project, how has it been illustrating ships between Star Wars Rebels and The Last Jedi? And what has been the most challenging thing about working within this timeline?

That’s a good question. I don’t know if there’s been…I mean I guess the one unique challenge I can think of is the fact that now that canon has been rebooted, I’m working within constrained confinements of – certain things are off limits now. Whereas, certain stories and characters and periods have been established before. Luckily as a fan, also as a Star Wars professional, I kinda keep tabs on everything. You know, I read a lot, I pay attention to all the source material that comes out. Besides the films obviously. So I kinda know what is off limits, I know what’s been changed, what hasn’t. Still having to work in the new canon, it’s a little tricky just because there might be something I want to draw, that I used to be able to draw, and now I can’t because it’s off limits, for example. Not that that’s really happened too much but just working with the story group, working with licensing, finding out what is off limits and what isn’t, it’s a new unique hurdle.

What has been your favorite ship to draw in the new book?

Well I got to do the medical frigate from Empire Strikes Back. That was really fun and I don’t think I ever illustrated that ship before and I really like the design of that one in particular. And also because it’s from Empire Strikes Back. It’s such an iconic ship. That was probably one of my favorite ones I can remember. I mean I love drawing a bunch of them. The blockade runner was fun. I’ve illustrated that one a few times over the years – that’s such a classic ship. Whenever I get to do ships from the films, that’s always fun.

And one final question for you – what is the most complex piece you’ve ever done?

Well, I just did a Game of Thrones piece for New York Comic Con, if you can see it right here (see the image below), it’s pretty complex. It’s not Star Wars but it’s Game of Thrones.

Oh we love Game of Thrones, too.

I illustrated this for New York Comic Con and it’s got most of the characters – that are still alive anyway. So it’s got a lot of characters in it and it was pretty intense to illustrate. It took me a few weeks to knock it out. Normally I can knock stuff out faster but this one – I put a lot of love into it. As far as Star Wars goes, unique artwork, I did a Revenge of the Sith poster I did back in 2005, that was a huge poster for Star Wars Celebration. It was done really big, so it’s actually a really large poster. That was very complex. [Laughs] There was a lot of characters – yeah, that was probably my most other complex illustration I would say.

Has that been your favorite?

It’s one of my favorites because it’s personally rewarding. But I have other favorites I’ve done. And it’s usually whatever’s newest is my favorite. Like this Game of Thrones piece. Because I just did it. It has everything in it that I’ve learned as an illustrator so far. In that sense, it’s my favorite.

Thank you so much for your time. 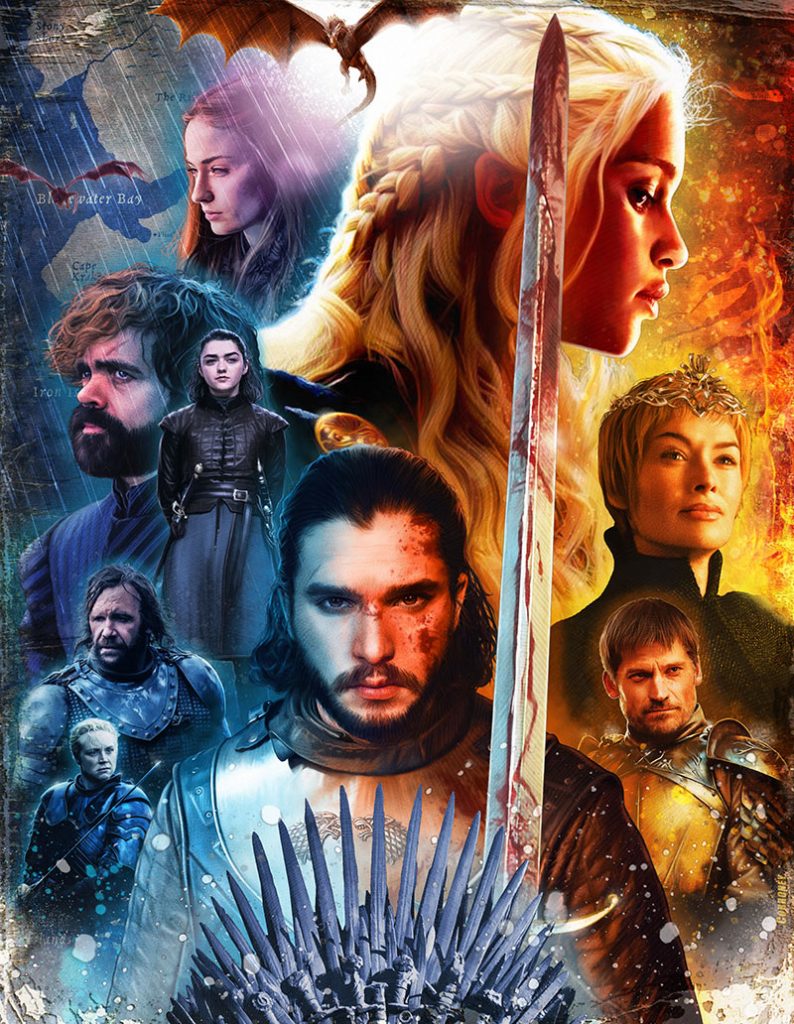 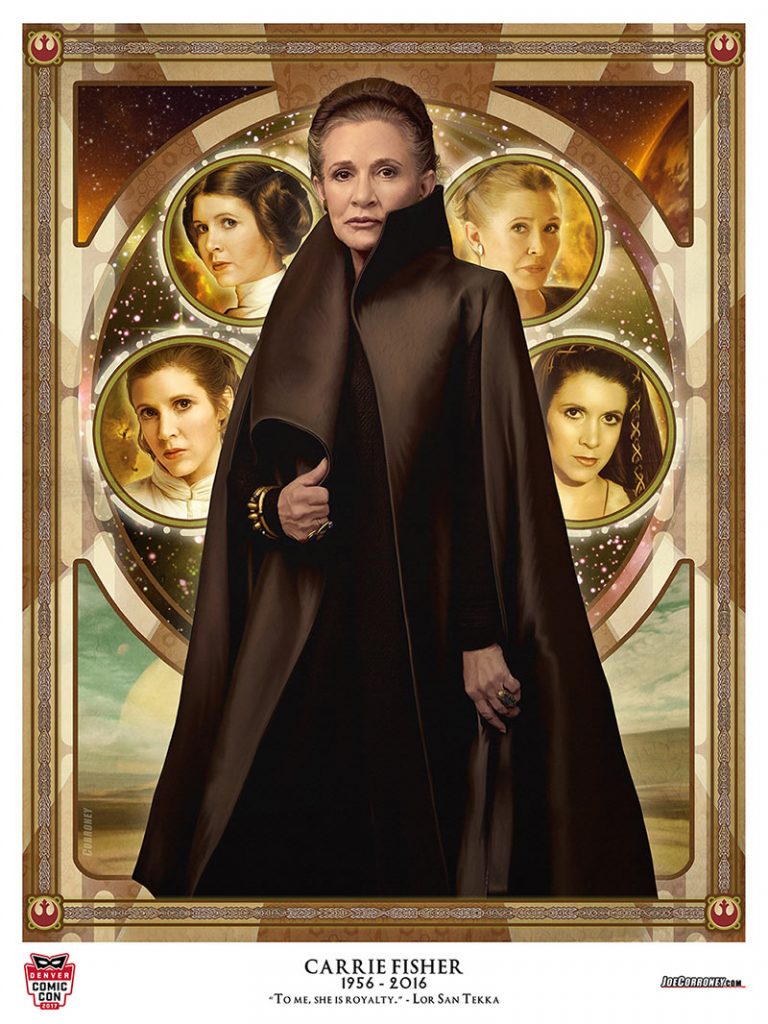 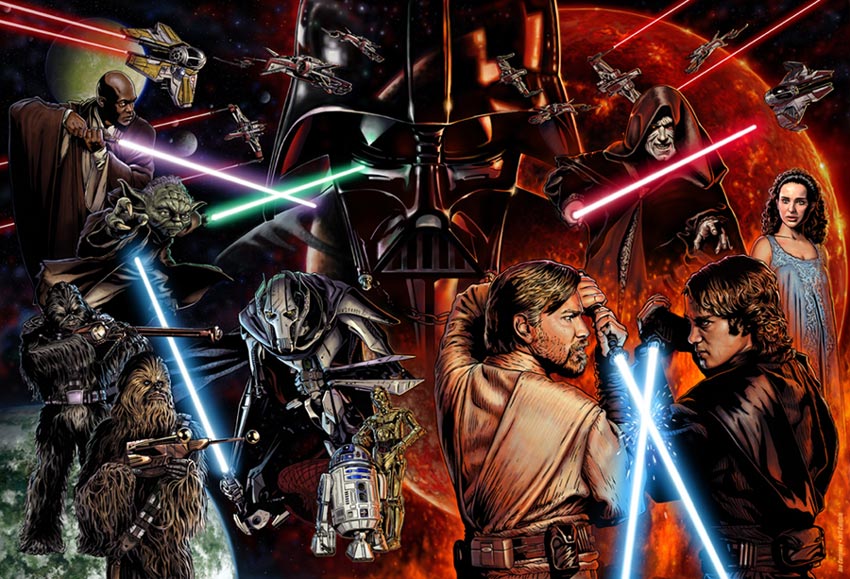