Home » Movies » Marvel » James Gunn Says Gamora, Mantis and Nebula Will Have Toys for this Film!

James Gunn Says Gamora, Mantis and Nebula Will Have Toys for this Film!

Perhaps a new dawn is finally rising in the tumultuous under-representation of women in the action figure market. In a Q&A on Facebook with James Gunn, Eduardo D. Jorge, a fan, asked director James Gunn if he’d finally be able to buy his daughter a Gamora (Zoe Saldana) action figure. Gunn’s response was, “I’m making sure this time around the female characters are more represented in the toy world. Not only Gamora, but Mantis, Nebula, and Elizabeth Debicki’s character as well.”

This is exciting news on a few different levels. First of all, there’s a victory for women in that they are finally getting equal representation of their characters in the toy market. This carries with it the acknowledgement from the toy companies that women are every part as bad ass as the men and that the “little boy” demographic actually wants to play with those characters. Also, and just as important is that the “little boy” demographic includes little girls who want to play with the characters they see in the movies. 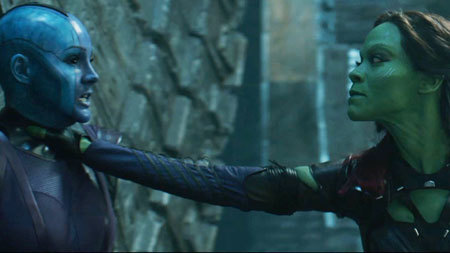 It’s a victory all across the board.

But, this sentence also carries with it a bit of information about the film. Gunn says, “not only Gamora, but Mantis, Nebula and Elizabeth Debicki’s character.” That is, Mantis and Nebula are going to be just as important to the story, will have toys and will be cool enough that kids will want to play with them. Not only that, but he’s keeping Debicki’s character under wraps still, which continues to paint her with some exceptional importance to the story. This to us just confirms even more that Debecki is most likely the villain of the film and that she is, more than likely, Ayesha.