The acting community lost one of its legends today. Roger Moore, known to most as the longest running actor to play British super spy James Bond, has died.

The Telegraph reported that the 89 year old actor passed away in Switzerland after a short battle with cancer. Moore’s family announced the actor’s passing with a short statement.

With the heaviest of hearts, we must share the awful news that our father, Sir Roger Moore, passed away today. We are all devastated. pic.twitter.com/6dhiA6dnVg

Roger Moore was born October 14, 1927 in the south of London. An only child, Moore expressed an early interest in not only acting, but the arts in general. The New York Times describes the young man’s interest in becoming an artist, which even brought him to work at an animation company before his acting career took off.

Roger Moore made his screen debut in 1944 as the United Kingdom was embroiled in World War II. His initial roles were unspeaking parts, first playing a soldier in CAESAR AND CLEOPATRA starring Claude Rains and Vivien Leigh. According to Variety, the film’s assistant director Brian Desmond Hurst took an interest in the tall, good-looking young actor and helped him gain a foothold in the industry.

Moore’s career continued in earnest after his World War II service with a number of small roles. In those early years, his popularity stemmed from his relatively aristocratic good looks. He often found himself type cast as military men, aristocrats and diplomats. However, his break seemed to solidify in the early 1950s, when he came to the United States. The young actor featured in THE LAST TIME I SAW PARIS. The 1953 film starred screen legends Elizabeth Taylor and Van Johnson. Soon, an increasing number of roles seemed to pop up in rapid succession.

Before long, Moore secured his first recurring television role. In 1958, producers cast him as the title role in Ivahoe. The upcoming British television series was based on the popular Walter Scott novel of the same name. The show premiered on ITV in 1958, and ran for 39 episodes.

With his first starring role finally secured, Moore’s career picked up speed dramatically. He secured a regular role in the popular television western MAVERICK. Moore had big shoes to fill, as the New York Times reports he joined the series as a replacement for series star James Garner, who departed the popular western at the start of its fourth season. Moore then joined the cast of THE ALASKANS. The  short lived series aired on ABC during the 1959-1960 television season.

In 1962, Moore secured one of his most popular roles, and likely the one which secured his eventual career as James Bond. THE SAINT debuted on British television in 1962 and ran on ITV for 118 episodes before eventually ending in 1969. Variety writes, “Moore began playing one of the roles that would define his celebrity, dashing thief Simon Templar would steal from rich villains each week…”. The series initially ran in the United States in syndication. However, NBC later picked up The Saint as part of their primetime line-up. 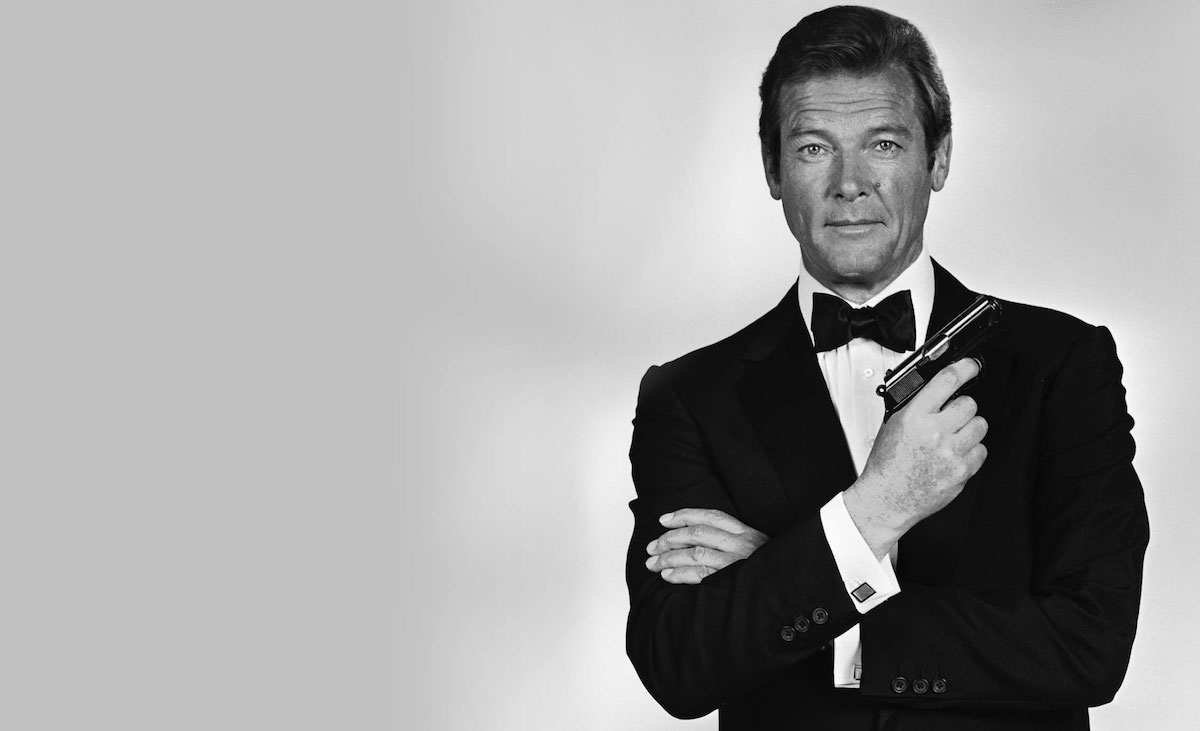 In 1973, Moore took over the role which would come to define his career. He joined the iconic James Bond franchise as the popular super-spy in LIVE AND LET DIE. While Moore has dozens of film credits to his name outside of the Bond cannon, many of his best remembered films are encompassed in his 13 years as the British spy.

Moore still holds the record as the longest running James Bond, with seven films to his name: Live and Let Die, THE MAN WITH THE GOLDEN GUN, THE SPY WHO LOVED ME, MOONRAKER, FOR YOUR EYES ONLY, OCTOPUSSY and A VIEW TO A KILL. Variety credits Moore’s fun and often campy films for revamping the series, which started to struggle with the departure of audience favorite Sean Connery. The BBC describes his Bond as “…Calm and suave- a smooth operator who could get himself out of any tricky situation with ease”.

After departing the franchise after A View to a Kill is 1985, Moore kept busy. In 2008 he published an autobiography “My Word Is My Bond”. While he continued working on screen until his death, he also focused heavily on charitable causes later in life. The New York Times reports that the actor became a UNICEF Goodwill Ambassador in 1991, and had a particular interest in children’s causes.

In 1999, Moore was honored with the ceremonial distinction, Commander of the British Empire.

A generation of film goers grew up watching Roger Moore as their James Bond. The actor enjoyed a lengthy, legendary career both on film and on television. His contributions to both industries, as well as his place in the hearts of generations of fans will live on.