Home » Movies » Introducing the Caretakers of Ahch-To in STAR WARS: THE LAST JEDI

Introducing the Caretakers of Ahch-To in STAR WARS: THE LAST JEDI

EW has given us a big scoop on the creatures of Ahch-To from Star Wars: The Last Jedi. While we previously met the pesky porgs that immediately stole our hearts, there is more to the island. And maybe not everything we thought we knew is true regarding the island and it’s residents.

First – PORGS. Because I can’t get enough of these little guys. As a refresher, we’re told that the porgs were inspired by the real-life puffins that inhabit Skellig Michael, where they filmed Ahch-To’s scenes. And like the puffins, they get everywhere! Including the cockpit of the Millennium Falcon as we see in this new screenshot. 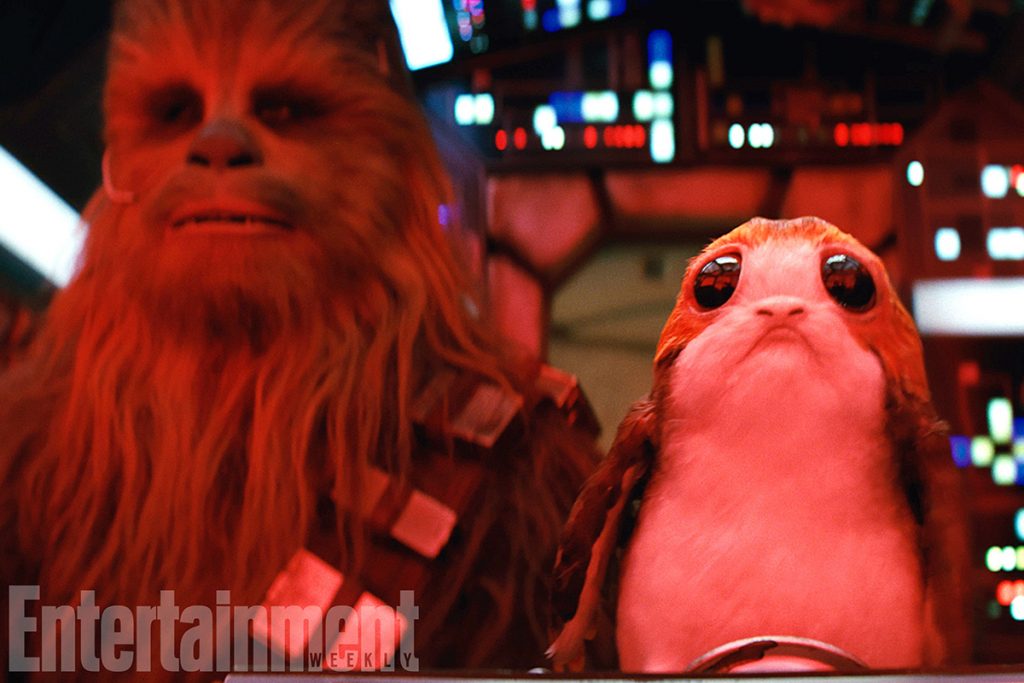 Rian Johnson revealed that while he sent Luke Skywalker into exile, he didn’t want him to be alone. While there’s no humans around for him to interact with, he has the Porgs.

RELATED: Luke Skywalker Is a Broken Man in STAR WARS: THE LAST JEDI

If you go to Skellig at the right time of year, it’s just covered in puffins, and they’re the most adorable things in the world. So when I was first scouting there, I saw these guys, and I was like, oh, these are part of the island. And so the Porgs are in that realm

And the Porgs aren’t the only ones living on the island. It also has caretakers. While we don’t learn the name of the alien race these beings are, we learn that they’ve been there for a long, long time. It was originally thought that the Porgs were the caretakers of the island. But it appears that’s not the case.

They’re kind of these sort of fish-bird type aliens who live on the island. They’ve been there for thousands of years, and they essentially keep up the structures on the island.

We also learn that they’re all female! Johnson mentions that he wanted to make it a “nunnery” of sorts. And they communicate with Luke through a “blubbery sort of Scottish fish talk”. I have no idea what that means, but I’m excited. Especially because they don’t like that Luke is there, only tolerating him. It will be like Luke is a tenant and the landlords aren’t overly fond of his grouchy presence.

The mystery of Ahch-To will partially remain a mystery. Apparently we will be touching on the religion but not fleshing it out. And this is truly the beginning of the Jedi, according to Johnson.

Hopefully it will be fun to discover in the context of the movie. My notion was this is a place that goes all the way back. This is where the cave paintings are. The first designs that we had were temples, and I just kept pushing it back and saying, ‘No, think earlier, think earlier. Let’s push this all the way back and see how deep we can go into the foundations of where this all started.’

While I’d love to know everything, it will be interesting to see just how much we’ll learn. I’m so excited to explore Ahch-To – and steal a porg. Steal 2 porgs. STEAL ALL THE PORGS! But really, I can’t wait to see how the first Jedi temple will tie into Luke’s reasoning for staying on the island.

What do you think of everything we learned about Ahch-To? Let us know! Be sure to come back to Geek Girl Authority for more Star Wars news. The Last Jedi will be in theaters December 15th.