An Intro to Jojo and Bizarre Adventures in Anime 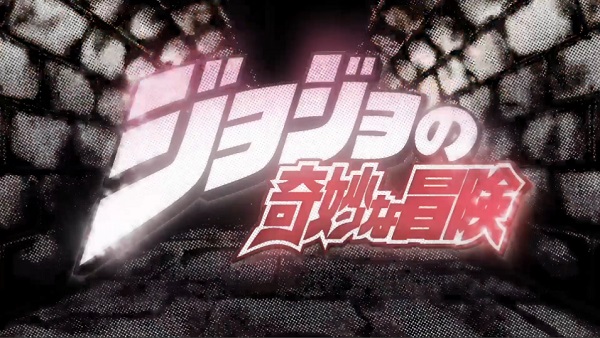 Have you spent much time on the internet? Do you know people who watch “anime?” If so, you’ve probably already seen a Jojo, perhaps without even realizing! The Jojos are many, and wIth this I invite you to join in on their Adventure. Their Bizarre Adventure. Jojo’s Bizarre Adventure.

Thanks for asking. “Jojo” refers to many descendants of the cursed and gifted Joestar bloodline, usually bearing a name that begins with “Jo.”

From one generation to the next, Joestar descendants are besought by deadly mystical forces. Their struggles reverberate through the ages, with each new Jojo inheriting some aspect of the prior’s power, and their conflicts.

I Can Buy the “Adventure” bit, but is it really Bizarre?

I can’t overstate how little I want to mislead you, here. The Adventure is undeniably Bizarre.

What seems to start as your average Victorian era European-martial-artists-versus-vampires action series eventually blossoms into a decades long saga, spanning eras and continents.

Only a little. Barely even any. Moderate to minor vampires. I suppose this is where I actually have to explain what these Jojos are. So, we start with the first Jojo to ever Jojo. 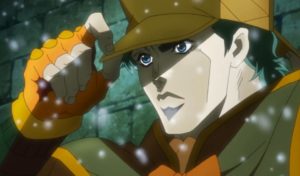 Wealthy British lad Jonathan Joestar starts our tale. His widower father George, a successful trader, tips the scales of fate by bringing two things in to his and his son’s life: a mysterious Mesoamerican stone mask, and his dead friend’s orphaned son, Dio Brando.

Jonathan’s story is of his lifelong conflict with his devious, sociopath adopted brother. Dio is, and will continue to be, the worst sort of jerk. A mixture of his violence and dumb luck will awaken an ancient Mesoamerican stone mask– sprouting spikes that pierce the wearer’s skull– turning him, as promised, in to a vampire.

To combat Dio and his vampire hordes, Jonathan enlists the aide of friends with names like “Robert E. O. Speedwagon,” and “William Anthonio Zeppeli.” Zeppeli, an Italian martial arts master who has a history with the stone mask, teaches Jonathan the mystical art of “ripple.” Ripple is your all purpose life-force-channeling martial arts magic. Through breathing techniques, a practitioner of the form can harness “hamon” energy– the energy of life and sunlight– and use it to do all sorts of bad ass things necessary to the plot. 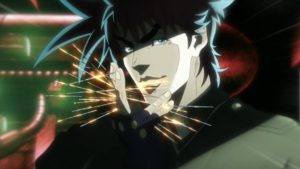 America. 1938. A ruffian named Joseph Joestar (Jonathan’s grandson) tears through New York City. Though born to the wealth of the Joestar fortune, Joseph loves to do a crime and get up to no good. His tendencies shift, however, after learning that family friend Robert E. O. Speedwagon is in trouble!

More than any other arc in the Bizarre Adventures of the Jojos, Battle Tendency follows a structural formula that is common among action anime.

The villains appear: ancient beings– the creators of the stone masks and progenators of vampires– awaken from their stone pillar prisons within ruins in Mexico and Italy. Continuing the wonderful naming conventions, the “Pillar Men,” Santana, Wamuu, Esidisi and Kars take turns clashing with Joseph and his growing cadre of friends.

Wamuu and Esidisi set a ticking clock, infecting Joseph with a time release poison that will give him one month to train for a final confrontation. While the villains get down to their villainous machinations, Joseph and his new pal Caesar Anthonio Zeppeli start their extreme training regimen.

There’s also a continuous awkwardness as Nazis pop up in alternating Nazi-like and heroic roles; not Superman style heroic, so much as bumbling convenient heroism like the TIE fighter pilot who panics and knocks Darth Vader out of the Death Star trench.

That aside, Joseph sets the standard for cleverness among Jojos. His fights are always dynamic and his methods ludicrous. He predicts his opponent’s next lines of dialog while they and viewers alike try to puzzle out what could possibly happen next. Will a squirrel be used as a weapon? Will a Nazi cyborg show up as a distraction in the nick of time? Yes. And so so much more. 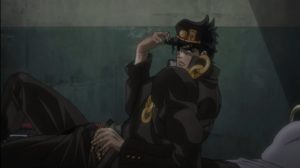 Welcome to the 80s. Or, maybe you never left? This Era of Jojo begins in Japan and jet sets to Egypt. Our hero this time is teen, ruffian, and all around grump Jotaro Kujo. His jacket is awesome. His gaze his steely. His hat is his hair?

Young Jotaro’s destiny is revealed with the arrival of his grandfather, sixty seven year old Joseph Joestar. Joseph has come to Japan to find his grandson and deliver the sort of bad news that only floats within a Bizarre Adventure: Dio isn’t dead, and shit’s getting weird.

Jotaro’s mother, Holy, is dying. As it would happen, Dio’s decapitated head latched on to the corpse of the late Jonathan Joestar and, over the decades, fused with it and surfaced from his watery grave with mysterious new powers.

The weird new powers, called “Stands,” are the central focus of Stardust Crusaders, and will continue playing a major role throughout the rest of the series. Think of them, in general, as a sort of patronus, or guardian angel; though their nature can vary so wildly that any weird idea can manifest as a person’s Stand.

For instance, the Oingo Boingo Brothers’ stands give one the ability to shape shift, and the other has a comic book that predicts the immediate future. On the other hand, Jotaro’s Stand– Star Platinum– Is just a purple dude who punches really fast.

I haven’t touched on the plot of this arc, because the plot is pretty basic. Holy is deathly ill due to Stand complications, and Joseph thinks he can save her by killing Dio. Once he has Jotaro onboard, they set off for Egypt, making new friends and fighting new weirdos along the way. 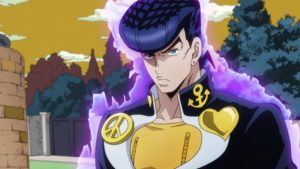 Now a responsible adult with a different weird jacket and hat, Jotaro travels to the Japanese suburb Morioh to find… his teenage uncle Josuke Higashikata.

On the verge of the New Millennium, Jotaro is seeking the aid of trustworthy Stand users. He thinks something rotten is going down in Morioh: someone other than Dio is creating new Stand users. Rotten Stand users.

What unfolds is as close as Jojo’s comes to “slice of life.” As much time is dedicated to Jotaro and Josuke solving Stand crimes as is given to the high school antics of Josuke and Pals. Sometimes they’re chasing down serial killers. Sometimes they’re using a friend’s Stand to scrounge piles of coins and prize tickets.

It’s a severe break from the more focused stories of the prior arcs, but the rapid tonal shifts give even the lighthearted stories a tinge of dangerous possibility.

Hopefully you didn’t even get this far and have already started watching some Jojo’s. If not, maybe you at least now recognize the pretty anime muscle men striking dramatic poses on your Twitter timeline.