DISCLAIMER: This recap and review of Marvel’s Inhumans contains more spoilers than the number of times Lockjaw has teleported someone to safety. This is a rather frequent occurrence. You’ve been warned. Enter at your own risk.

Welcome, Inhumans of Attilan! Marvel’s Inhumans premiered its first two episodes exclusively in IMAX theaters yesterday. I was one of the few who eagerly purchased my ticket for the event. Let’s not beat around the bush, my friends: I have thoughts. You also may be aware that I have feelings as well. Now, we’ll get to the “feelings” section in a jiffy, but first, allow me to whip up a brief recap of “The First Chapter.”

We’re introduced to the Inhumans through Triton (Mike Moh), who encounters a young girl running from authorities on Oahu. Unfortunately, the green skinned super being is attacked by said authorities himself and jumps off a cliff to evade capture.

Next, we’re on Attilan, the Inhumans colony located on the Moon. King Black Bolt (Anson Mount) and Queen Medusa (Serinda Swan) reign supreme. We discover that a rover from a human space center accidentally encounters the invisible city, making contact with its fortress. Gorgon (Eme Ikwuakor), the head of the Royal Guard, stamps the rover out with his massive hooves.

Thus, the council meets with the King and Queen to discuss the event. Karnak (Ken Leung), an expert martial artist and strategist, is also present. Are humans close to unveiling the secret Inhumans on the Moon? Black Bolt insists they wait to see how this unfolds. Whereas his brother Maximus (Iwan Rheon) believes the time to act is now. Time for them to return to Earth and claim what is rightfully theirs. Black Bolt remains resolute in his desire to keep the peace, and Maximus (for now) heeds his wishes. 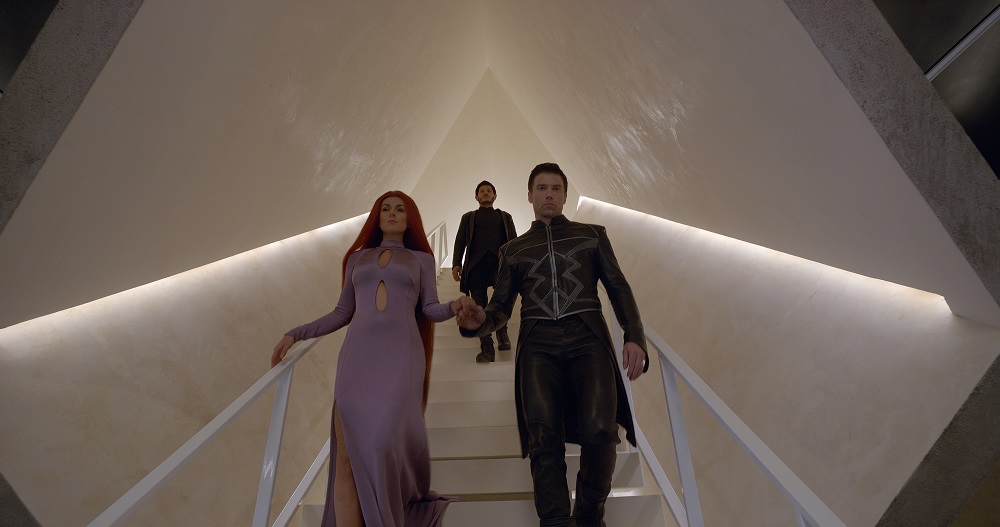 Next, we bear witness to a Terrigen Ceremony, where Inhumans are exposed to the Terrigen crystals to determine if they possess superhuman abilities. A young boy is exposed and seemingly emerges without abilities. That is, until he touches Maximus and tells the latter his future.

Later, Black Bolt reveals to his family that Triton is presumed dead after attempting to retrieve an Inhuman girl on Oahu. Gorgon vows to search for his brother, unconvinced he’s perished. Lockjaw, the family teleporting dog, transports Gorgon to the Hawaiian island to commence the search.

Then, we see Maximus try to sway Medusa to his side. He has a crush on our Queen, that is evident. Medusa lives up to her name by strangling Maximus with her hair, but only enough to send him a clear message. After she leaves, Maximus realizes the young boy’s prophecy about him came to fruition.

Next, Maximus sets his own plan into motion – he cuts off Medusa’s powerful tresses. It’s revealed that his own guards were on Oahu chasing that girl, and they made Triton disappear. Crystal (Isabelle Cornish), Medusa’s younger sister, gets the memo and has Lockjaw teleport Karnak, Medusa and Black Bolt to Earth. Crystal herself stays behind and is thus held captive by Maximus. After Crystal attempts to contact Medusa, Auran (Sonya Balmores) traces the call. With Maximus’s permission, she ventures to Earth to bring the Royal Family back to Attilan. 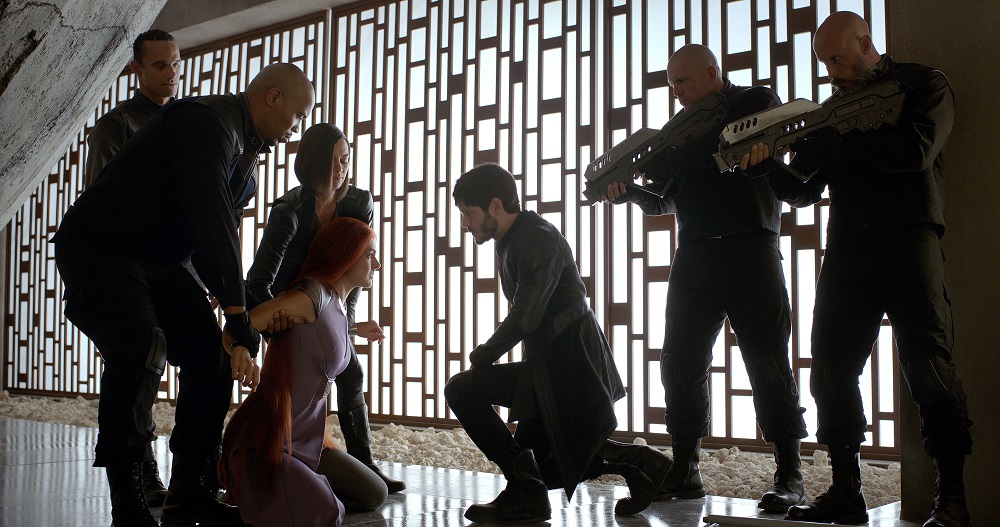 Now, our King and Queen endure quite the adventure while on Hawaii. Medusa lands in a crater but manages to reach Honolulu proper via bus. Black Bolt is teleported smack dab in the middle of Honolulu traffic, taken aback by the cars careening toward him. Karnak is stuck in a forest and feebly tries to reach Black Bolt. Gorgon initially encounters Maximus’s guards but is able to fight them off. Then, he encounters a group of surfers and tells them his life story.

Meanwhile, Maximus tries to glean information from Crystal on her family’s whereabouts. Earlier he sequestered Lockjaw away, sedated and out of commission. Crystal refuses to budge, not bowing down to the traitorous Maximus. Maximus plans to rule in his brother’s stead, taking the throne for his own. Someone’s been watching too much Game of Thrones (you know, because Rheon was on the show). 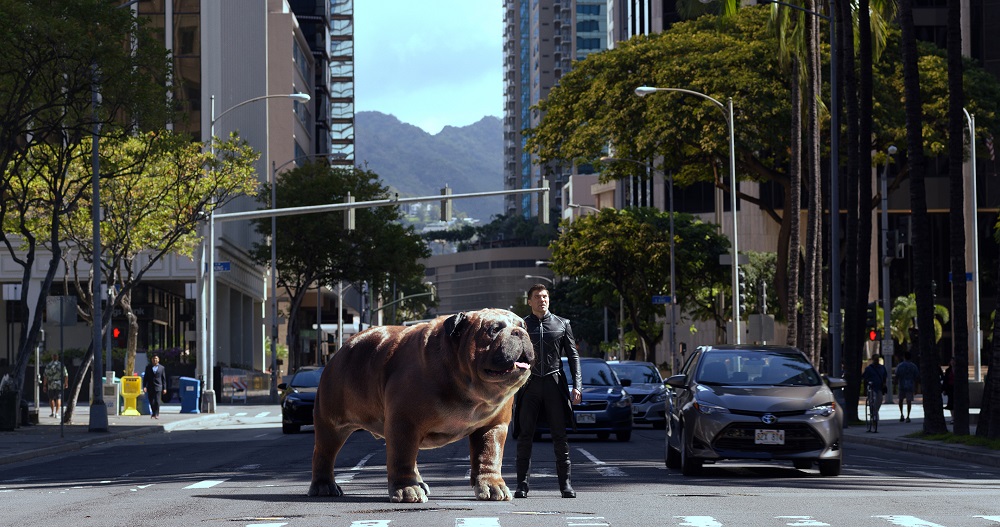 Pictured: A giant teleporting dog and a confused Inhuman King in sunny Hawaii.

Later, Black Bolt causes a ruckus all throughout Honolulu and winds up in jail. Medusa encounters Auran and the two fight to the death – well, Auran’s death, that is. Go Medusa, go!

Then, we see Maximus make a grand and sweeping speech to his people, and boy, do the people love him. He plans to bring the Inhumans out of the shadows, to live in the world they were meant to live in. People working in the mines need not fret any longer, for their days mining underneath the Moon’s surface will soon come to an end. Maximus is charismatic, and that’s what makes him dangerous.

We end with a lovely post credits scene, since this is Marvel after all. Auran emerges from the dead and heals the lovely stab wounds Medusa left in her wake. She contacts Maximus and requests backup. Those rascally Royals!

Now, my review. Inhumans is like watching water boil – it’s a slow build, but eventually the payoff comes to pass. Although, we don’t get a lot of time with the characters prior to all the action, which makes it difficult to root for the good guys sometimes. Inhumans also has a tendency to take itself a bit too seriously. We’re so used to Marvel shows/films having a series of light-hearted moments peppered throughout the action and drama. It provides balance, moments of levity to keep the scales even.

Also, and forgive me for getting materialistic for a moment, but I was glad to see Medusa’s hair gone. That wig was the bane of my existence. I couldn’t help wondering why the wig looked so cheap when Disney is behind the series. I get it, they also had to use special effects to make said wig move, but Lockjaw looked amazing! Alright, materialistic moment has passed.

However, not all my thoughts are mere complaints. Here’s the good stuff! Anson Mount is the MVP. Having to play a character who’s unable to speak lest he wishes to destroy everything around him is difficult. You have to rely on your physicality and inner emotional core to tell your story, without words. Mount makes it all look effortless, managing to convey a rich emotional journey for the King of the Inhumans. 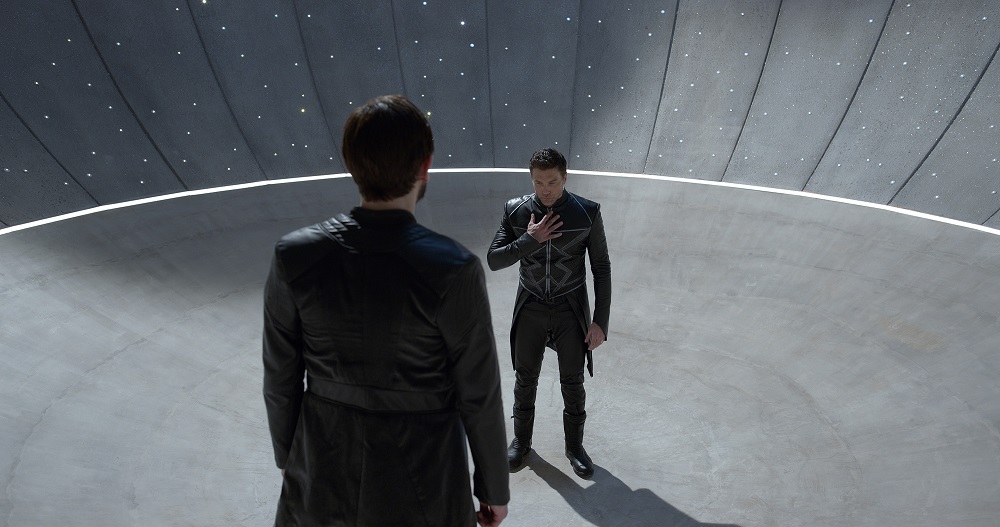 My second MVP pick goes to none other than Iwan Rheon. For those of you who are familiar with Rheon’s work, he’s no stranger to playing the villain, and is so adept at doing so. However, Ramsay Bolton is drastically different than Maximus. Bolton was inherently cruel and outwardly evil, whereas Maximus has charisma and even a touch of regret as the coup d’etat comes to pass. All of his actions can be justified by his desire to see the Inhumans live freely on Earth, and not hidden away on a space rock.

Rheon makes sure to play up this side of the character, almost making him a villain you can root for (almost – he’s still a villain after all). Maximus’s speech to the Attilan residents is reminiscent of Hitler’s speeches in Nazi Germany – charismatic, for one. Not to mention, with history repeating itself, it’s all too familiar today. My hat is off to Rheon for giving a multi-faceted, nuanced performance. 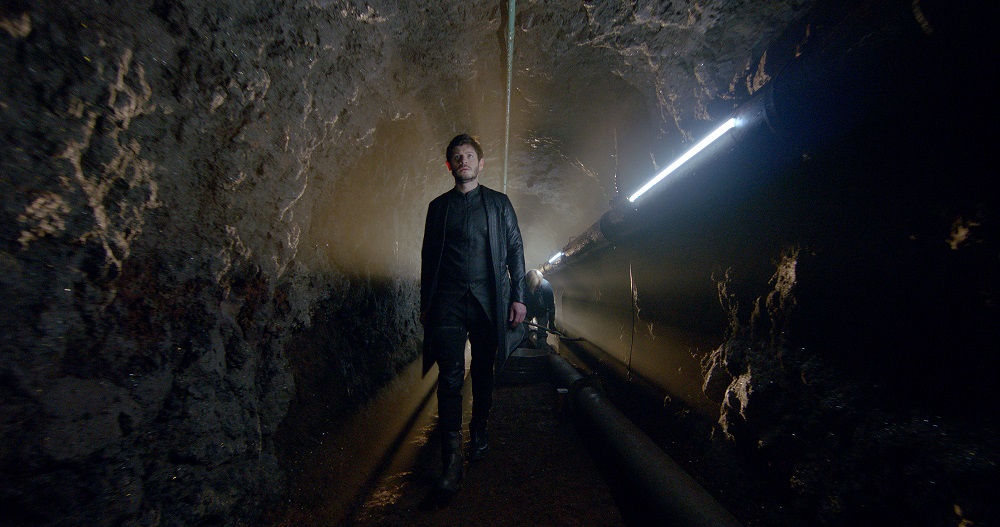 Walking through the Moon mines like a model on a runway.

Now, the action sequences are top notch here. Every bit the Marvel fights you’ve come to love. Of course, viewing them all via IMAX cameras make them that much better. I was very impressed with the cinematography, especially the IMAX quality to it (I’m easy to please in that regard). This is something that’s never been done in the Marvel TV universe. Also, the special effects as a whole are much better than the trailers portrayed.

Lastly, the score was fantastic. Similar to Agents of SHIELD but with more of a regal tone to it, as befitting the Royal Family of Attilan. My hat is off to Sean Callery, the composer.

Alright, folks, that’s all I wrote. While Inhumans had some rocky points (what pilot doesn’t?), there were beautiful moments that make me want to continue watching. Like I mentioned earlier, it’s that slow build up. “The First Chapter” ended with all of our heroes scattered in Hawaii attempting to reach each other, while Maximus wins more and more of the Inhumans to his cause. It’s a wonderful setup for the remainder of the series. Join me starting September 29th as I continue to recap Inhumans for Geek Girl Authority. I promise nothing but a good time for all.