Writer/director and actress Kathleen Davison has a haunting tale to tell, and it was told well as the closing night film for the NoHo Cinefest. But the new director will not settle on simple scares, blood and gruesome makeup effects. Instead, she’s far more interested in telling a good yarn with a dash of skepticism for the non-believers. Add to that a strong female character, some light humorous moments, the creation of a slow burn mystery that happens to have a more complex past from real life events, and one has the makings of a fascinating series rather than a stand-alone feature. 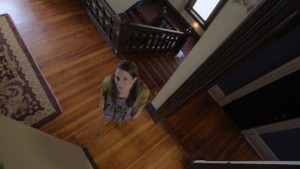 That’s right, Davison based her story “Primrose Lane” upon real-life hauntings that took place in the house she lived in for six years. If experiencing those weird goings-on were not enough, she and her crew faced the adversity of shooting in that very house as well. No, she was not out to make a cheap POV movie. Instead, Davison wanted to incorporate some of her real-life experiences (and those of her husband and kids) into an elaborate story of the uncanny.

A married couple, Robin (Davison) and Chris (Curtis Mark Williams), plan to spend the weekend with friends and their kids at a house that is about to go into foreclosure. No one seems to know what happened to the previous owners, and all the furniture has been left behind. Already, the questions start popping up. Once they arrive, they do not find their friends, but do find evidence that they’d been there. 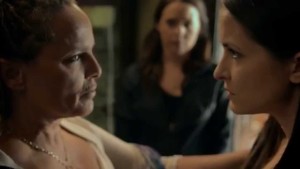 It is cause for concern, and they notify the police, but without any signs of a break in or struggle little more than a report can be generated. The couple decide to stay the night, and see if their friends show up later, and that’s when the eeriness strikes. Subtle sounds, reflections in mirrors of children from a bygone era, marbles rolling onto the floor, all give an effective creepy feeling.

From here SPOILERS are inevitable. So, if you are one that prefers to be surprised, I suggest you skip the rest of this paragraph. It’s not until Robin’s husband comes under attack, and the family dog disappears that Robin becomes concerned. Once hubby goes missing, all bets are off, and Robin embarks on her own investigation of the house with the help from a slightly kooky psychic played with disarming charm by April Matson, as Crystal, and an extremely funny Chris Chee as Joel, a New Age spiritualist. 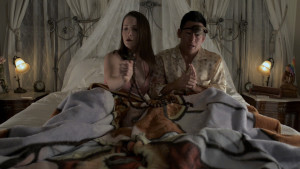 Matson and Chee bring a welcome lightness to it all and display an off-the-cuff humorous take which Davison herself displays as well in her more skeptical moments. Davison, the director does not mind having a little fun with the spooky scenarios which gives a certain warmth to the production as a whole.

This is not to say that “Primrose Lane” does not have its serious side. The haunts invite suspense, and the delving into the past tenants of the house in (I believe) a Victorian era via flashbacks does contain an air of mystery especially when we catch the past commingling with the present. Davison juggles all this nearly as well as all the hats she wears with this production. As a director and writer she brings a sense of class and avoids the schlock so commonly associated with haunted house movies.

For a low budget genre film “Primrose Lane” succeeds on many levels. But in this critic’s eyes there a couple of issues that if addressed could make the film better than it already is. The movie as a whole could benefit with tighter pacing in the editing room. The Victorian scenes seem a bit stiff, but that could be due to budget constraints. Also, the ending is abrupt, and to some off-putting. But that ending is also chilling and makes us want more. Not all the answers are there, and the movie cries out for either several sequels or to be turned into a mystery/thriller for the smaller screen. 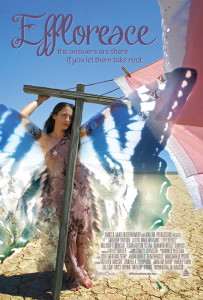 But what one has to admire about Davison is her careful handling of complex women’s roles that feel very personal in nature, and the way her stories tend to be multi-faceted. The writer/director displayed this knack as well with her first short film, “Effloresce” where she played a woman who suffered a miscarriage and broken engagement. Against her better judgement, her character decides to move next door to her ex in order to test her theory on re-purposed love. Sounds more like a feature than a short film. Yet somehow she gets it all to work in a mere 29 minutes while delivering a very compassionate portrayal of a woman attempting to tie all her loose ends.

“Primrose Lane” comes with goosebumps, and a whole lot more. In fact, there are so many interesting ideas in Davison’s film that one wishes it would be transferred to the smaller screen via Showtime, Netflix or even Amazon in order for it to really thrive. And, as an added bonus, perhaps the real-life paranormal investigators that were involved with the house could deliver a commentary show much like “The Talking Dead”. This appeared to work very well with closing night’s audience when the NoHo Cinefest hosted a Q&A with paranormal experts. Note: if it does end up as an episodic piece, the title will be “The Passage”.

Davison’s film has garnered much praise at several film festivals, including winning the 1st Place Audience Award and Best Director Nomination at the California Women’s Film Festival. Her film was also the big winner at the NoHo Cinefest claiming Best Feature, Best Director and nabbing a Nomination for Best Actress. “Primrose Lane” is more than a ghost story. It involves astral planes, skipping in-and-out of dimensions, and several mysteries we still have yet to unravel, which makes taking the visit all the more intriguing. To follow up on future screenings and to learn more about Kathleen Davison you can check out her websites, twitter, and Facebook accounts: