AMC’s HUMANS is a thought provoking story that focuses on the impact of artificial intelligence on modern society.

Artificial Intelligence (AI) storylines are very popular right now with the success of HBO’s Westworld, the Life Model Decoy storyline on Agents of SHIELD, and other tv and movies that have depicted life with robot companions.  Most of these shows center on the AI becoming self aware and how they react to the actual humans that control them.   In the movies, robots are created to help improve life for humans.  AIs don’t have an emotional connection to the humans they live among. At least, that’s how most stories begin.  As the story unfolds, the AIs become self aware, some try to take over the world and destroy it,  and some try to become human, with emotions and all.

Based on the Swedish series, Äkta Människor (real humans), AMC’s Humans is set in the present day where technology is more advanced.  Synthetics are very human-like robots. Their primary function is to assist their users in everyday tasks.  Synthetics are distinguishable by the unnatural color of their eyes, rigid movements, and perfectly enunciated speech.

Episode one introduces the audience to the people who have purchased and benefited from the synthetic assistant program, like the Hawkins family.  The Hawkins purchase a synthetic assistant that is more than she appears to be.  We see how attached some humans become to their synthetics.  Some people view synthetics as property and treat them badly.  There are four synthetics that have a secret.  Their secret will not remain hidden for long. 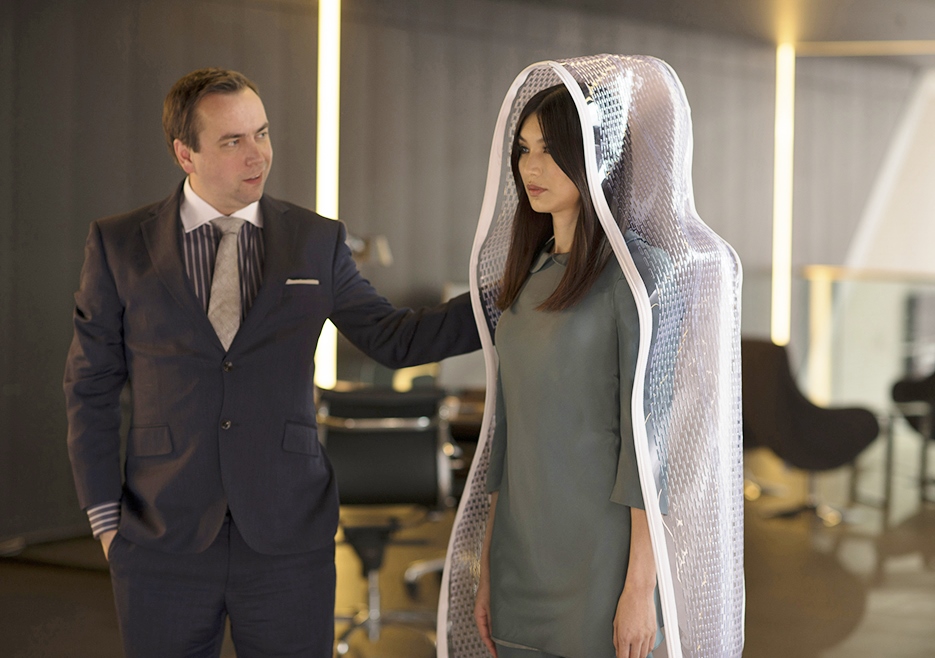 Joe (Tom Goodman-Hill) and Laura Hawkins (Katherine Parkinson) live in the suburbs of London with their three kids Mattie (Lucy Carless), Toby (Theo Stevenson), and Sophie (Pixie Davies).  Laura is a lawyer and is working on a big case that is keeping her away from home. Joe is running the household and decides that he needs some help.  He takes Sophie shopping for the latest technology in home assistance.  A synthetic life form, designed to assist their primary users in everyday household tasks.

Sophie immediately bonds with the synthetic.  Anita captivates Toby and Mattie is more interested in Anita’s programming.  And Laura, well, she immediately resents Joe for buying the synth.  Laura feels like she is being replaced. Joe says that he bought the synth to give them more time to spend with each other.  He thought it would bring them closer together.  After much discussion about keeping the robot, the family names the synth Anita (Gemma Chan).

Anita cleans the house, cooks all the meals, and even reads bedtime stories to Sophie. Laura is uncomfortable with how close Sophie becomes to Anita.  She does not like that Anita checks on Sophie when she sleeps. She reminds Anita that she is not to touch Sophie.

Mattie resents Anita for her own reasons.  Laura and Joe find out that she’s not doing well in school.  Mattie says it’s because school is not worth it anymore. Synthetics can do any job a human can do. She sees no point in doing well.

Laura keeps a close eye on Anita.   There are things that make still make Laura suspicious of Anita.  Laura asks Anita how she feels about a classical song that they are listening to. Anita says she doesn’t understand the question.  Sophie comes in for a hug and Anita accidentally burns Laura with a casserole just out of the oven.

The television hosts asks if synthetics will be able to feel. The expert says no because it’s something that even humans don’t understand.  Can they learn to love or experience fear, anger, violence?  Do computer have memories that they can forget? Could a conscience synth be able to dream?  No.

Later that night, Laura catches Anita outside of the house, staring at the moon.  She reprimands Anita for leaving the house after they are asleep.  Anita apologizes and says to Laura, ‘The moon is beautiful tonight, don’t you think?’

Laura is more suspicious.  Synthetics aren’t supposed to ask questions or have accidents.    Little does Laura know that Anita is experiencing memories. Anita sees glimpses of being underwater with someone. 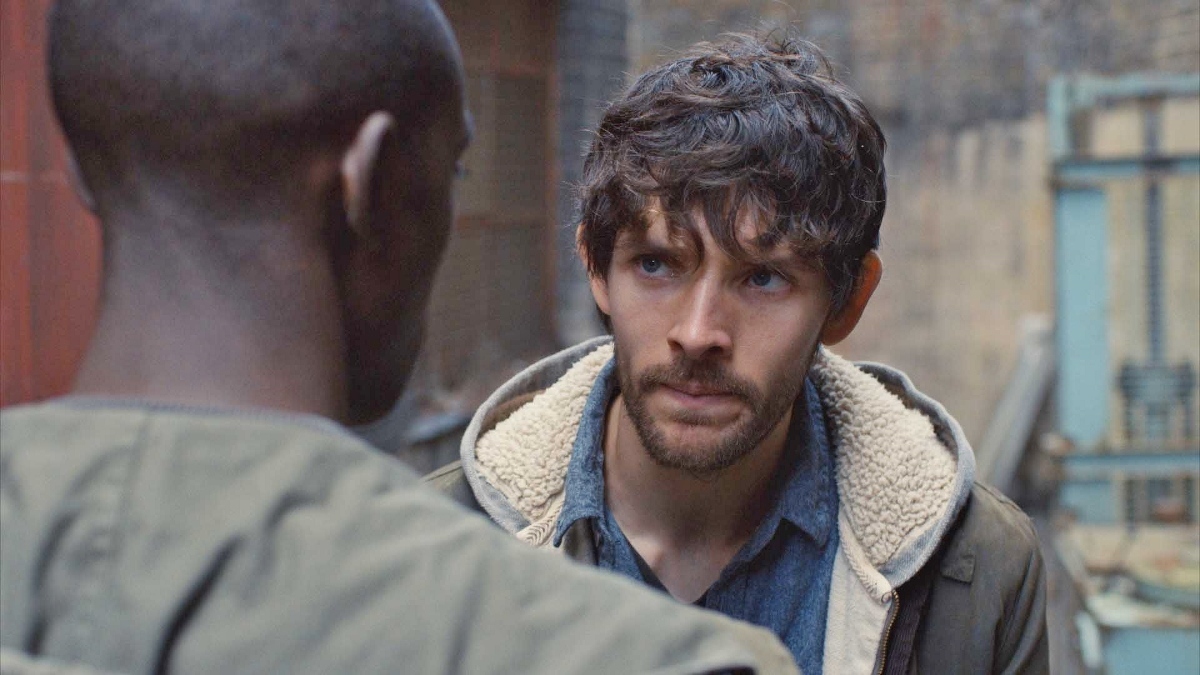 Flashback to five weeks ago

Anita is walking through the woods with other synthetics and a human.  They need to charge their batteries.  Leo (Colin Morgan) and Max (Ivano Jeremiah) split up to find resources and they others set up camp.  When Leo and Max find their camp, Anita, Fred (Sope Dirisu) and Niska (Emily Berrington) are gone.  Leo sees and chases after the men who took them.

Leo asks a local man if he has seen Anita.  The man used to steal and sell synths.  He tells Leo that a man named Silas Capek may have her. Max and Leo discuss that Anita is the only one of their group that hasn’t contacted them.

Leo has heard from Fred and they set up a rendezvous point to meet up.  Fred is working at the Leithridge Farm Foods Limited, picking fruit.  A man named Hobb (Danny Webb) approaches Fred and asks him about his primary users.  Hobb says he knows that Fred is different.  He found a cell phone behind Fred’s charging station.  Hobb wants to know what Fred is hiding.  He tells Fred not to run. Fred runs.  They shoot and deactivate Fred.  Hobb takes Fred in for examination.

Leo and Max are waiting for Fred.  Leo knows there is something wrong and they must leave.

Max and Leo continue their search for their friends. They go to a brothel.  The brothel is full of synths…including Niska.  Leo tells Niska that he can’t take her. There’s something wrong.  Niska says she will not stay there.  Leo told her to turn off her pain.  Niska replies that she was meant to feel. She tells him to leave.  He asks her to hold on just a little longer.

At a lab, Fred lies on an examination table. Hobb speaks to an executive that wants to study Fred.  They know that Fred can think and feel.  Hobb says he knew Fred’s creator, David Elster.  Elster’s goal was to create ‘machine life.’  He say Fred and others like him are dangerous.  He says the world is becoming dependent on synth technology.  If their technology surpasses human technology, they all can become conscious. And they won’t want to be slaves. 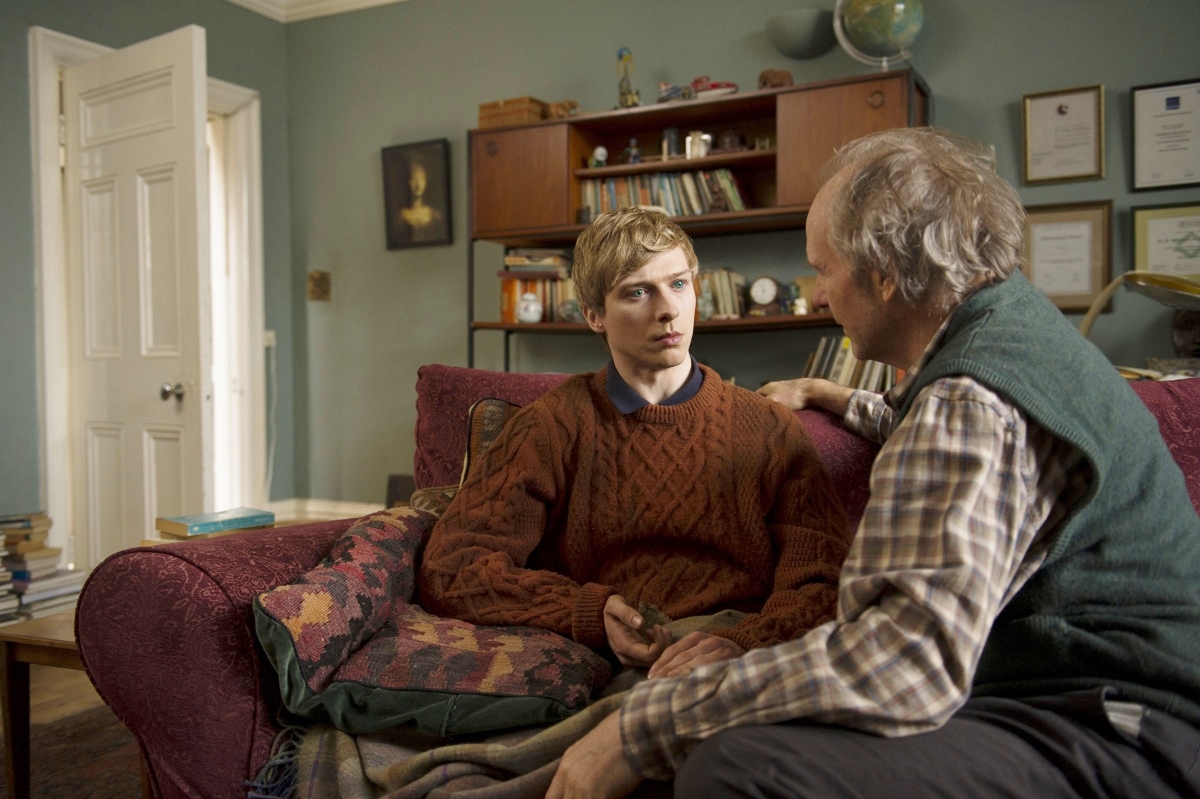 George (William Hurt) lives alone. He has an original series synthetic who helps him with his memory loss.  A caseworker from the health service that assigned the synthetic visits George. She says he’s ready for an upgrade. George doesn’t want an upgrade.  The caseworker says they will test his synth to determine if he needs an upgrade.

Odi (Will Tudor), George’s synthetic, holds a lot of memories for George, including memories of George’s wife Mary.  He is like a son to George.  Odi is an older model and is falling apart.

During a trip to the grocery store, Odi malfunctions and hits a store clerk. Members of the Special Technologies Task Force, Karen Voss (Ruth Bradley) and Peter Drummond (Neil Maskell) are called to deal with the synth.  There is a law about synthetics hurting humans.  Peter tells George that Odi will have to be scrapped for parts. Peter allows George to be able to take Odi to recycling.

George takes Odi home.  He has a hard time turning Odi on.  Odi starts working again.  George tests his memory.  Odi has lost some of his memories and his speech is messed up.  George decides to destroy Odi. He changes his mind when Odi tells him a story about Mary getting stung by a bee.  George is happy to have Odi back.

Peter returns home to his wife.  She is in a physical therapy session with her synth care provider, Simon.

Leo and Max continue to look for Mia.  Mia has to be Anita. She was the only other one taken from them in the woods.  Leo says he knows will find her because they love each other.

Anita watches Sophie sleep.  She takes Sophie from her bed. She walks out of the house and down the street.