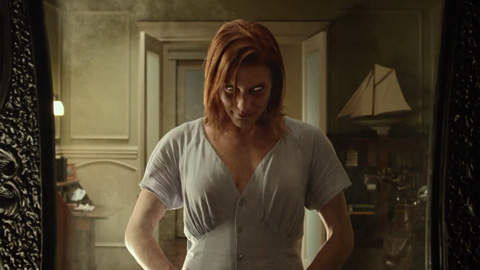 Horror Has a New Face

There’s a new horror auteur in town and he goes by the name of Mike Flanagan. Over the past fifteen years, culture in all its disguises has become predictable, mediocre and uninspiring. We’ve seen it all, heard it all, read it all and that landscape, once rich with gifted minds, has grown timid, smaller and less motivated. With the internet’s rapid cannibalization of all things artistic, it shrouded the ability to be creative, one, and be recognized for it, two. A perfect example of a this pre­-internet mining for talent and the unique stories of being discovered would be the tale of Vince Gilligan, the mastermind behind Breaking Bad. Back in 1993, Gilligan was an avid fan of The X­-Files and submitted a script to Fox which they loved and became the episode Soft Light in the second season. He went on to write twenty-nine more episodes and was made a producer on the show. Fast forward to 2016. That kind of talent find doesn’t happen anymore. That story might as well be urban legend. The internet’s dizzying effect has oversaturated an industry and turned it on its belly where anyone can be a star, a writer, an actor thanks to social media. But I digress. 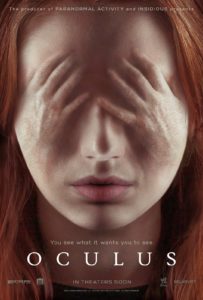 In my bloated NetFlix queue lived a movie called Oculus. I would stare at the title every time I would scroll with mindless boredom hoping to find something that would grab my attention. Even I am not removed from the grip of the world wide web. One night, tired of being so picky and embarrassed that I couldn’t make a decision with so many options, I decided with eyebrow raised reluctance to commit to Oculus. Over the years there had been some standout films but for the most part I had given up on the horror genre, a genre that had always been one of my favorites. Much to my surprise and delight, Oculus not only held my attention captive but it was smart. It had the guts to disregard the usual tropes that more recent filmmakers in this genre seem to live and breathe by. The script had the intelligence and flow of someone who loves to read books. The characters were fleshed out into people you quickly became invested in. And the story was clever, pulling from ghost stories and fables to create an antique mirror that harbors a malevolent and supernatural entity with the ability to poison the mind of those who look into it – an echo of the insecurities that plague all of us used masterfully as an object of terror. The film had an atmosphere of unease that was further heightened by its set design, editing and music. The beauty of this film is that the acting is solid with Rory Cochrane being the only recognizable name and the usual jump scares are absent or replaced as a visual point that you did not expect. I was left with that excited feeling of finding something new and promising. 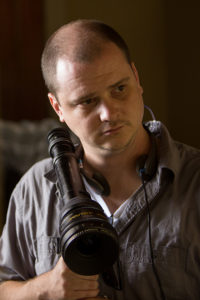 This led me on a quick hunt for any information on Mike Flanagan that I could gather and there isn’t much. He is a 37-year old son of a military father which has him born in Salem and then spending his youth in Baltimore and his teenage years attending Catholic High School. He went on to study film at Towson University in Maryland and createdOculus as a short film that was meant to serve as an anthology. He touted it at some film festivals but ultimately any interest came from taking the film away from him as director as well as wanting to manipulate the story to include the most inane of all storylines: the found footage rhetoric. Refusing to hand over his project with director credit, he walked away and created Absentia, which was to be his first full length film. He hired friends and family members to breathe life into this story as well as starting a Kickstarter campaign to help finance the effort. Absentiacost $70,000 to make and created a stir among the production companies. Flanagan wrote, directed and edited Absentia as well as his next two films. He held meetings with Intrepid and Relativity after the buzz of Absentia and was able to find financing that would allow him full creative control and turn Oculus into the full-length feature he always wanted to make. 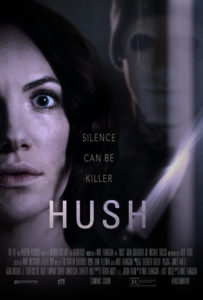 Shortly after watching Oculus, I was made aware of a somewhat secret project that he had been working on called Hush. It made its debut at Sundance and showed that Mike Flanagan was a legitimate force with Kate Siegel, Flanagan’s new bride as the star. Much like its classic predecessor, Dial M for Murder, the plot revolves around it’s victim’s disability. In this case, our main character is deaf and mute. The location, as in Dial M for Murder, is also a character. It is setup to accommodate and comfort the inhabitant’s daily living process. In Hush, this would be a cozy and remote house in the middle of the woods where our protagonist, Maddie, lives alone. She is a moderately successful writer and like those given the gift of storytelling, prefers to be in isolation. This isolation only reinforces the menace that you feel from the start of the film. Maddie is soon to be tormented by a strange and unstable man, played deliciously by John Gallagher Jr. Flanagan wastes no time in allowing both his audience and Maddie to discover Gallagher outside of the house. The mask he wears is shed quickly and his bold fearlessness, that and his terrifying crossbow, are laid bare for the remainder of the film. 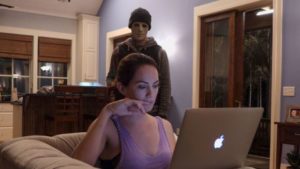 Again, Flanagan delivers to the genre an intelligent option. He uses sound or the lack of to fully understand the terror of the situation from Maddie’s perspective. Those noises we take for granted become a frightening soundtrack. Flanagan also limits the physical space of the cat and mouse stalking. We are either in the house or outside on the perimeter. It’s that claustrophobic feeling compounded with Maddie’s condition that made my skin crawl. Kate Siegel deserves heartfelt praise for this performance. Her ability to make Maddie real without words is remarkable. Facial expressions and body movements are crucial for this type of role and she pulls it off with an uncanny talent. I was so invested in her legitimacy to the disabilities that one of the most horrific scenes is when she is “screaming” and you realize that no sound is coming out of her mouth but I could feel the force of the scream convulse through her body. 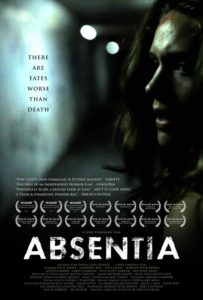 I completed the Flanagan trilogy with his first filmAbsentia, which, as mentioned above, bought him the attention and credibility he needed to finance his pet project, Oculus. Absentia was a solid and efficient film about a strange tunnel that borders an otherwise pleasant neighborhood. The story follows Tricia whose husband, Daniel, disappeared seven years prior trying to deal with the reality of not ever knowing what happened. Her troubled but loving sister Callie arrives to help Tricia begin to move on. Part of that process is having Daniel declared dead “in absentia” which is a legal presumption of death without direct proof of the person’s death. The quiet theme throughout this film is the grief of losing a loved one only intensified by not knowing what happened to them. This brings a special, unexpected dimension and humanity to the otherwise unnerving plot. 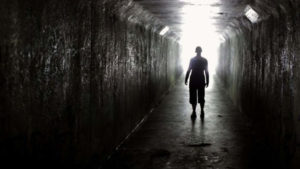 The tunnel seems to serve as a dimensional portal. As Callie settles in at her sister’s place, she begins her daily routine of literally running through her own demons and grounding her spirituality by taking a jog around the neighborhood. With headphones on, she passes into the tunnel, encountering what appears to be a homeless man who insists that he has disappeared, been taken, and that his family needs to know. Later that evening she returns to the tunnel leaving food for this man who is no longer there. The next day a garbage bag full of jewels is laying on the front porch which Callie promptly returns to the tunnel assuming it was placed there as gratitude in exchange for the food she left. The next day, she is shocked to find the bag is in her room. As the police are investigating the scene, considering it a break in, Daniel comes stumbling out of the tunnel, pale, gaunt, broken, headed towards the house. Chaos ensues as Tricia and the detectives are trying to figure out where he has been for seven years. He is traumatized and frightened, refusing to speak. What unfolds next is a supernatural tale with a Kafka-esque tone that leaves the viewer horrified and heartbroken. There are those of us on the planet that carry burden and pain with all the strength we can muster until we collapse. We hold on to the idea that things will get better, that we will make it through this shroud of darkness. But for some of us that never happens. This is the tragedy and the beauty of Flanagan’s film. He has deep respect for suffering and the human condition and translates it elegantly onto the silver screen in a genre that has been starved for intelligent content for years.

Mike Flanagan is a rare exception of talent and grit. He didn’t come from money or privilege. He makes his films his own way and refuses to bend to the Hollywood machine. This is what makes him an interesting player in a systematic game.

I read a lovely interview with him recently and he professed his love of Stephen King, crediting his writing as inspiration to make horror films with a soul. You can feel King’s influence in his storytelling, those layered complexities of the human spirit bringing you to your knees with heartbreak in the face of unimaginable terror. That’s King’s magic. So it would be serendipitous that Mike Flanagan was chosen to direct and write, with King himself, the adaptation of Gerald’s Game. Stephen King has been singing his praise over Hush and their future endeavor.

Although time has changed and the internet has hijacked culture, Mike Flanagan’s story still inspires hope that those with real vision can still be found in the midst of this homogenized chaos.