On Friday, the Wynonna Earp Season 2 trailer exploded onto the internet and brought with it a better look at the new season starting in a few weeks on Syfy.

“Remember who the real enemy is…”

Wynonna Earp is Wyatt Earp’s great-great-granddaughter. She has a curse that plagues her with the demons of her famous relative’s past. She also has a gun that sends those demons back to Hell. The new season trailer opens serenely on the front porch of the homestead with Wynonna (Melanie Scrofano) speaking to her sister, Waverly (Dominique Provost-Chalkley), over a cup of coffee, reminding her that the real enemy is the demons. The trailer then jumps into the action immediately with a punch thrown at the camera. 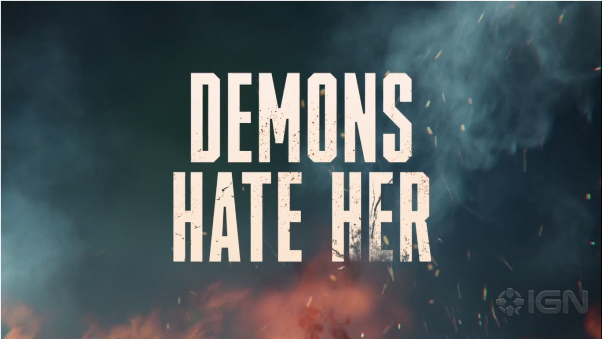 The trailer gives us a look at several of the demons coming. A prominently featured demon is a woman in black, first seen tearing into a victim’s neck and then sprinkled throughout walking, pacing, and watching. There’s also a scarecrow-like being climbing over a porch rail, a room of glowing eggs, and a big toothed, disfigured creature. A group of bird-like people ends up on the wrong side of an Earp meeting, but it is unclear whether they are actual birds or people wearing bird masks. In this world, it could be either option.

This is all in addition to yellow-eyed Agent Dolls (Shamier Anderson) and whatever has possession of Waverly.

Possessed or not, Waverly makes good on showrunner Emily Andras‘ (Lost Girl) promise of LGBT+ representation; she all but pounces on her girlfriend, Officer Nichole Haught (Katherine Barrell). She also appears to be dancing in a cheer-leading outfit for the uniformed officer.

The trailer promises a season full of explosive fun – and Doc Holliday (Tim Rozon) finally gets his dynamite, too! One of the coolest quick-clips of the short one-minute video: seeing Peacemaker as if Wynonna Earp were a first person shooter video game. 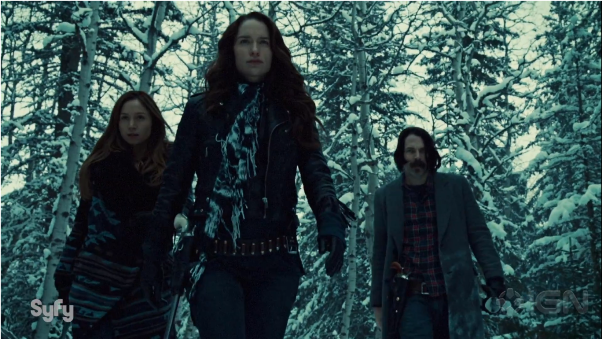 The second season, a total of 12 episodes, returns to Syfy on June 9th at 10/9c. There is still time to catch all 13 episodes of Season 1 on Netflix before then.

Watch the trailer below:

From Syfy:
Based on the IDW Comic, Wynonna Earp follows Wyatt Earp’s great-great-granddaughter as she battles demons and other creatures. With her unique abilities, demon-killing gun, Peacemaker, and a posse of dysfunctional allies, she’s the only thing that can bring the paranormal to justice.