HBO Has Fun With Our Favorite Characters in Recent Promos 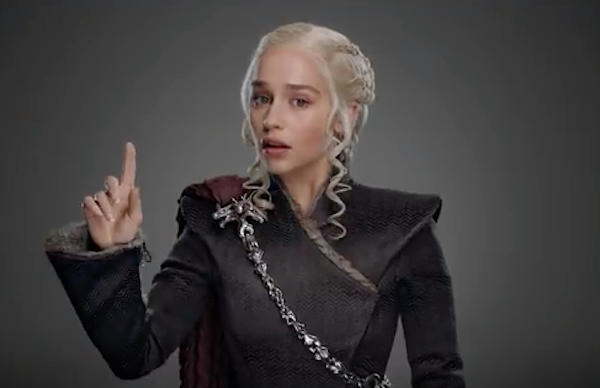 If you’re in need of a little dose of fun and silly like I am, HBO has what you need.  They came out with two light, fun little promos today called HBO: It’s What Connects Us (versions 1 and 2).  And, who doesn’t need a little unity in their life right about now?

The promos includes characters from Veep, Sesame Street, The Leftovers, Girls, Divorce,  Silicon Valley, Insecure, Game of Thrones, among others all attempting to recreate the iconic ‘tune-in’ tone from the opening of every HBO show ever.

RELATED:  What We Saw (and Heard) in the GAME OF THRONES Season 7 Teaser ‘Long Walk’

My favorites?  Every single appearance of a Game of Thrones character made me so happy and so thrilled, I couldn’t take it.  Yes, it may be because I am SO EXCITED for Season 7 to start.  But, they did an awesome job with each character.  We see Jamie Lannister saying ‘ah’ at his ‘hand’, Daenerys (dressed regally for winter… just saying) lets the dragons speak for her, you see Thorin, Sansa, Tyrion, Aria, the Hound, the three-eyed raven, Jon Snow, and Hodor!  Gold, every appearance.  Special recognition definitely goes to The Leftovers and Veep, who also had some awesome and hilarious showings.

Take a look and take a breath.  It’s nice to have a break.  Thanks, HBO.