The cement battleground at the center of UA High’s stadium is freshly cured after necessary repairs. Two challengers step into the ring, both inheritors of the abilities of the world’s top two heroes. In this first fight of the tournament’s second round, Izuku Midoriya (Daiki Yamashita) faces off against Shoto Todoroki (Yuki Kaji). Can these boys fight with all their hearts without succumbing to the pressure of their elders’ ambitions?

An interesting aspect of this fight is the perception — or really lack thereof — of the power imbalance at play. In the last fight, most of the audience (and even Present Mic) perceived a clear disparity between the abilities of Ochaco Uraraka (Ayane Sakura) and Katsuki Bakugo (Nobuhiko Okamoto). Even as Ochaco fearlessly charged in again and again, carefully setting up a clever plan that (though ineffective) pushed Bakugo’s abilities to their limit. While Katsuki was forced to appreciate the skill and passion of his opponent, the audience was mostly clueless, begging for the brutality to end.

While their attitudes could be brushed aside as a reaction to the pure intimidation and fury of Bakugo’s countenance, it’s hard to buy that this was little more than people being afraid the cute girl was no match for the angry boy. This superficial dismissal of Uraraka seems to solidify in light of Izuku’s treatment. So far, only a single person — Endeavor — has meaningfully observed anything about Izuku’s Quirk. He got through the obstacle course with a clever trick, and through the Cavalry Battle thanks to the work of his teammates, including Ochaco Uraraka. He showed guts in the first round of the fighting tournament, but the subtle burst of air he blasted from his finger was hardly a display of power.

Todoroki, on the other hand, breezed through every challenge with a cool demeanor befitting of his icy Quirk. He won his first round in the tournament by instantaneously sealing his opponent in a glacier. If you look at the expectations these students have set, Izuku has, at most, proven to be clever and tenacious; Todoroki has proven to be absurdly, overwhelmingly, effortlessly powerful. That anyone thinks Izuku has a shot, let alone that he’s a viable match for Todoroki, speaks to the disparity in expected prowess between a scrawny boy and a cute girl.

Nevertheless, we all know what Izuku is really capable of, even if the audience doesn’t (and shouldn’t). If only the same were true for Todoroki. As Izuku notes to himself before the fight starts, Todoroki’s weaknesses and limitations are still very vague. Shoto’s Quirk is so incredibly quick and effective that he ends every fight as soon as it begins, leaving little time to observe flaws or… quirks. That speed is the one thing Izuku can count on, though, and he steels himself to counter it right from the start.

The fight begins, carrying the weight of two boys’ ambition, and the ambitions of those who came before them. While All Might (Kenta Miyake) and Izuku share a complementary worldview, Shoto’s relationship with his father is far more difficult. He is besought by memories of his youth — the traumas that shaped his desires, and his relationship with Endeavor (Tetsu Inada).

A while back, we learned that Endeavor’s marriage was arranged specifically to enhance the Quirks of his children. In Todoroki’s memories, we see the single minded brutality of the Flame Hero, as he emotionally and physically abuses his wife and son. Shoto’s mother (Michiko Neya) is his only escape from the harsh martial training forced by his father. As his training progresses, however, he and his mother’s traumas compound. The more time Shoto spends with his father, the more his fraying mother believes her son will turn rotten. She boils a kettle of water while begging her mother over the phone to get her out of this hellish existence. 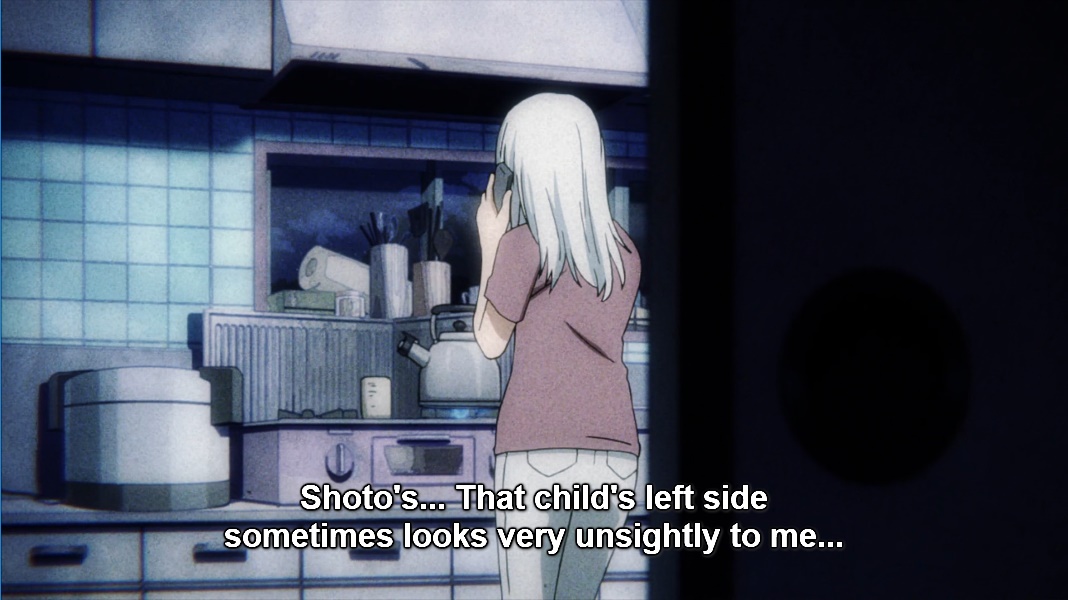 When she sees Todoroki eavesdropping, she snaps. The scene isn’t depicted, but the aftermath is. Bandages cover the side of his face where his mother scalded him, and Shoto asks his father where she’s gone. Endeavor had her committed and, unsurprisingly, doesn’t seem too broken up about it. Why would he be? He didn’t marry her for love, and now his harsh tutelage can continue unabated.

And so, Shoto Todoroki’s heart froze. He spent the rest of his life denying the fire inherited from his father, relying only on his mother’s ice. He’s determined to surpass both his father and All Might, and to do so without letting Endeavor see any of himself in his son. With that ice, he lashes out at Izuku, sending a cascade of icicles sprouting at his opponent. With little time to react and no room for half measures, Izuku sacrifices a finger to blast the ice away. The force is impressive, and from the start everyone is totally psyched for this fight.

Izuku isn’t the only one with clever observations, though. Todoroki has at least a basic grasp on the threat posed by Izuku’s gusts of wind, and compensates by bolstering himself with an ice wall, preventing the wind from blowing him out of bounds. He and Izuku continue these exchanges; a blast of ice shards knocked away by another gust of air. Each time, more frost creeps over Todoroki’s skin, and darker bruises mark Izuku’s hands. Sensing an opening, Todoroki forms an ice ramp and sprints to the top. Izuku sacrifices another finger to blast it away, but Todoroki’s already on top of him. 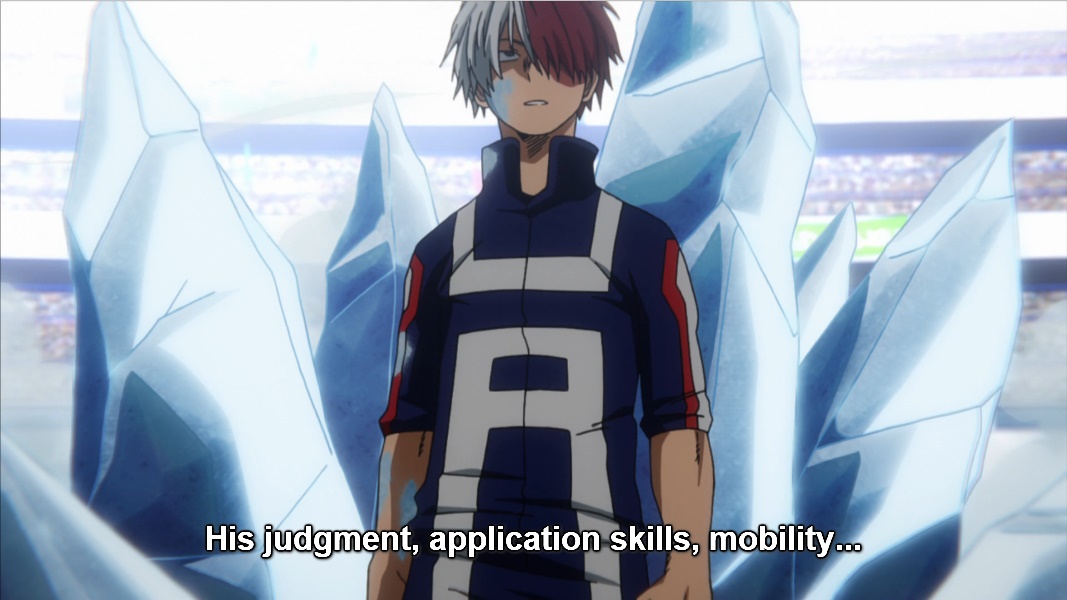 There isn’t enough time for Izuku to dodge, and as he tries to scamper away, Todoroki’s ice catches his foot. In desperation, Izuku charges his entire left arm with his Quirk, blasting himself free and opening up some breathing room. Again, Todoroki saves himself from being pushed out of bounds by creating an ice barrier. Seeing Izuku’s increasing thrashed limbs, he’s starting to settle in to his advantage. He doesn’t even seem to notice how obviously the frost is building up on his skin. Izuku notices. Satisfied with the dismissal he’s shown his father, Todoroki is ready to end the fight. With arms so badly damaged, how could Izuku muster a defense, let alone an attack. Another wave of icicles lunges toward the battered boy.

If there’s one thing Izuku (or any shonen protagonist, really) hates, it’s being underestimated. The ice shatters, once again… this time with a smash from one of Izuku’s already broken fingers. He has no taste for Todoroki’s casual certitude. Hoping to test his theory about the frost and to get Shoto in punching range, Izuku stokes his challenger’s rage. He chastises Todoroki for thinking he can win this competition — this tournament where everyone else is giving their all — while using only half of his Quirk. He, correctly, points out that Todoroki hasn’t put a single scratch on him.

Should this fight end, it won’t simply be about a boy showing up his abusive father while everyone else acts as props in their drama. Quirks, though fantastical and often outlandish, are ultimately just physical abilities. Like any other physical ability, there’s always a cost and always a limit. Still caked in frost, Todoroki refuses to thaw himself and rushes at Izuku to justify his cause. As Izuku hoped, Todoroki’s movements are slower and sloppier. Izuku finds his opening, and with his still functional right arm lays a smash right into Todoroki’s gut. It’s not enough to push him out of bounds, but it’s a sufficient wake-up call.

Beyond trying to wake Todoroki to the flaw in his quiet arrogance, Izuku wants his classmate to wake to his full potential, free of the burden of his lineage. Regardless of Endeavor’s desires, that Quirk burns within Todoroki. Its potential is only defined by its wielder, and so long as Todoroki ignores that potential, he’ll be stunted both physically and emotionally. Todoroki gets it. His left side ignites, and in the stands his father goes wild to an uncomfortable degree. 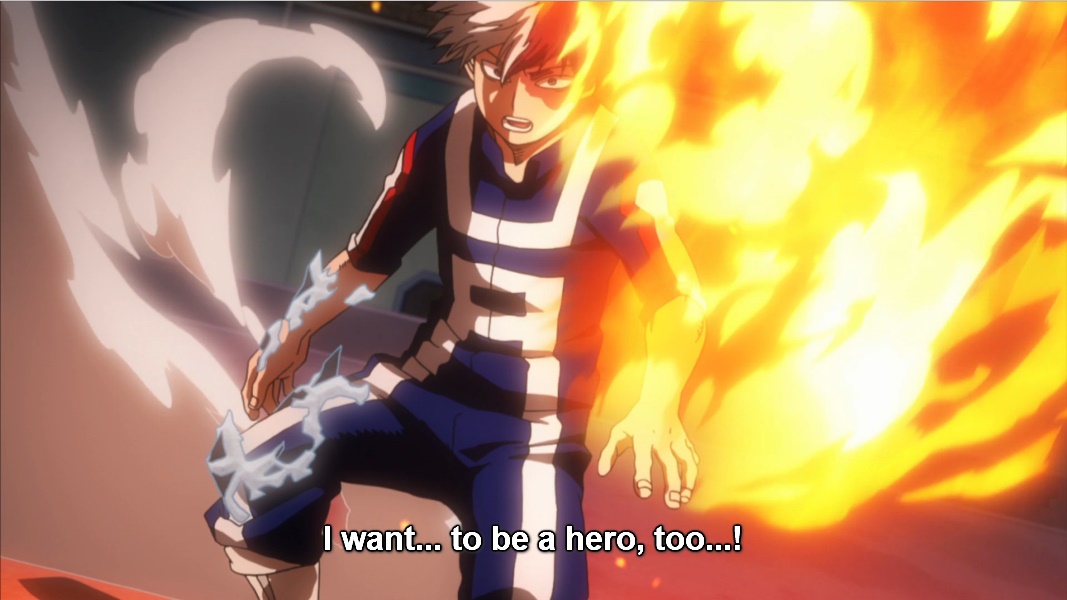 With everything they have, Izuku and Todoroki charge one another; Izuku’s arm charged with a full strength smash, and Todoroki’s with a raging inferno. The faculty briefly panics at the impending danger as the boys collide. An devastating explosion fills the field. The dust clears and, once again, Todoroki kept himself in bounds with an ice barricade, but Izuku is slumped against the stadium wall at the edge of the field. Using the full extent of his Quirk, Todoroki advances to the next round. 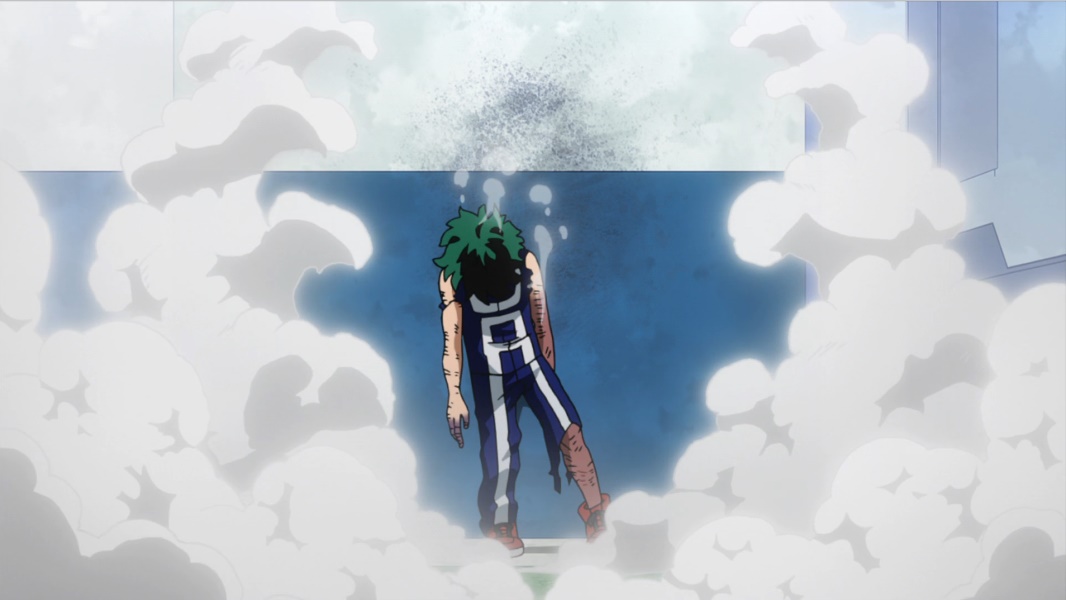