The motivations driving many of UA High’s students remain a mystery. Who the heck is this constantly silent angular guy? What’s up with the kid with a bird head? Is Bakugo really only driven by self satisfaction? Why the hell did Mineta enroll in the Hero course? None of these mysteries are solved this week, but we do see the flames burning in the icy heart of Todoroki, revealing a tie that binds much of the core cast. 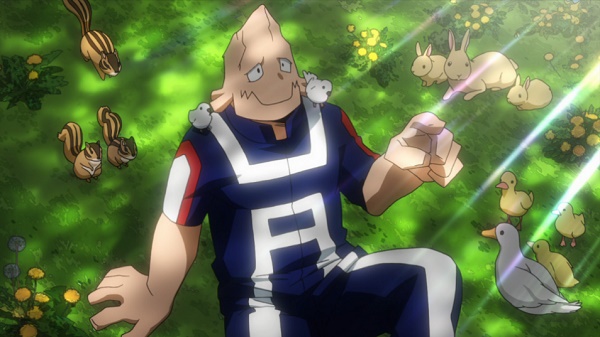 Like Tenya Iida, Ochaco Uraraka and Izuku Midoriya, Shouto Todoroki is pushed forward by the weight of legacy. While his burden of familial heroism may be most similar to Iida’s, it’s in Izuku that he finds a rival.

It’s the first day of the UA Sports Festival and tensions are high. It’s an annual opportunity for students to prove their worth to talent scouts for professional hero agencies– an opportunity they’ll only have three times. Beyond the stratification across the three grades, students at UA are also split across three educational tracks. The favored, like the students of class 1-A, are on the Hero track, and are broadly envied by the students on the General Studies track. A supremely proficient (or deficient) performance at the Sports Festival could swap the fates of students in these courses. Then, there are the students of the Support and Management tracks. It definitely seems odd to have the kids aspiring to desk jobs squaring off with kids who topple buildings, but spirits seem high regardless.

One such high spirit is a purple haired boy from the General Studies track. As students crowd around the door to Class 1-A to gawk at the prospective students who fought off the League of Villains, this apparent jerk seems set on taking someone’s seat through victory at the festival. Dismissive as ever, but far more calm than usual, Bakugo brushes off the mob. His bravado may have been tempered by witnessing the overwhelming power of his classmates, and losing a challenge to Izuku, he’s still single minded in his ambition. 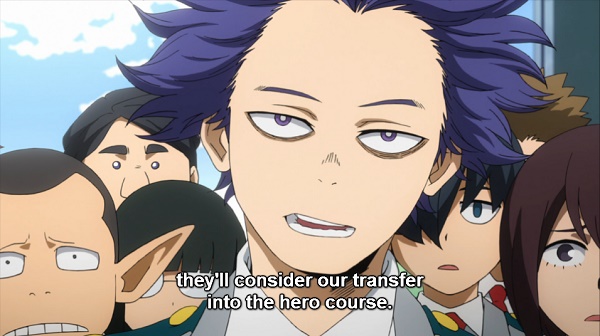 Whatever weight Bakugo carries, he only ever admits his desire to be the number one hero. His strongest competitors openly have more on their minds. Last week, All Might tasked Izuku with using the festival to show the world who he is– to make his name as the new Symbol of Peace. Given how limited his control of his Quirk is, getting through the whole festival intact seems like a tall order. All Might’s confidence in young Midoriya has at least been enough to draw some attention. Todoroki noticed it in the last episode, and now he acts on his concerns. Though Izuku doesn’t quite stack up to Todoroki’s prowess, his relationship with All Might must suggest a threatening potential. 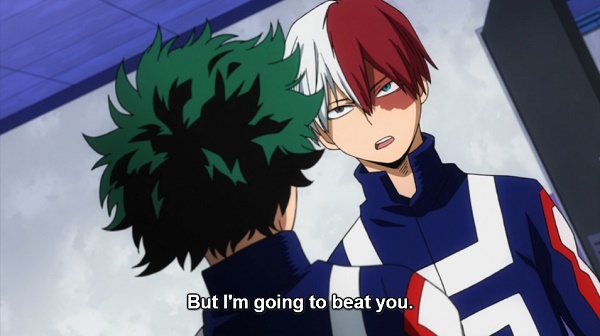 With thousands of fans filling the stadium, the first year students of UA High gather on the field to hear the “Hero’s Pledge.” The honor of reciting the pledge falls on Bakugo who seizes the moment: “I pledge to be number one.” Once everyone’s recovered from the boy’s brashness, the vaguely bondage themed R Rated Hero, Miss Midnight (because anime) goes on to explain the first event. All of the first year students will partake in an all out scramble through an obstacle course that encircles the stadium. 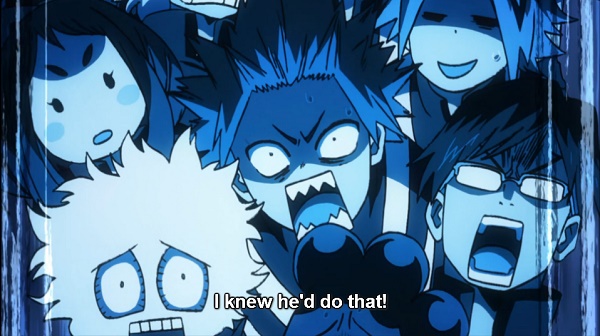 Bakugo shocks everyone by shocking no one.

Even if he’s proven to be the most overwhelmingly powerful student in Class 1-A, Todoroki still has something to prove to his parents. Early on, it was established that children usually inherit one of their parents’ Quirks, or some combination of the two. There’s likely no more essential distillation of this concept than Todoroki’s control of heat and cold. The swarm of students crushes through the narrow exit– the first obstacle. As the path widens outside of the stadium, they slip and stumble on ice. Todoroki has already taken an early lead, and has added an obstacle of his own. A handful of students keep their footing. The angry purple haired boy rides on the shoulders of a seemingly bewitched group of classmates. Mineta springs from one of his bouncy balls to another, but a green metal arm sends him reeling like a doofus. 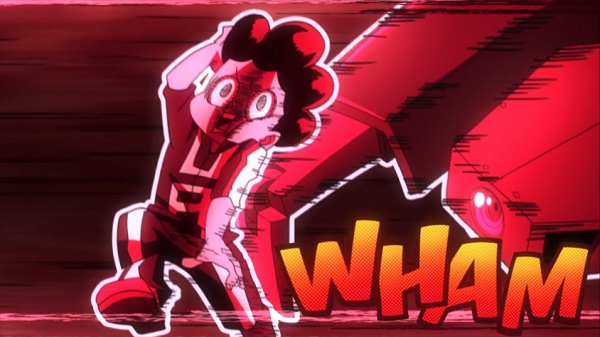 At the end of Todoroki’s icy path, the students are confronted by a group of robots– the same types they face in the entrance exam, only now backed by a trio of machines like the one Izuku toppled. This time, the toppling is handled by Todoroki. With a sweep of his hand, all of the robots are halted by a wave of ice. He slips between their legs, but before anyone can follow the robots tumble into an obstructive heap.

Though he controls both heat and cold, Todoroki pointedly favors ice. Many students at UA have famous parents, and Todoroki is here to prove something to his.

Only one more day until we can uncover all the answers to #ResidentEvilVillage! Did you see the final launch trailer?