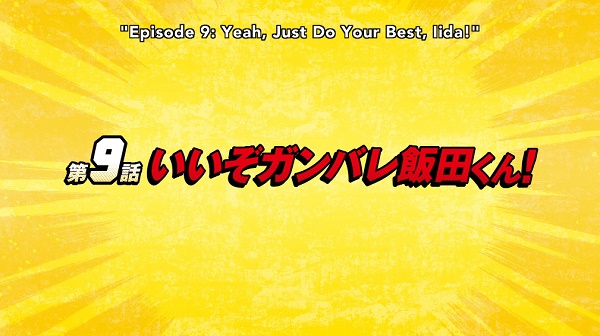 This week, Tenya Iida suggests an election for class representatives, and the media has finally caught the scent of UA’s most famous teacher: All Might. Following that whiff, reporters crowd around the school’s entrance, grilling a succession of students for juicy scoops on the Symbol of Peace.

The kids aren’t delivering anything newsworthy and All Might isn’t scheduled to teach today. Determined to make the most of this dismal news day, a reporter charges the entrance only to be locked out by an automated protective metal wall. Only faculty, students and guests are allowed on campus, and the “UA Barrier” maintains that security. It doesn’t seem too tall for someone with a growth, flight, or leaping Quirk to pop over, but that seems so obvious that I must assume there’s more to the school’s defenses (or is there???). 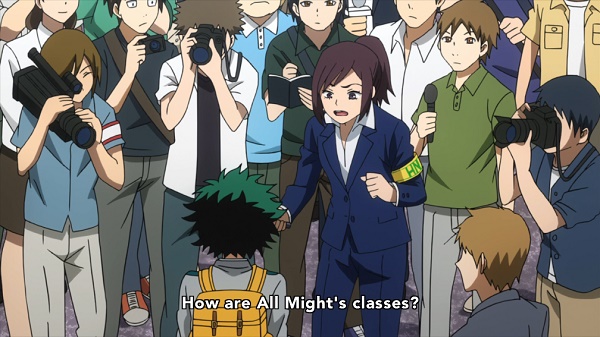 Homeroom teacher Shouta Aizawa instructs his class to elect two representatives. In a normal class, student council responsibilities would fall to a handful of students interested in cultivating authority. In the most prestigious hero high school, every student believes they’re the destined leader of a super group. Ever thoughtful, Iida commands the attention of the class and calls for a vote. The ambition and narcissism that drive these students to be the best also drive them to vote almost exclusively for themselves. With most of the class voting themselves into a tie, Momo Yaoyorozu and Izuku Midoriya are the only students to receive multiple votes– Iida gets zero.

Momo is obviously deserving of the role, having been specially recruited by UA and having shown an exceptional tactical prowess in the last test. Izuku is considerably less suited to the role. As soon as he’s elected, he starts buckling under the pressure. 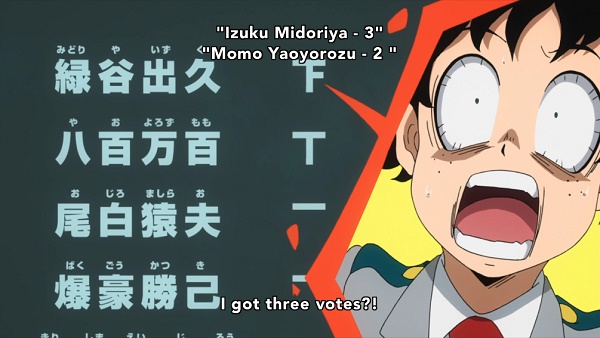 Sirens blare. Someone has slipped past the UA barrier and, fearing villains, panicked students pack the halls trying to push through the exit. The crowd is in danger of causing a fatal crush, and Iida knows it. Out the window, he spots reporters stalking around school grounds. Judging that the students are overreacting to a dangerous degree, Iida figures he needs to reach a high vantage point so he can get the frightened mass’ attention. Spinning through the air propelled by his engine legs, he slams in to the wall above the exit. The crowd notices. 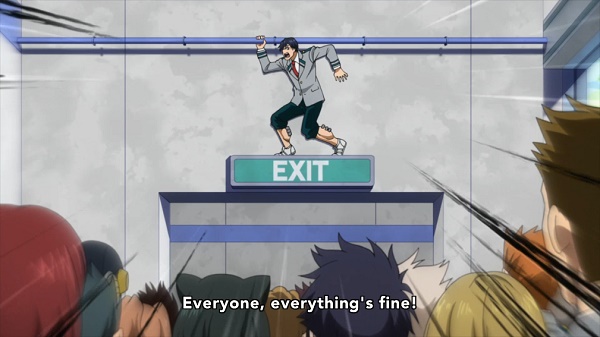 With the crush’s attention fixed on him, Iida shouts that there are no villains. The alarm was set off by the media, so everyone should calm down. They do. Heads cool and everyone heads back to class, shaking off the fear of the moment prior. They don’t see the faculty surveying a hole smashed in the UA Barrier. The news crews scrambled through that hole, but they definitely didn’t make it. 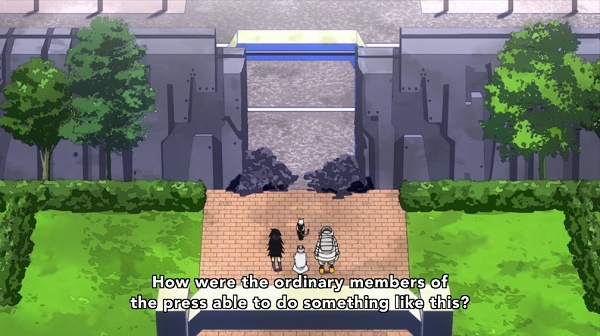 More certain than ever of his undeserving place representing his class, Izuku speaks to his fellow students. Beyond not being the right person for the job, Izuku– and everyone else– witnessed the cool headed commanding actions of the person most deserving of the title: Tenya Iida. Honored, Iida accepts the role, and everyone continues giving the severely overqualified Momo short shrift. With the crisis behind them, the students are herded on to buses for a field trip.

At the “Unforeseen Simulation Joint,” or “USJ,” they can train in a variety of unique environments and circumstances. The massive domed building contains simulated training environments like a lake, a crumbling city, and mountainous terrain. Lead by Space Hero 13, they will be tested. 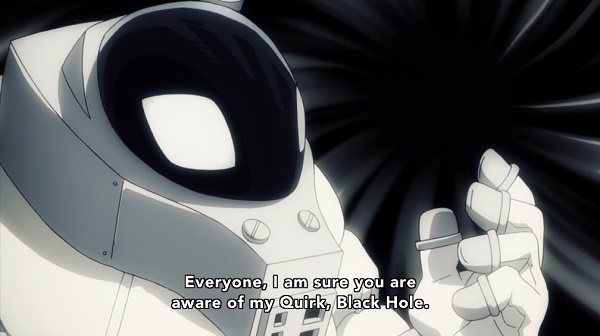