There’s some old superhero saying about power and responsibility, but it’s hard to grasp as a teen; particularly when that power if brand new. When Izuku Midoriya (Daiki Yamashita) was a Quirkless fanboy, he was capable of reacting on impulse while still basing his actions on years of research and preparation. In the first match of the UA Sports Festival fighting tournament, Hitoshi Shinso (Wataru Hatano) exposes a new gap in Izuku’s knowledge-armor. Though his classmate, Mashirao Ojiro (Kosuke Miyoshi), carefully explained everything he had observed about Shinso’s Quirk, that’s all dashed aside as Shinso provokes Izuku. 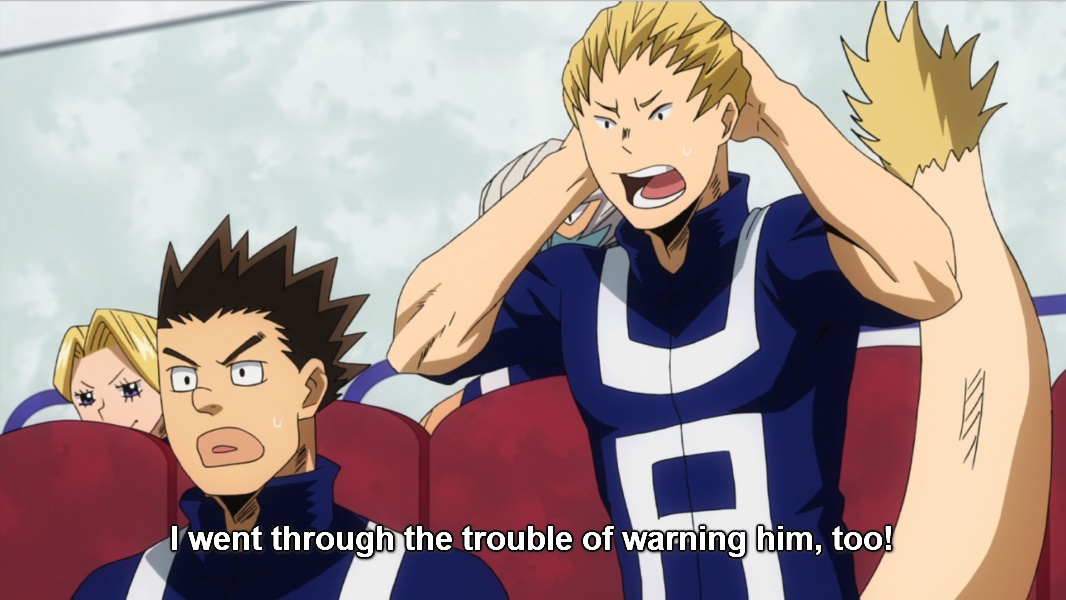 Shinso’s Quirk isn’t particularly flashy, but it is terrifying. All one has to do is respond when Shinso asks a question and, just like that, he takes control of your body. It’s an easy enough trap to avoid once you see it, and yet Izuku leaps right in. As soon as the match starts, it appears to be over. Responding to Shinso’s insults, Izuku forfeits control of himself and complies with a command to walk out of bounds. The audience watches in stunned silence as Izuku nears the edge of the ring, but that final footstep falls slowly.

Along with the trigger for Shinso’s Quirk, Mashirao explained what he believed to be an escape. In the Cavalry Battle, someone bumped his shoulder and he believes the physical shock broke the hypnotism. Straining to stop his hijacked body, Izuku’s vision fills with the rainbow streaks of his Quirk, All For One. In the darkness of the stadium’s entrance tunnel, he glimpses shadowy specters, and his fingers begin to glow. Whatever this vision is, it opens a wide enough crack in Shinso’s control for Izuku to release a blast of his power, shocking him free. 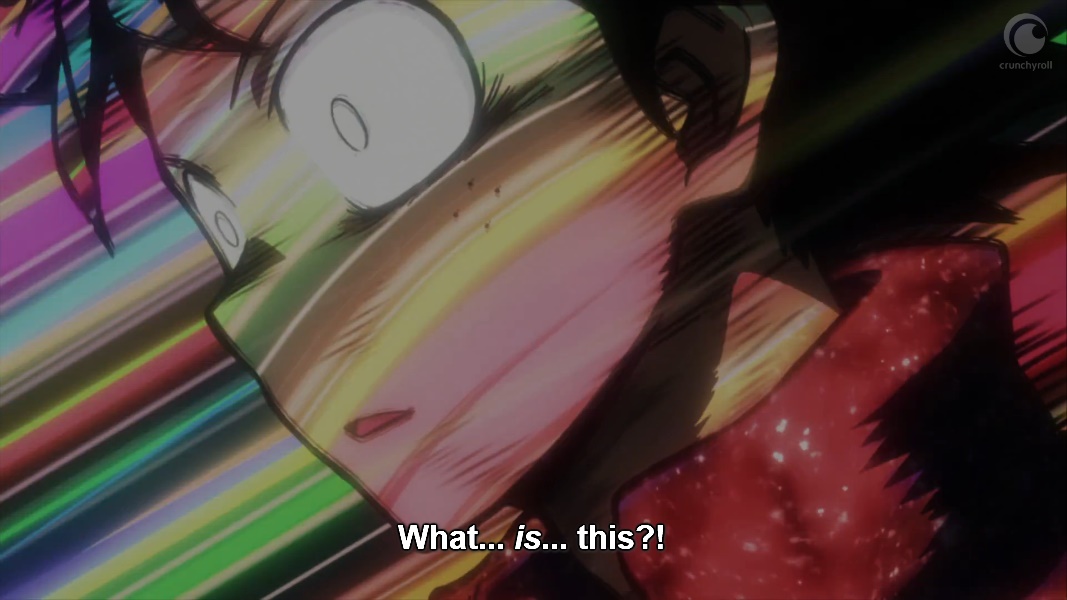 The crowd goes wild, and Izuku goes on the attack. Shinso isn’t a fighter and Izuku isn’t a sadist, so rather than pummel the brainwasher, Izuku simply grabs hold of him and pushes him toward the boundary. Fighter or no, Shinso repeatedly punches Izuku, desperately trying to halt his progress, but a final shoulder throw sends Ol’ Purple Hair out of bounds. As he lays there in defeat, he recalls his days in middle school.

People were always impressed by Shinso’s Quirk, but were also understandably afraid. He appreciated his own potential, but hated the perception that his Quirk was made for villainy. To prove everyone wrong, he strove to become the greatest Hero.

Unfortunately, as Aizawa (Junichi Suwabe) points out, the UA Hero Course exam is rather unfair to non-physical Quirks like Shinso’s. While super strength and ice powers are really effective for killing robots, mind control falls short. This Sports Festival is Shinso’s chance to bypass the faulty test and earn his way into the Hero Course. Though he seems depressed in defeat, his General Studies classmates rush to the railing to cheer him on. They declare him their class’ hero, and point out all the impressed murmuring coming from the professional Heroes in the audience. 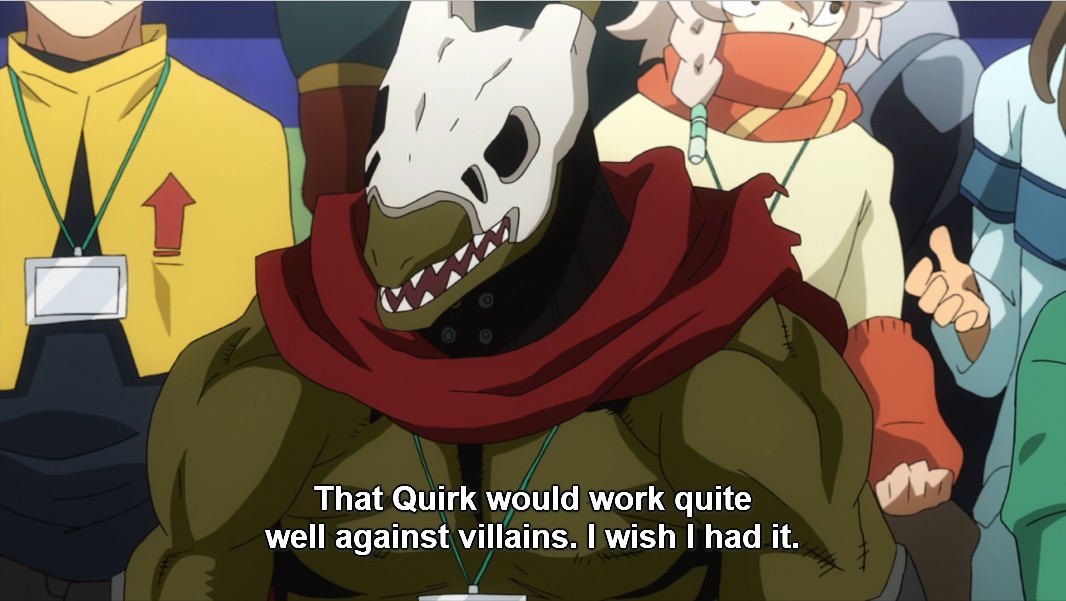 You said it, Adult Cubone

A decisive victory would get him there the quickest, but he believes his performance so far might be enough. At the very least, he won’t have to fight Shoto Todoroki (Yuki Kaji). At the nurse’s office, Recovery Girl (Etsuko Kozakura) fixes the combatants injuries.

While Izuku gets patched up, he asks All Might about the spectral forms that helped him break free from Shinso’s influence. He mentions that one of the ethereal forms had eyes like All Might’s. The Symbol of Peace clumsily evades the topic, first acting like it’s something weird and spooky, then acting like it’s something familiar and meaningless. Maybe it was spooky ghosts! Maybe it was remnant thoughts of All For One’s previous stewards igniting emotions within Izuku and allowing him to free himself. Either way, All Might assures his pupil that it’s just a sign of his growing mastery of their shared Quirk. This answer does not satisfy Izuku’s curiosity, but he lets it slide as he scrambles back to the stadium.

Alone together, Recover Girl repeats Izuku’s observation: he saw All Might among the ghosts. All Might simply responds that this is a “good thing,” and this is now the whole episode. Nothing else matters. I mean, I assume it’ll still be a while before All Might dies, but that’s certainly what’s being discussed, here. He knows he’s dying and he knows that Izuku seeing his ghostly form is some sort of good sign about his student’s progress toward assuming his mantle. His approach to legacy is a lot more caring than that of a certain jerk. While that notorious burning a-hole will sacrifice any relationship to glorify himself, the unspoken cost of All Might’s legacy is that he must die for it to fully pass to Izuku. 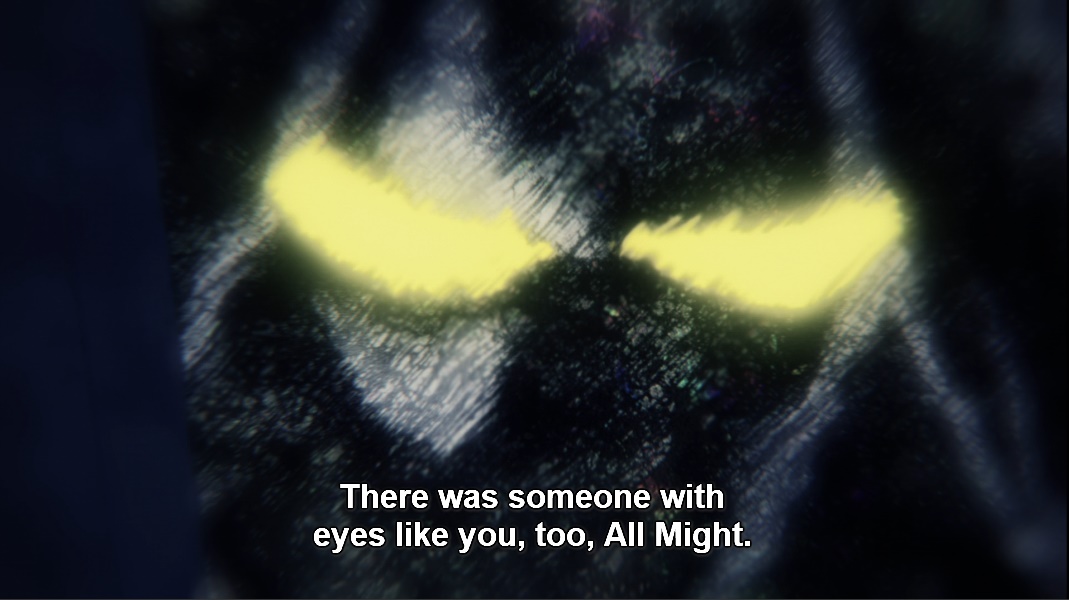 The burning a-hole, Endeavor (Tetsu Inada), waits for his son in the entrance tunnel, hoping to enforce some control over Todoroki’s future. The boy was specifically bred to be the best of both Quirks, but his hatred of Endeavor continues to stifle half of his ability. Its a well earned hatred, though, and Todoroki is determined to prove that his control of fire is as much of a waste as his father’s ambition.

Todoroki’s opponent is Hanta Sero (Kiyotaka Furushima), an affable boy who shoots tape from his elbows. What follows is a bout that’s justified by the context, but is still a disappointment — for both me and the fictional audience. This is totally the sort of scenario where I expected an unremarkable underdog like Sero to prove his worth by at least going the distance. It might have been cool to see Todoroki caught off guard by some clever trick or secret ability Sero had up his elbow, but Todoroki has family drama that takes precedent.

Sero starts well, binding Todoroki in tape and swinging him toward the boundary line, but it’s all he’ll get to do. As Quickly as Sero’s tape bound Todoroki, it is frozen. Sero is frozen. Most of the stadium is frozen. In a blink, Todoroki filled the field with a glacier that towers above the highest seats. Unable to move, Sero loses, and Todoroki sets to thawing him out while apologizing. “Sorry, I was angry.” 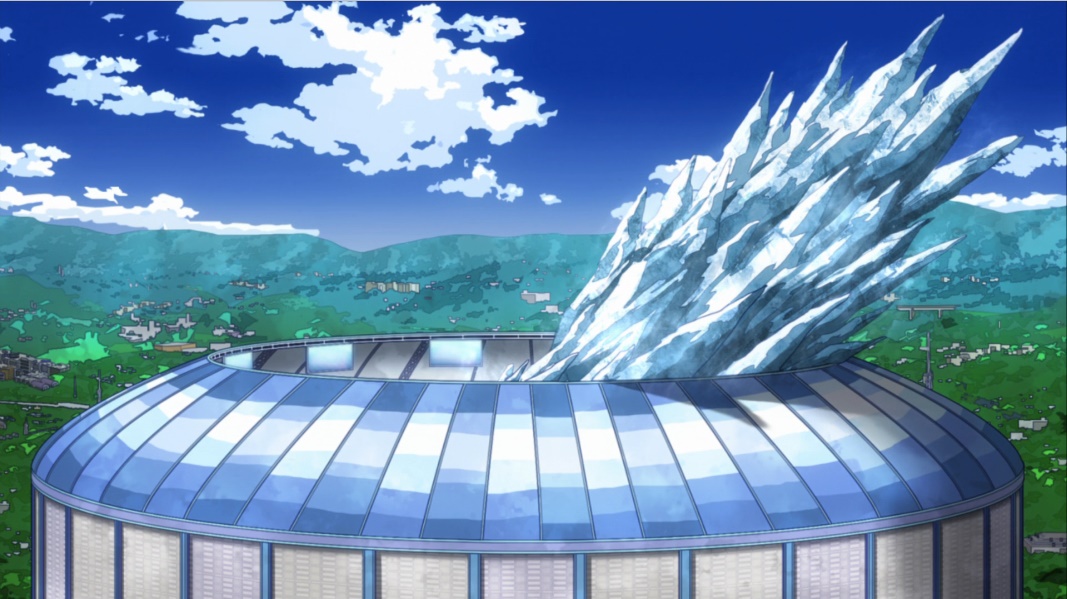 And so another fated battle between men is set up, as Todoroki and Izuku will face each other whenever the show reaches the second round. Todoroki has shown just how overwhelming his ice can be, and there’s always the possibility that he’ll be panicked into using his fire as well. Recently, Izuku has developed far greater control over his Quirk, but it’s still a limited and shaky control. How will a competition between the successors to the top two professional Heroes shake out?

Next Week! A bunch of the other kids will fight. It looks like they’ll speed through a lot of match-ups before ending on some setup for Uraraka’s terrifying bout versus Bakugo.