Uneven competitions are a staple of action anime. If you’ve ever seen a Rocky movie, you’ll get the gist of the typical shonen protagonist’s arc. What delights me more than anything else about the growth two of My Hero Academia‘s protagonists — Ochaco Uraraka (Ayane Sakura) and Izuku Midoriya (Daiki Yamashita) — is the echoes of fiction’s greatest character: Joseph Joestar. I once wrote a primer on Jojo’s Bizarre Adventure, but it hardly reveals the majesty of Joseph Joestar, the ultimate Jojo. Unlike the Jojos that came before and after, and even unlike Rocky, Joseph’s success didn’t hinge on his ability to give or take a beating. If he won a fight, it was because he cooked up some hair-brained scheme (sometimes even using hair as a weapon) on the spot, taking his opponent by surprise with wit and ingenuity.

It is in this clever mold that Izuku and Uraraka appear to be forming. When Izuku stood at a disadvantage against the other students working their way through the Sports Festival’s minefield, he dug up a pile of mines and blasted himself to an unlikely victory. Now, Uraraka faces off against a challenger — Katsuki Bakugo (Nobuhiko Okamoto) — known for his brutality and immense physical prowess. Few people, Uraraka included, could hope to match him in kind. Gazing down on Bakugo’s crooked grimace, the audience is definitely not on his side; unlike the odds. 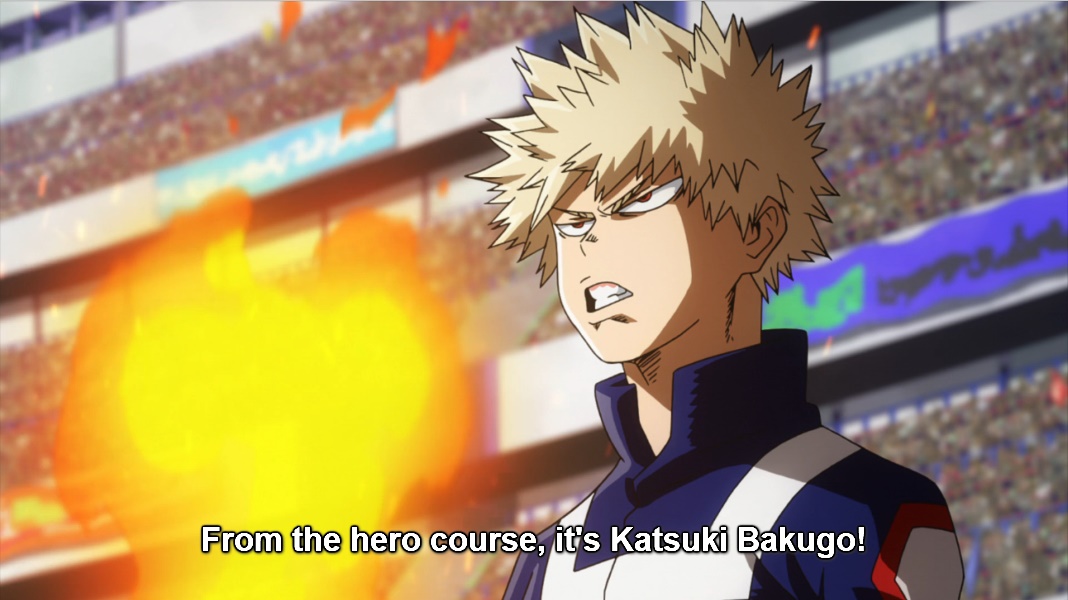 What is this face?

Before the fight, Izuku offered his notes to Uraraka, thinking he’d come up with a rough plan for fighting Bakugo. Like Izuku, I had some thoughts about how this could play out and, unsurprisingly, we were both wrong. The obvious play would be for Uraraka to dodge Bakugo’s opening attack, and to lay a hand on him, activating her Quirk and sending him floating out of bounds. The obviousness is at least half of the problem, there. Bakugo sees through the ploy, immediately, and blocks Uraraka’s charge by blasting the ground at her feet. Even if she had made contact, what’s to stop him from controlling his own direction and momentum with explosions, something he’s already proven capable of doing?

Undeterred, Uraraka continues her assault. She charges in again and again, always getting stopped or blown back by Bakugo’s explosions. From within the smoke cloud, something blew lunges toward Bakugo. He pins it, blasting it into the pavement before realizing it’s just Uraraka’s jacket. From behind, she leaps in with another attempt, but even this can’t slip past Bakugo’s impossible reflexes. He counters with another explosion, and it starts to seem like Uraraka will never find an opening. The audience is done. 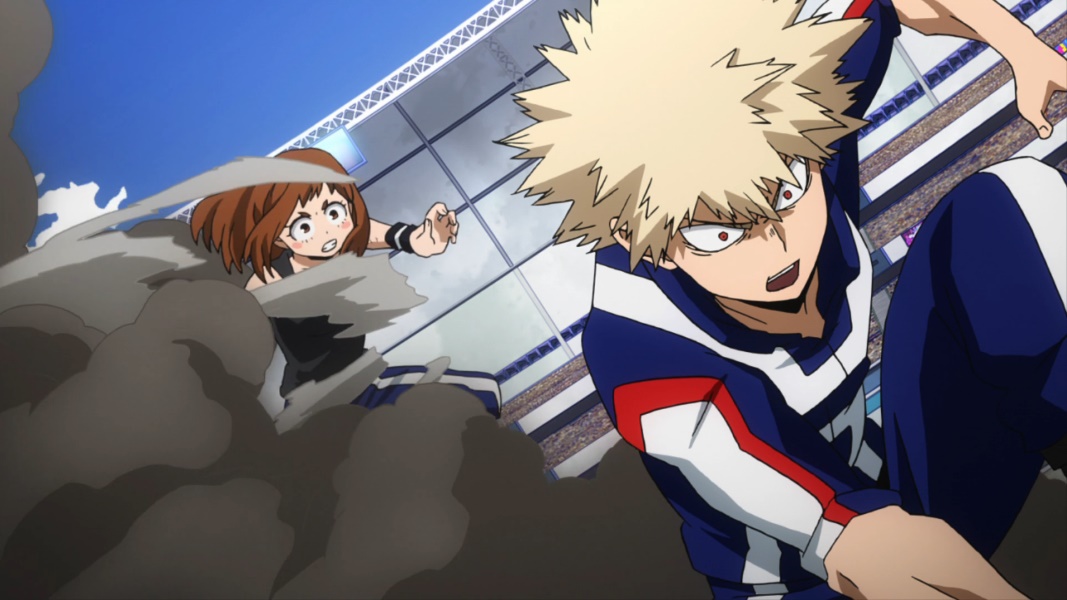 One after another, viewers start shouting down to the combatants, castigating Bakugo for letting the fight last this long. It seems so one sided, so why is this evil boy toying with her? If she can’t land a single hit, why doesn’t he just end it immediately? From the announcers’ booth, Eraserhead (Junichi Suwabe) quiets the unseeing doubters. With his perpetually dry eyes, he sees that Bakugo hasn’t won instantly because he is more respectful of Uraraka’s capabilities than the people cheering for her. That evil boy is actually judging his opponent to be a valid threat, and his ambition won’t allow him to take her lightly.

Just like Joseph Joestar and Rocky before her, Uraraka is not to be taken lightly. What will be taken lightly is anything she touches with her Quirk, Zero Gravity. While Bakugo and the audience were focused on this girl brashly charging into a beating, the more observant onlooker caught on to the reality: something clever and awesome is going on. Each time Uraraka charges at Bakugo, she stays low to the ground, forcing him to direct his explosions downward, blasting loose chunks of cement. From within the ensuing clouds of smoke and dust, she grabs the concrete clods and uses her Quirk to send them floating skyward.

Finally, everyone notices the whirling cement gyre floating above the stadium. Uraraka releases her quirk, sending the rocks plummeting toward her and Bakugo’s heads as she breaks into a final charge. This time, he would have no way to evade. Surely, between dealing with her and dealing with this rain of rocks, he would leave an opening. And in that opening, Uraraka wouldn’t just lay a hand on him; she’d hit him with anime’s greatest gift: the secret technique. 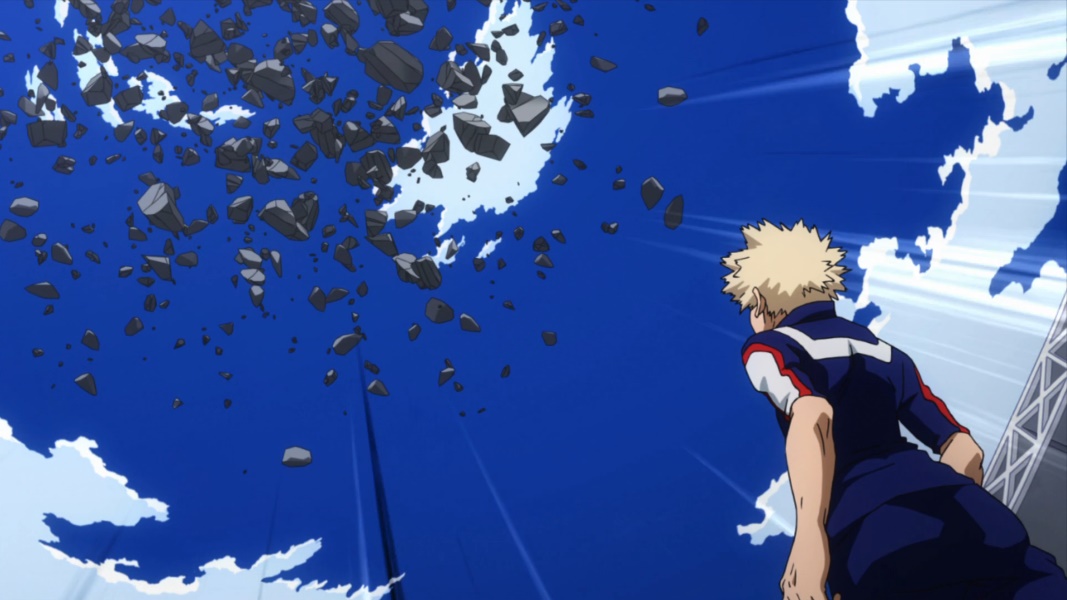 For as much as Uraraka knew about Bakugo’s fighting style going in, he managed to glean some stuff from her as well. Most importantly, he knows she’s close to Izuku, and therefore must be a trickster just like him. Though he didn’t see this gambit coming, it hardly matters. Bakugo has a secret technique of his own. Gripping his left wrist, he aims it skyward and digs his fingers in. With a sickening crack, he forces the explosions from his right hand into his own left wrist and an enormous conical explosion blasts from his palm, shattering and scattering all of the falling debris in an instant.

The blast wave sends Uraraka tumbling, and that’s that. As she strains past the physical limits of her body, eyes going unfocused and dull, she thinks about her promise to her parents — to become a great enough hero to save them from financial hardship. Midnight steps into the ring and, seeing that Uraraka can’t get back to her feet, declares Bakugo the winner.

In the stadium hallways, Bakugo and Izuku cross paths. Immediately, Bakugo accuses Izuku of cooking up Uraraka’s wild scheme. He’s obviously uncomfortable with having faced such an unexpected challenge, and is looking to place that burden on familiar shoulders. Standing firm, Izuku dashes that misconception. Uraraka came up with that plan, and wouldn’t be any better off had she taken Izuku’s meager advice. In the end, Uraraka deserves Bakugo’s respect, but both she and Izuku are left wondering if they could ever match Bakugo.

When Izuku enters the locker room to prepare for his match against Todoroki (Yuki Kaji), he find Uraraka sitting there, apparently fully recovered. She says her injuries weren’t severe, so Recovery Girl (Etsuko Kozakura) was able to fix the worst of it immediately. Though she tries to keep her demeanor optimistic and bubbly, she’s masking her frustration. She calls her dad and, though he doesn’t understand the ins and outs of Hero battling, he’s supremely supportive. His financial troubles were never his daughter’s problem to solve. 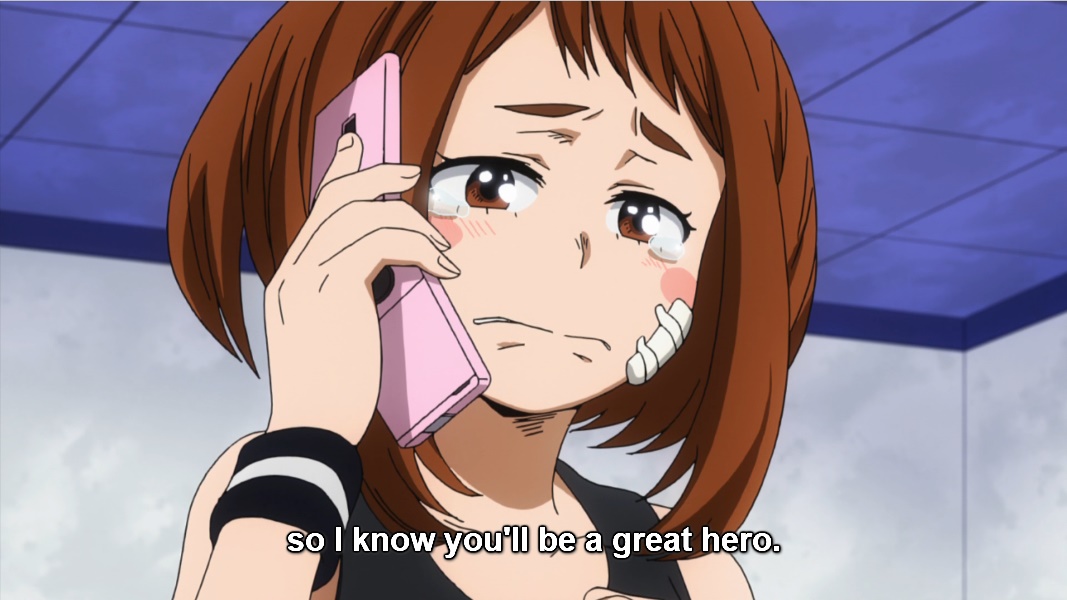 Back in the hallway, Izuku almost bumps into Endeavor (Tetsu Inada). The #2 ranked Hero had been looking for the boy, hoping to ask about his Quirk. The menace here is palpable, given Endeavor’s personal ambition, ambitions for his children, and seething hatred of All Might. All Endeavor has seen of Izuku’s Quirk was the brief, nearly imperceptible moment when Izuku flicked a gust of wind at the ground to knock himself out of Shinso’s hypnosis. Somehow, Endeavor watched that single second of Quirk use and judged Izuku as “comparable to All Might.” 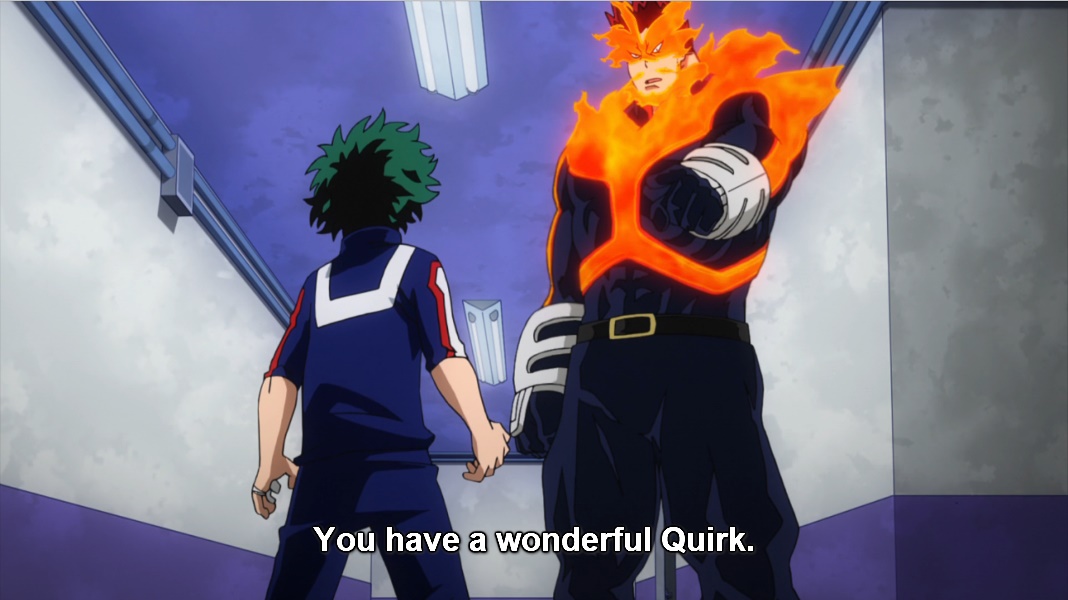 Endeavor explains that his son was created to surpass All Might, and as such would have to surpass Izuku, with the dual implications that Todoroki would win against Izuku, and that beating Izuku is akin to beating All Might. Izuku is shaken by the possibility that Endeavor figured out his and All Might’s shared secret, but sets that concern aside pretty easily. Leaving the conversation, he turns back to defend himself and his classmate — his friend — Todoroki. They aren’t their mentors, or their parents, and their ambitions are their own.

Next week! Finally, Todoroki and Izuku face off in the first fight of the second round of the UA Sports Festival’s fighting tournament! Even though Izuku’s shown some measure of newfound control over his Quirk, recently, the preview suggests he’ll be going all out and, in the process, breaking every finger he’s got. The hot blooded passion of youth! I can’t wait!