I want to know more about Katsuki Bakugo (Nobuhiko Okamoto). Throughout the series, we’ve been given glimpses at something deeper smoldering under his superficially raging surface, though his peers are comfortable taking him at face value. Back during the indoor bomb-extraction exam, when Bakugo and Iida (Kaito Ishikawa) were bested by Izuku (Daiki Yamashita) and Uraraka (Ayane Sakura), we got a brief glimpse through the cracks in Katsuki’s masculine facade. The cracks had shown earlier — in flashbacks to his childhood interactions with Izuku, and when he was almost subsumed by the sludge villain — but this was our first look at what might lie beneath. 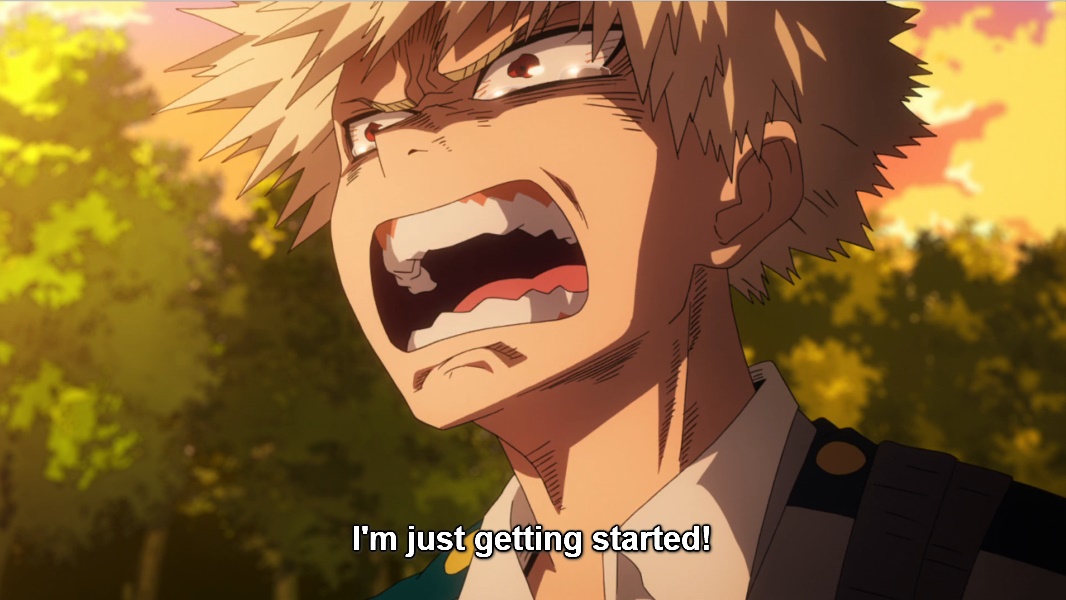 Our clearest look under Bakugo’s shell.

What appeared to be boundless, almost sociopathic self confidence looks more and more like a mask for deep insecurities. From the moment his Quirk manifested, Bakugo has been certain of his own self sufficience and of the grandness of his destiny. Izuku’s continued efforts to help him and compete with him cast some doubt on those inalienable truths, but it was Shoto Todoroki’s (Yuki Kaji) effortless, overwhelming power that shook Bakugo’s certitude. Once he left the small pond of middle school, he was shocked at the size of the other fish.

When faced with such insurmountable obstacles, the bullheaded will decide that the only way out is through, and no one is more bullheaded than Bakugo (until a character with a literal bull head is inevitably introduced). And yet, leading up to his ultimate battle, Katsuki has shown a remarkable level of thoughtfulness and introspection. Whenever attention shifts his way, the mask of manly fury slips on to meet it. When the gaze lifts and he can murmur to himself, he offers thoughtful analysis of the nature and limitations of Quirks.

If Katsuki Bakugo has his way, his final fight with Shoto Todoroki will be won or lost based on those physical limitations. Having already witnessed Izuku, his lifelong rival, pushing Todoroki to use the full breadth of his ability, Bakugo will settle for nothing less. Whatever billows are stoking the flames of Katsuki’s passion will remain a mystery, for now. His drive for validation — to push himself and his opponent to their limits — cannot be satisfied by Todoroki. For Todoroki, going all out against Izuku felt like a moment of liberation. 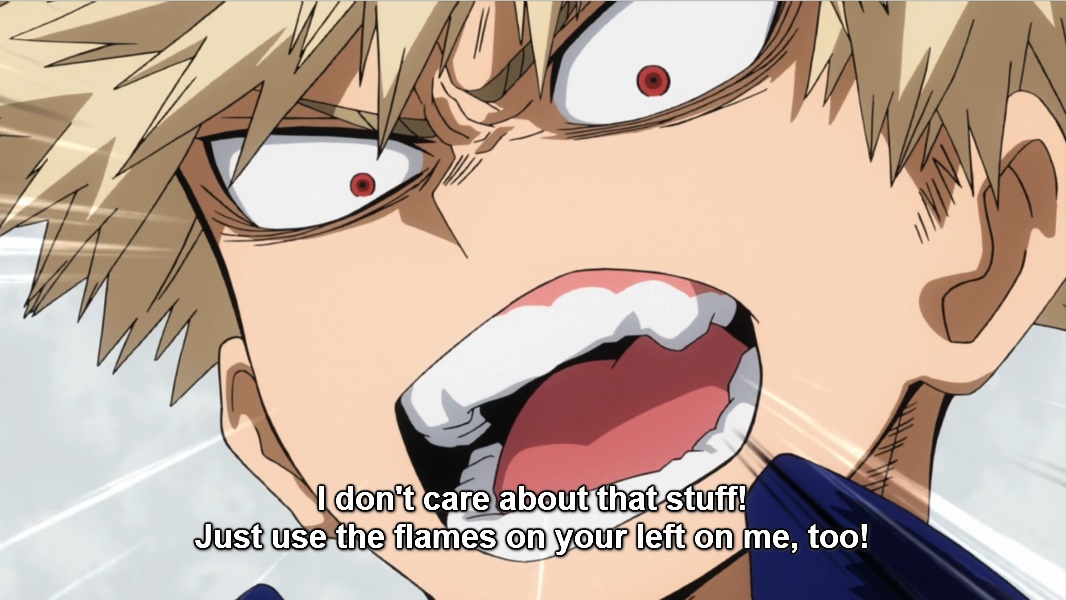 Finally, he was able to use the Quirk inherited from his father without the weight of that man’s desires and expectations. That respite proved to be brief. After the emotional high of the fight, Todoroki was left to reconcile with the nature of his victory, his relationship with his father, and his desires for the future. Even if he claims his father’s Quirk as his own, Endeavor (Tetsu Inada) will still feel satisfaction for having created him. Todoroki may also fear that his mother’s fears had some merit, and further reliance on his flames may indeed warp him into a man similar to Endeavor.

Basically, he’s too lost in his inner turmoil to invest himself in this fight the way Bakugo has, and Bakugo knows it. Todoroki starts the fight by trying to seal Katsuki within a glacier, but a series of explosions are enough for the boy to tunnel his way through the ice. Bakugo closes ground, knowing that Todoroki’s ice is too slow for close range combat, hoping to force the flames from his opponent’s left side. He fails. The hotter Bakugo’s desire for an earnest knock-down-drag-out burns, the further Todoroki drifts into introspection. 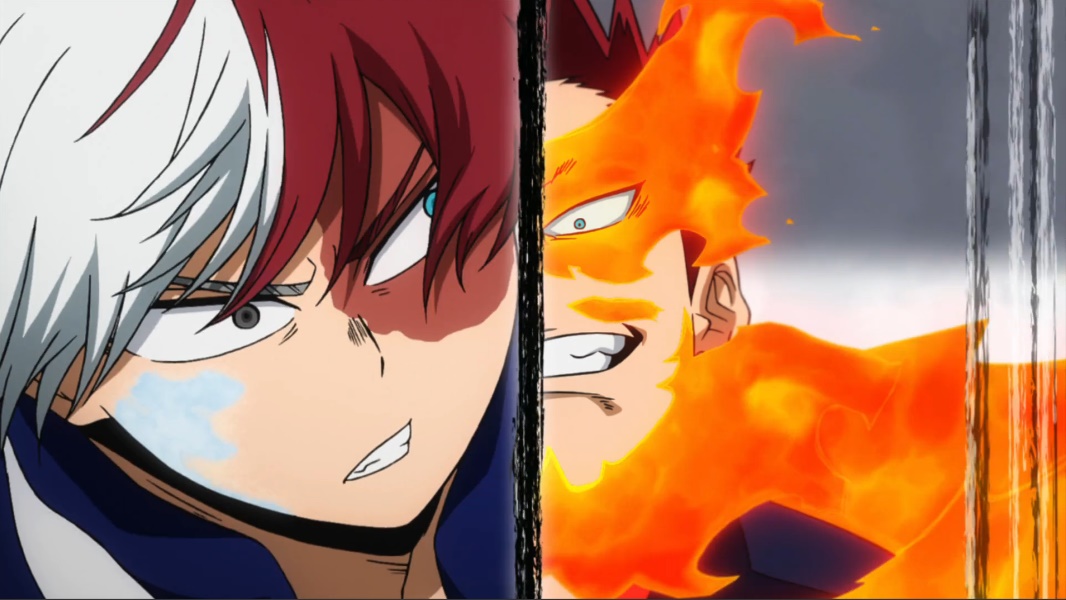 The sinister left side.

Finally, whirling through the air like a human cyclone, Bakugo unloads his ultimate attack: an explosion that sends the distracted Todoroki sailing out of bounds. The student literally bred to be the greatest hero lies unconscious on a pile of his own ice while Bakugo screams in dissatisfaction. Midnight knocks him unconscious to end the fight, and Bakugo has to be restrained in chains on the winner’s podium during the medal ceremony, so great is his anger at having been cheated out of a passionate battle; the battle Izuku got, and he didn’t. 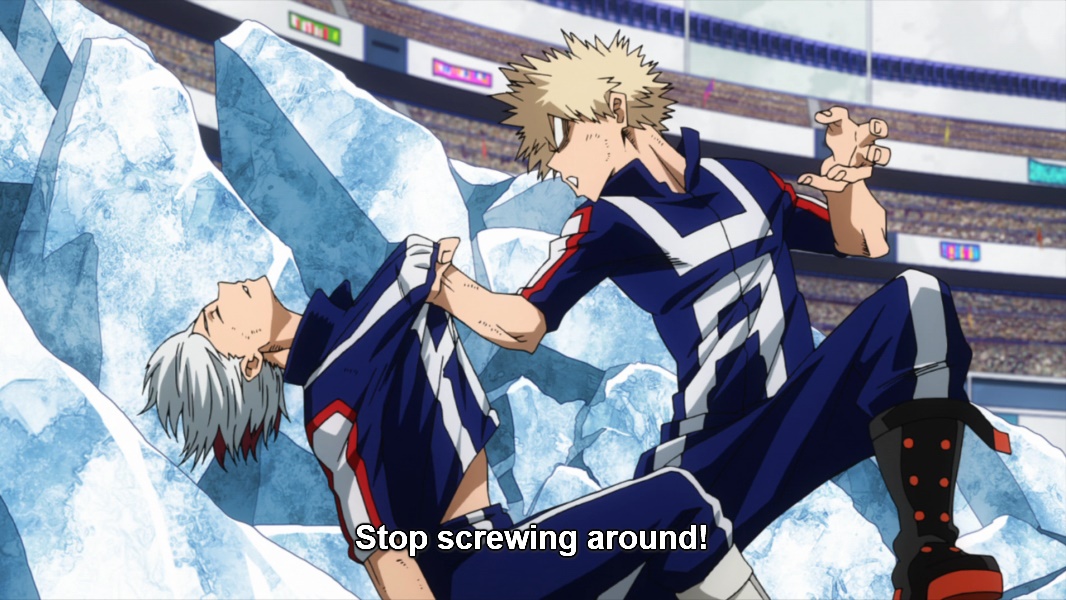 Absent from the 3rd Place podium is Tenya Iida. While the tournament wrapped up, he hopped a train to his hometown, rushing to the hospital to meet his family. There, his brother — his idol and inspiration — Ingenium (Masamichi Kitada) lies gravely injured and heavily bandaged. Someone out there is trying to kill Heroes, and the man Iida looks up to above all was completely overpowered.

With some time off from school after the tournament, Todoroki also makes a trip to a hospital, though with less urgency and less grave portent. Still stewing on his inner conflict, Shoto goes to visit his mother (Michiko Neya). He wants to soothe the wounds of his past and, ultimately, to get her out of that hospital. 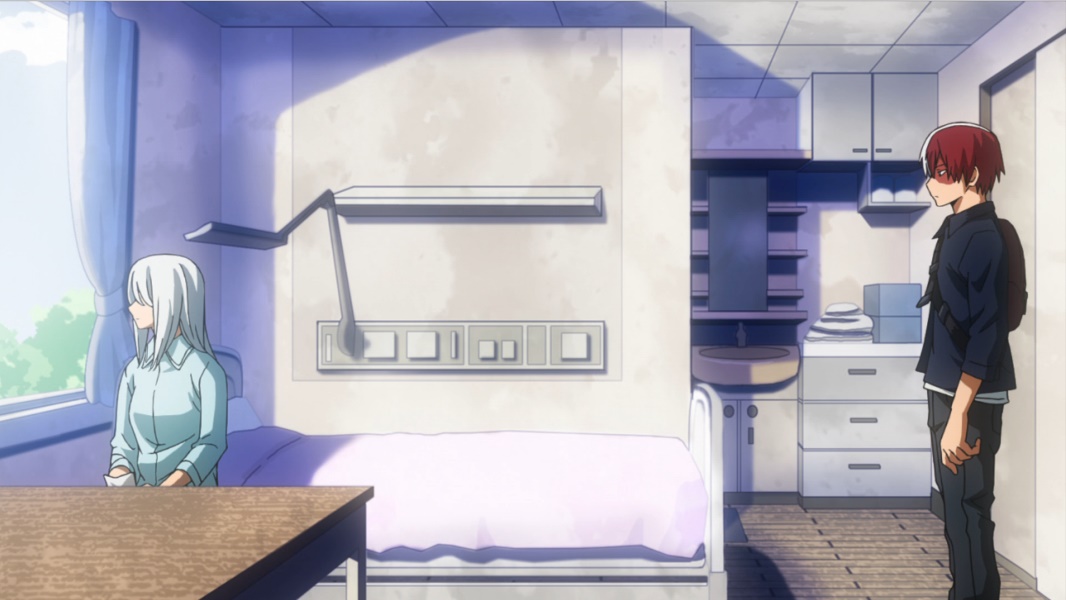