MY HERO ACADEMIA Recap: (S02E13) Time to Pick Some Names

My Hero Academia‘s Sports Festival is over and the students are back from their brief recovery break. On the train, one after another, people start to recognize Izuku (Daiki Yamashita). They murmur about the the determination he showed in the tournament before cheering him on in unison. He sheepishly accepts their praise, then arrives at school to hear of similar experiences had by his classmates. Even if they’re still in high school, being on TV has given them a glimpse of what a professional Hero’s life is like. 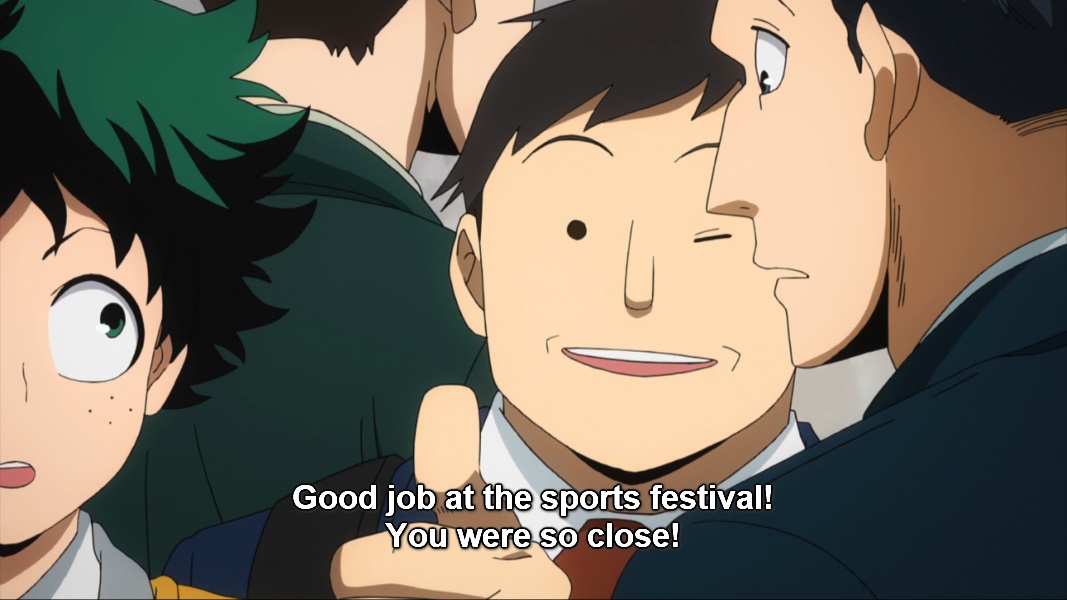 As their homeroom class starts, they’re shocked and delighted to see Shota Aizawa’s (Junichi Suwabe) return to the teacher’s podium. He’s completely healed his injuries he suffered while fighting Nomu all those weeks ago. Though recovered, he’ll always bear scars from that brutal battle. But, now isn’t the time for such dour things. With class reconvened, it’s time for the kids to prepare for the next leg of their training: internships!

Having shown the pros their abilities, a handful of students have already received offers to join professional Hero agencies. The most sought after teens are Shoto Todoroki (Yuki Kaji) and Katsuki Bakugo (Nobuhiko Okamoto) (in that order). A handful of other students receive offers too, proving that winning was not the only way to show value to a professional agency. Regardless of his repeated successes, Izuku presented himself as severely self destructive and received no offers. In spite of losing decisively, Hanta Sero (Kiyotaka Furushima), Momo Yaoyorozu (Marina Inoue) and Denki Kaminari (Tasuku Hatanaka) piqued the interest of recruiters. Though they didn’t win, Tenya Iida (Kaito Ishikawa), Eijiro Kirishima (Toshiki Masuda) and Ochaco Uraraka (Ayane Sakura) showed the right combination of guts and brains to attract offers.

Who wants to become a professional Hero without a cool Hero name? Well, a couple people, but we’ll get to that. Students choosing their code names before setting off into the world is the focus of this episode. And while that doesn’t leave a lot of space for character or plot progression, it’s a fun extended peak into the personalities of many peripheral characters. Aizawa informs the class that their name might not be permanent should they go pro. But there’s always the potential for it to stick, so they need to pick carefully. A flashback reveals that he did no such thing, having received the name “Eraser Head” on a whim from his classmate Present Mic. So, someone with more taste and interest in naming conventions will have to assist.

Nemuri Kayama (Akeno Watanabe), “R Rated Hero” Midnight, joins the class to offer her branding expertise. Things get off to a rocky start as Yuga Aoyama (Kosuke Kuwano) steps up to present his code name: “I can not stop twinkling.” It seems barely related to his naval-laser Quirk, is a sentence, and is in English, and none of this sits well with class. Midnight edits it down to “Can’t Stop Twinkling,” but that doesn’t do much to reset expectations for what makes a name suitable. Everyone’s stressing about whether or not their names need to be funny and weird until Tsuyu Asui (Aoi Yuki) takes the podium.

When Tsu reveals her chosen name, “Froppy,” and Midnight accepts it, the entire class chants it in elation, relieved to see a nice cute name set the standard. The names start coming fast and furious, with some standing out more than others. Kirishima takes the name “Red Riot” in homage to a professional hero after whom he’s modeling his Hero career, “Crimson Riot.” Then, there are some bumps in the road. 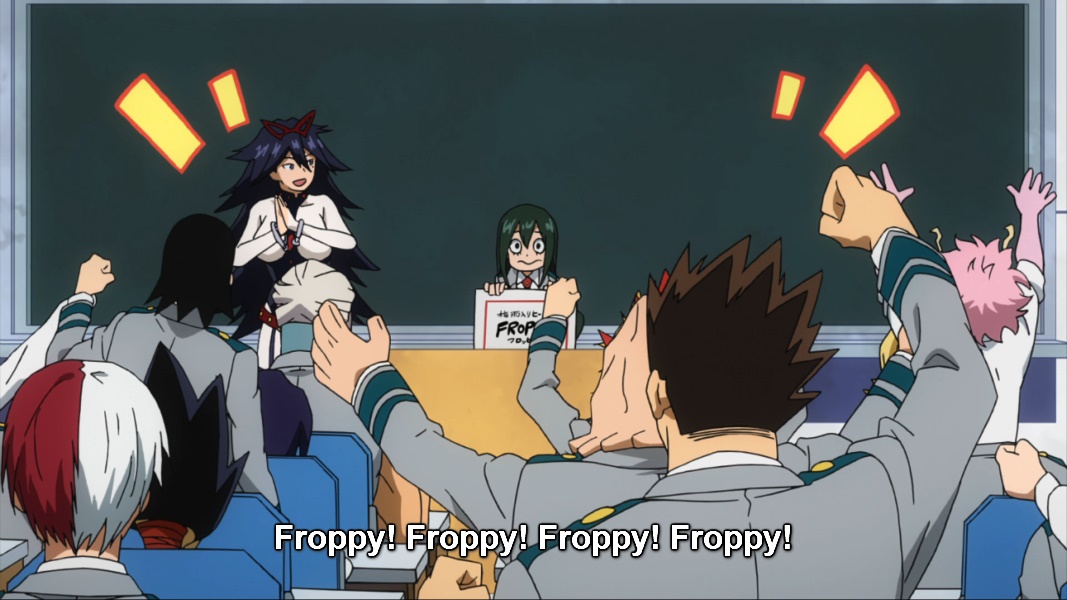 While everyone else is cooking up cool identities, Izuku recalls his lifelong admiration for and mimicry of All Might. Now that he’s actually All Might’s successor, he doesn’t feel worthy of biting on that style. He isn’t alone in this dilemma, either. Todoroki heads to the podium to reveal his Hero identity as… “Shoto.” Since he’s the hottest cold thing on the block, nobody argues with his lack of flare. When Iida heads to the front of the class and does the same thing – choosing the code name “Tenya” – we’re given a bit more insight into his lack of branding.

At the hospital, his gravely injured brother Tensei (Masamichi Kitada) revealed the extent of the damage done by the Hero killer, Stain. Though speed had once been his ally as the Hero Ingenium, he’s now paralyzed from the waist down. In a tragic, yet classic, Hero move, he passes the mantle of Ingenium on to his younger brother. The weight of that name, however, is too much for young Tenya to bare. He’s still in high school, and isn’t even at the top of his class, so how could he inherit his brother’s legacy, now? He’ll have to prove himself, first.

Showing some conviction, Izuku Midoriya heads to the podium to declare his code name. In jagged writing that reveals the extent to which his hands are still injured, he presents his class with his Hero name: “Deku.” Everyone’s shocked, knowing this “nickname” is more of an insult meaning “useless,” bestowed upon him years ago by Bakugo. Asserting his choice, Izuku explains that a friend of his (Uraraka) changed the meaning of that name for him, and now it reflects his desire to do his best. And that just leaves the matter of Bakugo’s code name.

Katsuki Bakugo has made multiple trips to the podium, each time revealing an edgier name than the last, always based around themes of “explosive” and “murderer.” As with every single thing about Bakugo, everyone agrees his choices aren’t particularly heroic. For now, he’s in the normal name club with those other two boys. One of those normal name boys is setting off on a dangerous path. 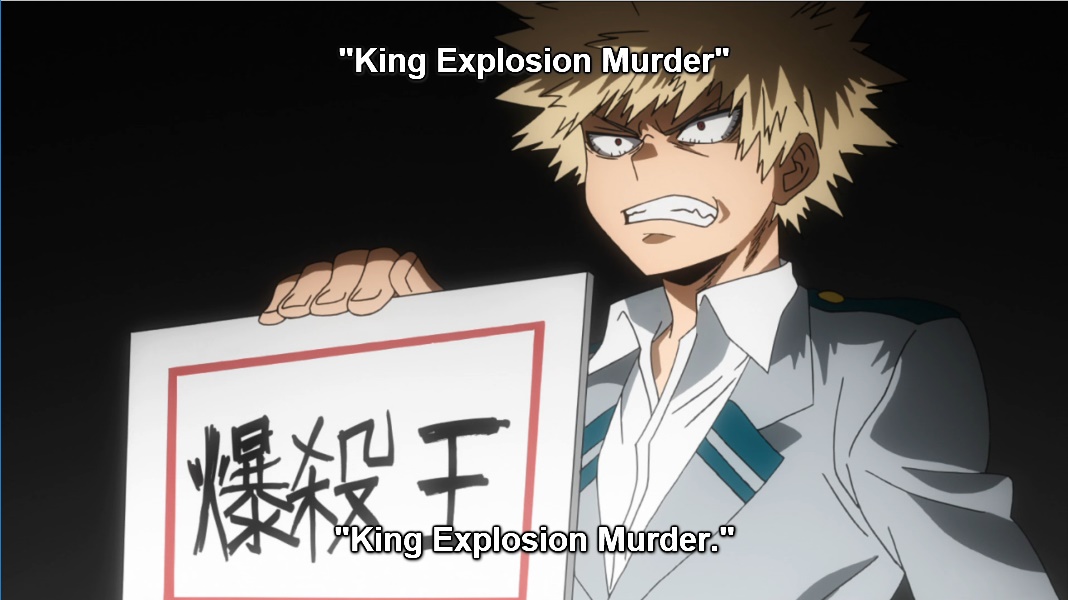 Izuku’s a bit surprised when Uraraka reveals she’ll be joining Gunhead’s Hero agency. Having experienced serious combat versus Bakugo, she wants to strengthen her skills and broaden her horizons, even if she ultimately wants to work as a support Hero. The true suspicion falls on Iida’s internship choice. He’s been acting conspicuously collected since he returned from the hospital, and now he’s signed on as an intern at an agency in the city where Stain attacked his brother. Just as class lets out, All Might rushes to meet Izuku with shocking news.

Pulling his protege aside, All Might – literally shivering with nerves – explains that an offer from a Hero agency came in for Izuku. The late arrival is surprising enough, but what has All Might shaking is the name of the Hero: Gran Torino (Kenichi Ogata). Though unfamiliar to Izuku, this is the Hero who taught All Might’s homeroom at UA. He already knows the circumstances of All Might and Izuku’s shared Quirk, and this seems like a golden opportunity for Izuku to get his sh*t under control. And yet… what kind of man is Gran Torino to make All Might quake like this?

With their costumes packed, everyone says their farewells at the train station before heading off in every direction to start their internships. Izuku and Uraraka stop Iida to bid him farewell. Everyone seems to understand that he’s making an incredibly dangerous play at vengeance, but nobody does anything to stop him. Izuku tells him not to do anything desperate; to come to his friends if he needs help, but it’s obviously too little too late. 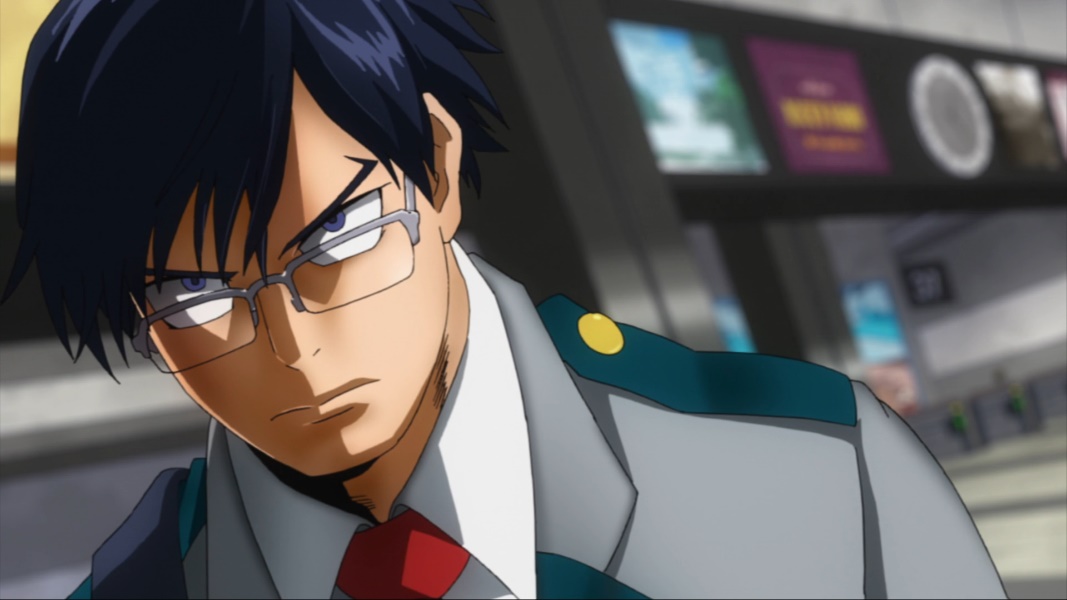 After the credits, Izuku makes his way to the office of his destined internship. What lies before him is a decayed building, dwarfed by its neighbors. Inside, a small old man lies dead, disemboweled on the ground. Psyche! He’s not dead. It’s a weird gag. This is Gran Torino, and now the man who trained All Might will hopefully hone the wild potential of Deku. 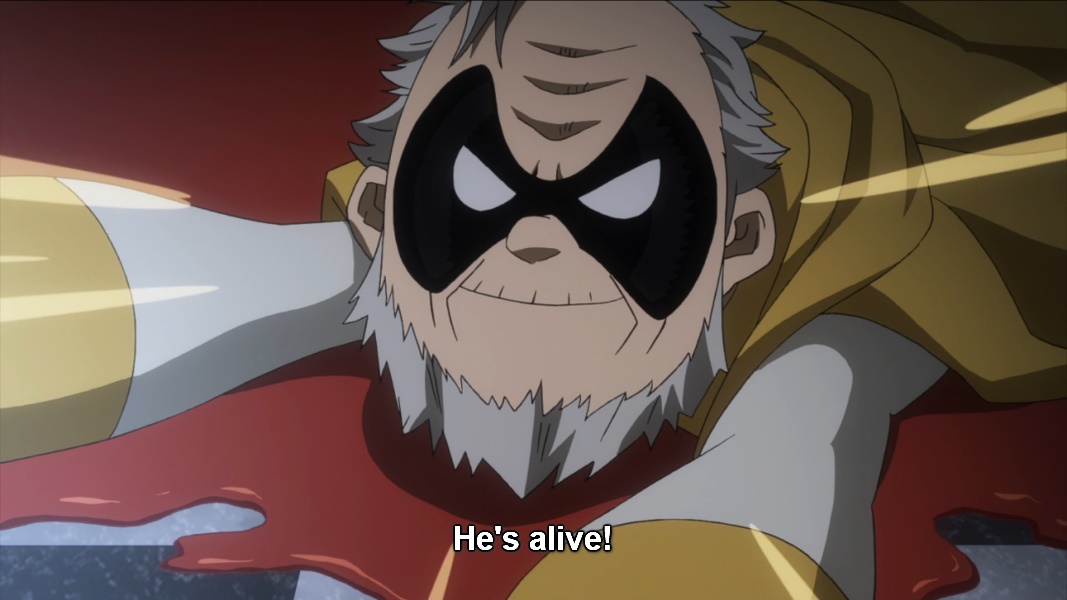 Next week! It looks like Uraraka will begin her internship with Gunhead, and Bakugo will be taken under the wing of the denim clad hero Best Jeanist, while Iida wanders the streets looking for a fight he can’t possibly win.