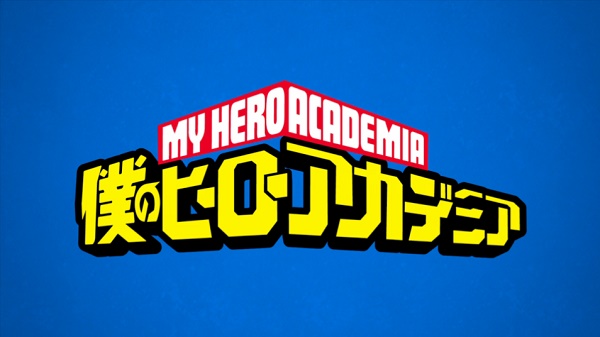 A new intro, a new season, and a lot of retreading of the premise. People have powers. Kids go to schools to master those powers. UA is the best school, and as such was attacked by villains. All Might rules. Beyond re-establishing past conflicts and existing dynamics, the season starter also sets up the focus for the weeks to come. An old man reads an expository letter, written and voiced by All Might, laying out all the details before finally revealing the Symbol of Peace’s real name: Toshinori Yagi. Beyond laying out the details, the letter sets up the possibility for this man– All Might’s mentor– to help in training Izuku.

Back at the newly reopened UA High, Shouta Aizawa starts class with an explanation of what comes next. Wrapped from head to toe in bandages, he’s still recovering from his brutal confrontation with the League of Villains. In spite of recent troubles, the UA staff feel its important to push on with the school’s annual event: The UA Sports Festival. As people with Quirks amassed worldwide, the appeal of the Olympic Games dwindled. In their place, events like the UA Sports Festival sprung up. Though the specifics of the event are still unclear, it will be an opportunity for the students to show their skills to a national audience and (more importantly) to scouts looking to recruit new talent to professional hero agencies. 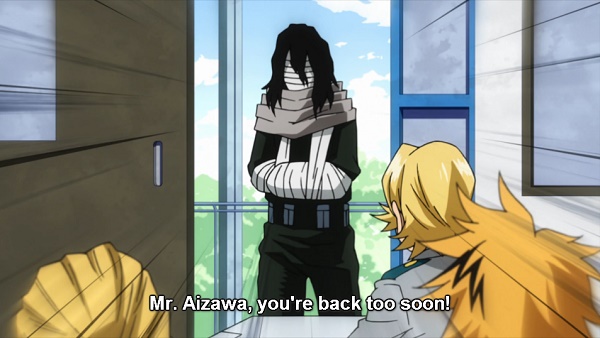 Though the Olympics may have dwindled, this is still an event for the carrying and passing of torches. Most of the students are pumped to prove their worth, but Mineta is as nervous as ever, and the invisible Tooru Hagakure worries that she won’t be noticed at all. Surprisingly, no one is as psyched as Ochaco Uraraka. The usually sweet and carefree girl burns with an intensity that shocks her classmates. On their way to the cafeteria, Izuku asks about her ambitions as a professional hero. 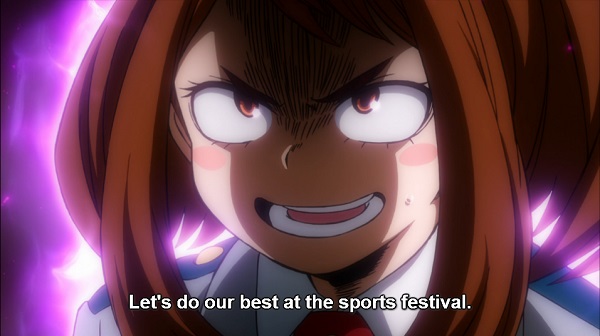 Instead of having the usual desire to be the “best,” or to emulate some other hero’s greatness, she wants to use her Quirk to have an actual career. Her parents own a struggling construction company, and Ochaco believes that her Quirk could ease the company’s need for heavy equipment, but that her father won’t go along with the idea until she’s a certified hero. To her surprise, Izuku and Iida are both really taken with her extremely practical goal. Their conversation is cut short by the arrival of All Might, who calls Izuku away for a private lunch. Everyone– particularly Todoroki– is starting to notice the conspicuous similarities between Izuku and his doting teacher. 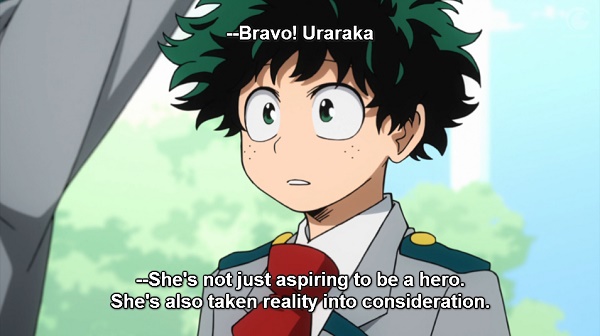 So far, only Ochaco is treating this like a career.

Now, for the torch passing. Over a bento box All Might prepared for his squire, the hero explains their situation heading into the Sports Festival. After the recent battles in which he pushed himself to the brink, the time limit in which All Might can use his Quirk has been cut in half. He now can stay puffed up and ready to punch for about ninety minutes a day. He knows this trend is only going to continue, and it’s only a matter of time before the new All Might has to take his place. The new All Might is, of course, Izuku Midoriya. And what better time to make his mark than at the UA Sports Festival? 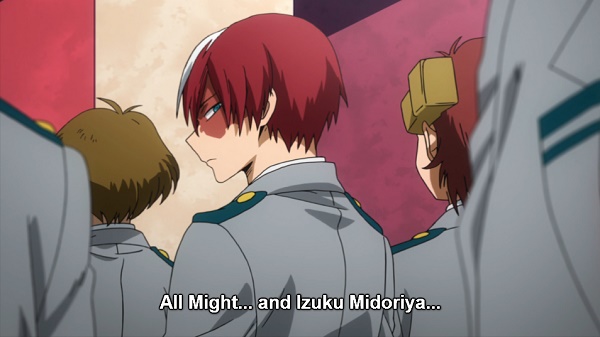 Senpai has noticed you, Izuku.

Izuku is still afraid of shattering himself with his inherited Quirk, All For One, but he recalls the moment when he tried to punch the hand covered leader of the League of Villains and suffered no injury. The only difference between that attempted Smash and all the others that broke his limbs is that it’s the only time he’s tried attacking a person. All Might figures that Izuku subconsciously managed to limit his power, avoiding murdering someone and proving that he does have the capability to use the Quirk without hurting himself. It’s a good start, and an important ability to master as Izuku Midoriya reveals himself to the world as the new Symbol of Peace. 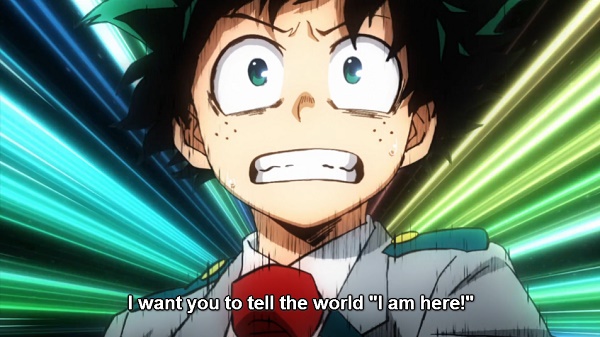 PREVIEW!
The UA Sports Festival begins! That’s pretty much it.