After weeks of mayhem on the mean streets, My Hero Academia returns to the “academia” shtick. The students of Class 1-A return to school, sharing tales and mostly downplaying their adventures as Hero interns. Uraraka (Ayane Sakura) is visibly intense in her newfound devotion to martial arts, but Kyoka (Kei Shindo) and Tsu (Aoi Yuki) demur about their involvement in busting up criminal organizations. Similarly, the trio that took down Stain have to play along with everyone’s belief that Endeavor rescued them and apprehended the Hero Killer.

Even while students praise the #2 Hero, the influence of Stain’s ideology can be felt creeping into UA via the viral video. Denki Kaminari (Tasuku Hatanaka) lets slip that he can’t help but find Stain’s conviction cool. Everyone’s pretty weirded out by this revelation, but Iida steps in to bridge the gap. Newly enlightened, Iida (Kaito Ishikawa) explains that Stain’s conviction is indeed laudable, but his hateful method is undeniably that of a villain. With that smoothed over, it’s back to schoolin’.

All Might (Kenta Miyake) convenes the class in front of an enormous mock-factory and explains their new assignment. The class will be split into groups of five, and each group scattered to five spots on the perimeter of the factory complex. From there, they’ll race to the center to “save” All Might as he fills the role of helpless victim. The goal is to see who can rescue someone from an industrial accident quickest without causing further damage to the facility. Izuku (Daiki Yamashita) is sorted into the first group against Tenya Iida, Mina Ashido (Eri Kitamura), Mashirao Ojiro (Kosuke Miyoshi), and Hanta Sero (Kiyotaka Furushima). As they wait for the race to start, the rest of the class bets on who will win, and while everyone backs a different horse, they all agree it won’t be Izuku.

Things start off about as expected; Sero’s tape-shooting elbows allow him to effortlessly swing around like a knock-off Spider-man. Though still recovering from his fight with Stain, Iida’s speed still shows. Ashido’s super strength and acid gliding grant her impressive mobility. Ojiro’s agility and prehensile tail let him leap around like a combination of the greatest strengths of a monkey, kangaroo, and human. And, to the astonishment of all, Izuku is smoking everyone. Until now, only Iida and Todoroki (Yuki Kaji) had witnessed Deku’s 5% full body control of One For All, and it’s blowing everyone’s minds.

Particularly, Izuku’s movements bare an uncanny resemblance to those of a certain explosive boy that everyone loves to hate. No one sees the resemblance more than Bakugo, and he fumes in classic fashion as he watches Izuku steal his glory, once again. It’s a short lived theft, though. While Izuku has grown immeasurably since everyone saw him last, he still lacks the innate familiarity that other students have with their Quirks. His foot falls wrong on the curved surface of a pipe, and he goes tumbling. While he recovers, Hanta Sero comfortably swings his way to victory. 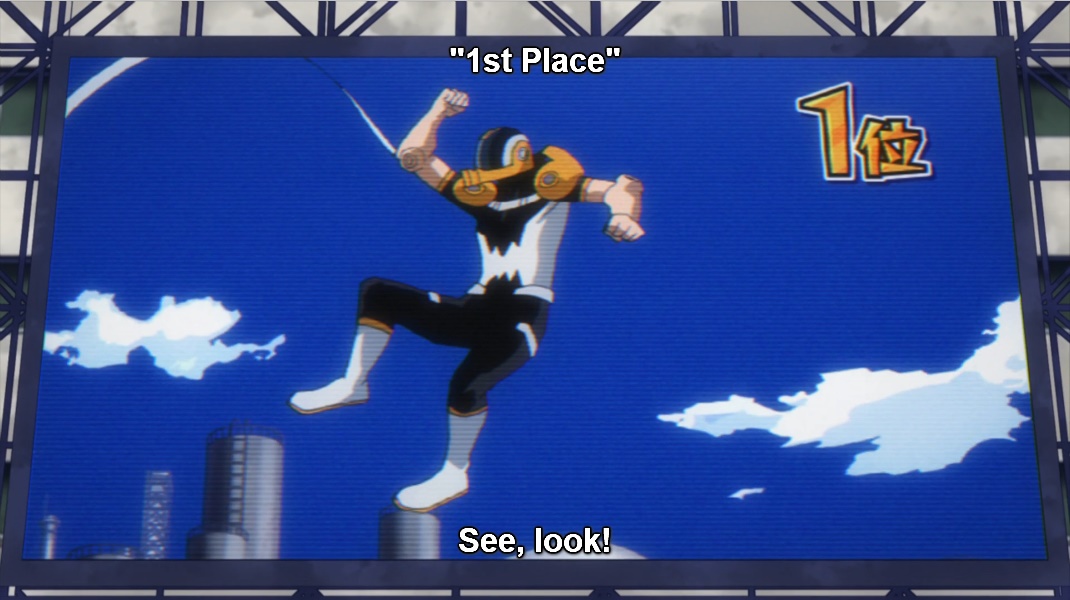 Still, Izuku made a huge impression. His classmates no longer see him as the clever kid who has to destroy his body to use his Quirk. More importantly, All Might witnesses his growth firsthand and asks Izuku to meet with him after class. Cleaning up in the locker room, the horrible grape boy Mineta (Ryo Hirohashi) discovers a hole in the wall to the girls’ locker room. Imploring his classmates to join him in peeping, the awful creature peers through the hole to see nothing but Kyoka’s earphone jack speeding directly into his eyeball. It’s better than the wretched gremlin deserves, and may we never be reminded of his existence again.

In a private room, the deflated form of All Might sits down with Izuku to lay out some Hero History. This is another element that’s weirdly lacking from their actual school work, but compared to the hazy view of history presented in real world schools, it’s understandable. First, All Might sets my mind at ease. Weeks ago, I wondered if the DNA transfer of One For All would apply to Stain consuming Izuku’s blood, or if the show would avoid the topic entirely. Happily, they don’t sidestep the issue, even if it apparently never entered Izuku’s mind. As All Might explains, the transfer of One For All is a consensual act — the Quirk cannot be stolen by force. However, it’s history is tied to another, more malevolent Quirk.

The fog of a flashback whisks us away to the early days of Quirks. In surprising (or not so surprising) contrast to the complex hierarchy of today, the early years of Quirks were a time of social upheaval. Normal systems of governance collapsed as people with strange new powers seized control. One such figure (Akio Otsuka) bore a Quirk that allowed him to dominate the whole of Japan, and his Quirk is called “All For One.” With this Quirk, he is able to remove a person’s Quirk and transfer it to another, even stacking one Quirk upon another. 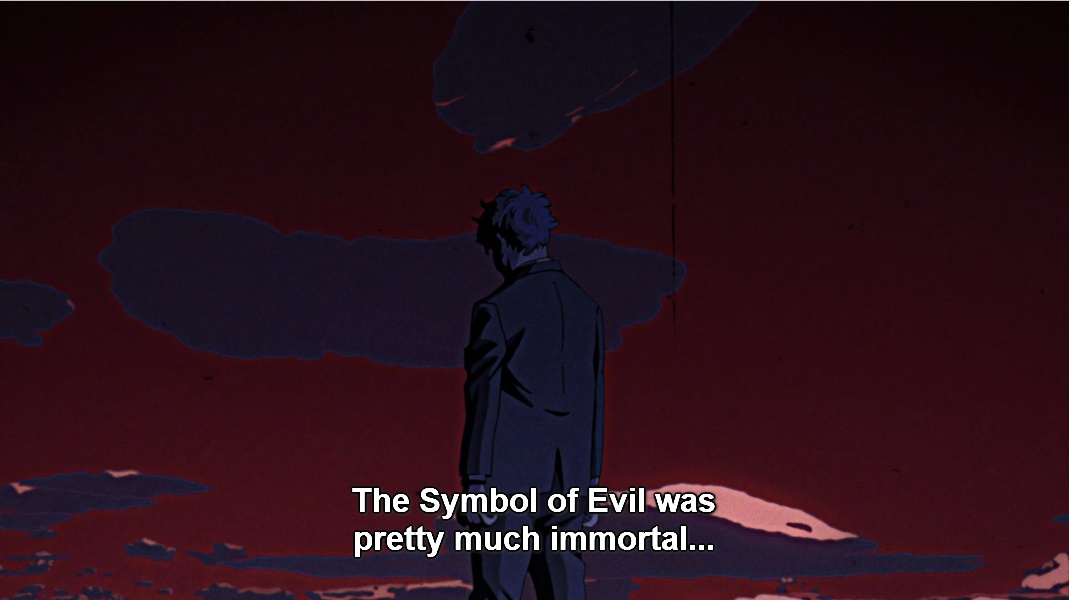 This process can neutralize enemies and empower allies, but it can also force more power upon a person’s body than they can bare, reducing them to mindless creatures — creatures that would later be refined into Nomus. This man, the wielder of All For One, granted his Quirkless brother a unique power generations ago. He gave his brother a Quirk that could build upon its host’s strength, and could then be passed to a new host, accruing more power through the decades. As All For One had granted its user unnatural long life and unparalleled power, the hope is that his brother’s Quirk — One For All — will someday grow strong enough to defeat its brother.

Years ago, All Might believed he had achieved exactly that. In a battle that dealt him a grave injury, he defeated All For One. Only now, his victory appears less certain. The rise of the League of Villains and the repeated appearances of Nomus can mean only one thing: All For One is still alive and kicking, and he’s the shadowy voice directing the League. With all of that laid on the table, All Might has one final detail to share with his disciple.

Before All Might can say more, Izuku eagerly grabs hold of their shared destiny. With All Might by his side, Deku is certain he can face whatever challenges come, but he doesn’t realize it won’t be that simple. Silenced by his fears, All Might thanks his loyal student and they part ways. The final secret All Might fails to share is that he won’t live long enough to see the day when Deku takes his stand against All For One.

Next Week! Oh no! It’s not a preview, but a post-credits sequence! Finals are just around the corner, and if the students pass their test they’ll go on a class camping trip. Everyone’s pretty excited to test their abilities in a new environment, but they’ll be facing summer school if their grades don’t stack up. In a mysterious skyscraper, we get our first real glimpse at All For One. He’s hooked to various complicated medical devices, still ravaged from his fight with All Might years prior. Like his smiling nemesis, he’s grooming a successor in Tomura Shigaraki.

Next Week For Real! Final exams will be here before we know it, and it looks like the first test will be students teaming up in fights against teachers!