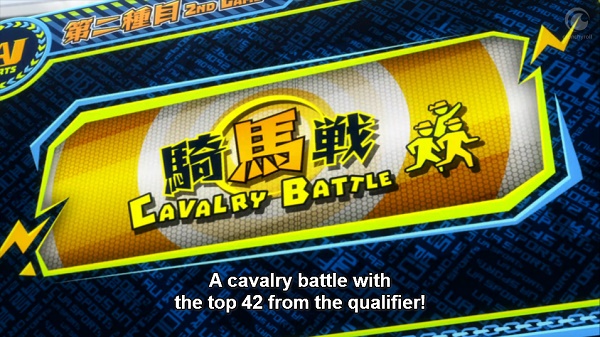 This week, I learned what a “cavalry” battle is. Last week, I assumed it just referred to some specific rule set or team organization. Now, I know that it means using a trio of people to act as the “horse” for a fourth person, the “rider.” Victory is achieved when a rider snatches the headbands off of the opposing riders. In the case of the UA Sports Festival, each rider’s headband bares their team’s total point value. And so, a proper strategy must be formulated to come out with the most points.

A lot of time is dedicated to forming teams. Each team of four people will have to consider how best their Quirks can compliment one another, and how they’ll use those advantages. They could go on the attack, trying to grab as many headbands as possible. They could focus directly on the 10 million point headband wrapped around Izuku Midoriya’s (Daiki Yamashita) head. Or, if they’re the head in that 10 million point band, they could bank it all on defense and evasion. As silly as the “cavalry battle” concept appears, it’s a good test of how well these students can adapt to the capabilities of their allies and adversaries.

Even though Class A already has a lot of experience with heroic teamwork, they aren’t all totally clued in on each other’s Quirks; none more-so than Katsuki Bakugo (Nobuhiko Okamoto). Even after fighting through the entrance exam, watching his class struggle through tests, and fighting back to back with them against the League of Villains, Bakugo has not committed any of them to memory. He’s so committed to becoming #1 that he’ll never register the people numbered 2 and 3. And yet, plenty of people want to ride his reckless ambition. They line up to be his horse. 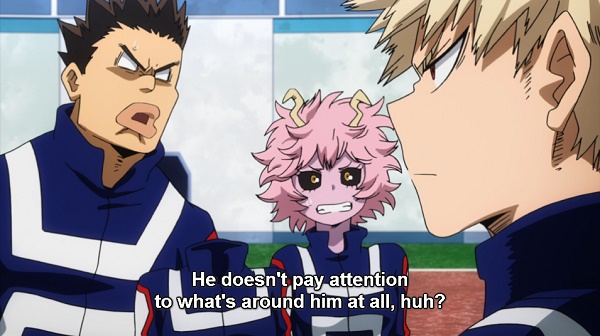 Another gap in preconceptions slips through as Todoroki (Yuki Kaji) forms a team. When Iida (Kaito Ishikawa) assumes Todoroki will use both his fire and ice powers to fight off attackers, Todoroki vows never to use his fire abilities. He won’t give his jerk of a father the satisfaction. Though his teammates may not know the anger burning in his heart, Todoroki seems to have their capabilities pegged. Riding on the shoulders of Momo, Iida and Denki, Todoroki is ready to ride away with Izuku’s 10 million points.

Unlike his peers, Izuku has spent more time studying people’s Quirks than honing his own. His reams of notes extend beyond the most popular heroes to the most obscure, and even to UA students. Even though we’ve seen little from Support student Mei Hatsume (Azu Sakura), and even less from birdboy Fumikage Tokoyami (Yoshimasa Hosoya), Izuku knows how they’ll round out his team with best bud/crush Ochaco Uraraka (Ayane Sakura). 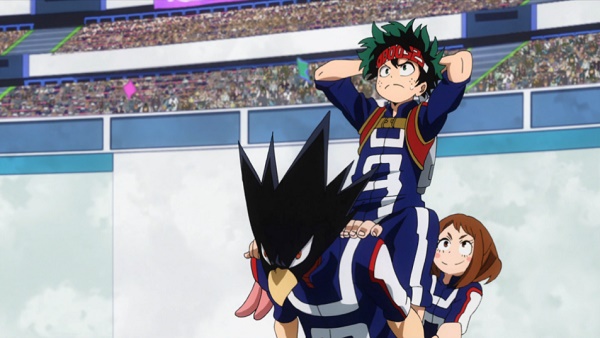 As “R Rated Hero” Midnight signals the start of the battle, practically everyone takes their predictable shots at Izuku. Lightened by Ochaco’s anti-gravity Quirk, boosted by Mei’s jet pack and hover boots, and defended by bird-headed Fumikage, Izuku is able to evade most attacks. Izuku wear’s the jet pack build by Mei and uses it to blast skyward to slip away from danger, but the attacks are too relentless. Ochaco also sports some of Mei’s expertly constructed gear: the hover boots. Between the boots and her Quirk, she can sufficiently pad their landings.

Without the boots, this combination gets a lot shakier. Upon landing, Ochaco’s foot is bound to the ground by one of Mineta’s sticky orbs. Only by destroying the boot is she able to wrench free, compromising their ability to land safely. And yet when cornered, the only way out is up. 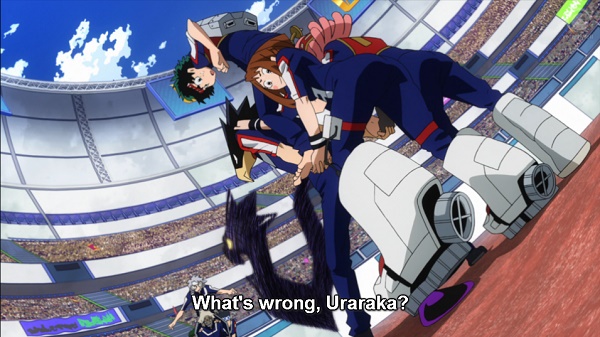 Blasting toward the sky, however, can only save you from so many dangers. A jet pack won’t save Izuku from an airborne attack, and Bakugo seizes on this opening, blasting himself like a ground-to-air missile at his nemesis. The inky, birdlike spectral form of Fumikage’s Quirk, “Dark Shadow,” unfurls in front of Izuku, absorbing a blast from Bakugo’s explosive palm. Falling back to earth, Ochaco lets her team know that landing on one hover boot is not a sustainable tactic.

A sustainable tactic would be something closer to what the students from Class B have been doing. Yet another creepy sinister kid takes a moment to explain his class’ devious machinations; how they used the obstacle course to study Class A’s Quirks, and are now using Izuku as a distraction while they snatch up all the lower point headbands. Before most of Class A knows it, their points are reduced to zero while the clever creep from Class B has ascended to second place.

Dealing with Class B isn’t a priority, now — not with Shoto Todoroki’s team glaring at Izuku. 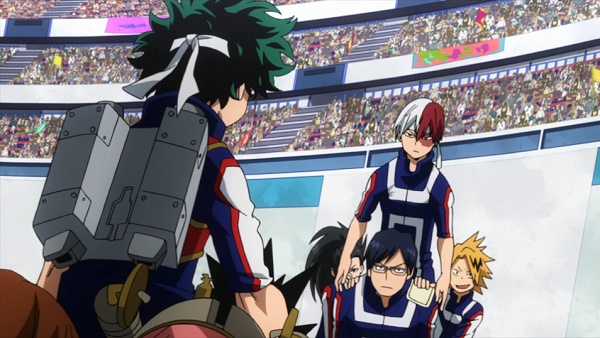 Next Episode! The Cavalry Battle Finale! It looks like Izuku and Todoroki’s teams will indeed be facing off while Bakugo seeks revenge on the creeps from Class B.