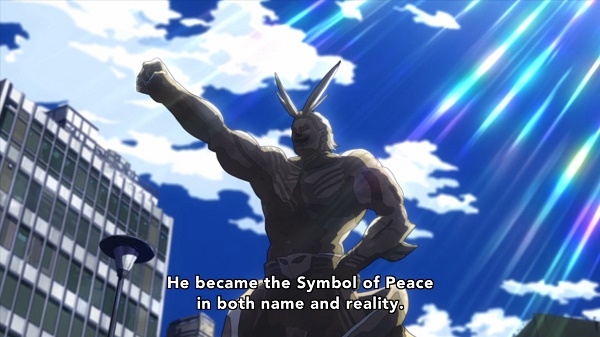 Izuku Midoriya has waited his entire life for someone to affirm his dream of becoming a hero, and here in this alley the person he admires most does exactly that. All Might has assessed Izuku’s potential and deems him worthy of inheriting the power of the greatest hero: One For All. The nature of All Might’s power is apparently a hotly debated and entirely uncertain topic. Everyone assumes it’s some sort of strength enhancement, but no one would guess that it’s transferred from user to user, or that such a thing is even possible. Each bearer of the power nurtures and grows it, adding their own strength for a generation before passing it on to the next deserving candidate. Given that All Might has cultivated a persona as the “Symbol of Peace,” and given One For All’s value, he fears the turmoil that could come from people learning it’s a power that can be granted.

The problem is, All Might isn’t all he used to be. Between the time limit on his power use, and the blood he keeps horking up, the time is coming when someone will need to take his place. Coincidentally, he recently met a boy who’s desperate to take on such a burden, and might just be capable. Izuku accepts All Might’s offer, but going from Quirkless to “Symbol of Peace” isn’t quite that simple. Without proper training, the magnitude of All For One would rend his limbs off. 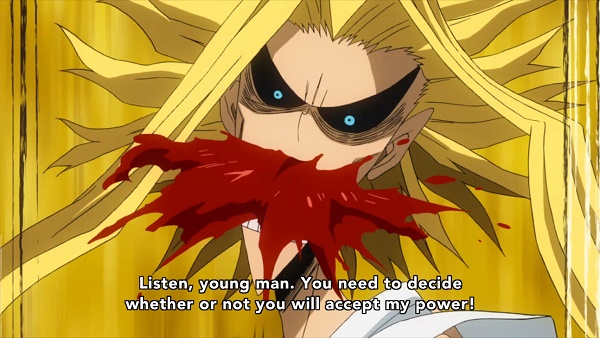 Hoping to avoid any limb rending, All Might creates a training regimen for Izuku that will hone his body over the ten months before his hero academy entrance exam. The setting for this montage will be the local beach. The ocean current tends to deposit trash on the shore, so locals illegally mix in their own junk. Mounds of discarded furniture and appliances line the shore, completely obstructing the view. Clearing that view will be the core of Izuku’s training.

Picking up trash wasn’t exactly how Izuku expected to become a hero. The scope and weight of the job puts him off at first, but All Might crushes a refrigerator like a soda can to teach Izuku that civic service is the most basic tenant of heroism. If he doesn’t take this first step of moving these refrigerators and color TVs, his body will never withstand the generations of accumulated power within All For One. 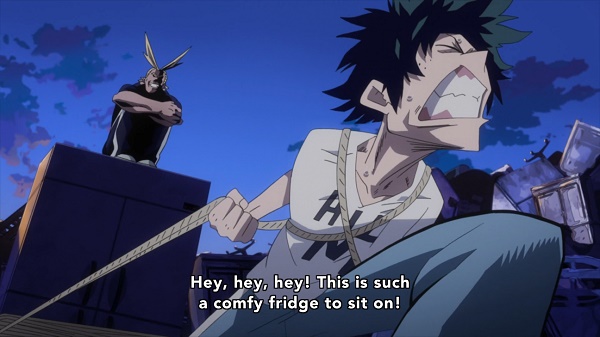 To guide Izuku his physical transformation, All Might formulates the “Aim to Pass: American Dream Plan;” a top to bottom schedule by which Izuku will train. Izuku knows he’s starting at a disadvantage and has limited time, so he’s ready to do whatever it takes. The training music kicks in and the montage finally starts rolling. Struggling and straining on the beach, he starts to understand All Might’s intentions with this challenge. Not only is he improving his town, but disposing of each old tire or or abandoned filing cabinet presents a unique workout. Though All Might’s “Aim to Pass: American Dream Plan” is exhaustive, Izuku suspects it doesn’t go far enough, so he fills in the gap with more focused exercise.

Seven months pass, the trees take on the colors of autumn, and Izuku hauls more trash behind a Segway riding All Might. To the hero’s surprise, his apprentice collapses on the path. His work may be tiring, but the “Aim to Pass: American Dream Plan” was designed to avoid this sort of exhaustion. Unfortunately, it wasn’t designed to be teamed with Izuku’s obsessive need to work harder. His insecurity drives him to push beyond his limits, lest he miss this opportunity to realize his dream. Izuku’s fanboy passion always strikes a chord with All Might, so they reformulate the plan to account for Izuku’s obsessiveness without pushing him back to the brink. 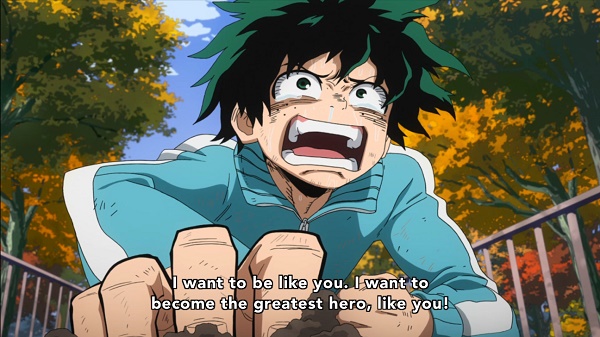 Three months later, as All Might nears the beach he sees Izuku standing atop a mountain of garbage, howling in triumph. On the last day of their 10 month schedule, he’s finally moved all of the trash off the sand. Though a lot of it is just in the parking lot now, it’s still a feat that impresses All Might. With his challenge complete and time running low, All Might rewards Izuku’s hard work. Plucking a strand of hair from his head and presenting it to Izuku, All Might implores, “Eat this.” All For One must be transferred through DNA, and eating a strand of hair seems like the best option.

Hero hair digesting, Izuku heads to U.A. High School for his entrance exam. On his way in, Bakugo offers his patented rage and threats. It takes a moment, but Izuku eventually remembers that he should have powers now, too, and doesn’t need to shrink away from Bakugo anymore. Head held high, he strides toward the door and immediately trips. Luckily, another applicant was close enough to stop his tumble in mid air. The girl gently sets him upright using her Quirk and politely offers some small talk before heading in to the school. Having said nothing, Izuku is stoked as hell to have “talked” to a girl. 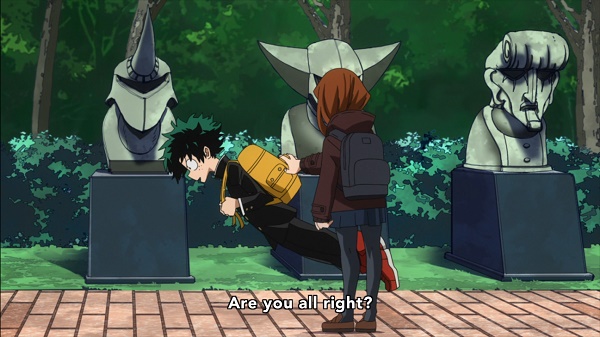 Once everyone has filled the auditorium, the Voice Hero, Present Mic, explains the basics of the entrance exam. Starstruck, Izuku immediately slips in to his endless muttering about the school and all of the professional heroes on staff. Another student, this one seemingly very uptight, notes a discrepancy between the test information in his syllabus and that given by Present Mic. He also takes the opportunity to call Izuku out for his fanboyish muttering.

The discrepancy didn’t require his intervention, though, as it was just the final note on the rules of the test. All of the applicants will be split up in to groups and released in to mock city blocks, which will then be swarmed with robots. Destroying the various robots will award each person a certain point value depending on the size of the robot, except for the largest. These giant robots, the last to be explained, are not worth any points and are meant to be overwhelming if not avoided.

Standing at the testing ground entrance, Izuku shakes with nerves and excitement as the moment approaches to finally prove himself. 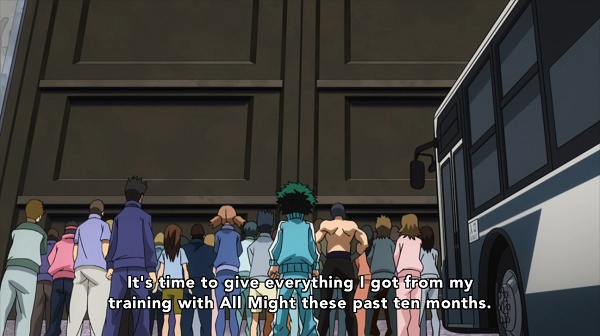