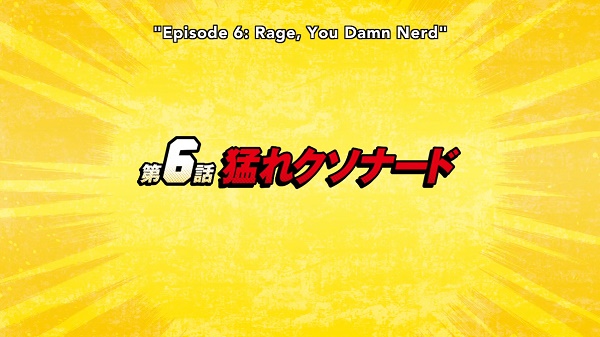 At every moment, from childhood to high school, Katsuki Bakugo has dismissed Izuku Midoriya. As children, Izuku fawned over Bakugo, who brushed off the praise as statements of the most obvious truth. Once Katsuki, or “Ka-chan” as Izuku calls him, manifested a Quirk, his megalomania reached new heights. Any challenge to his constant displays of dominance only made him angrier, and yet the powerless Izuku has always challenged that dominance while quaking in fear.

Now, Izuku has used his inherited Quirk– One For All– to throw a softball over 700 meters. The feet enrages Bakugo, who has only ever known this boy as a fearful, powerless thorn in his side. The fury this ball throw manifests is not proportional to its importance, though. While it’s the only hero-caliber test result Izuku managed throughout the day, it isn’t enough to bump him above last place on the scoreboard. Expulsion seems certain, except to the savvier students who have already seen through the ploy. Because it is a ploy. Their teacher, Aizawa, had lied about the severe punishment for coming in last as a means to draw the full potential out of each student. Or, maybe he saw enough potential in the class regardless of their scores. Tomorrow, they head to “Basic Hero Training,” where All Might takes over as instructor. 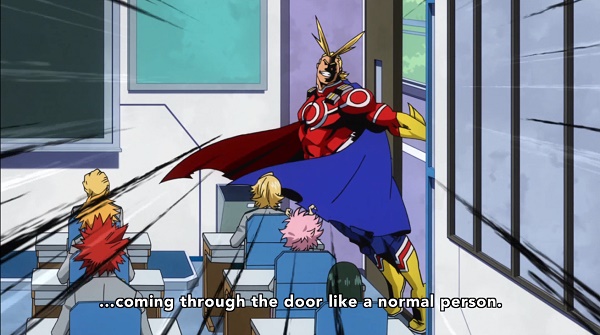 With their potential measured, they move on to a course that will test it in action. Most students receive school issued costumes based on their Quirks and personal specifications, except for Izuku. Having no registered Quirk, fate intervened in the form of a loving mother. Weeks prior, she looked over the sketches in his notebook as he slept and, as an apology for not believing in his dreams of professional heroism, she made a costume to his specifications. Compared to some of the high tech outfits worn by his classmates, it’s a very simple costume, but the love in its making is obvious, and it hews close to the All-Might-inspired design. 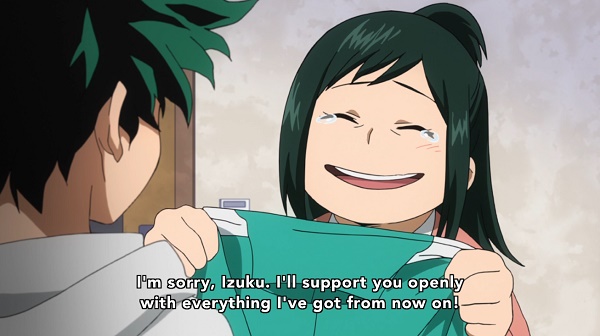 Everyone is decked out in flashy garb as they head back to the mock-city training ground. This time, the test is a smaller scale two versus two affair. One team will be playing the role of villains, guarding a fake bomb within a building, while another duo tries to subdue them or take control of the bomb. All Might lays down the rules and splits the class in to teams, pairing Izuku with gravity controlling “infinity girl,” Ochako Uraraka. Izuku’s nerves about being paired with his crush are put on the back burner as All Might randomly assigns their villain counterparts: Bakugo and the incessantly righteous Tenya Iida. “A fated battle between men,” as Uraraka puts it.

Izuku isn’t willing to pin this on fate, but his conflict with Bakugo has been lifelong. Even now, Bakugo fumes at the very idea of Izuku having a Quirk. How could this kid who he nicknamed Deku, translated as “useless,” have had a Quirk all along? How could it be such a powerful Quirk, and did Izuku keep it a secret just to make Bakugo’s bravado look foolish? Of course this all must be about Bakugo, but how? Not willing to spend more time thinking about it, Bakugo stays true to character by rushing in to violence.

Uraraka and Izuku– now warming up to the name “Deku” since Uraraka spun it as a play on “You can do it,” rather than “useless”– creep through the building cautiously. Izuku knows they’ll be forced in to a fight, but believes using One For All will result in someone’s death. It’s up to his and Uraraka’s wits, and her gravity powers to get them through. Just as Izuku expected, Bakugo leaps out from a blind corner with hands exploding. First, Deku dodges. Then, he reverses his childhood rival’s anger with a judo flip, slamming Bakugo’s back into the ground. 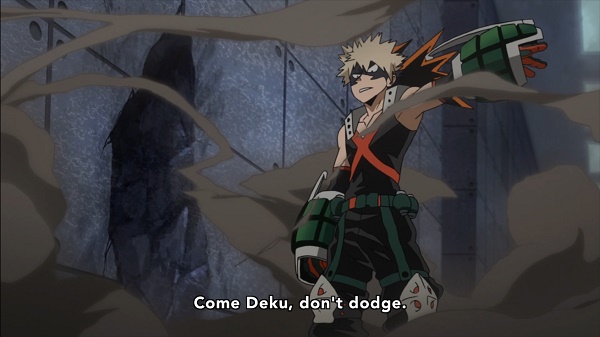 Fate may have staged this battle, but Izuku’s been preparing for it for years. He can’t help but revert to fawning over Bakugo. His opponents moves are only so transparent because he’s been taking notes on all of the greatest heroes abilities for years, and of course he holds Bakugo in such high esteem. Even if he’s shaking in terror, Izuku has almost as much experience with Bakugo’s power as Bakugo does. Not one to play against type, seethes, then bursts. This is the thing he hates most about Izuku; even when he’s scared he doesn’t give in. A fated battle between men.