Home » The Daily Bugle » MY HERO ACADEMIA Recap: (S2E3) In Their Own Quirky Ways

MY HERO ACADEMIA Recap: (S2E3) In Their Own Quirky Ways 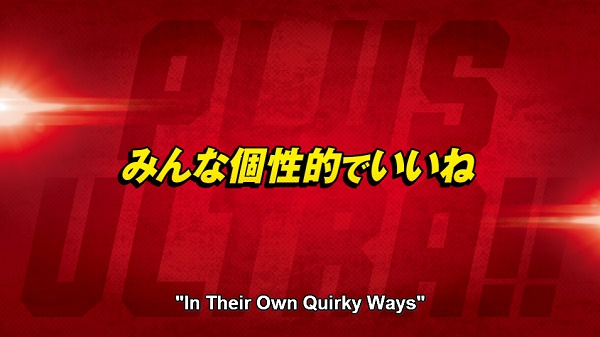 A swarm of building-sized robots goes tumbling– knocked off balance by a wave of ice– with a swipe of Shoto Todoroki’s hand. The son of the most successful professional hero, Flame Hero Endeavor, slips under the crumbling machines as they fall in the path of his pursuing schoolmates. With talent scouts in the audience, everyone feels the pressure to show their stuff on this obstacle course, but a handful of students are here to prove something more.

Tenya Iida wants to prove his abilities to his family of successful heroes. Ochaco Uraraka believes a good performance at the Sports Festival can save her family’s construction business. The suspicious purple haired boy from General Studies claims he’ll work his way into the Hero class. They’ll all be chasing these dual ambitions in the shadow of two others’ conflict. Todoroki has been wary of Izuku, based solely on Midoriya’s relationship with All Might. Though his suspicion is warranted, his commanding lead leaves little need for concern. The students fight their way through the remaining smaller robots, putting to use their Quirks and experience in combat with the League of Villains.

Using his Quirk too soon could mean the end for Izuku, so he has to fall back on his ingenuity and strength training. Dodging robot arms, he grabs a slab of metal that was knocked loose from one of the machines. As the attack bot reels around for another shot, Izuku slashes its arm and breaks it free from the robot’s body. With her Quirk of creation, Momo Yaoyorozu pulls a cannon from her stomach and finishes off the metal horde with an artillery barrage. The path is clear for the stragglers to catch up. 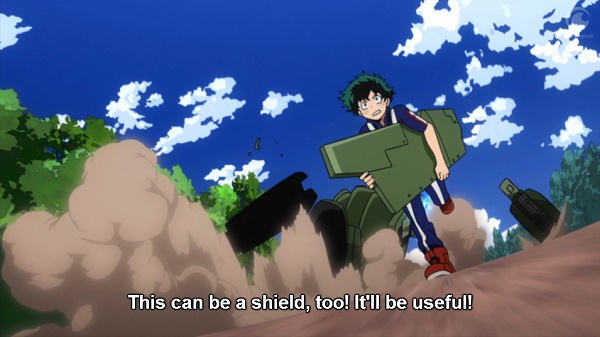 Though speedier students like Bakugo and Iida are gaining on Todoroki, the frosty teen is the first to reach the next obstacle: a canyon dotted with stone pillars connected by tightropes. Gliding across freezing ropes, Todoroki maintains his lead with ease, but he can’t simply swat this obstacle away, and his peers are gaining ground. Tsu’s jumping abilities and sticky grip make easy work of navigating the tightropes, while Bakugo’s explosions propel him over the ropes altogether.

With more panache than anyone else, Support Department student Mei Hatsume seizes on this opportunity to shine. Unlike students from the General Studies and Hero courses, Support students are allowed to bring any equipment or costuming that they build on their own. Firing a grappling line across the canyon, Mei hopes to draw the eyes of hero equipment manufacturers with her line launching belt and hover boots. Her line reels and she zooms across the expanse, clearing the distance more quickly than anyone else. And yet, Todoroki still holds the lead, and Izuku is straggling near the back. 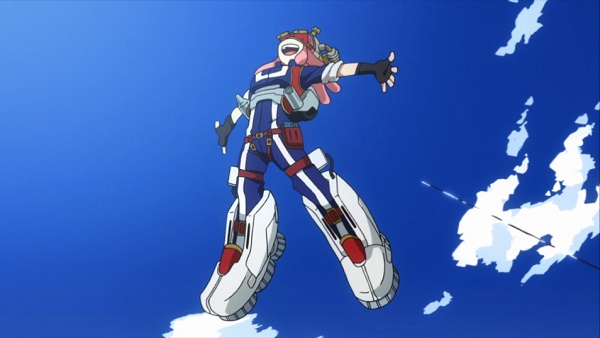 Still hauling the metal slab, Izuku gradually pulls himself across the ropes. Reaching the next obstacle, the students realize that it has the potential to equalize the last leg of the course. Faced with a minefield, they all cut a slow, cautious path between the explosives. Should they misstep, they won’t be killed, but will be sent flying, risking injury and lost time. Todoroki’s lead becomes a liability, here, as all of the mines in front of him are still intact. He could freeze the ground and stroll to the finish, but that would give his pursuers a safe path to the end as well. His careful consideration is quickly dashed aside by the guy he didn’t think to challenge: Katsuki Bakugo.

Who better to disregard the danger of explosives than a living explosive? Blasting forward, recklessly setting off every mine he passes, Bakugo vaults into a neck-and-neck battle with Todoroki. These two are so far ahead that they have no clue what Izuku Midoriya is cooking up at the start of the minefield until its two late. Bakugo and Todoroki’s focus on each other is shattered by an enormous explosion.

Flashing back a moment, we see that while everyone else was carefully stepping around mines at a slow methodical pace, Izuku was using his chunk of metal to dig them up. Onlookers didn’t know what to think as they watched him frantically pile dozens of mines into a hole. Now, as a plume of pink smoke fills the sky, they know. Blasting out of the smoke, riding his metal boogie board through the sky is none other than Izuku Midoriya. As quickly as that, he’s closed the gap with Bakugo and Todoroki, but he’ll need something more to get ahead of them as they near the end of the minefield.

Swinging all of his momentum through the metal plate, Izuku triggers all of the mines around his two main competitors. While they’re caught in the blast, he tumbles forward off of the explosion, somersaulting to his feet and immediately into a sprint. The stadium field opens up before him as he claims first place. The crowd goes crazy, but Izuku isn’t certain he deserves it. He chalks his success using the piece of metal up to luck, but he’s resolved to do more. 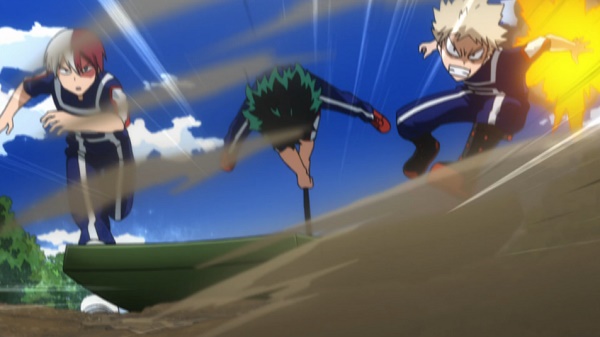 As Todoroki, Bakugo and the stragglers make their way onto the field, Midnight explains the next event: a cavalry battle. The top 42 finishers of the obstacle course will choose their own teams, then be pitted against each other. To make things a little more fair and a lot more interesting, there will be a point based bounty system. Each student will be worth a certain point value in defeat based on their performance on the obstacle course. The better they did, the more points their worth and, ostensibly, the less likely anyone will want to team up with them. Being worth more points means you’re a bigger target, and maybe your defeat will be enough to seal someone’s advancement.

Here is where Izuku’s clever Quirkless victory turns sour. While most of the students are worth dozens of points, First Place Winner Izuku Midoriya is worth ten million points. 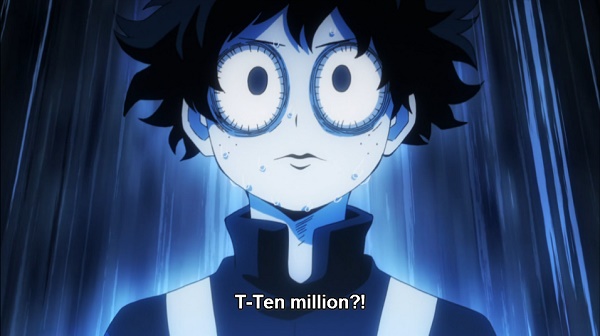 Next Episode!
The students will split themselves into teams, but no one wants to paint themselves with the huge target on Izuku’s back.