Hosu City burns, but My Hero Academia likes the heat. With Tomura Shigaraki’s (Koki Uchiyama) fresh trio of Nomus rampaging, and Hero Killer Stain (Go Inoue) looking to finish his tally of four defeated heroes per city, are there enough Heroes in Hosu to stop the carnage?

Probably! Between Izuku (Daiki Yamashita) and Gran Torino’s (Kenichi Ogata) happenstance derailment in town, and everyone else’s suspicions that Stain will strike where he has struck before, Hosu City is the place to be. A group of new Nomus is just a bonus nightmare. While most of the local heroes are severely outmatched by the genetically modified behemoths, Gran Torino’s jet boosted hands and feet at least let him land some hits while avoiding taking any. Given the lengths to which All Might had to go to defeat the original Nomu, it seems like the best any of these Heroes — Gran Torino included — can manage is distraction and damage control.

They hardly have time to consider that the Nomus themselves are a distraction, of sorts. While Shigaraki genuinely wants them to wreak mindless havoc, his thin plotting has opened many gaps through which Stain can slip to take down Heroes without interference. That’s the fate that has befallen Tenya Iida (Kaito Ishikawa), at the end of his path to vengeance. Dashing into battle with a guy literally called “Hero Killer,” the young untested UA student is immediately cut by one of Stain’s blades. And with that cut, the trademark speed of his family’s Quirks is rendered motionless. Pinned to the ground with Stain’s sword through his shoulder, Iida still rages for revenge, completely blinded to the hopelessness and folly of this whole endeavor.

If there’s one thing a bloodlust-driven shonen character can count on, its that their pure-hearted friend will always show up to guide them back to the light. Bouncing from wall to wall before laying a “smash” into Stain’s face, Izuku Midoriya intends to be that pure-hearted friend. Though Iida’s still determined to wallow in his fury and inadequacy, he does clue Izuku into the apparent connection between Stain’s blades and paralytic Quirk. With that info and his recent mastery of a smidge of One For All, Izuku darts between Stain’s legs, then leaps above his head to land an Izuku sized Texas Smash on the Hero Killer’s noggin. 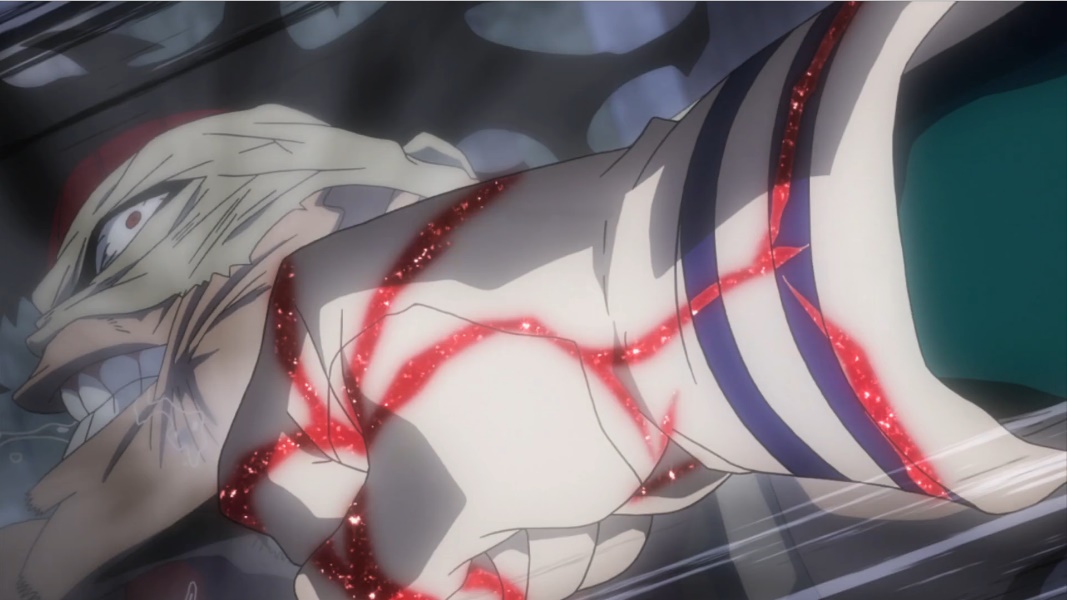 It seems like it’ll take something closer to an All Might (Kenta Miyake) sized smash to knock this guy down, though. In this moment of reprieve, Izuku texts out his location with his phone behind his back. Stain shrugs off the hit, then licks a tiny drop of blood from one of his blades. With that, Izuku is frozen in place. It’s not the blades that are at the heart of Stain’s Quirk, but blood itself. He’s the ultimate realization of the “knife licking villain” archetype, though instead of just licking his blades to show a mad lust for violence, he does so to consume the blood of his enemies, paralyzing them for roughly eight minutes.

Though ineffective, Stain is impressed by Izuku’s display. His murky moral code congeals into something a little more recognizable as he walks back toward Iida to murder him. Stain will let a Hero live if he believes they’re in this line of work specifically to save people, but if he gets a whiff of capitalist ambition, vengeance, or vanity, that’s enough to justify his murderous intent. The strength of My Hero Academia — and any good shonen series, really — is the deep roster of good hearts. There should never be just one character putting their life on the line to save another.

Raising his sword for the death blow, Stain is once again pushed back, this time by a burst of flame from the shadows. Responding to Izuku’s vague location post, Shoto Todoroki (Yuki Kaji) joins the defense of his classmate, his left side ablaze. A brief bit of flashback and inner monologue reveals some of what happened between Shoto and his parents, recently. At the hospital, he reconciled with his mother and she encouraged him to pursue his ambition to the fullest. At his father Endeavor’s (Tetsu Inada) Hero agency, he signed up in spite of their strained relationship, determined to learn what he can from the second ranked Hero.

With fire and ice both flying freely, he pushes Stain back from his frozen friends. Izuku lays out the full extent of their understanding of Stain’s Quirk, but avoiding it continues to be a tall order. With throwing knives and blades whirling, Stain lands multiple hits on Shoto, but can’t get close enough to consume the blood. Todoroki’s best bet is to hold out until some pros can come to their aid, but with the Nomus running wild there’s no telling how long they’ll have to wait. Things aren’t looking great. Iida is still fuming, though now his desperation for revenge is being subsumed by his fear that his friends will die in his place, or maybe that they will take his vengeance from him. Todoroki is on the ropes but, shockingly, Izuku is back on his feet. 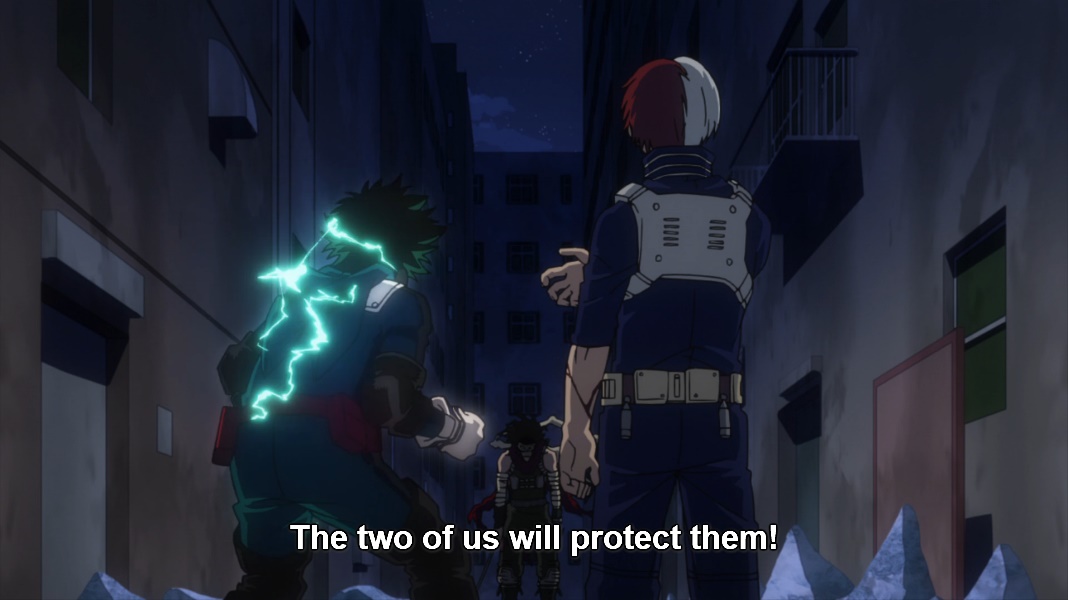 If there’s a time limit on Stain’s Quirk, then Izuku should’ve been the last to regain movement. Always the smarty, Deku narrows down the possible explanations and hits the nail on the head: there’s a quirk to Stain’s Quirk based on blood type. The paralysis lasts longer on certain blood types, but is by far the least effective on Izuku’s — type O. With their newly formed tag team, Izuku and Shoto hope they have what it takes to keep Stain occupied until reinforcements arrive. The more they fight, the faster Stain seems to get, and the more Iida sulks about his friends interfering.

Finally, Shoto lays some harsh truth on his prone classmate: if he’s going to complain this much, he’d better stand up and help. “Look properly at what you want to be.” The words land, and Iida shakily starts to move once again.

Stain presents an interesting conundrum for Izuku. For a while, I assumed Stain was some sort of lizard/toad guy. His huge, gross, bumpy tongue and paralytic Quirk seemed to back that up, but now I’m less sure. More so, his consumption of blood should have interesting ramifications for the bearers of One For All. All Might and Izuku’s shared Quirk is supposed to be unique in that it can be passed on through consumption of DNA. Though All Might made Izuku eat a strand of his hair to inherit the Quirk, he made it clear that any source of DNA would do. Now that Stain has licked up Izuku’s blood, is One For All burning inside the Hero Killer? Is this something they’ll sidestep entirely as if it didn’t happen, or will the difficult learning curve of the Quirk be used against Stain?

Next Week! Gran Torino and Endeavor team up to fight some Nomus, and Iida regains his footing and his purpose.