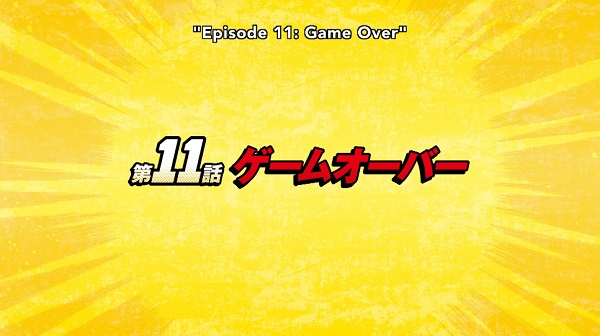 Leaving their sinking boat and a writhing mass of sticky villains adrift, Tsu, Izuku and Mineta plan their next move. They could break for the exit, but Izuku fears for their teacher’s safety. Aizawa leapt to their defense a while ago, and he must be feeling the strain of this sustained battle. They swim to shore and watch from the edge of the fray.

Throughout the facility, the other students are handling the goons sent to waylay them. Todoroki, striding through a mountainous section of the facility alone, flash freezes one group of villains after another. With his opponents on ice, he interrogates them about their boss’ true intentions.

Momo Yaoyorozu is also stranded in the faux-mountains, saddled with the duo of Kyoka Jiro and Denki Kaminari. Though these two were paired up in the last exam, they’re hardly a cohesive team. Denki can generate electricity, but can’t project it and didn’t think to design a costume that would compensate. He can only release electricity in all directions, or direct it through physical contact. Kyoka puts this knowledge to use by kicking Denki into the villains, using him as a human stun gun. Despite their effective clumsiness, Momo isn’t impressed by her team’s tactics. Carelessness aside, they bought her time. Using her Creation Quirk, Momo can generate any familiar molecular structure from within her body. A large insulated tarp sprouts from her back, giving her and Kyoka the necessary shielding to allow Denki to let his electricity loose. Unleashing a blast of electricity, Denki fries the villains, his own brains, and– for some reason– most of Momo’s clothes. 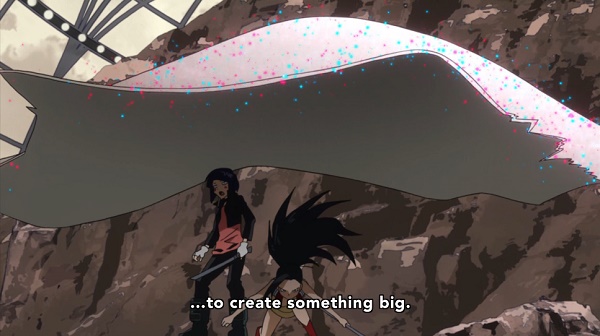 Watching from the edge of the lake, Izuku, Tsu and (to a much lesser extent) Mineta, hope for some opportunity– some opening– to aide their exhausted teacher. Aizawa flips and kicks and punches through more and more lowly villains as the mysterious man covered in hands, and a large, purple, muscular creature watch. While Aizawa lays out more goons, Handman starts his approach, counting down from twenty. Spotting the new combatant, Aizawa plunges his elbow in to the handman’s gut, but something’s off. The creep’s countdown finishes and he lets Aizawa in on his insight: he’s seen through Aizawa’s Quirk and knows there’s a brief gap where it’s inactive. He has taken advantage of that gap, anticipating Aizawa’s elbow, catching it in his hand, and now using his own Quirk to dissolve the hero’s flesh. Thinking he’s engaged the “boss,” Aizawa ignores his disabled arm and goes right back to fighting.

Unfortunately, Handguy is just the brains of this operation. The “boss” is the one with the visible brains– the purple mass of muscles called “Nomu.” With a beaked face full of teeth and eyes seated right in his exposed brain, Nomu is a grotesque being genetically engineered specifically to kill All Might. In a blink, it grabs and crushes Aizawa’s arm like a twig, proving it has the strength to go toe to toe with the Symbol of Peace.

Back at the entryway, Space Hero Thirteen uses their Black Hole ability to devour the warp-gate villain, but the amorphous malcontent didn’t warp in to this fight blind. He knows Thirteen is a support hero, not a fighter. Using the hero’s inexperience against them, a warp gate opens behind Thirteen redirecting Black Hole at their own back. Thirteen’s space suit shreds open before they can react. 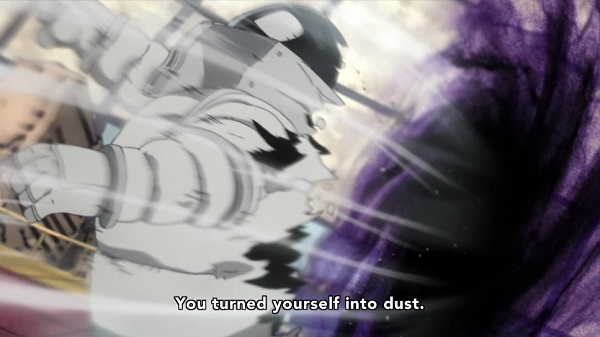 Both pro heroes are down, and the students who know this are terrified by the reality of professional heroism. Nevertheless, Tenya Iida has a duty to his classmates. Sprinting for the door, he tries to slip the ever expanding grasp of the portal man. Just as the villain’s warp gate body is about to entangle Iida, Ochako Uraraka cracks the swirling mass’ vulnerability. Inside that inky void, there’s a metal cylinder that must be related to his physical form. She applies her gravity nullifying power to it and tosses it skyward. Negating distance is this guy’s whole thing, though, so he tries to warp back, but other students lend their Quirks. One launches a strand of tape-like-substance, sticking to the chunk of metal like Spider-man’s web, and hands it off to his wrestler lookin’ classmate. The large muscular boy spins about, tossing the warp-gate’s body like a hammer throw. Iida makes it to the door, pries it open, and is off to summon reinforcements.

Having failed to keep the situation contained, the warp-gate returns to Handman to deliver the bad news. Iida will surely bring dozens of pro heroes back with him, and that wasn’t part of their assassination plan. They won’t get to kill All Might, so they’ll just have to kill his students instead. The hand guy reaches for Tsu’s face, ready to dissolve it as he did Aizawa’s elbow, but nothing happens. With the last of his strength, still crushed under Nomu’s weight, Aizawa cancels out Handman’s Quirk. Another smash from Nomu stops Eraserhead’s heroics, though, and Hadman really wants to dissolve Tsu’s face. Izuku only sees one way out of this, and that’s sacrificing his arm to destroy this handsy creep. He unloads a “Smash,” and to his amazement, doesn’t break his arm. 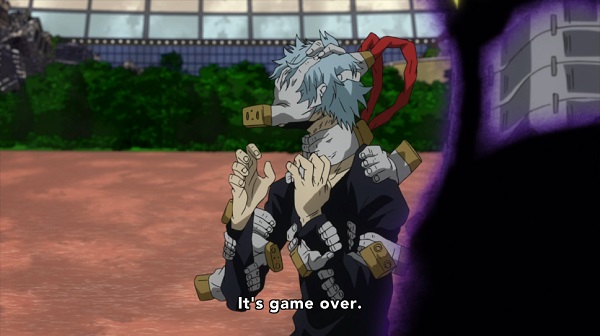 Just as he begins to celebrate his apparent mastery of his Quirk, the dust clears, revealing not an obliterated Handman, but Nomu. The creature had jumped to its cohort’s defense in the blink of an eye, and completely negated all effects of Izuku’s Quirk. Seeing how this being is completely unaffected by All For One, Izuku’s heart sinks under the possibility that this thing could actually kill All Might. There are worse things to fear in this moment, though. Handman continues creeping toward Tsu, and now Nomu is ready to kill Izuku. With doom impending, the doors to the facility explode. It’s alright, now. All Might is here.

Striding onto the battlefield, the besuited Symbol of Peace has finally arrived. And he’s pissed. 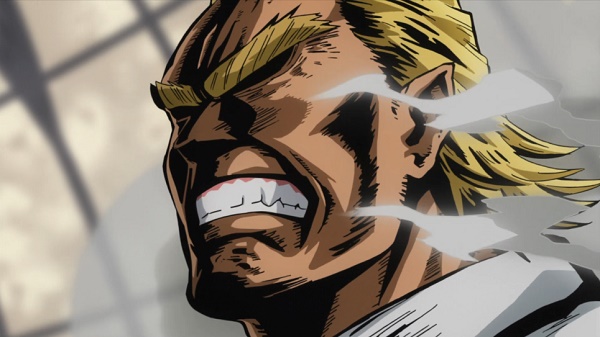