As Summer comes to an end, so does the second season of My Hero Academia. With the struggles of the Practical Exam behind them, the students wait anxiously for their results. Who made the grade? Who will be left out of the forest retreat training camp? What new struggles will they encounter?

A small portion of the class are fairly certain they failed the practical exam, but aren’t sure of the grading method. Before they can stew in their worry for too long, Shota Aizawa (Junichi Suwabe) throws them for a loop. Yes, a handful of students failed the practical exam, but no one failed the written exam. Who could benefit more from a training camp than the kids who failed? So, everyone gets to go! And the kids who failed will have to work extra hard! 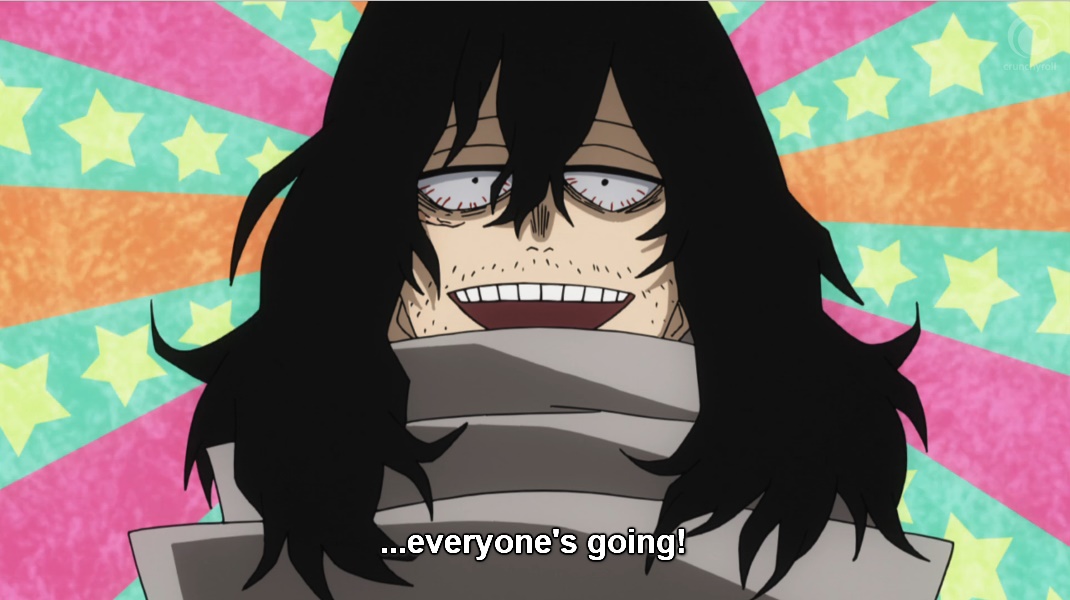 The upcoming trip has everyone buzzing, but most of them are realizing they’ll need new clothes and equipment for an outdoors excursion. This brief respite at the end of the semester is prime time for a shopping spree!

They all head off to the mall and, needing to buy different things, split up. Izuku (Daiki Yamashita) is left alone with Uraraka (Ayane Sakura), and their friendship is given only a moment to breathe before Aoyama’s (Kosuke Kuwano) query about her feelings for Izuku starts ringing in her ears. Flustered and blushing, she rushes off to buy bug spray, leaving Izuku on his own.

In the dive bar hangout of the League of Villains, ghastly warp-gate bartender Kurogiri (Takahiro Fujiwara) welcomes some promising new recruits. Himiko Toga (Misato Fukuen), a deranged high school student, and a guy evasively calling himself “Dabi” (Hiro Shimono), a stitched up emo Frankenstein’s monster, are both big fans of Stain. Unsurprisingly, this fandom immediately gets under Tomura Shigaraki’s (Koki Uchiyama) skin. None of his villainy has made a dent, but Stain gets captured and becomes a folk legend. Angry and uninterested in leading Stain Stans, Shigaraki beats his feet to puzzle out their differences. 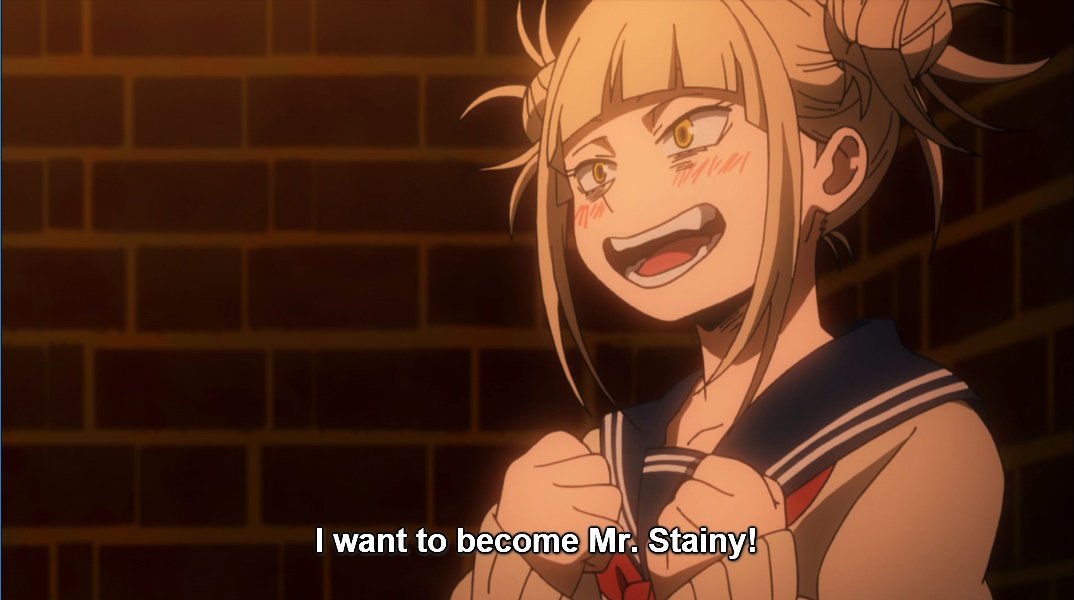 For all of his moralizing bluster, Stain just seems like another spiteful murderer to Shigaraki. If they’re both just out to kill the people they don’t like, then why do people perceive Stain so much more favorably? He wanders aimlessly, eventually finding himself at the mall staring at a lonesome Izuku Midoriya. A chance encounter.

Completely unaware of the lurking threat, Izuku is vulnerable as Shigaraki wraps an arm around his shoulder. At first, Izuku takes it as an awkward fan overstepping some boundaries, but he eventually pieces together that this is a dude he’s met before–just as Shigaraki takes hold of his throat.

Before the boy’s heroic instincts can kick in, Shigaraki warns Izuku that he and a couple dozen people could be reduced to dust before another Hero shows up to subdue him. If young Deku doesn’t want those deaths on his head, then he’ll need to have a seat with the leader of the League of Villains and have a nice chat.

Shigaraki poses his quandary to his captive advisor: why do people respect Stain? Izuku lays it out bluntly that, even though he was a murderous terror, Stain professed a conviction that people could get behind. Like Izuku, Stain was instilled with a core belief about Heroism based on the influence of All Might (Kenta Miyake). With that, Shigaraki starts connecting dots.

He had conviction all along! Maybe he didn’t appreciate it, and maybe no one else did either, but from the start this has all been about All Might. More specifically, this has all been about murdering All Might. Overcome with the elation of this revelation, Shigaraki squeezes tighter and tighter on Izuku’s throat. Before he can strangle the life out of the boy, Uraraka returns to make amends.

Uraraka immediately notices something’s amiss, demanding this creep unhand her friend. Knowing the danger of the situation, Izuku shrieks for her to stay away. For once, Shigaraki isn’t here to make a scene. He has the answers he wants, and casually slips away into the mall crowd with a final warning that their next encounter will be deadly.

In the mysterious lair housing the true leader of the League of Villains, All For One (Akio Otsuka) is elated with Shigaraki’s progress. Now that the boy has found his conviction, he’ll grow into a suitable leader for the League, and eventually into All For One’s replacement. As he voices this assessment to his doctor cohort, we see rows of vats filled with brains. What’s the deal with these brains? Are they the brains that bulge from the head of each Nomu? Are they clones of All For One’s brain? Are both of those things true, and that’s how they control the Nomus? Is he going to put his brain in Shigaraki’s body?

These mysteries, and more, will have to wait until season three.