MY HERO ACADEMIA Recap: (S01E10) Encounter with the Unknown 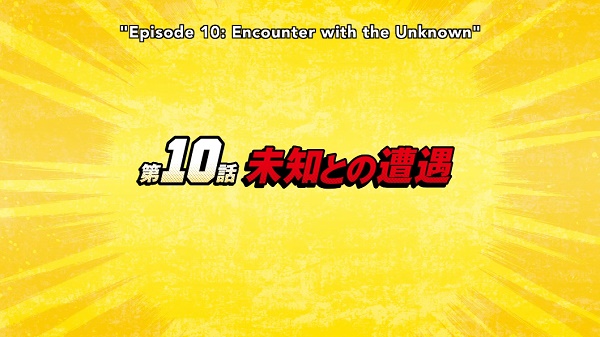 Gathered together under the massive dome of UA’s Unforeseen Situation Joint, teachers Shouta Aizawa and Space Hero Thirteen have unwittingly lead their class in to the fray. As suggested in the previous episode, there was more to the hole in UA’s defensive wall than an intrusive group of reporters. Somehow, the self styled “League of Villains” not only broke through, but also learned details of the staff’s schedule. Lead by an anxious, creepy soft spoken guy covered in disembodied hands, and a person whose body is an amorphous swirling black cloud, the villains are here for one reason: to kill All Might. 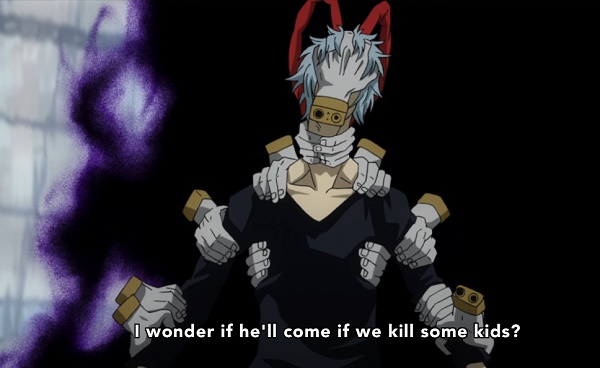 Trusting Thirteen to watch over the students, Aizawa puts on his goggles and leaps in to the horde of goons, showing villain and student alike how the pros do it. With his eyes hidden by his goggles, the target of his Quirk remains a mystery right up to the moment that he knocks an opponent’s block off. Shouta Aizawa, or “Eraserhead,” can negate most Quirk with a glance and, for the ones he can’t, he’s an extremely skilled hand to hand fighter. Every Quirk has its limits, though, and the swirly cloudman pinpoints Aizawa’s.

Slipping past Aizawa’s debilitating gaze, the swirling mass emerges in front of the exit, blocking the students’ retreat. Bakugo and Eijirou lunge at the portal-bodied villain, but are easily evaded. The group plots a call for backup, trusting the mission to their speedy legged class representative, Tenya Iida. Before they can do much, the portal person goes on the offensive, engulfing most of the students in the villain’s expansive form. Within a moment, they’re all scattered throughout the facility where groups of specialized villains lie in wait. 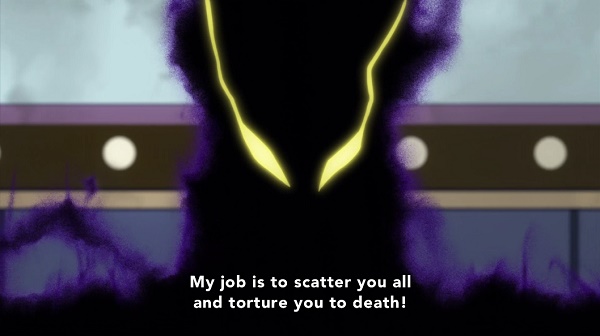 Splashing down in the artificial lake, Izuku makes for the surface as he sees a sharklike villain eagerly darting toward him. Before the sharkman can clamp his jaws down on the boy, the froggy feet of Tsuyu Asui (Tsu to her friends) crush his cartilaginous skeleton. She’s already rescued another waterlogged classmate– Minoru Mineta– and now she grabs Izuku with her lengthy tongue, hauling the trio on to a nearby boat. At the moment, Mineta the pervy coward would be more useful as fish food. His shtick to this point has been ogling the butts of his female classmates, and his thanks to Tsu is noticing the size of her breasts. Now that they’re high and dry, he adds panic and immediate submission to his repertoire. 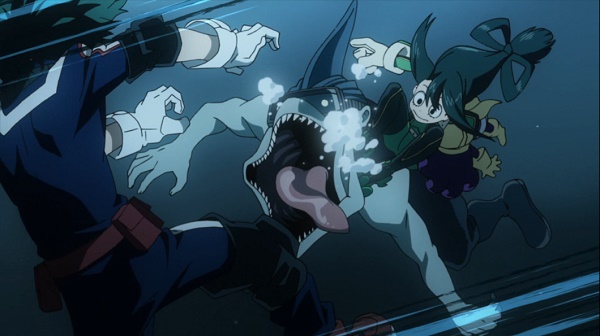 Not bogged down by their third, Izuku and Tsu set to scheming. They know the villains have information on the teachers’ schedule, but they must not know anything about the students’ Quirks. While they prepared their villain squads by sending specialized people to each area of the facility, they wouldn’t have dropped Tsu in the lake had they known about her aquatic Quirk. With the complexity and scope of the villains’ plot, Tsu judges that they must actually have a viable plan for killing All Might. They’re in deep, and it’s going to take some quick thinking to stay above water.

Surrounding the boat, the squad of wet bandits aren’t looking to give the kids any more time. With a Quirk that turns water in to giant limbs, a villain chops through the boat and waits to prey on the helpless passengers. More aware than most of All Might’s true vulnerability, Izuku jumps over the railing ready to fight to protect his mentor. Charging his Quirk, All For One, into his thumb and middle finger, Izuku screams, “Delaware Smash!” With a mighty flick, he blasts the lake, leaving a whirlpool where he broke the surface tension. Tsu, with Mineta in hand, leaps from the wreckage to grab Izuku. Inspired by Izuku’s trademark fearful fearlessness, Mineta finally musters his courage. He plucks the sticky spheres that sprout from his head and hurls a barrage in to the whirlpool. As the spheres and villains swirl together, their unbreakable adhesive bond binds the group into a harmless writhing mass. 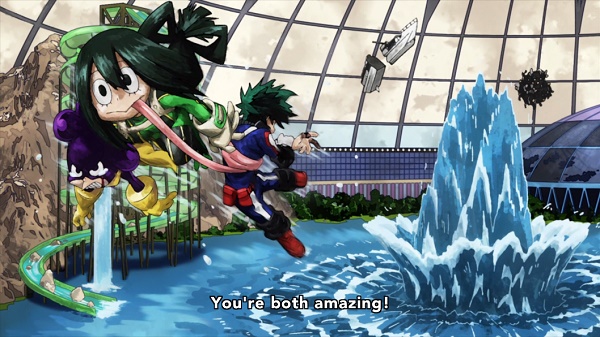