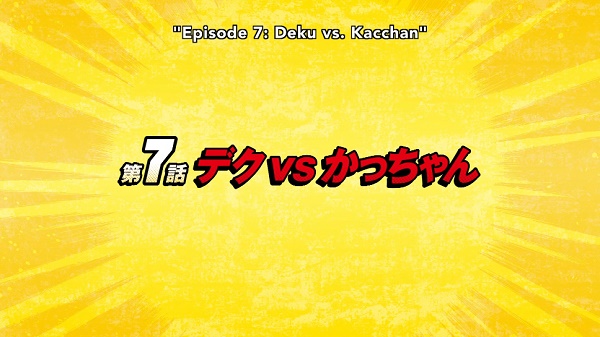 A fated battle between men, rooted in an embittered childhood relationship. Katsuki Bakugo has always been a jerk to Izuku “Deku” Midoriya, but the degree of jerkiness gradually increased when the boys were four years old.

Even before Quirks came in to play, Bakugo felt superior to Izuku. Once his Quirk manifested, Bakugo’s self absorption took firm root. Now, not only did he think he was great, but everyone who saw his flashy explosive palms agreed. With a Quirk like that, he was destined to be a beloved hero. Being so obviously amazing, Bakugo fears only one thing: weakness. The plainest expression of this unheroic flaw is his constant abuse of weaker kids, most focally Izuku. 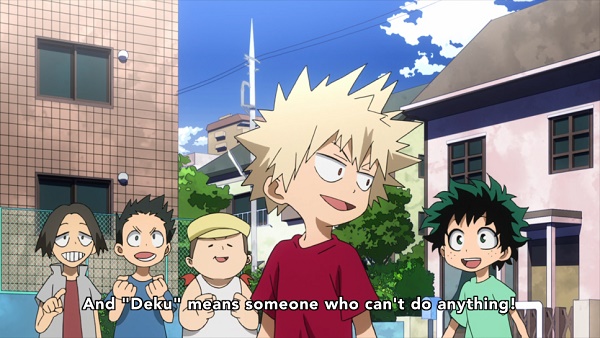 As they fight, Izuku employs every trick he’s learned from years of suffering beatings at Bakugo’s hands, along with tactics he’s observed used by professional heroes. Conversely, Bakugo rages off the hinges fueled by memories core to his hatred of Izuku. He’s angry about the times Izuku stood up to him, even while shaking with fear. He’s angry that, with this apparent immense power, his power dynamic with Izuku may be entirely false. Most of all, he’s angry about ever being offered help by this weakling.

Bakugo didn’t need some Quirkless kid helping him to his feet after a fall as a child, and he didn’t need his help escaping the grip of a slime monster, either. Bakugo can only recognize his own fear when he sees it reflected in Izuku’s eyes, and he hates nothing more. 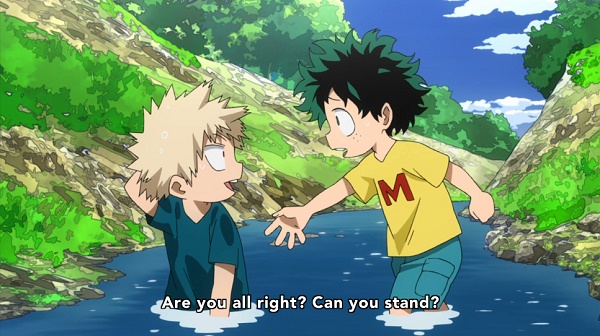 Uraraka reaches the top floor, free from pursuit while Iida guards the fake bomb and Bakugo focuses on Izuku. She watches as Iida puzzles over his role as a villain. Though he aspires to be an honorable hero, his heroic duty at this moment is to be a villain. He must become true evil. His evil persona is, unfortunately, literally laughable. Giggling at Iida’s menacing posturing, Uraraka reveals her position. Her laughter was a bit premature, as the devious Evil Iida was prepared for a showdown with Infinity Girl. Knowing her power over gravity, he moved everything out of the room leaving just him, her, and the bomb.

While Bakugo’s evil may not be as calculated, it’s also less affected. He isn’t trying to kill Izuku; just cause him severe pain and humiliation. Izuku’s out of spots in which to hide, and Bakugo’s grenade-shaped gauntlets are glowing. For the kids with registered Quirks, specialized costumes designed to enable and augment their Quirks were included with admission to UA. Cornered, Izuku plays witness to the enormous focused blast that can be charged within Bakugo’s glove. It’s enough to blow a whole in the side of the building and send Izuku Tumbling.

The devastation of Bakugo’s attack could have brought the building down on both groups, and so he is reprimanded by All Might for acting recklessly counter to the mission objective. With All Might laying in to him through his earpiece, Bakugo doesn’t notice Izuku plotting something with Uraraka. All Might restricts Bakugo’s use of his gauntlets, and so the assault on Izuku continues using the basic mastery of his Quirk. Everyone is very impressed, and a little terrified, by Bakugo’s instinct and creative use of explosions to amplify his movements. On the receiving end of this beating, Izuku can’t find an opportunity to fight back. He’s out of options, and literally and figuratively scrambles back to his corner.

Bakugo lunges for a final attack, and Izuku readies a counter. As they shriek toward collision, a “Detroit Smash” building in Izuku’s arm, he calls out to Uraraka. Redirecting the Smash upward, Izuku sends a surge of air pressure blasting through all five stories of the building an sets he and his partner’s scheme in motion. Grabbing a dislodged concrete column from the wreckage of the top floor, Uraraka negates its weight, then swings for the fences. She sends a barrage of debris sailing at Iida, giving her time to leap on to the bomb. 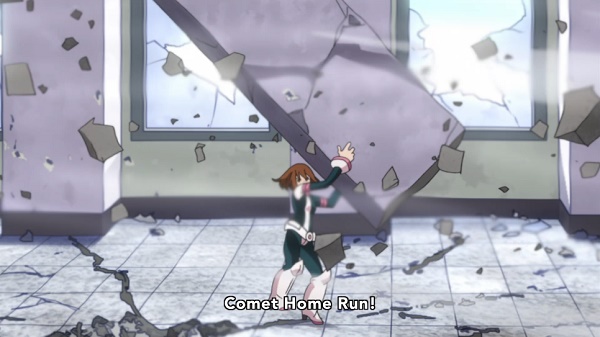 The dust clears. After screaming countless taunts at Izuku over his Quirk, Bakugo finally sees the truth of it up close; one arm bruised and broken from the strain of using his Quirk, and the other scorched from blocking the brunt of Bakugo’s last attack. Gasping out his words, Izuku explains that he didn’t want to use his Quirk, and Bakugo finally understands that Izuku’s deception– and maybe most things in the world– aren’t actually about him. Brash, careless, practiced aggression lost him this challenge, while clumsy, improvised, self destructive teamwork won. 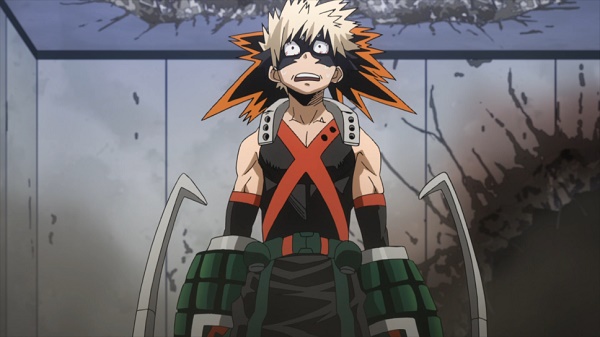 Maybe there’s more to being a hero than fate.