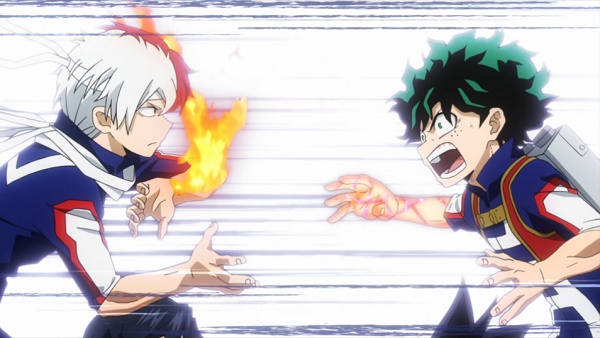 He’s got it! By Jove, I think he’s got it! Things finally start to heat up as the Cavalry Battle wraps up, and Izuku (Daiki Yamashita) sets the stage for the future.

As the overlooked squad of Class B schemers sneaks away with most of Class A’s headbands, Todoroki’s (Yuki Kaji) team squares off with the bearer of ten million points: Izuku Midoriya. Todoroki’s team exists to steal that headband, and Izuku’s group was already in a tight spot. Having already learned who could avoid his ice attacks and how, Todoroki built his team specifically to compensate for his shortcomings. He has Momo and Denki work in unison; Momo grounding the team to avoid Denki’s electricity, and Denki petrifying most of the competition with a million volts. Stuck in place temporarily, even their mightiest classmates are easy prey for Todoroki’s ice.

With Bakugo (Nobuhiko Okamoto) seeking revenge on the sneakthiefs from Class B, Todoroki is free to focus all of his effort on Izuku. He seals off the area with ice, but can only do so much without freezing his own team. Izuku just has to keep away. The jetpack and hover boots supplied by Mei are falling apart, and the defensive power of Fumikage’s (Yoshimasa Hosoya) Dark Shadow is diminished by sunlight. Leaning heavily on his straining classmates, Izuku hopes to just hold out for a couple more minutes. If they can just hold on, the clock will win this fight for them.

They can’t. It wouldn’t truly be a shonen action series without someone dramatically revealing their true potential. Leading Todoroki’s squad, Iida (Kaito Ishikawa) beckons his teammates to hold on tight. Flames belch from the exhaust pipes that sprout from his calves as he bellows the name of his secret technique, “Torque Over-Recipro Burst.” In less time than it took to spit that out, the group blasts past Izuku, grabbing his headband in a blink. While Todoroki has Izuku on the ropes, Bakugo steps to the jerk from Class B. This guy continually goes on about the unassuming complexity of his schemes. For all of his bluster about skipping to the highest ranks unnoticed, he starts drawing a lot of attention from Bakugo. 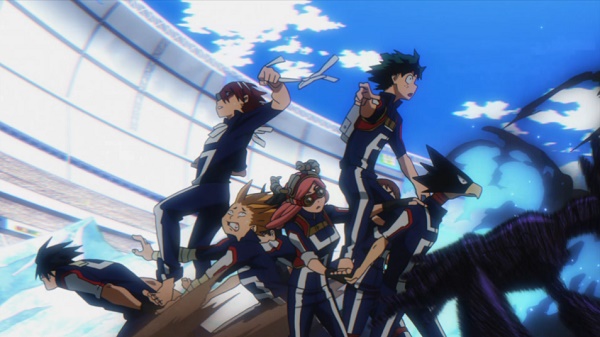 Class B’s Neito Monoma (Kohei Amasaki) peppers Bakugo with incisive insults, succeeding in stoking the explosive teen’s ire. It proves to be a stupid risk. The schemer reveals that his Quirk allows him to briefly use the Quirks of others, but it’s a poor counter to practiced users. With an unexpected degree of leadership — and an expected degree of dismissivness — Bakugo leads his team to vengeance. Blasting himself like a rocket, he steals headband after headband, always being reeled in by the tape spewing elbows of teammate Hanta Sero.

Once again, Class A is dominating the field. The final minute of the Cavalry Battle counts down, and Izuku’s determination falters. Luckily, he’s literally on the shoulders of his friends. Uraraka (Ayane Sakura) starts the team running, and the desires and ambitions of his teammates wash over Izuku. The gap between his team and Todoroki’s closes and Izuku’s arm glows with the power of All For One. Panicking in the face of this unexpected last minute offense, Todoroki instinctively abandons father-hating convictions, letting his arm ignite in flames, but it’s already too late.

Focusing the power of his Quirk into a swipe of his hand, Izuku blasts all the air away from Todoroki’s arm, starving and extinguishing its flame. A shocked Todoroki barely notices as his topmost stolen headband is slipped off.
This was a failure for which Todoroki prepared. On the off chance that someone did get past his overwhelming team, Todoroki swapped his most valuable headband with a less valuable one, leaving Izuku ten million points shy of his expectations. 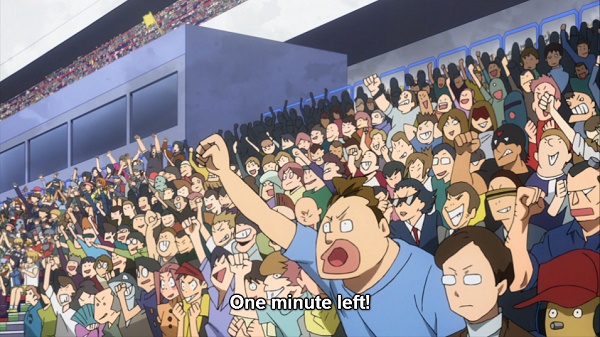 There has to be enough time for another shot — if not for Izuku, then for Bakugo as he explodes into the fray. There isn’t. The timer buzzes, and Todoroki comes out on top, followed by Bakugo. Even without the ten million points, Izuku succeeded to a shocking degree. For the first time ever, he intentionally used All For One without shattering an appendage.

Oh, and Fumikage suruptitiously yanked a few headbands away from Todoroki, securing fourth place for his team. 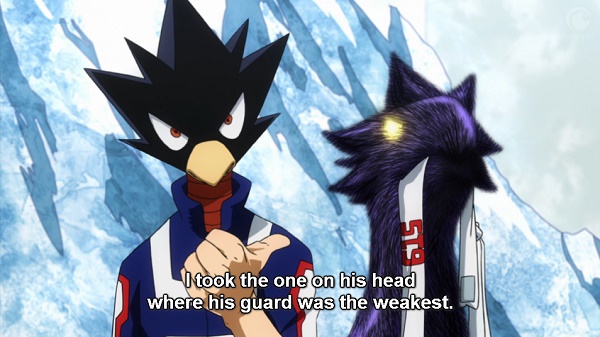