MY HERO ACADEMIA Recap: (S02E06) The Boy Born With Everything 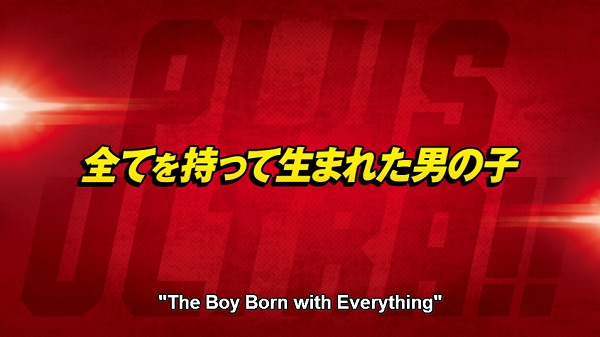 If someone tried to sell me on My Hero Academia by telling me it’s a story about men and their pride, I’d run them out of town on a rail, then find something else to watch. And yet, this show has the Midas touch. Every well trod story line, ever played out trope, every decades old concept can be shiny and golden and new. Though, I don’t think we’ve been introduced to a character with a literal Midas touch Quirk, yet.

The title of this week’s episode is “The Boy Born With Everything,” and it seems to mean “everything” in more of a sense of quantity than quality. As the students recover from the Cavalry Battle and prepare for whatever comes next, the drama focuses on the conflict between Todoroki (Yuki Kaji) and Izuku (Daiki Yamashita) — Todoroki being the titular “boy.” Last week, they found a quiet hallway in which to quietly square off, and now we get to the heart of Todoroki’s drive. 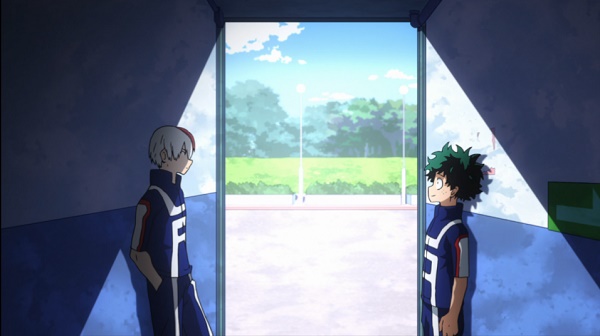 Not only was Shoto Todoroki born with power over ice, but also fire… and an intensely messed up family life. At first, he comes to Izuku seemingly seeking a kindred spirit. When they came face to face in the Cavalry Battle, Todoroki was certain he saw something of All Might’s (Kenta Miyake) power in Izuku, and wondered if this boy was the secret love child of the Symbol of Peace. Izuku tries to brush that assumption off, but can’t hide that he has a connection to All Might. Todoroki was shaken by Izuku’s determination in the Cavalry Battle, and seems to hope he’s found a kindred spirit.

The hot and cold kid at the top of Class A goes on to explain his troubled backstory; one with elements that other students might share. In the first couple generations after Quirks started manifesting worldwide, arranged marriages came back in vogue with the goal of breeding children with superior Quirk combinations. Flame Hero Endeavor (Tetsu Inada), always striving to be #1 (and always falling short to All Might) learned of a woman with an ice creating Quirk and cajoled her family into giving him her hand in marriage.

It wasn’t a happy marriage. Endeavor, at every turn, seems to be a real jerk. Where Izuku and All Might burn with a desire to help others, Endeavor burns with a desire for status. His purpose in life was to be the #1 Hero, not to do things that would get him there and incidentally wind up on top. After spending so long failing to achieve this, he extended his plan to the next generation. If he couldn’t be the top hero, his child would be, and that child would need an exceptional Quirk. 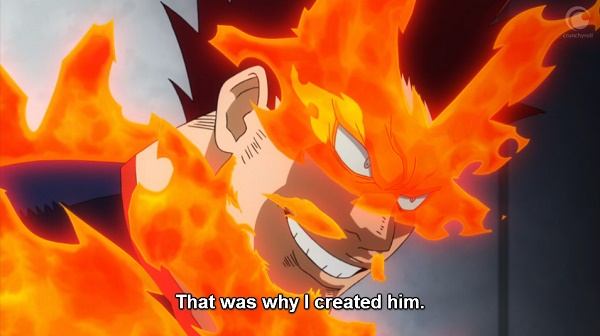 Though Todoroki only speaks briefly of his mother, it’s pretty clear that she was not interested in being forced in to marriage and motherhood just because of her Quirk. She hated Endeavor, and she hated seeing him in their son. Disgusted by Endeavor’s features on her son’s face (and surely in an awful mental place), she poured scalding water on Todoroki, giving him the burn marks around his left eye. Regardless of the physical pain given by his mother, Todoroki vows to avenge the emotional pain Endeavor has caused to his entire family.

He will never use his father’s flame Quirk, and he will achieve the greatness that always eluded Endeavor. To do so, he’ll have to get past the other students and their ambitions. While Izuku’s passion stems from a more vague feeling of general disempowerment and empathy, All Might’s squire holds true to his beliefs. If Todoroki wants to make it to the top, he’ll have to take Izuku seriously.

Watching from the shadows, Bakugo (Nobuhiko Okamoto) wishes anyone took him so seriously.

The weight of another fated battle between men is somewhat lessened as the students who didn’t make the final round partake in recreational games. While preparations are made for the final competition, the runners up do a scavenger hunt with help from the audience. To add to the entertainment, UA brought in cheerleaders — specifically American cheerleaders? — and the perverted gears in Mineta’s (Ryo Hirohashi) head turn once again. Plotting with Denki, the two dorks run to the cafeteria to tell the girls from their class about their required participation as cheerleaders. For whatever reason, they buy Mineta’s story and Momo (Marina Inoue) uses her Creation Quirk to whip up some outfits. Once the ruse is made obvious, they feel a bit put out (Momo most of all, having wasted effort using her Quirk), but ultimately have fun with it. Toru Hagakure (Kaori Nazuka), the invisible girl, relishes the moment most of all, finally being seen. 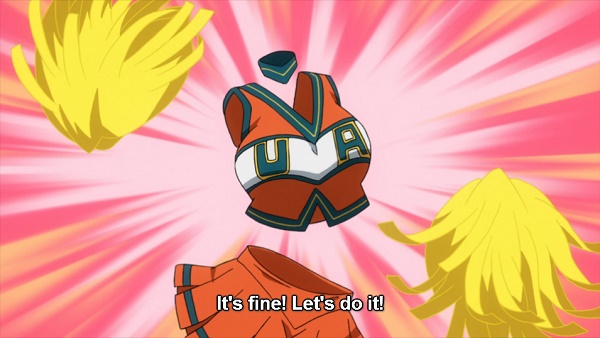 With the lighter fair out of the way, it’s time for the final competition of the UA Sports Festival: a one on one fighting tournament. Fighting tournaments are practically my favorite thing in anime. It’s a grand opportunity for interpersonal drama, underdogs overcoming long odds, and revelations of inner strength. The first revelations come right after the brackets are announced. The tailed boy, Mashirao Ojiro (Kosuke Miyoshi), asks to be removed from the final competition. One of his teammates from the Cavalry Battle joins him in this request. They were both paired with the creepy purple haired kid from General Studies, Hitoshi Shinso (Wataru Hatano).

Neither of the boys recusing themselves can recall the events of the Cavalry Battle. They both suspect they were under the influence of Hitoshi’s Quirk, and they feel no pride in having mindlessly succeeded. Midnight accepts their request, and slots in two of the runners up from Class B. With the brackets set, Cementoss (Kenta Okuma) constructs a fighting ring in the center of the arena, and the students steel their minds for the battles to come.

Most students take this opportunity to quietly center themselves, or blow off nerves. Ochaco (Ayane Sakura) will be facing off against Bakugo, so she shakes off her nerves by going back to cheering. Todoroki will fight the kid who shoots tape out of his elbows, Hanta Sero (Kiyotaka Furushima), so he must feel confident. Izuku’s first fight, however, will be against that purple haired creep with a Quirk for mind control, Hitoshi Shinso. Luckily, he has a friend in the know. Mashirao takes him aside and explains what he knows about Shinso’s Quirk. When Izuku tried to speak to Shinso, Mashirao quickly covered his mouth. There’s definitely some connection between speaking to the weirdo from General Studies and his Quirk taking control of your body.

As he waits to step into the stadium, Izuku is joined by All Might for a pre-fight pep talk. Izuku’s control of his Quirk has improved dramatically, but he still feels like he’s on the brink of failure. At any moment, his control could fall apart. If he’s only made it this far thanks to the help of others, how will he hold it together on his own? Puffing up to full size, All Might brushes aside his pupil’s worries, telling him to just fake it until he makes it. At this point, All Might estimates Izuku can muster about 5% of his Quirk’s power, and that’s been enough to get him this far.

The tournament begins, and the boys step into the ring. Immediately, Shinso starts laying into Mashirao for being a prideful idiot. What good is pride to a loser? Winning is all that matters, and how it’s done is beside the point. And as easily as that, he’s prodded Izuku into a fury. Charging into battle, Izuku starts yelling refutations at his opponent. In the audience, Mashirao can’t believe what he’s seeing. He just explained how Shinso’s Quirk works minutes ago, and yet Izuku took none of it to heart. Now, the boy carrying the legacy of the Symbol of Peace stands blank eyed and motionless. 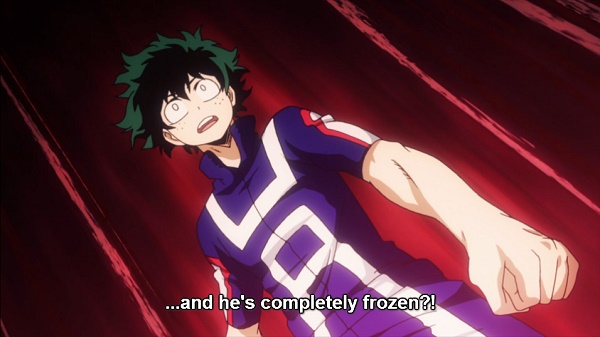