A new intro! A new arc! My Hero Academia returns, putting the Sports Festival in the rear view and speeding into a brief internships with Professional Heroes! Scattered to all corners of Japan, the students from UA High are all set up to learn new things about their strengths and limitations. This show keeps telling me it’s about Deku, Izuku Midoriya (Daiki Yamashita), becoming the world’s greatest Hero, so we may as well start with him. What further lessons can microwaved food impart on our young protagonist?

Returning to the post-credits shocker from the last episode, Izuku enters a dumpy building to find what appears to be a tiny old man, lying disemboweled on the ground. But, he isn’t dead; he’s alive! The old man, a Hero called Gran Torino (Kenichi Ogata), simply fell on top of his plate of ketchup covered sausages. Things continue on a totally normal trajectory as Izuku tries to introduce himself, but Gran Torino seems only vaguely aware of the circumstances for which he’s volunteered. While Izuku wonders if this doddering tiny man could possibly be the Hero that made All Might flop sweat, the imp sets to digging through his intern’s luggage.

Much like another famous diminutive mentor, Gran Torino rapidly shifts from a playful, oblivious, food obsessed demeanor to that of an all knowing teacher. He sternly tells Izuku to fire off a punch with his Quirk. With All Might’s ever deteriorating health hanging over him, this all feels like a ridiculous waste of time to Izuku. As he turns tail to leave, Gran Torino leaps from wall to wall, finally perching above the doorway. For the moment, the goofs are swept aside as the wisened teacher explains what he saw on TV at the Sports Festival: an unthinkably reckless use of One For All. For all he’s accomplished as a Hero, All Might is still lacking something as a teacher. 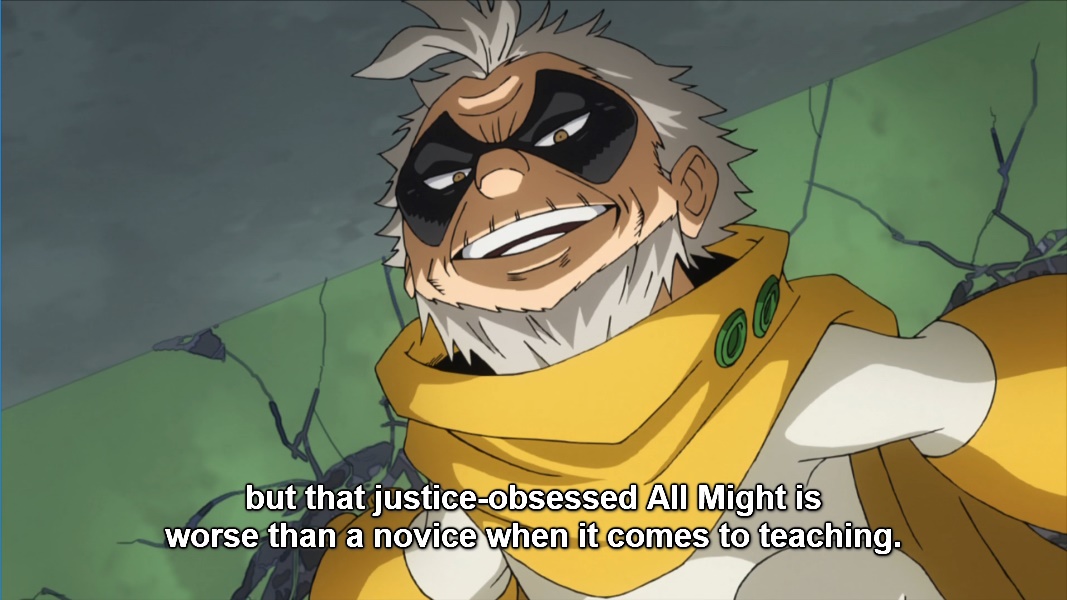 Recognizing Gran Torino’s playful actions and turns of phrase as the blueprint for All Might’s teaching methods, Izuku is instantly won over. Suited up in his freshly redesigned costume, he sets to trying to punch this little old man. Gran Torino isn’t so easily punched, though, as he leaps from wall to wall, corner to corner, microwave to ceiling. Izuku knows he isn’t fast enough to simply catch his tiny teacher, so he’ll have to figure out the pattern and predict where Gran Torino will be. As his new mentor passes behind his back, Izuku spins around having correctly guessed at an opening, but he’s still too slow. Gran Torino easily dodges the punch.

Unlike his prior trials, hard work and clever tricks won’t solve Izuku’s problem. As Gran Torino sees it, Izuku’s admiration for All Might and their shared sense of justice are shackles on his potential. The boy is overthinking the nature of his Quirk, and will have to overcome that before he can control it. While his new employer goes grocery shopping, Izuku cleans up and puzzles over the truth of One For All.

Standing before the shattered microwave, he wonders at what makes his movements “stiff,” and what it even means to be “flexible,” all while memories of Bakugo’s (Nobuhiko Okamoto) effortless use of his Quirk race through Izuku’s head. Throwing open his notebook, he speedily jots down a revelation. Until now, he’s only been activating One For All in each specific limb as the situation calls for it, which leads to slower and more limited — “stiff,” if you will — use. While Gran Torino sleeps, Izuku spends an entire night trying to rotate the power of his Quirk from limb to limb until he can scale a building. 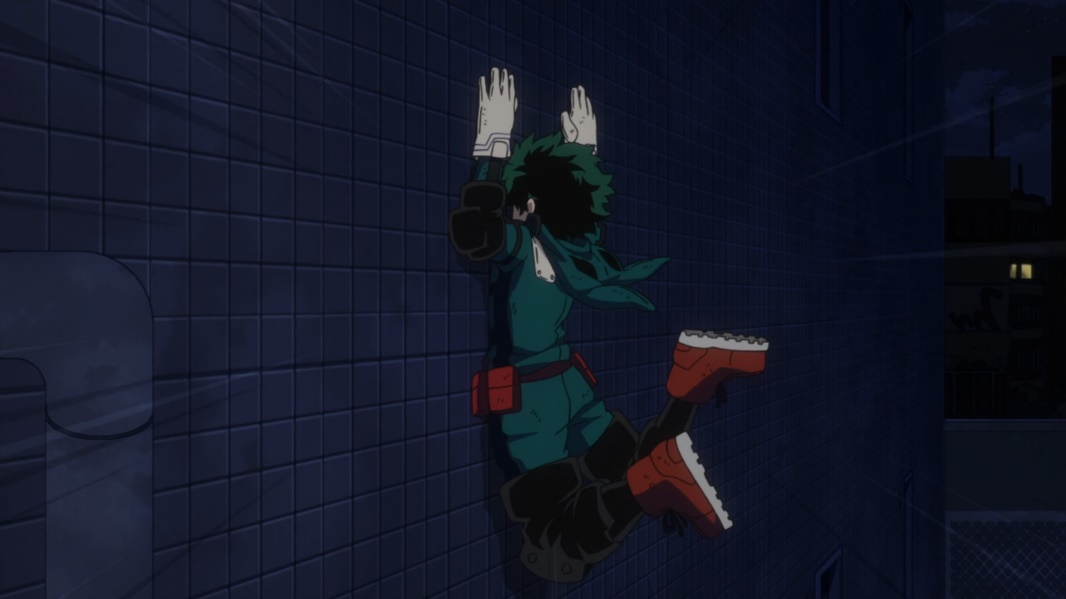 It doesn’t exactly pay off. When Gran Torino greets him in the morning, Izuku is exhausted and battered, having spent most of the night vaulting his face directly into a wall. Gran Torino asks his student to prepare some breakfast — microwaved taiyaki (fish shaped pastries) — because the aged master likes sweets. When the taiyaki come out frozen, a microwave once again serves as key to unlocking Izuku’s understanding of his Quirk. At home, Izuku’s microwave doesn’t rotate the food. He hadn’t noticed that the plate of pastries was too large and should’ve been rotating in Gran Torino’s brand new microwave.

His mistake acts as the perfect metaphor — for Izuku, at least — for how his Quirk should manifest. First, he learned to limit his power by picturing a microwaved egg not exploding, and now he will grasp the heart of One For All by picturing taiyaki rotating as they defrost. While he had been activating his Quirk in this limb or that before, the microwave reveals that he should’ve been activating it throughout his entire body all the time. Though still limiting himself to 5% of its potential, Izuku strains to fire up his Quirk from head to toe. His true understanding of One For All begins here.

Everyone has something to learn during their internship, but we only get brief glimpses. Iida (Kaito Ishikawa), knowingly stoking his desire for vengeance, patrols the city where his brother was attacked. Todoroki (Yuki Kaji), curiously, signed up with his father’s agency. Uraraka (Ayane Sakura) might be developing a crush on her employer, Gunhead (Kouji Okino). Mineta (Ryo Hirohashi), having signed up with Mt. Lady (Kaori Nazuka) because he’s a pervert, is tasked with vacuuming her apartment. And arrogant, foolish Bakugo may have met his match working for Best Jeanist (Hikaru Midorikawa). 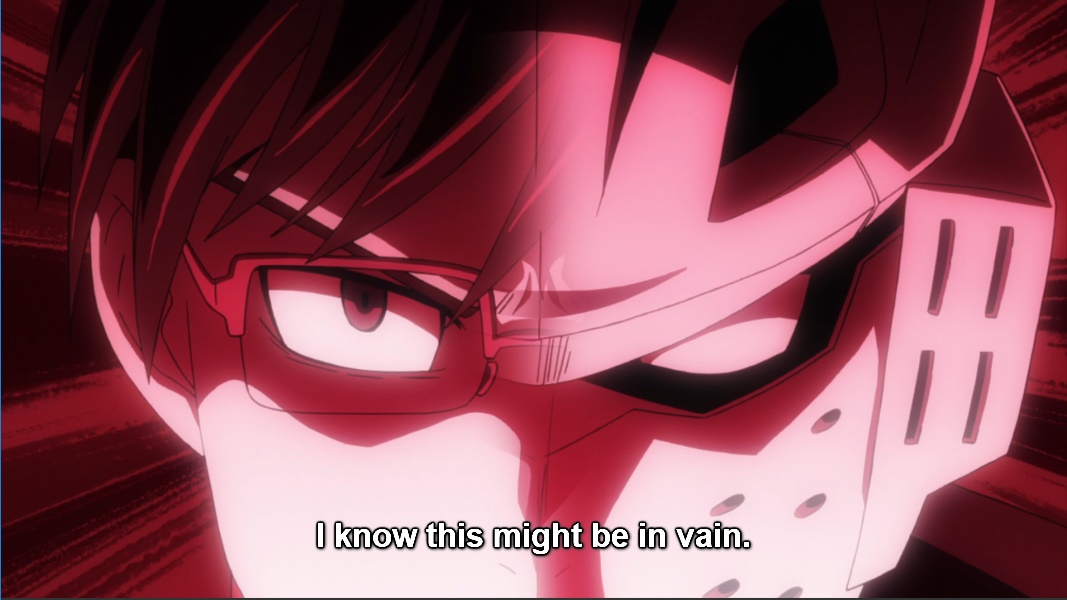 The #4 ranked Professional Hero, and 8 time winner of the “Best Jeanist” award, knows that Bakugo only signed up with him to vault off of a famous Hero’s notoriety. As ever, Bakugo fumes and rages, angrily desperate for respect, but Best Jeanist isn’t having any of it. He’s seen clearly through Bakugo’s vanity, and is concerned that this powerful youth’s insecurity could be the difference between future heroism, and impending villainy. Constraining his young charge’s fury in denim, Best Jeanist is going to show Bakugo what lies at the heart of heroism. 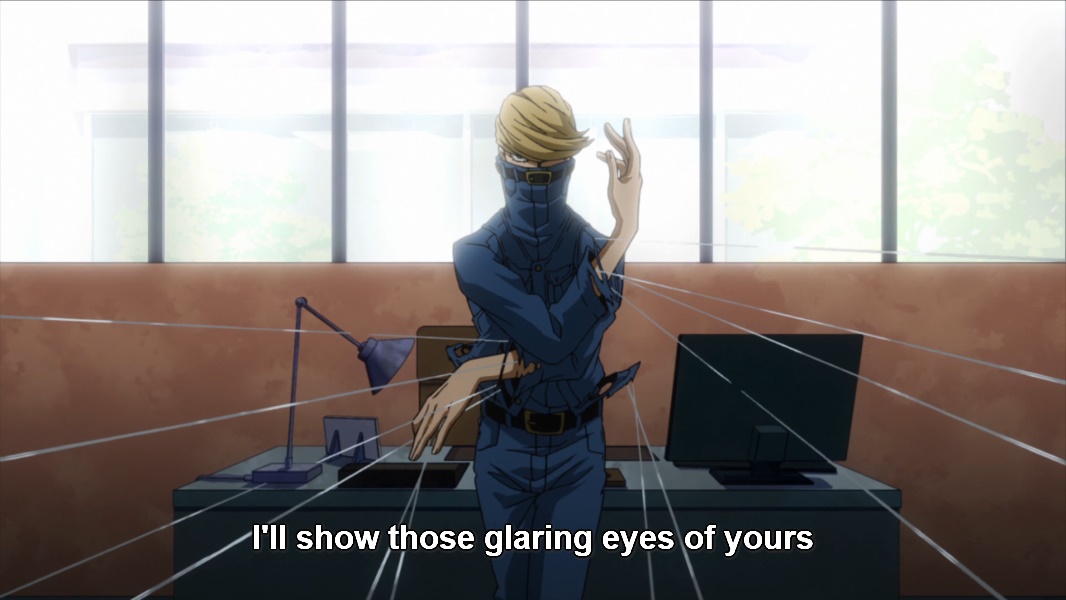 “Heroes and villains are two sides of the same coin.”

At the mysterious little bar tended by the living warp-gate, Kurogiri (Takahiro Fujiwara), and “Handman” Tomura Shigaraki (Koki Uchiyama) meet with the Hero Killer: Stain (Go Inoue) to discuss who gets to teach classes in villainy. A mysterious voice on the TV listens in as Stain and Handman push each other’s buttons. The Hero Killer acts like he has some sort of strict code determining who he kills, and Shigaraki’s single minded hate for All Might somehow doesn’t pass muster. As tensions rise, the voice on the TV eggs Shigaraki on, saying it will be a learning experience for the hand covered creep, but something in his voice suggests Stain will be the one getting taught. Directly paralleling Izuku’s lesson, Shigaraki has something to learn that can only be taught through self examination. 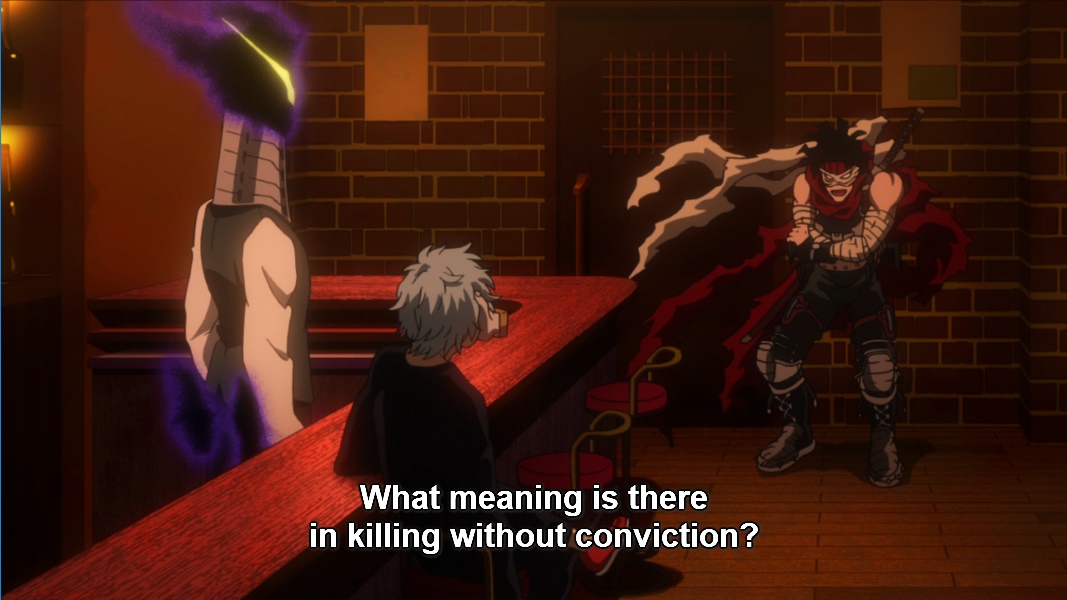 Next Week! Izuku’s training with Gran Torino will progress, while Shigaraki’s Quirk impresses Stain. As the League of Villains train their aim back on the kids of UA, Iida’s search for revenge leads him into their crosshairs.