Fighting tournaments have the potential to lend some key elements to an action series; most obviously, they’re an easy excuse for battles between interesting match-ups. Beyond the fighting, they’re an opportunity for less prominent characters to reveal their motivations and capabilities. For the most part, the UA Sports Festival has delivered these morsels, and continues to deliver. This week — in between the Izuku (Daiki Yamashita) and Todoroki’s (Yuki Kaji) focal bouts, and Bakugo (Nobuhiko Okamoto) and Ochaco’s (Ayane Sakura) imminent clash — the kids who are bound to be less plot relevant get a chance to shine.

The first match is between Class B’s Ibara Shiozaki (Miho Masaka) and the UA Hero Course’s own Denki Kaminari (Tasuku Hatanaka). While Denki has had many opportunities to show off the immense power (and drawback) of his high voltage Quirk, he has never show himself to be much of a tactician. He rushes in with little regard for the capabilities of his opponent, immediately unleashing his strongest electric shock. It’s a foolish gamble, given that his most powerful electric attacks temporarily fry his own brain, and he has no clue how effective electricity will be against Ibara.

The answer is, “not at all effective.” Ibara immediately negates the electric barrage, planting a huge mass of the vines growing from her head, blocking Denki’s current. Her vines then burrow under the ring, sprouting under Denki and entangling him. Between the strength of the vines’ grip and his self inflicted clueless state, Denki’s down for the count. Finally, a student from the Hero Course has fallen to a student from Class B. 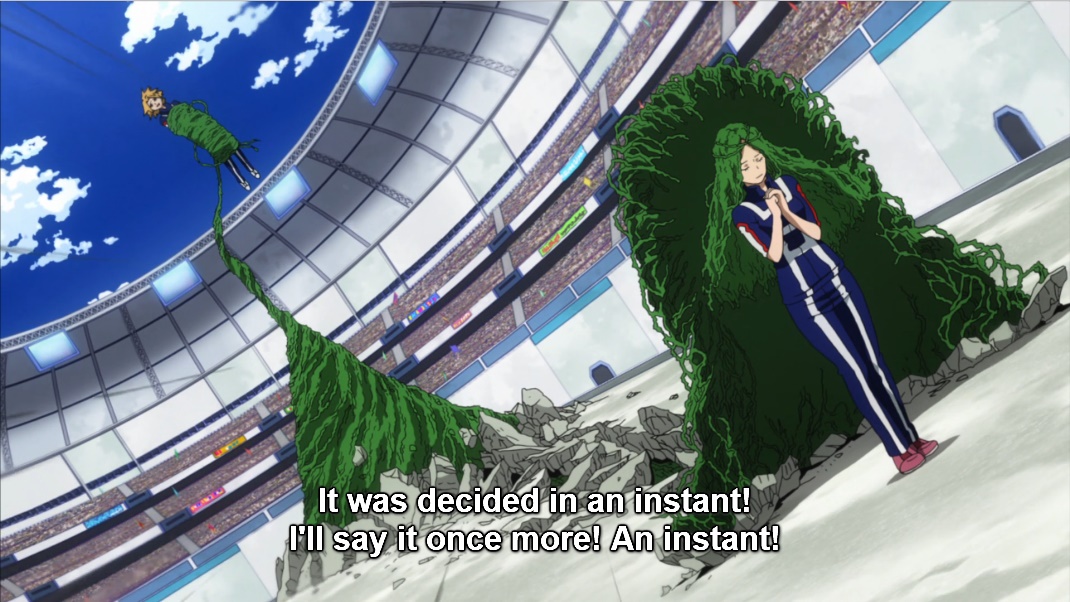 Neito Monoma (Kohei Amasaki), Class B’s master tactician in the Cavalry Battle, could not be more pleased. Ditching his unassuming mastermind persona, he peaks over the divider between Class A and B’s stadium seats, and gloats. It’s only a single victory for Class B, but that’s more than enough to sustain his belief that the Hero Course is full of undeserving frauds.

Class rivalries are put on hold for a match that displays a curious level of cooperation. Facing off against Support Student Mei Hatsume (Azu Sakura), Tenya Iida (Kaito Ishikawa) enters the ring wearing an unfamiliar contraption. As the battle begins, so does Mei’s infomercial-quality hard sell of her many gadgets — including the one worn by Iida. As Iida charges at the crafty inventor, mechanical stilts sprout from her backpack, vaulting her to safety as she extols their virtues over her loudspeakers. Iida can barely redirect his momentum as he tries to reel around toward his springy adversary, and that’s when his backpack kicks in. Equipped with stabilizing jets, the contraption will automatically anticipate its wearers movements, preventing them from falling. 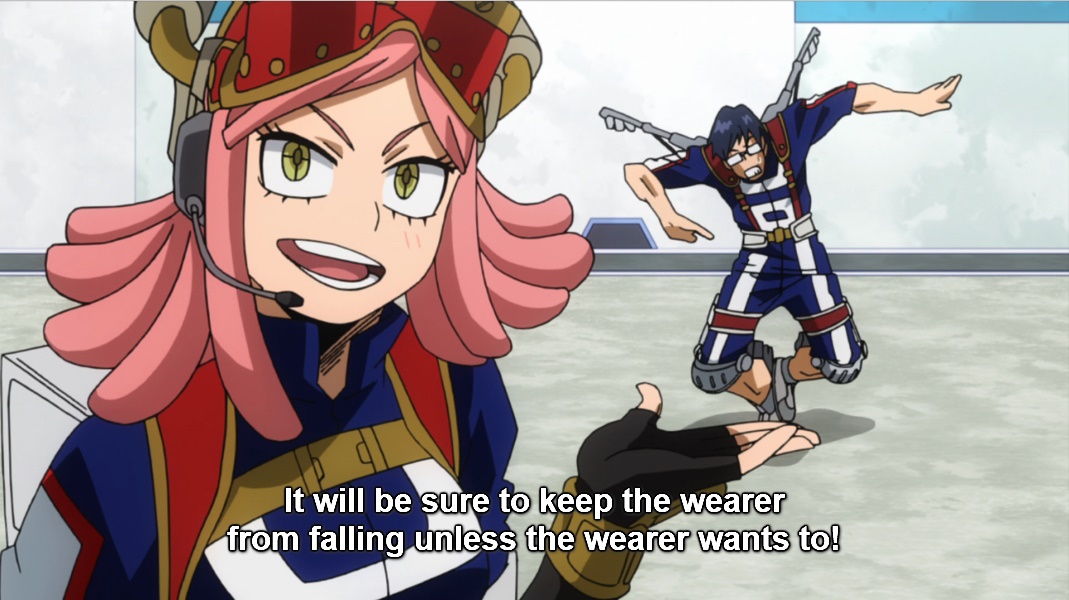 After showing off her wares and successfully drawing the attention of the Hero gear manufacturers in the audience, Mei casually walks out of the ring, ceding the victory to a soundly defeated Iida. Though her creations — her “babies” — could take her far in this tournament, getting all those eyes on them and giving her sales pitch was all Mei wanted. She’ll leave the battle and brutality of the later rounds to Iida.

The third match for this week is between two of my favorite characters, Mina Ashido (Eri Kitamura) and Yuga Aoyama (Kosuke Kuwano). While Yuga is, as ever, supremely confident in the power of the laser blasting from his belly button, Mina has observed his tricks and learned his weakness. Gliding around on acid secreted from her feet, leaping and twirling like a figure skater, the vaguely bug-like Mina dodges Yuga’s shots. She recalls their class’ physical tests at the beginning of the school year, when Yuga proudly revealed that he gets a stomach ache after using his Quirk for more than a minute. Agilely going unscathed, Mina runs out that clock, waiting for Yuga’s tummy to rumble and give her an opening. When it does, she moves in and ends the battle with a single devastating uppercut. 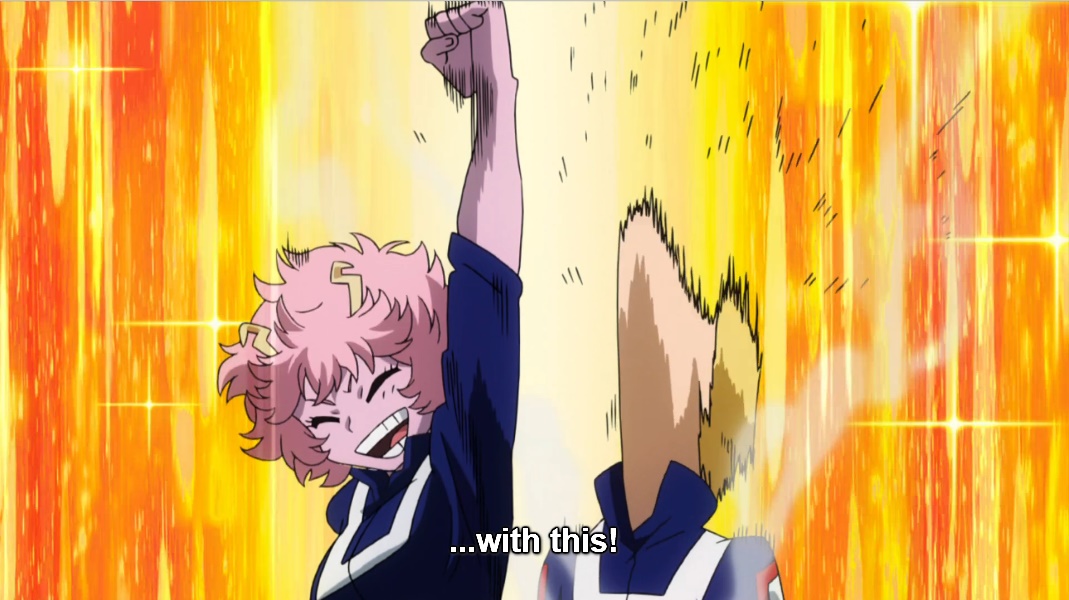 Next, the class rivalry continues focusing inward, not just between Hero Course students, but between students who were recruited by UA. Momo Yaoyorozu (Marina Inoue) is pitted against classmate Fumikage Tokoyami (Yoshimasa Hosoya). From the start, Momo is uneasy about her chances. Fumikage’s Quirk, Dark Shadow, provides ample offense and defense simultaneously. Conceiving of a counter to Dark Shadow is a grand enough task, but figuring it out and putting it in to practice in the moments before the match starts is too much, even for Momo’s strategically adept mind.

Her Quirk, Creation, can generate any familiar matter from within her body. The trouble here is deciding what object will help her against Tokoyami and, more importantly, having the time to create it. Larger, more complex materials take more time to create, and Tokoyami’s Dark Shadow affords Momo none. As soon as the match starts, the shadowy bird spirit bursts from Tokoyami’s chest, pushing Momo closer and closer to the ring’s edge. She generates shields from her arms to block the assault, but it’s not enough to counteract the constant pressure, let alone to open an opportunity for a counterattack. She strikes a final defensive pose and, without realizing, plants a foot out of bounds.

Finally, two hard boys face off. Constantly stymied by redundancy, Eijiro Kirishima (Toshiki Masuda) and Tetsutetsu Tetsutetsu (Koji Okino) are set to demonstrate the clash between a rock and a hard place. Eijiro’s Quirk, Hardening, appears to be only superficially different from Tetsutetsu’s: Steel. After getting essentially identical introductions, they both transform their bodies into durable substances and set to whaling on each other’s faces. In the audience, Izuku’s focus on note taking is broken when he notices an absence. Seemingly having succumbed to the nerves from her impending battle, Uraraka has vanished from her seat.

Ochaco Uraraka sits alone in the locker room, psyching herself up for a most unfortunate standoff. After Eijiro and Tetsutetsu knock each other unconscious (which is literally what they do), she’ll go toe to toe with Katsuki Bakugo. Uraraka’s Zero Gravity Quirk is amazing and offers varied creative applications, but anyone would be nervous facing Bakugo’s explosive palms and ceaseless rage. Izuku and Iida burst in, hoping to help her prepare with encouragement and Izuku’s copious notes on Bakugo’s abilities.

Uraraka isn’t looking to be coddled, though. Throughout the Sports Festival, she’s watched her classmates give their all. While she initially thought it would be nice to take the most comfortable path by teaming up with her friends, Iida’s resolve to challenge Izuku woke her up to a new possibility. She’s going to go out there and do her best, and she’s going to do it on her own. Before the Sports Festival, we got a glimpse of the depth of Uraraka’s ambition when she got pumped up thinking about saving her family’s business. 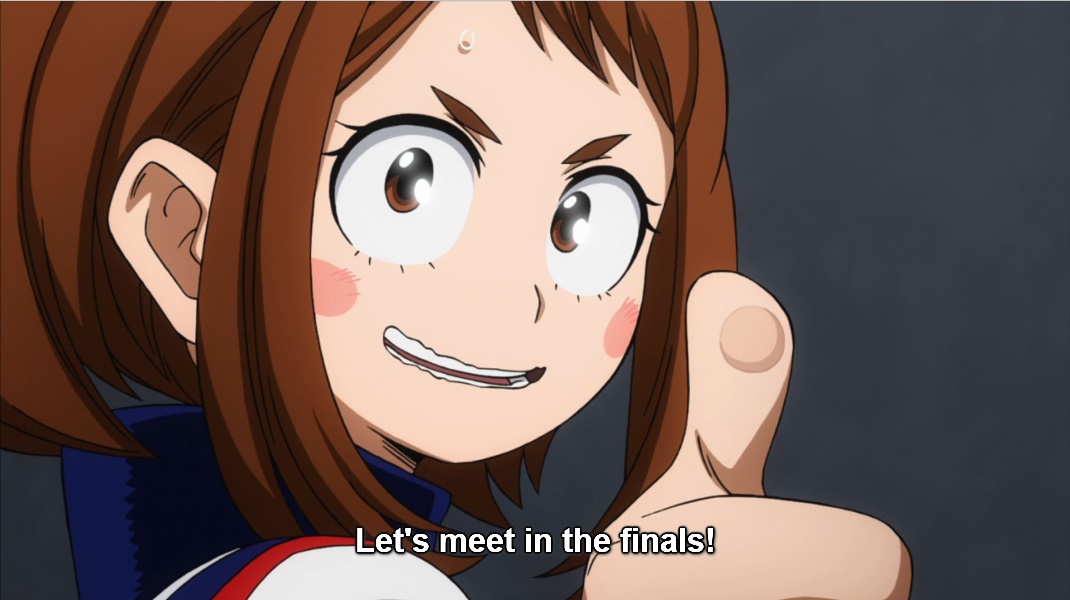 Now, as Ochaco steps into the ring, she’s looking to prove more than that she’d be an employee worthy of a good salary. She’s a Hero from UA’s Class A, and she’s going to show why.

Earlier, I was disappointed that more wasn’t done with Hanta Sero’s (Kiyotaka Furushima) battle with Todoroki. Typically, a fighting tournament is a great chance for an underdog to show their unexpected worth, or a neat hidden trick, before ultimately losing to a character that dominates the plot. Instead, his brief appearance served as a stage to show Todoroki’s emotional state. Perhaps we’ll get more from Uraraka, though. Facing Bakugo, she’s also an underdog, but she’s far more plot relevant than Sero. Plus, the first round of the fighting tournament is wrapping up, so it would make sense to dedicate more thought and time to this fight.

Uraraka threw a baseball into infinity. The school’s motto is “Go Beyond, Plus Ultra!” I can’t think of anything further beyond infinity.