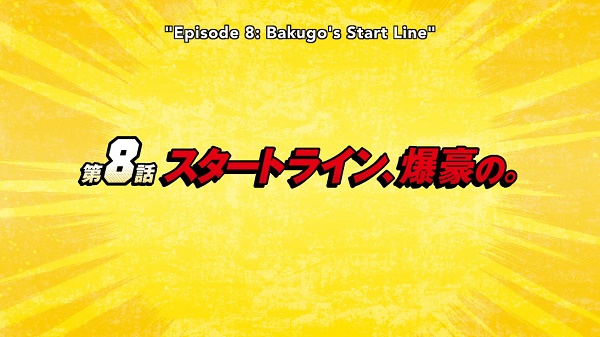 With a risky plan, Uraraka and Izuku barely pull out a victory over Bakugo and Iida. Uraraka recovers from her power-induced nausea while Izuku is carted off to the nurse’s office on a stretcher; both arms severely injured. Katsuki Bakugo is stunned in to silence. Before sending out the next groups, everyone returns to the control center to review the results and learn some hard basics for indoors team heroics. 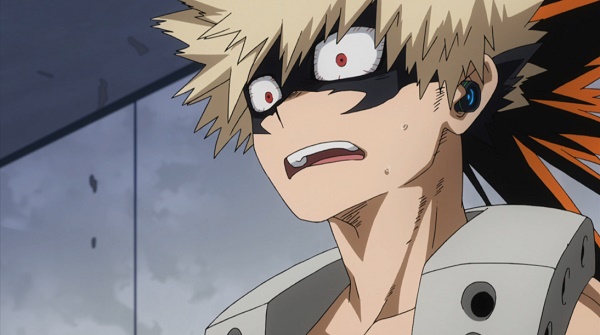 Momo Yaoyorozu, one of four students recruited without having to take the entrance exam, succinctly breaks down all of the mistakes Bakugo, Izuku and Uraraka made, while explaining how Iida was the only person taking the test seriously. Beyond Bakugo’s obvious single minded recklessness, these three students acted without giving proper consideration to the danger presented by the bomb. Iida, however, was committed to protecting the bomb, and may have been more successful had he disregarded its fictive volatility. Momo even goes so far as to equate the other students’ actions to cheating, for how little they acknowledged the purpose of the test.

Iida swells with pride. Bakugo fumes. Though his anger is burning as hot as ever, it’s finally aiming inward. The assault on Bakugo’s ego doesn’t end with the brutal assessment of his mistakes. With an example to build on, the other students are split in to pairs and sent in to an undamaged building to square off. Though many take this time to shine, none will weigh on Bakugo as heavily as the first group to follow him. 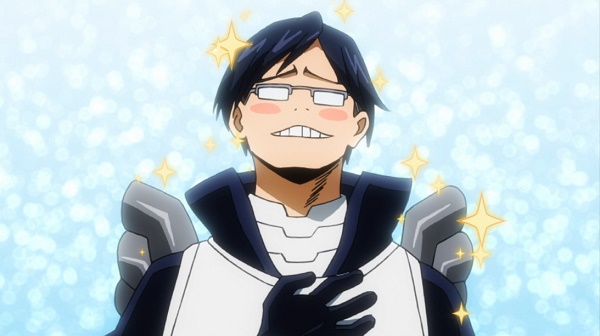 As a boy with a tale and an invisible girl prepare to defend their fake bomb, the hero duo tasked with stopping them enters the building. The larger of the heroes has an odd Quirk that allows him to replicate body parts. He sprouts extra ears from the ends of extra arms and quickly pinpoints their opponents’ location. For his partner, Shoto Todoroki, such details are an afterthought. The boy, perpetually half encased in ice, touches a hand to the wall and within seconds coats every surface in the building with ice. He casually strolls to the bomb, warning its guardians that breaking free of the ice will strip the skin from their feet. Todoroki places a hand on the bomb, and as quickly as it froze, the ice melts.

At the end of the day, Izuku wakes in the nurse’s office, still recovering from his injuries, and returns to the classroom. There, a handful of students hang around going over the day’s events. Given Bakugo’s reputation, everyone is very impressed with Izuku’s performance, regardless of his groups’ poor review. The adulation is nice, but there’s a weight pressing on both stewards of All For One. Izuku and All Might are both concerned about the possible fallout should Bakugo crumble after failing. Noticing his rival’s absence, Izuku rushes out to catch up with him. 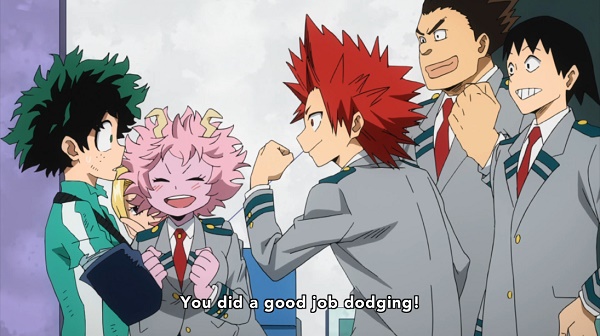 Being self centered has always been Bakugo’s greatest flaw. For a change, Izuku borrows that flaw as he rushes to stop his tormentor at the school gates. Izuku doesn’t want Bakugo to think the powerful Quirk that beat him has been a lifelong secret. Though he keeps All Might’s name out of it, Izuku reveals that his Quirk was given to him by someone else, and he still has limited control. Then, he vows to make this power his own, and to confidently defeat Bakugo with it.

Before Izuku can take back his explanation-turned-challenge, Bakugo lashes out by lashing inward. He doesn’t believe Izuku got a Quirk from someone else. That isn’t possible, and even if it was, it doesn’t matter. Izuku bested him in the test, and probably could have done much worse, and that was only the start. Todoroki’s ice powers were overwhelming. Watching his performance, Bakugo could only think, “I can’t beat him.” He came to UA full of his own hot air, built up on the a life’s worth of esteem and the highest score in the entrance exam. He wasn’t expecting to meet a group of students who were so innately gifted that they didn’t even need to take the test. That was as great a surprise as his favorite victim suddenly manifesting a power far greater than his own.

Bakugo doesn’t need Izuku’s explanation, but he is totally here for his challenge. Failure– not just easily excused failure, but crushing absolute failure– finally gave Bakugo the perspective he sorely needed. He isn’t on a pedestal. He isn’t at the top of the class. But, now, he has the drive to earn what he’s always believed he deserves. Uraraka and friends watch from a distance, and she asserts this is definitely “a fated battle between men.” 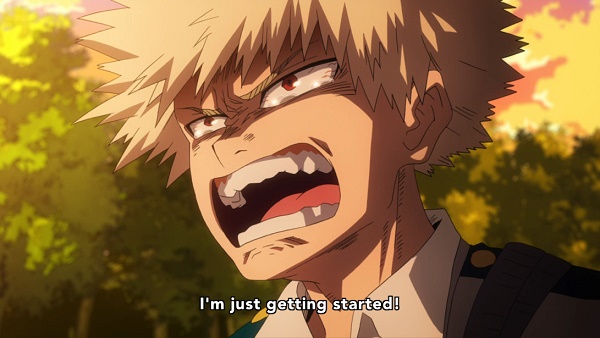