Here’s Everything You Need to Know About POWERLESS Before Debut 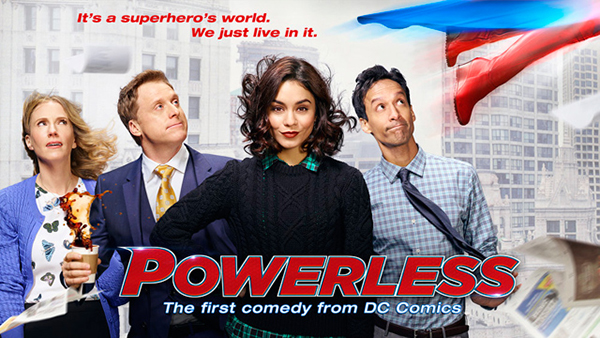 Powerless is a workspace comedy set in a world where superheroes and villains exist in everyday life. The sitcom focuses on the everyday people that have to deal with the after affects of the super battles and mayham that come with it. Set in the DC Universe, we’re already guaranteed appearances of characters we know and maybe don’t know! Here’s some things we do know for certain about this series.

Don’t know where that is? That’s okay, because it’s a brand new city added to the DC list made for this show. Places like Gotham, Metropolis, Star City and more now have another city to be beaten to a pulp by super powered beings.

2 – Wayne Security; They work on tech to keep you safe

As this is a workplace comedy, the workplace itself is Wayne Security. A subset of Wayne Enterprises and newly run by Bruce Wayne‘s cousin Van Wayne. Guess what folks? Van Wayne is canon! He made his first appearance in Batman Vol#1. Van Wayne is played by Alan Tudyk who seems to be goofy and under-qualified to be running the division. Speaking of underqualified…

3 – Emily Locke is our protagonist

Played by Vanessa Hudgens, the series starts on Emily’s first day at her first job ever – as the Director of Research & Development for Wayne Security. Now I may be a stickler for saying this, but really? Your first job ever is the Director of an R&D department? I digress. She’s an excitable girl who’s never experienced the world with superbeings running around all the time. She’ll be joining her team to try to make the world a safer place for those who are powerless. (Yes I went there.)

4 – Her team isn’t as excitable

Emily is joined by Danny Pudi playing Teddy, a chief officer at the business who helps create the tech. Christina Kirk is playing Jackie, Van Wayne’s personal assistant who loved superheroes but has had her excitement for them beaten down. Ron Funches plays Ron, an excited tech who tries his best to create tech to help keep people safe, though mostly creates duds. You can see an ad for one of their products below. The show won’t always focus on the products though. They will dive in with their interpersonal stories and focus on the people.

5 – We will see characters from the DC Universe

Already for certain, we will see Crimson Fox in the first episode of the series. Another promise in the trailer is classic villain Starro. It’s almost guaranteed we’ll have heroes and villains and characters from the DC Universe in this show. How many has yet to be seen as the show is focusing on the people themselves, not the heroes. While we’re certain they won’t use the big guns like Batman or Superman, they will be able to say these characters names! Definitely have Batman ties. More then likely C or D list characters will make it on the show itself.

6 – The show was originally set in an insurance office

It appears insurance is boring no matter what. The original premise was to be set in an insurance agency as they helped take claims for damage related to super-being matters. It was also unrelated to the Wayne company. But it appears now they’ll have more fun in Wayne Tech. Cause who doesn’t love Wayne Tech?!

Will you be checking out Powerless when it debuts tomorrow? You’re prepared for it now!