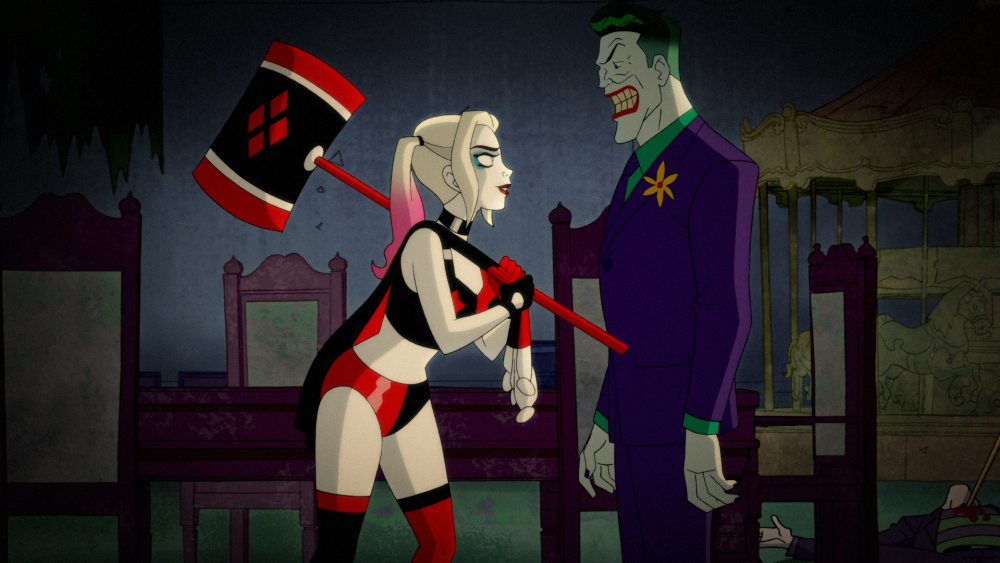 When DC first announced an adult oriented animated series focusing on Harley Quinn was in development for their streaming app DC Universe, I was extremely excited and couldn’t wait to get my hands on some footage.

Upon seeing Harley, voiced by Kaley Cuoco who does a respectable job, in her cell with Ivy, voiced in brilliant deadpan by Lake Bell, the tone and language were something fans could easily get behind. In addition to these two the show is led by an all-star voice cast including Alan Tudyk, Diedrich Bader, Jim Rash, Ron Funches, Tony Hale, Chris Meloni, J.B. Smoove, Jason Alexander, Giancarlo Esposito, Wanda Sykes and many more!

Harley Quinn’s first foray in the DC Universe was her creation by Paul Dini and Bruce Timm for Batman: The Animated Series in 1992. Sidekick to Joker and foil of Batman she eventually made her way into the main DC continuity during the No Mans Land storyline. Now with her own R rated animated show as well as Margot Robbie’s portrayal, Harley is set to explode like never before. Spoilers incoming for episode 1!

The episode begins on a yacht with a bunch of rich people toasting each other for screwing over the poor people and making a pile of money. The show establishes itself with the curse words in the opening statement by dropping an F bomb only to have Harley flip into view and call everyone a POS. She makes a claim to the money but everyone just laughs and tells her in a mocking tone that they won’t be afraid of the Jokers girlfriend. Harley promptly shatters his leg at the knee and the animation shows off its gory side in graphic detail. It’s awesome!

The goons tell Harley that she made a mistake in coming alone to which the captain of the ship promptly pulls off his face to reveal Joker (Tudyk). Joker cut off his face and wore it like a mask then made it speak like a puppet, this show is going hard on the gore but it fits well! After Harley and Joker argue about the timing of his intrusion while also killing the goons the two are confronted by Batman (Bader), and Joker uses Harley as a decoy to escape while promising to break her out of Arkham before breakfast.

Batman and Harley meet Commissioner James Gordon (Meloni) who is portrayed as a sleep deprived manic cop and he proceeds to question her as to Joker’s whereabouts. Since Harley gives up nothing she ends up in Arkham where she hangs out with Poison Ivy (Bell). Three months later Harley is still in Arkham as Ivy is trying to convince her to get over Joker. Riddler (Rash) joins Ivy in telling Harley that Joker isn’t coming for her and she needs to realize it.

Later Ivy launches a breakout attempt from Arkham, Thanks to Riddler pooping out an orange seed for her to use her powers. Harley wants to stay and wait for Joker, but it’s already been a year since she’s been in there and Ivy knocks her out. Harley wakes up later in Ivy’s hideout and meets Frank (Smoove), a plant straight out of Little Shop of Horrors. Harley still worries about Joker and figures something must have happened to him since he didn’t rescue her.

Ivy uses her plants to encase Harley to force her to listen to reason. Asking if Harley remembers diagnosing her, Harley responds ” A classic misanthrope with abandonment issues who befriends plants to avoid human intimacy.” Ivy tells Harley that she helped her and was the only doctor who ever got through to her, and wonders what she would say to herself, showing her a picture of Harleen.

The picture starts speaking to her asking for help with a patient. Harleen then describes Harley’s relationship with Joker to which Harley diagnosis the subject with “Classic abusive codependency, you just gotta show her there’s not future with him and she needs to end it and find her own identity and.. ohhhh I see. You’re smart” realizing that she is in fact the subject.

Harley then breaks up with Joker and he gives a rambling defense of his previous actions that she believes but Ivy doesn’t buy and she tries to get Harley to leave. She doesn’t and the two make up in a very gross way. Later Harley decides to take Riddler down for her puddin but Batman arrives at the same time and the two are captured. Riddler has both of them above a pool of acid and calls Joker to come over and chose who lives and who dies. Joker tells Harley that he couldn’t let Riddler get credit for killing Batman and chooses to save him and kill her.

Harley falls into the acid only to have a vision of past events showing her Joker’s true nature, he only loves Batman. Ivy pulls her out and reveals that she was only submerged in Margarita mix and that she had set everything up in order to show her that Joker is no good for her.

Ivy convinces her to become her own person complete with a costume change and Harley goes to Jokers hideout were his goons proceed to try and kill her at his command. After defeating them she proceeds to tell Joker that she wants him alive to see her “runnin this town.”

In my opinion this was a fantastic introductory episode into the new R rated adult Harley Quinn universe. The cast feels perfect and I cant wait to see what comes next.