GXAus: GGA Plays KEEP IT TOGETHER

As you approach the booth for Keep It Together the first thing you see are colourfully simplistic faces that adorn the walls. A young man smiles and and beckons people to a couple of computers where his game is available for play. The bright colours are entrancing and you can’t help but give the game a try. 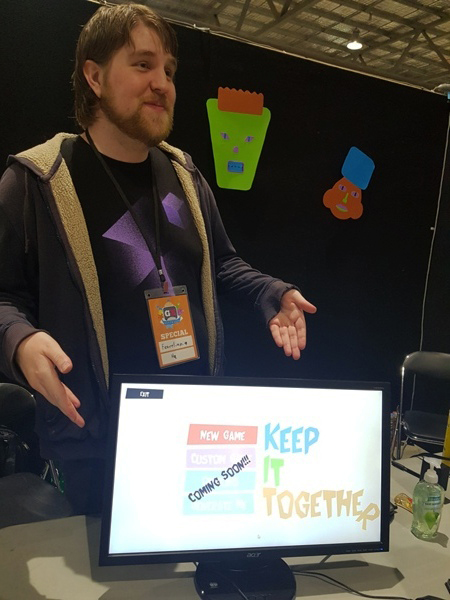 Pressing New Game brings up a stylized face asking you a question; something simple that someone may ask you in real life, and presents you with a few answers. Immediately the sinister nature of the game reveals itself. This is a game about social interaction and how stressful it can me. Give an answer the person doesn’t want and you become stressed. Get too stressed and you need to hold down a keyboard key for the remainder of the game to prevent you from losing. Within minutes both hands are spread awkwardly across the keyboard in an attempt to hold together long enough for one more talking point. 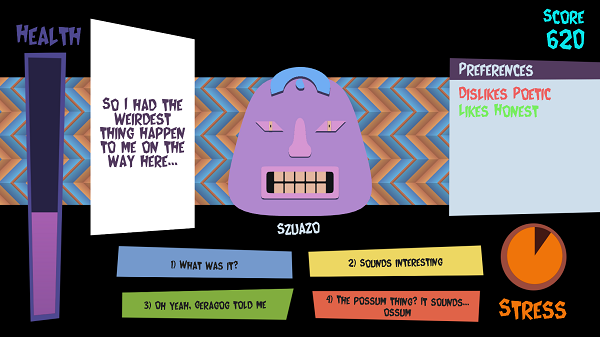 This is anxiety in physical form. And it’s a crazy amount of fun to play.

After losing in a spectacular fashion – holding down so many keys I almost broke a finger – I got to interview the creator of Keep It Together.

Jamie: Introduce yourself and the name of your game.

Fen: I am Fenreliania, you can call me Fen. And my game is called Keep It Together

Jamie: In 13 words or less, what’s your game about?

Fen: A coat full of rats and social anxiety trying to be human.

Jamie: And who is your game targeted at?

Jamie: What was your primary motivation for making the game?

Fen: I had just created a game that expressed one form of my anxiety and I wanted to try and make something that was actually fun about another kind. I was laying in bed, feeling like I was made of writhing rats, trying not to fall apart and it kind of made sense to try to play Twister with a keyboard. I really like the idea of of the game mechanics becoming physical. The difficulty isn’t “Oh there’s a lot of keys.” but “I physically can’t hold these down”.

Jamie: Like with the Spoon Theory? “I only have this much I can give.”

Fen: Yeah, I really wanted to translate it as directly recognizable. My fingers can’t go anywhere else, I can’t handle much more of this. 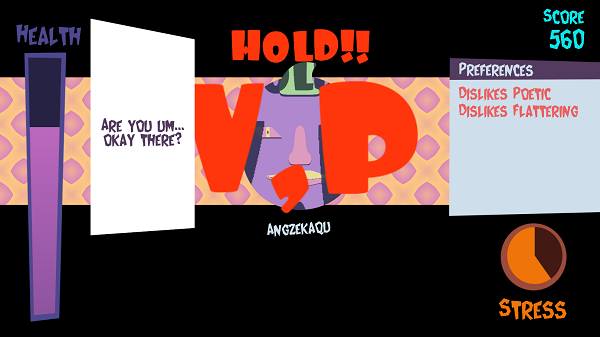 Jamie: I don’t have anything left to give. And that people are terrible.

Jamie: What’s something important you’ve learned while making this?

Fen: I’ve learned how to use code routines properly in Unity. ~laughs~ No, it feels kind of self indulgent to say but I’ve learned that my games are good. That people like my games. Cause I had made a game before this that I showed off to people and they were all “Oh this is cool, this is interesting.” and I did not believe them. And to this day anyone who tells me it’s good, I feel guilty about that game. But this, I put effort in, it looks nice and it runs nice, and it still surprises me that people like it but I don’t feel guilty about it. It’s really encouraging that I can make a game that people like and it’s not a traditional kind of game.

Jamie: You’ve learned that you can succeed.

Jamie: That’s great to hear. If resources weren’t an issue what would you do with this game.

Fen: If they weren’t and issue with this game I’d probably get a bunch of other people in to write the questions as it’s a little repetitive at the moment. I might get an artist to make the faces, because they are charming but I’m running out of options.

Jamie: How do you think the gaming industry could encourage more diversity?

Fen: The biggest thing is that studios with money just take a large budget game, a multi million dollar game, and to split it up into $20,000 chunks and give them out to teams of like 4 people, instead of one giant game you get a whole bunch of smaller more interesting games that don’t need as much resources but you go out to local meet-ups and find people who have interesting games and just say “Hey, I’ll help you make this into something full”.

Jamie: How and when do people get hold of Keep It Together?

Fen: The game should be released at the end of June. There’s no concrete date yet but it’ll  definitely be available on itch.io, depending on how the Steam Direct thing goes, it may be available on steam, but it will be up at http://fenreliania.itch.io

Fen: I would love a hug.

Keep It Together is expected to be released in June 2017 on Windows, Mac and Linux. You can keep track of the game’s progress at fenreliania.itch.io/keep-it-together