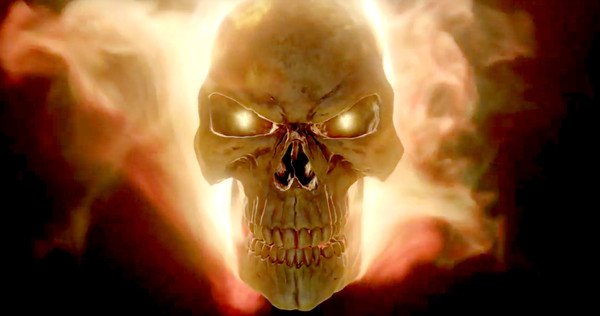 The Ghost Rider will return for the AGENTS OF SHIELD finale.

“I hear you have a robot problem” is a recent tweet sent by Gabriel Luna (True Detective, Wicked City) which caused much stirring about the return of Robbie Reyes a.k.a. the Ghost Rider to Agents of SHIELD. Luna posted confirmation on his Instagram page on Monday.  In the photo, Luna poses with stunt man Eddie Braun (Avengers, Transformers), saying it was hard to keep the secret this long that he is in fact returning.

You guys have no idea how hard it was to keep that a secret for the last few months. 🙂 Now that we all know the GHOST RIDER WILL RETURN in the @agentsofshield Finale, I can post this bad ass picture of me chillin' with THE MAN, THE MYTH, THE LEGEND, Eddie "Snake River" Braun. If you don' know about Eddie, I suggest you YouTube that shizz promptly. #GhostRider 🔥💀🔥

The last time we saw the Ghost Rider, he was saving the world from his uncle Eli Morrow (Jose Zuniga).  Eli was under the spell of the Darkhold.  He was using the Darkhold to try to create matter from nothing. Ghost Rider sacrificed himself in to take out Eli. Both perished in a quantum explosion.  Or did they?   The Ghost Rider is not human, he’s not Inhuman…he’s more like a demon.

Since then, Life Model Decoy Aida (Mallory Jenson) has helped Dr. Holden Radcliffe (John Hannah) create a Framework.  Aida put Coulson (Clark Gregg) , Mace (Jason O’Mara), Mack (Henry Simmons), Fitz (Iain De Caestecker), and May (Ming-Na Wen) inside the Framework and killed Radcliffe.  Now Aida is using the Darkhold technology to make herself into a real girl.  If Aida succeeds, she will kill the captive agents.  Mace is already dead.  Simmons (Elizabeth Henstridge) and Daisy (Chloe Bennett) are doing everything they can to save everyone else, but they are running out of time.

Radcliffe and Aida used the Darkhold to create the Framework.  The quantum explosion was caused by the Darkhold. So it makes sense that Robbie Reyes is able to show up in Aida’s alternate reality.   TV Guide reports that Reyes will show up to help the Agents stop Aida from “inhabiting and ultimately destroying the world.”

The season four finale is scheduled for Tuesday, May 16 and is titled “World’s End.”