DISCLAIMER: Spoilers abound for The Good Place. This is a top 10 episodes list, after all.

Greetings, messy benches! I don’t know about you, but self-isolation has spawned a series of in-depth thoughts regarding trivial subjects such as the art of television. Yes, that sentence is a heaping helping of word salad, but what else can I say? As of this moment, I carry a PhD in Television Arts from the University of Television. Anyway, I’m also feeling nostalgic. What better way to put that reminiscing to good use than by dissecting The Good Place? God, I miss that show. Those were the good ol’ days, folks. When we didn’t have a motherforking global pandemic wrecking havoc.

Below, in no particular order, I’ve listed my personal top 10 episodes of The Good Place. Peruse at your peril.

Now, who could possibly forget this game-changing episode? “Michael’s Gambit” contained perhaps one of the greatest twists of all time. Michael (Ted Danson) deviously revealed that Eleanor (Kristen Bell), Chidi (William Jackson Harper), Tahani (Jameela Jamil) and Jason (Manny Jacinto) were actually in the Bad Place. Oh, and we learned that Michael was a demon, not a Good Place architect. Danson blessed us with a formidable, villainous guffaw that was equally hysterical as it was daunting. This episode was the catalyst for the remainder of The Good Place. It set up a wonderful series’ arc that was rife with more twists and turns than a winding county back road. 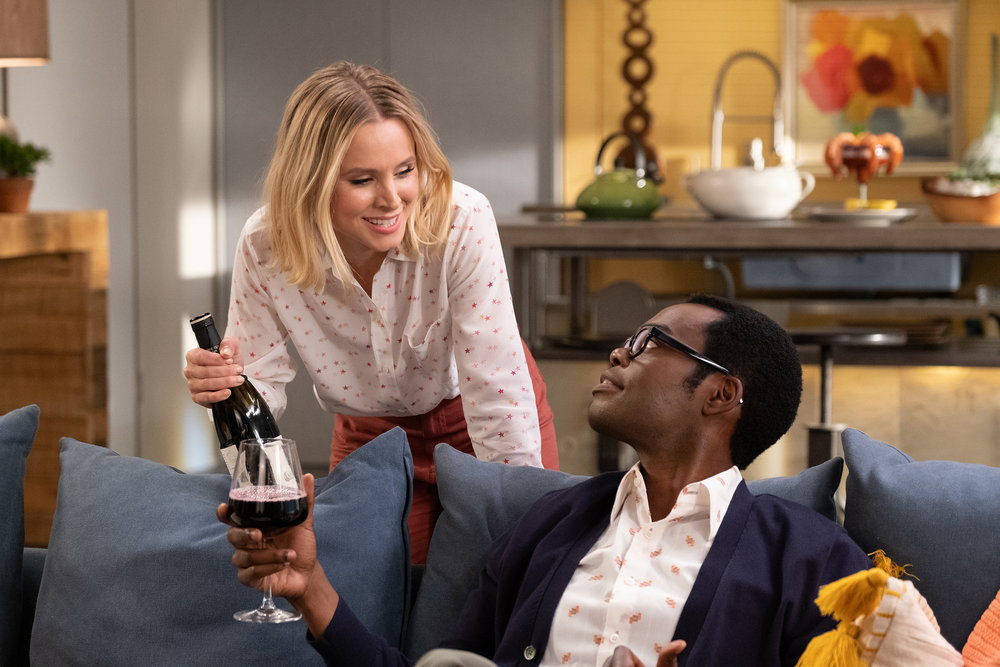 “Whenever You’re Ready” ripped my beating heart from my chest and squeezed it til it exploded. The result? A bloody, macabre display of emotions. Chidi’s metaphor-laden monologue to Eleanor about rippling waves pierced my soul. Not to mention, Michael’s fulfilled wish to live a human life chock full of adventure was equal parts touching and heartbreaking.

The fact that D’Arcy Carden (Janet) didn’t garner an award for this episode boggles my mind. It’s blasphemous, really. Carden played each member of Team Cockroach to perfection, right down to physicality and vocal timbre. In addition, getting to really delve into Janet’s void/disguising the human characters as a Janet was brilliance personified.

Any episode with Mindy St. Claire (Maribeth Monroe) is sure to be a hilarious one. “Dance Dance Resolution” marked the commencement of Chilenor – Chidi and Eleanor’s insatiable love for each other. Michael’s attempts to tweak his elaborate neighborhood torture scheme were continuously comical. Oh, and the Cannon Ball Run II love was the cherry on top.

We’ve got another revelatory episode on our hands, Team Cockroach! This was when Eleanor spilled the beans regarding her status in the Good Place. We met Vicky (Tiya Sircar) as she was pretending to be the “good” Eleanor. Trevor (Adam Scott) sidling in like the motherforking bad boy demon he was. Bad Janet! She was the shirt. All in all, this episode solidified much of the show’s overall mythology, especially our interaction with the Bad Place. 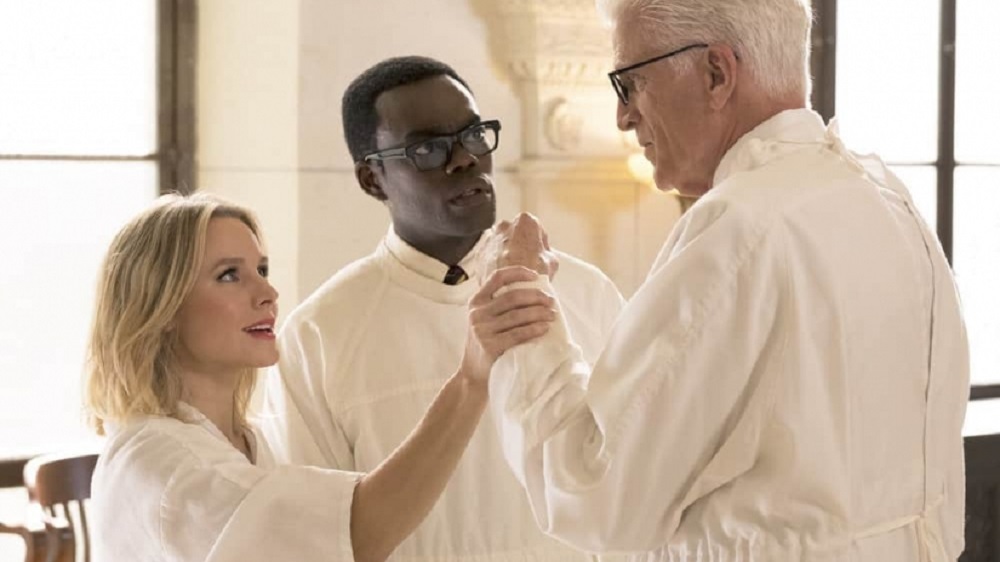 Now, this episode probably lies in my top five. “The Trolley Problem” epitomized the ethical side of The Good Place. Chidi was teaching his ethics class, which included Michael, the whole principle behind the Trolley Problem. If faced with a catastrophic dilemma, do you save one person over multiple people or vice versa? This episode did a fantastic job of breaking the aforementioned down in an easily digestible manner. 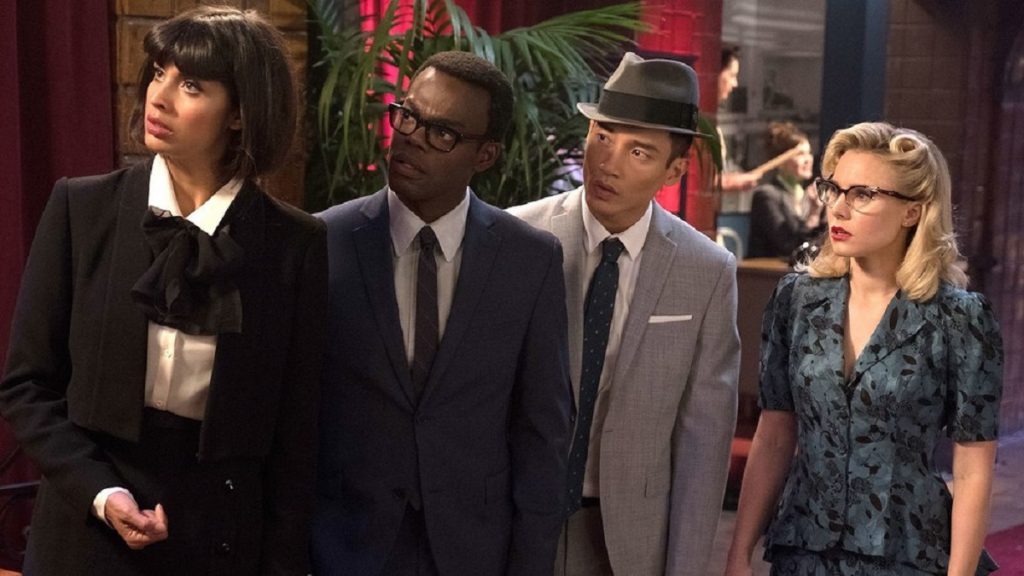 I love me a good heist-like episode! “Rhonda, Diane, Jake, and Trent” signified the Soul Squad’s first trip to the actual Bad Place. In addition, we were blessed with Shawn (Marc Evan Jackson) scenes aplenty. “I was going to go through the proper channels, but then I remembered, I’m a naughty b*tch” made me legitimately cackle. It was the line of dialogue that kindled my love for Shawn. Not to mention, from a writing standpoint, I really dug how the Bad Place resembled an advertising agency office in the 1950s. Can you say Mad Men? I know I can!

This episode was overwhelmingly heart-wrenching. Chidi and Eleanor bidding farewell to each other prior to the former’s mind wipe made me weep. Literally weep. William Jackson Harper and Kristen Bell’s chemistry was off-the-charts. Eleanor snagging the reins as architect felt like a moment the show was steadily building toward, and the result was more than satisfactory. She always possessed an innate quality of leadership that just needed some prodding for it to fully blossom. 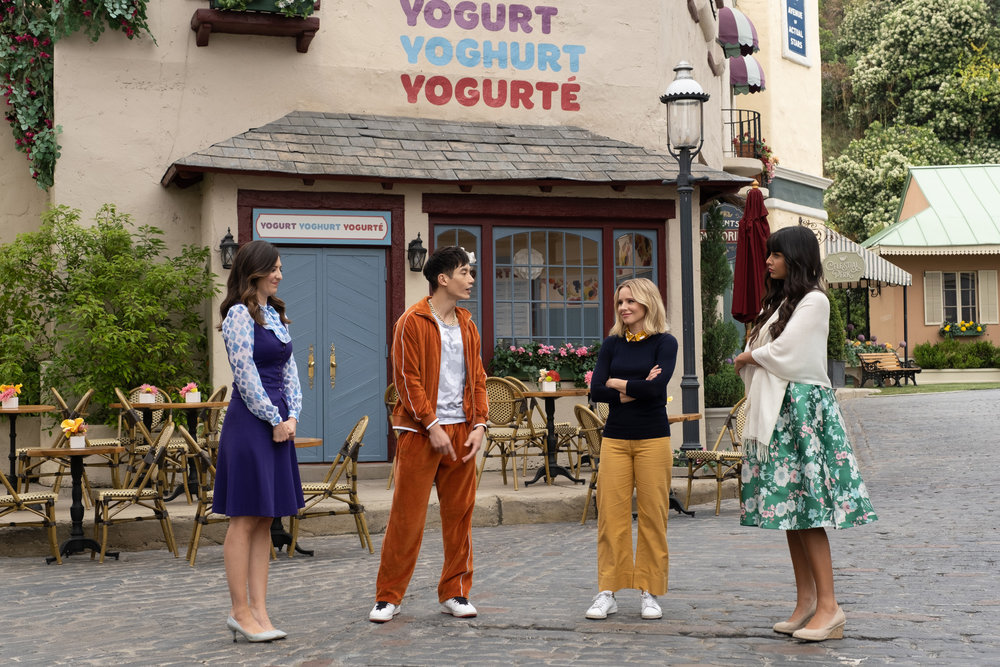 Now, this episode was anxiety-inducing. Awaiting the decision of whether an omnipotent, omniscient being will destroy Earth and all of humanity with it was terrifying. But having Maya Rudolph as the Judge was one of the show’s more prudent choices. Well, having her on a series in any capacity is always a good thing. In addition, our core four humans gave each other elaborate funerals, and the results fit the whimsical tone of The Good Place to perfection.

This episode marked our introduction to Mindy St. Claire, the only person “medium” enough to wind up in the Medium Place. She was neither too good, nor too bad. Thus, Eleanor decided to escape to the Medium Place in the hopes that Shawn wouldn’t find her. Maribeth Monroe knocked it out of the park with her portrayal of the cocaine-addled, 1980s business chic Mindy. Throughout the tenure of the series, we saw the main cast flee to the Medium Place in many an episode.

Well, that’s all I wrote! What are your favorite episodes of The Good Place? Sound off in the comments below!

You can watch the first three seasons of The Good Place on Netflix.