Home » Movies » All the Rest » GGA’s Salute to the Chris’s: CHRIS PRATT

While GGA’s Salute to the Chris’s of Hollywood isn’t meant to be a ranking of the superhero four, I can’t help but say the best was saved for last: Chris Pratt!

Why would I make such an outrageous claim? Well, Chris Pratt has been it all, from loveable oaf to heartthrob. So much so, there is a meme about his career:

Maybe you live under a rock and don’t know Chris Pratt as anything more than Anna Faris‘ goofy husband. He has even been a guest on her podcast and on her television show, Mom. Or, perhaps, you only saw him as Ché in the young adult drama, The OC. If either of these is the case, please, take my hand and come into the light!

Chris Pratt bumbled along and serenaded many women as Andy Dwyer, the clumsy, absent-minded, musician in Parks and Recreation. Over the course of the show, Pratt went from a clueless boyfriend-in-a-band to a well partnered husband. His class-clown antics won over the glower and apathetic April Ludgate (Aubrey Plaza). Men, take note: women really do love a man that can make them laugh! 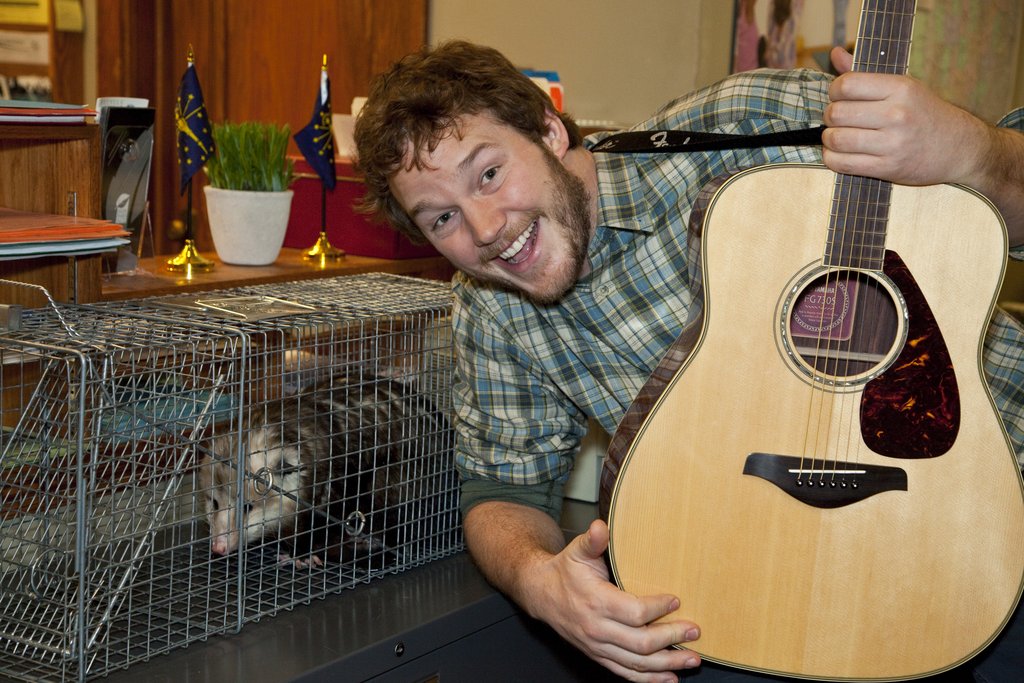 Then came Marvel’s Guardians of the Galaxy, a film that nobody knew what to expect and one that crashed in from far left field with the unlikely superhero team. While Rocket Raccoon (voiced by Bradley Cooper) stole the show for me, Pratt managed to steal my heart. He combined antics that Andy Dwyer might pull with a rogue’s charm and a playboy’s reputation. Peter “Star Lord” Quill gave Pratt a chance to dance through the universe and show off the hard work he put into reworking his body from Guy Next Door to Physically Fit Action Star. Through both the first Guardians and the sequel, Pratt’s humor brought a sense of humanity to their adventure. But he also managed to bring in a blend of naive innocence (he was kidnapped from Earth as a child) and the bad boy attitude (he is an intergalactic thief, raised by the Ravagers).

After tackling the universe, where does an actor go? What more can he do? Well, a lot, actually. Pratt helped revive the Jurassic Park trilogy with a new series of films: Jurassic World. He plays velociraptor tamer Owen Grady, a former member of the Navy, and holds his calm as the new dino park has an all too familiar breakdown. While I still contend that he could have put that knife to use once or twice in the course of the movie, Pratt holds his own as an action hero. And he has a way with the ladies, keeping his ‘raptor pack in line while also winning the girl in the end.

As a Texan, I can’t not mention Chris Pratt in a Western. I just can’t. In The Magnificent Seven, Pratt plays Josh Farady, a cocky, gambling, gun-for-hire helping his employer seek revenge. Seriously, yes. I honestly can’t say much about this film because I haven’t seen it all the way through. (Look, I was busy when it was in theaters and I haven’t gotten around to buying it yet. But I will). But just look at the trailer below, will you? Sure, Star Lord can handle his own Quad Blasters in Guardians, but an honest-to-goodness gunslinging Chris Pratt? /swoon

Aside from being part of a crew, Pratt can carry a movie all by himself. Well, kind of. Have you seen Passengers? In it, he is a solo, stranded interstellar travel passenger. He finds himself the only one awake on what was supposed to have been a 120-year long sleeping voyage. His interactions with the robot bartender? His personal dilemma on waking up author Aurora Lane (Jennifer Lawrence)? Pratt brings so much emotion to what could have been a dull movie. And then, when he does wake up Aurora…well, there comes a whole new challenge of working to win her heart, repairing the heartbreak he causes, and fighting to save the ship. 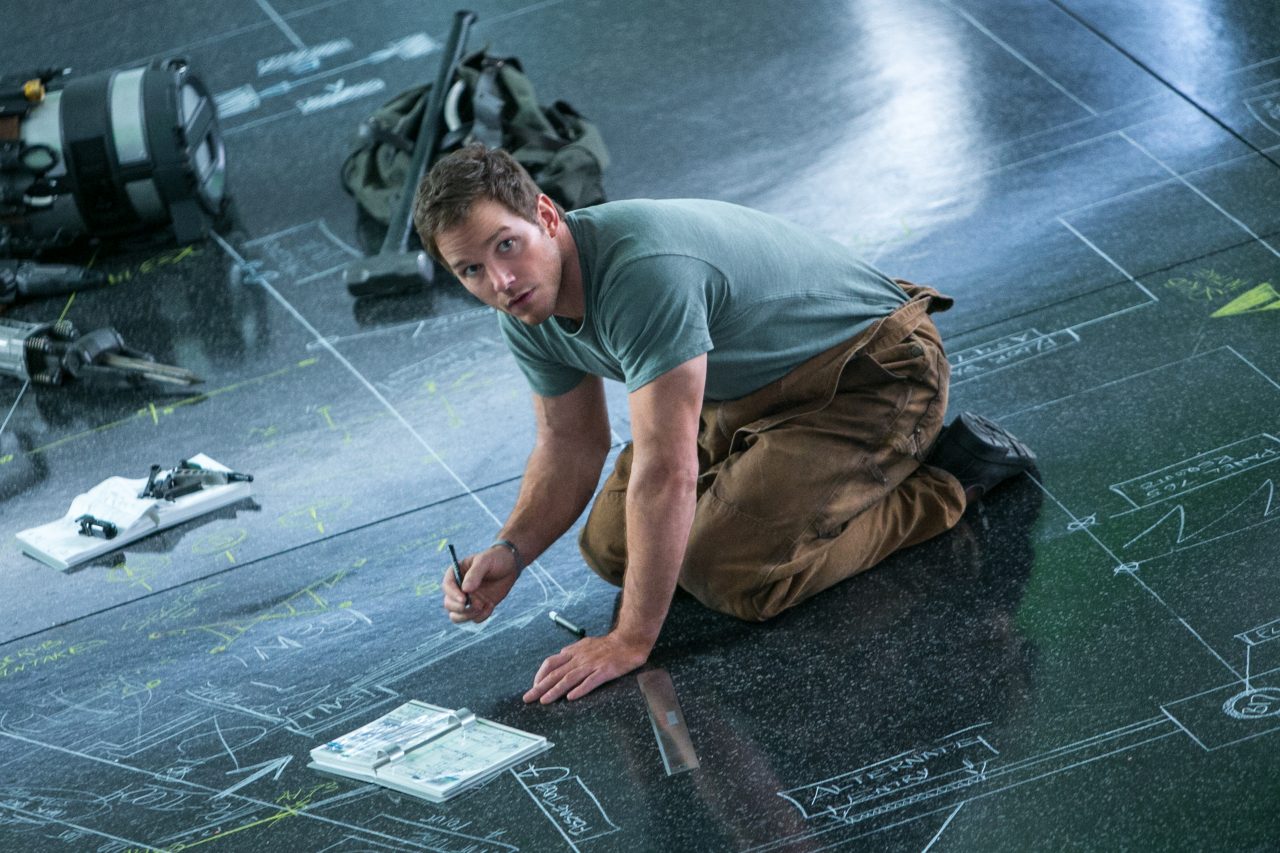 Pratt has also played a role that speaks to the kids and those that are kids at heart:  Emmet Brickowoski, the prophesied “chosen one” in The Lego Movie. It may have been just a voice over, but it takes skill to draw people into a character with just your voice. Speaking of Lego, Chris Pratt also reprised his role as Owen for the Lego kid’s short version of the new dinosaur film: Lego Jurassic World.

One last thing of note: Chris Pratt is genuinely a sweet guy. He is very prolific on Instagram and, during the run up to Guardians of the Galaxy Vol 2, controversy struck when he created a video telling people to stop reading the captions and turn the volume up, dropping all captions and breaking into a quick mashup trailer for the film. Visibly upset and concentrating hard on his apology, Chris Pratt uploaded a silent apology in sign language for the deaf and hard of hearing community that relies on those captions to navigate the internet’s vast video construct:

Sure, there have been other films and shows for Chris Pratt, his IMDB is full of his continuous work since about 2000. If there is anything in his background that you think should have been highlighted, let me know.

Up Next for Chris Pratt: