Welcome to the tenth edition of GGA Ready Room! Let’s take a look at what Star Trek news we missed last week, shall we? As a reminder: the standard date for the post will be shown in the title but the week being recapped (September 03 through September 09 in this case) will be shown in the main header in Stardate format as calculated by ST:Online – this calculator will be used since there is not a standard format across all the television shows and feature films and it is easily accessible.

With so much having happened last week, look for a supplementary GGA Ready Room later this week with additional tidbits!  (More specifically, a look at the official ST:Discovery countdown that has begun!)

GGA celebrated #StarTrekDay on Twitter for the 51st anniversary of the very first episode of Star Trek: The Original Series! How did the rest of the internet celebrate Star Trek Day? Well, just take a look:

TODAY IS #STARTREKDAY! Share with us your fave Star Trek episode or what #StarTrek means to you! We'll retweet all the Star Trek goodness! pic.twitter.com/tuJrvN7NgQ

On #StarTrekDay & every day, it's the best message there is. Thank you, @WilliamShatner! https://t.co/7KfImjB9i0 pic.twitter.com/ZoNU6aFdeD

Happy #StarTrek day! Many thanks to the pioneers who changed my life, and the lives of so many others. #StarfleetBadassery is 51 years old! https://t.co/B3hK4JkHWJ

(Mary Chieffo is a stunt double for Star Trek: Discovery!)

It seems Mark Hamill got in on the action, too, with the help of LeVar Burton (Lieutenant Commander Geordi La Forge, ST:TNG)

TONIGHT: @SonequaMG is boldly going where no @startrekcbs star has gone before: #LSSC! PS: She brought along a sneak peek at the new show! pic.twitter.com/YyQBageZkB

The perfection of the Vulcan salute from @SonequaMG. #LSSC pic.twitter.com/kHcPDNWRlu

Noticed the quote for this month on my @StarTrek calendar that I keep at work. pic.twitter.com/B6uOIlkIyz

Is Star Trek really a science show, or just sci-fi fun? This @NASA article explores just that on #StarTrekDay! >> on https://t.co/g4rVqfzqmd pic.twitter.com/bCYs8hbUOg

Today’s #FanZone feature is GGA’s very own Audrey Kearns! Our fearless leader is a Trekkie to her core and she welcomed me to GGA with open arms and gave me free reign over GGA Ready Room! 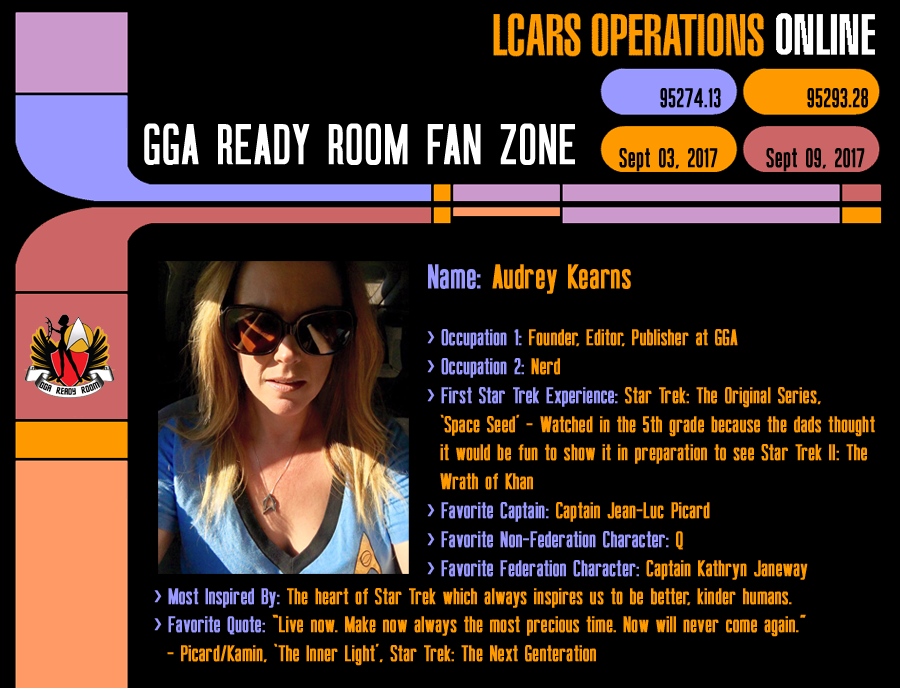