Home » TV & Streaming » GGA Into the Arrowverse: A Revolution Is Brewing on Black Lightning

GGA Into the Arrowverse: A Revolution Is Brewing on Black Lightning

Welcome to Geek Girl Authority’s Into the Arrowverse. Each week we recap the weekly episodes of Arrow, Supergirl, DC’s Legends of Tomorrow, Batwoman, and Black Lightning. And preview the next episode. Since GGA provides full recaps of The Flash, only The Flash preview will be featured in this column.

DC’s Legends of Tomorrow will returns January 21, 2020. We will cover that show after it premieres. All images and videos courtesy of The CW.

Warning: Spoilers ahead for all of the Arrowverse shows. If you haven’t watched the latest episodes, stop reading now. Otherwise, continue reading.

The Arrowverse’s own Caped Crusader, Batwoman (Ruby Rose) and the Crows are on the hunt for a man who calls himself the Executioner.  A killer who uses methods of capital punishment on his victims, hence the name, the Executioner. During their first encounter with the Executioner, Sophie (Meagan Tandy) reveals that she knows Kate is Batwoman.  Oh and Sophie was shot and put into Mary’s (Nicole Kang) care at her secret clinc.

The Executioner is out to expose the corruption of GCPD. It turns out a detective on the force is working with a judge to target brown and poor people for crimes they didn’t commit. The Executioner is the actual prison executioner.  And he’s right because Batwoman catches the judge destroying evidence. His story ends with his death, courtesy of Jacob Kane (Dougray Scott), but the damage was done to the GCPD.

Alice (Rachel Skarsten) sends Mouse (Sam Littlefield), in disguise, to retrieve a bullet that will penetrate the Batsuit. That bullet is being made at Catherine’s (Elizabeth Anweis) company, Hamilton. Mouse doesn’t really like that Alice is using him. He questions Alice’s loyalty to him. What is she up to?

Next time on Batwoman, “Tell Me the Truth”

Kate and Sophie must reconcile with their past as Kate questions just how much she can trust her former lover.  Kate and Luke have an encounter with an old friend.

The DEO caught Rip Roar (Nick Sagar) last week and Leviathan wants him back. They sent in Andrea Rojas (Julie Gonzalo) to retrieve him, but Supergirl (Melissa Benoist) was able to stop her.  Yeah, you read that right. Andrea broke into the DEO. She has superpowers that makes her a shadow person. Because she failed to get Rip Roar, Andrea turns to Lena Luthor (Katie McGrath) for help.

Lena and Andrea have a long history together.  They met at school, became best friends, and share many secrets.  When Lex (Jon Cryer) turned bad and started finding ways to kill Superman, Lena tried to find a way to stop him without hurting him.  She found research about a medallion that bestows good luck on the beholder. Andrea went with Lena to find the medallion.  The medallion found Andrea.

That’s when Leviathan appeared to Andrea, giving her the medallion.  Soon after, her father’s business skyrocketed and she met Russell Rogers.  Leviathan eventually came to collect on their generosity and Andrea discovered her powers. Russell got suspicious of her whereabouts. She didn’t tell him, but it was enough for Leviathan to step in, take Russell and turn him into Rip Roar. Lena also found out that Andrea had the medallion and ended their friendship.

Back to present day, Lena helps Andrea, but Leviathan is one step ahead of her and kills Russell. They let Andrea leave their service, but they will take everything away from her in the process.  Lena takes the medallion, but there’s no magic left in it.

Next time on Supergirl, “Tremors”

Supergirl finally learns the truth about Lena while tangling with Leviathan. J’onn J’onnz (David Harewood) makes a discovery about his brother’s whereabouts

Things are getting really bad for the residents of Freeland. Since the ASA’s occupation, a lot people have gone missing. Anissa (Nafessa Williams) as Blackbird is on a run to the farm house. One of the boys at the farmhouse, Tavon (Jasun Jabbar Wardlaw, Jr.) is not a meta, so Blackbird takes him back to Freeland.  Unfortunately, Painkiller (Jordan Calloway) is on Blackbird’s trail. When she encounters him, it’s Trevon who pays with his life.  While she’s away, Odell visits her home.  Grace (Chantal Thuy) shape shifts into Anissa to keep Odell from confirming that she’s Blackbird.

The high school hears about Tavon’s death and they are M-A-D.  The ASA guards enforce their authority trying to stop a protest. Jefferson Pierce (Cress Williams) steps in to protect the students.  The ASA guards gang up on Jefferson, beating him up in front of the entire school…including.  Jennifer (China Anne McClain)

Jennifer is upset and to prove that he’s on her side, Agent Odell (Bill Duke) suggests  she gets back at the ASA guards and tells her where to find them.

Lynn (Christine Adams) found a way to stabilize the meta gene, but she needs an enzyme to to synthesize it. The only person with that enzyme is Tobias Whale (Marvin Jones III).   But first, she has to give him the serum that makes him young.  Throughout the procedure, Tobias taunts Lynn about killing Jefferson. She retaliates by extracting his bone marrow without anesthesia.  Later she tells Odell that Tobias has to die.

Henderson (Damon Gupton) gathers the leaders of the different Freeland factions together to unite.  He says the only way they can beat the ASA is to fight together, with help from Blackbird.  Looks like there’s going to be a revolution in the Arrowverse.

Next Time on Black Lightning, “The Book of Resistance, Chapter One”

Jefferson is torn between his loyalty to his family and his commitment to saving Freeland.  Meanwhile, Anissa’s commitment to Grace is deepening. Lastly, Jennifer makes an interesting discovery. 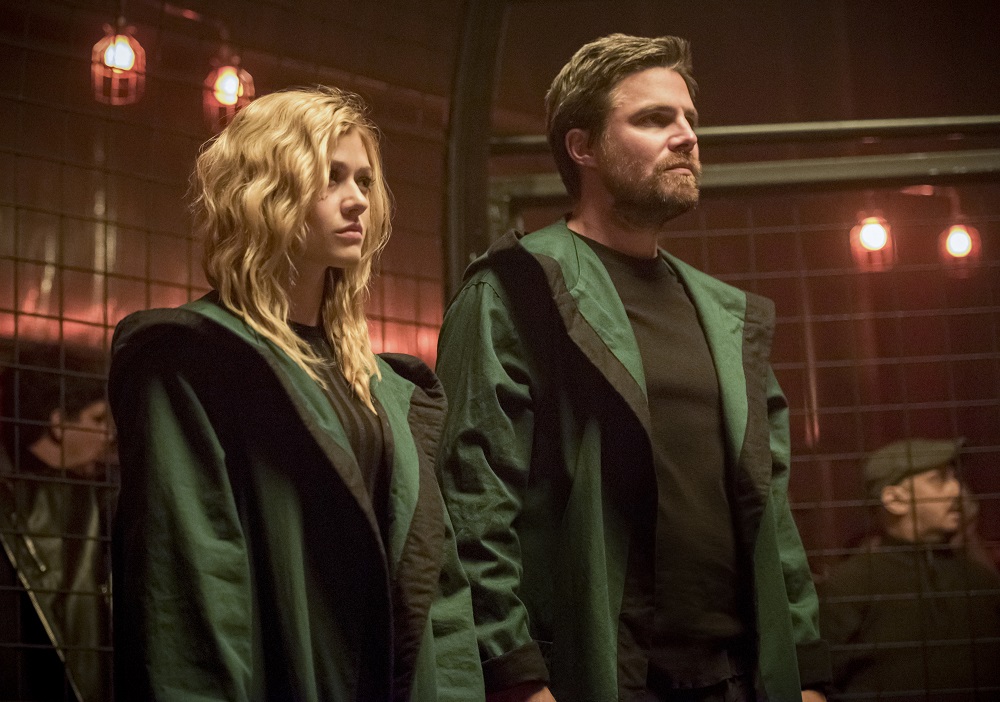 Arrow was on a break this week in the Arrowverse.  Here is the synopsis and trailer for the next episode.

Upon learning the key to oppose The Monitor (LaMonica Garrett), Oliver (Stephen Amell) and team return to Russia on a mission to gather the necessary materials.  Connor (Joseph David-Jones) reunites with a figure from his past.

Arrow was on a break this week in the Arrowverse.  Here is the synopsis and trailer for the next episode.

Barry (Grant Gustin) turns his attention to prepping Elongated Man (Hartley Sawyer) for life after Crisis and without The Flash, but Ralph ultimately teaches Barry a lesson. Meanwhile, Cecile (Danielle Nicolet) faces her own moment of self-discovery while helping a recuperated Chester P. Runk (Brandon McKnight) reclaim his identity.

Check out Geek Girl Authority’s Coverage of the Arrowverse Here