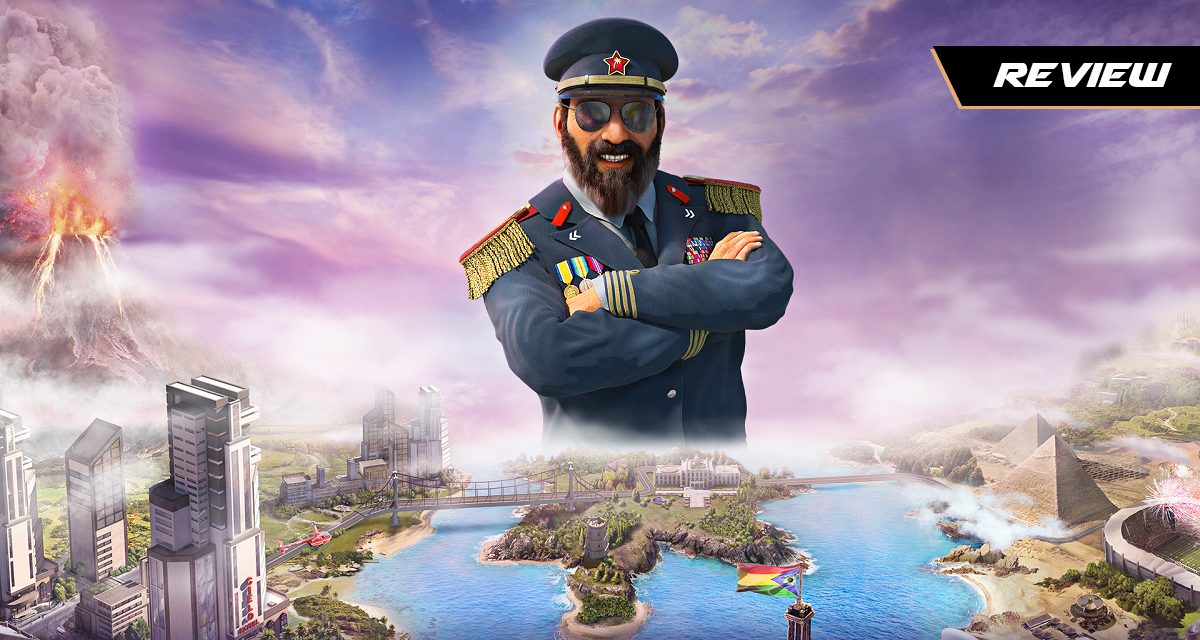 As someone who loves the SimCity games, the idea of Tropico 6 appealed to me. So I eagerly jumped into the big shoes of El Presidente, ready to lead my small island nation from the Colonial Era to the Modern World.

Limbic Entertainment’s Tropico 6, released on March 28, 2019 for Windows and Mac, is a complex game, where the economic decisions you make can be the life or death of your country, and the happiness of the people determines whether you get to continue your rule. And not only do you have to make your people happy, but you have to make the different factions happy. Want to declare your independence from the Crown? Then side with the Revolutionists. Want to side with the Allies? Then you must go against the Axis. Are you a Communist, Capitalist, Militarist, Environmentalist or Intellectual? The choices are all there for you.

The Beautiful Home of El Presidente

The visuals in this game are reminiscent of any SimCity game you might have played where the buildings are well-detailed, and the citizens are little more than walking human-like shapes when viewing the game in Archipelago view. As you build your country, you can see that city life is busy, with people walking to their jobs, Teamsters transporting goods to the docks and to the factories, and ships going in an out of harbor at lightening speed.

Fortunately, you are not stuck with just one island map. In the Sandbox mode, you have a choice from a variety of island maps. The one I played on was Destrozado, which was one large island surrounded by smaller islands. It was a tropical paradise of hills and forests and it was a perfect place to rule my land with a well-intention fist.

The boxes over the buildings is not a sight you want to see.

Even after completing the rather long tutorial, I still found myself fairly confused by the economic system once I started playing. About the only thing you can do when first starting out is exporting goods, and the only way to do that is to have Plantations and Ranches to produce food and resources. Creating trade routes with the Crown and with Smugglers is how you earn money, so I had to make that I was checking potential routes constantly and producing enough crops to fulfill export contracts. It was logistically challenging but after 16 hours put into the game and several map restarts, I think I know what I’m doing now.

And the economy isn’t the only thing you have to concern yourself with. There are also factions who constantly place demands on you that you have to meet. Like Tropico 5, there are 4 eras in this world that you progress through: Colonial, World War, Cold War, and Modern Times. To get out the Colonial Era, you have to get the backing of the Revolutionists, but since you are on a 6-year Mandate from the Crown, you have to make sure your addressing their needs as well so you can get a time extension. This means that you have to know when to accept requests from either faction and when to say no. You also have to be smart about what reward you take from them (time, money, immigrants, blueprints) because that will be important to your long-term plan of independence and growth.

This is all to say that this game can get overwhelming very quickly. I spent a good amount of my time in the Colonial Era and I got rather used to the simple life of growing crops, making trade routes, going on Pirate raids, building bunkhouses and taverns, and completing the occasional research project in the Library, but the jump from Colonial to World War is a bit shocking if you are not ready for it.

Once I got into the World Wars, everything became much more difficult. I now had to deal with edicts that determined the direction I wanted to take the country. There was more research to do, more factions to deal with including the Communists, the Militarists, the Religious groups, and I had to create an alliance between either the Axis or the Allies. There were factories to build, a Broker to talk to, and I had to start thinking about expansion into the other islands. In short, El Presidente was incredibly busy. 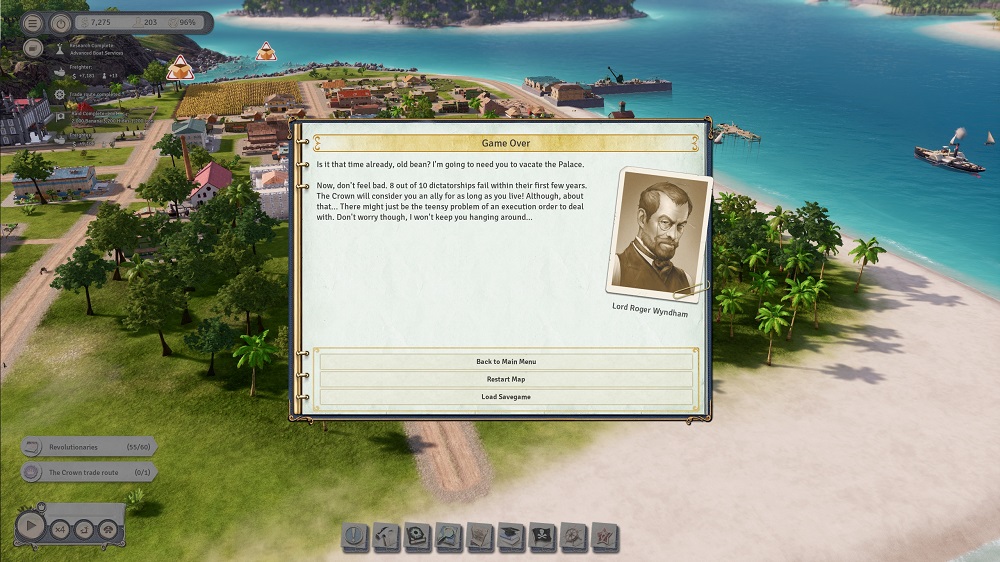 When the Mandate in the Colonial Era ends, so does the game.

The narrative in this game is a bit lacking in the Sandbox mode and that’s okay. For me, these types of games do not need a long complicated narrative story to keep me interested. As the Governor, I knew what I had to do and I knew who I had to join. When I hit the World Wars (finally) I knew I had to side with Allies in the World War. But these were easy political decisions to make.

The narrative became my own creation. I wanted to be a benevolent leader looking out for the people. I decided to allow all the people to vote regardless of wealth. I went with a Pacifist country instead of a militarized one. I’m currently doing my best to fulfill Communists requests and ignore the Military. My island nation is economically stable, the trade is good, there is no unemployment or homelessness, and the people are reasonably happy (I could probably build more taverns and a circus or two). But I won my first election, and so the reign of El Presidente continues!

If you are looking for a more story-driven experience, this game does have a Mission mode, which follows the story of El Presidente and your loyal aide Penultimo. These 15 missions have specific conditions that must be met. For instance, in the first mission “Penultimo of the Caribbean” focuses on smuggling, logistics, and proclaiming independence.

Tropico 6 is a great game for people who love challenging city simulator games and the stress that comes with managing a growing nation. If you have ever wanted to be the leader of your own Banana Republic, then this is the game for you. With distinct eras to play through, rebellions to quell, alliances to make and an economy to strengthen, this is a fast-paced game that will require you to multi-task. This game can be very overwhelming at times and even though you can complete tutorial, it still doesn’t prepare you for what you will face once you’re in the thick of it. Trying to find a balance between growing the economy, focusing on the people, and planning for the future can be a little frustrating and there are a lot of potential ways to be voted out.

In other reviews I’ve seen, there are a couple of similarities regarding some of the cons for this game. One is the economic system and how confusing it can be and they are right about that. One day you could be rolling in the money and the next day you find yourself in a deficit and you have no idea how it happened. Are you workers getting paid too much? Are your producing the wrong crops? Are your trade routes not paying you enough?

The other con I’ve seen is the soundtrack. It is true, you do hear the same Caribbean-inspired tracks throughout your entire time playing the game. The trumpets and the high energy Latin beats are great at first, but over time, it can get to you. Fortunately for me, I started drowning out the music with my own self-talk about what I needed to do with my island. That helped.

Despite the sometime frustrating economic system and the lack of musical variety, this is one of the better games I’ve played in the last few months and it held my attention for hours. If you love SimCity, then you owe it to yourself to pick up this game when you can. Love live El President!

Tropico 6 is available now for Windows, Mac, Linux, and SteamOS. It will be released for PlayStation 4 and Xbox One later this year.

This is a booming economy. For now.

If I have any parting advice gained from my 16 hours played and 4 map restarts, it’s these key points:

Video Games Editor and Senior Contributor at Geek Girl Authority
As a Senior Contributor for GGA, I'm able to write about the things I love the most: geek culture and video games. I've been gaming since the 1980's and to see the evolution of games has been amazing and inspiring. What a time to be a gamer!

As a Senior Contributor for GGA, I'm able to write about the things I love the most: geek culture and video games. I've been gaming since the 1980's and to see the evolution of games has been amazing and inspiring. What a time to be a gamer!

The latest trailer for Saint Maud is terrifying in all the right ways.
https://www.geekgirlauthority.com/the-new-saint-maud-trailer-is-terrifying-in-the-best-ways/

Netflix is really on a roll with their fantasy series. They released the new trailer for The Letter to the King and it looks terrific! It airs on March 20, will you be watching? https://www.geekgirlauthority.com/netflix-dropped-the-trailer-and-release-date-for-the-letter-for-the-king/

Strange things are happening on this week's episode of #TheFlash! Check out our review to keep up to date! https://www.geekgirlauthority.com/the-flash-recap-s06e13-grodd-friended-me/

It's #WomanCrushWednesday! Today we crush on #TheG